After recovering Gromph Baenre grimoire, the PC’s were somewhat injured after all the fights in the way to Baenre’s inner sanctum.

Stepping outside of Gromph’s office, they were approached by a shady drow in spellcaster’s garments. “I’m with the council of spiders”, he said with slithery elven. The drow explained that since Grim’s betrayal, the city’s authorities were in the know about  them, and were currently surrounding the tower. But there was a way out; he said that several stories below, there was a chamber that hid a magical crystal, this contraption was the source of the teleportation lockdown; if it were destroyed, nothing would stop them from teleporting away in a split second.
They went downstairs, the Druid protected their pass with magic, making them difficult to detect. Drow authorities knew already that the place was a sensitive asset. It was heavily guarded by a patrol of drows, some spiders and a priestess of Lolth. They did their best to stop the intruders but died in the process. After the crystal was damaged they teleported back to Araj and gave Vizeran the grimoire. 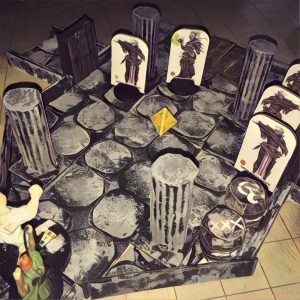 Vizeran started the ritual while the PC’s went back to Gauntlgrym and some other places to recruit as many allies as they could. When they were ready, they had a small army composed of a lot of humans, a squad of elite dwarf fighters led by Eldeth Feldrun. Basidia gave them 40 miconids and some quaggoth spore servants. The Giants, Dorhun and Rihuud were there too. A pack of wererats from Blingdenstone. Sark Axebarrel and Burrow warden Jadger and some of his ghosts. Nomi Pathshutter and Yantha Coaxcrock were there too.

When the ritual was complete, Lord Zelraun opened a portal right into Menzoberranzan’s marketplace. They went through it and the surprised drow immediately prepared to make a stand, but seeing the size of the army, quickly fled to leave this to the city  matrons.

They waited for a few minutes, there was a build up of static in the air, it became so dry it was difficult to breath. Sparks and micro lightning started to appear out of thin air, and then, giant rifts in the fabric of the world tore the sky apart. Hundreds of them all over the city, and from them, armies of demons and undead poured out. The heroes saw Demogorgon fall from a rift a few blocks away. Their mission was to be close to him and Orcus and wait for one of them to lose the battle.

They moved slowly through the city, a lot of places were in ruins or recently destroyed by demons. Drow were everywhere, finding a way out of the city, trying to defend it and some of them, fighting with their former slaves who took the opportunity for mutiny.  It was not a joyful sight. The ugliness and gloomy sadness of war pervaded Menzoberranzan.

The heroes and their motley platoon fought bravely against hordes of fiends and undead. The cleric had only to raise her holy symbol and scores of undead would turn to dust. The druid commanded fire, ice and the power of beasts to make his way through the streets. The renowned fighter, wielding Yennoghu’s cursed flail had an unfair advantage against the demons. Derendil was still with them shooting arrows from the back.

After killing a woman demon with six arms and a giant snake as a body, they came face to face with Thalasskoptis, the prince demon of the depths. A mass of writhing tentacles with a feral child’s face hiding underneath. No one knew that this demon prince was in the underdark. It was a blood bath. Being a demon prince, only magic and Yennoghu’s flail could damage it. Several lives were lost to the monster’s tentacles, after the battle the heroes started to question the plausibility of their quest.

The climbed a flight of stairs and when they got to the high ground, the sight left them breathless. Menzoberranzan was in ruins, demons were all over the place destroying everything, killing everything. In front of them they could see Demogorgon and Orcus fighting. To their left, a few hundred meters away, there was a party of demons surrounding a single drow priestess. Two powerful Balors and some lesser demons approached her cautiously, trying to corner her. She raised her hand in an arcane gesture, and when it came down, all the demons turned to pale gray dust. Quentel Baenre was making her way out of the city.

The heroes finally came face to face with the demon lords, just in time to see Orcus lose the battle. Demogorgon threw Orcus’ limp body away from him. One of its heads looked to the sky and laughed with madness, the other head was staring directly at the heroes, getting ready to tear them apart. They noticed that Orcus’ wand was lying on the floor, and it was something they could use to battle the demon prince.   Demogorgon charged while the cleric used her most powerful spell, one that empowered her allies with sacred energy and protected them from evil. The fighter wielding Yennoghu’s flail lunched forward and they clashed like two meteors, however it was clear who had superior power. The fighter would not last long. The druid invoked the elemental power of the air and transformed into a creature made of wind and air. He flew upwards and fought Demogorgon from the air.  It was then that Demogorgon’s cursed gaze fell upon the cleric, a demonic stare that caused her mind and personality to fall apart. She was standing there almost still, you could see in her eyes that she was now stupid, unthinking. Her powerful enchantment faded.

The druid had to turn back to his original form to try to restore her mind with his nature magic. The fighter again was alone holding de prince of demons back. To keep him alive, his allies sacrificed themselves as bait for demogorgon’s frenzied attacks. Even Dorhun the stone giant crumbled to pieces protecting the fighter.  After the cleric’s mind was restored, she ran towards demogorgon’s feet and there, she took Orcus’ wand.  She felt a surge of power and hatred coursing through her arm and body. It was as if it communicated with her, and the message was “Destroy my arch-enemy and you shall be rewarded”.

With the power of Yennoghu’s flail and Orcus’ wand, the heroes had the advantage. Demorgorgon’s attack were still ravaging. But its defenses were now open and he was weak from the fight with its blood enemy. Moments later everybody was destroying Demogorgon the prince of demons, its heads roaring in rage and surprise as its body slowly faded and melted back to the abyss. It was over, but there had been a price paid in blood.

The fighter and cleric both showed their endless resolve when they beat their cursed weapon’s commands; they tossed them to the ground. The demonic weapons were then covered with cloth and put inside a chest, no one should ever touch them, lest they release the madness inside them.

Menzoberranzan was in ruins, but the drow’s retaliation would come soon. They heroes signaled Lord Zelraun, who promptly opened the portal and let the decimated army back into Gauntlgrym. Later on in a celebration with King Bruenor, the heroes were awarded lordships and lands, both in the surface and in Gauntlgrym itself. This celebration was a welcome rest after all the adventures in the underdark, a welcome truce, however, things were not over yet….


Vizeran deVir still had Gromph’s grimoire and no one wanted that, it was too big a risk to forget. Grazzt, the only demon prince who did not show up to Menzoberranzan, was still loose in the underdark.  Another adventure was just about to begin.

2 thoughts on “Out of the Abyss – Final Confrontation”