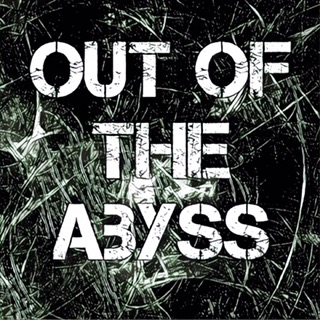 Chapter 16 in the book is the fetid wedding, but, if you’ve been following my guide, you know I switched the order of those two chapters. In my opinion it makes more sense to do it like this, but if you disagree, the chapter order in the book, works alright too.

After acquiring all the different ingredients and components to build the Dark Heart, Vizeran needs several days to build it. It is during this downtime that the PCs have to decide how they are going to go about slipping inside Menzoberranzan.

Their mission is to infiltrate the city, enter Sorcere (the spellcaster’s tower), get access to Gromph’s office and Inner Sanctum, obtain Gromph’s Grimoire, leave the Dark Heart, and finally get out. I will add an extra objective. The city is protected against teleportation magic since Demogorgon appeared. After retrieving the Grimoire, the PCs will have to the focus of the anti-teleportation magic, destroy it and teleport away (Since I suggested to allow teleportation magic for the second half of the adventure in Chapter 9).

Warning !  This chapter is very sandbox-y and presents many different options for approaching and how things work inside the city. Things can go in many different ways. I will present the most obvious action paths. The city can be approached in two different ways. Grin Ousstyl can lead them through a secret passage that gets them inside the city; or they can approach the city by land and probably face drow patrols on the way. PCs will probably choose the first option.

Once inside the city, things are tough, there are drow everywhere. They regard humans and the other races as inferior and will question their presence. However, one must remember that not all drow are fighters. Their culture is militaristic, hateful and suspicious, but the meat seller, a courier or a bard will hardly go out of their way to attack a group of adventurers. They will report it, that’s for sure, but it means not every street is a fight.  Unless the PCs have ways to pass without being detected, Grin Ousstyl can offer an idea: He can pretend to be a slaver, transporting a group of slaves from one part of the city to another. Not a really strong alibi, but it’s something to work with. A PC can do the impersonation if they have access to spells like Disguise self, or Alter self.

Once inside, the PCs can start making their way around the city. Menzoberranzan is divided in different sections. Each is described in the book. Each section has an encounter table, these encounters are really nice, the ones that can end up in a battle, are not really difficult. But that’s good, because all this chapter can go down in one day (in-game) since the PCs won’t probably have a chance to have a long rest. These small fights are here to start taxing the party’s resources. Getting to Sorcere unaided is pretty much impossible, this is where old allies and Vizeran’s allies come to help.

There are five possibilities for the PCs inside the city. Not all of them have to be explored.

Matron Mother Quenthel Baenre.- She is Gromph’s sister, person in charge of the city, and pretty much the most powerful being around. Respected and feared by everyone. She is surrounded by able bodyguards and warriors that she doesn’t even need, because she is a Chosen of Lolth and can cast level 9 cleric spells AT WILL.  So yeah… don’t even try to contradict her. She’s got spies everywhere and as soon as the PCs get themselves seen, she will send a small army of 30 drow to escort them for a private meeting. PCs will probably be super scared of this woman, since either Grin or Vizeran can tell them to avoid her. She will actually try to help, but only because she wants to clean House Baenre’s name. Her objective is the let them in, and then frame them as the ones guilty for the demon incursion. If the PCs are dragged this way, she will clear their entrance and no one will stop them. They have direct access to Gromph’s office. After exiting it, it’s a different story. Drow in Sorcere will try to arrest them under Quenthel’s orders. PCs will have to fight their way out.

Bregan d’Aerthe (Jarlaxle).- Bregan d’Aerthe is a mercenary company settled in Menzoberranzan, it has lots of power and influence, its leader is known as Jarlaxle. Jarlaxle is the other brother of Gromph Baenre, and currently, the only person that knows where he is (City of Luskan), but he won’t reveal this information (his relationship with Gromph and Quenthel, and Gromph’s location). As soon as the PCs get themselves seen, he will send a drow to lead them to the ruins of House Do’Urden (excited much?) where they have their headquarters. Jarlaxle wants to help destroy the demon lords, but if the PCs reveal their intention to place the Dark Heart inside Menzoberranzan, he will threaten to oppose them and will suggest they choose a different place. When it comes down to accessing Sorcere, Jarlaxle can arrange a meeting with a member from the council of spiders (see next).

Council of Spiders.- Some members of the council of spiders are Vizeran’s allies. Vizeran has promised to overthrow the control of the priestesses (remember drow culture is matriarchal), they know Vizeran’s allies are in the city but the best way to introduce this power group is through Jarlaxle. The council of spider’s member can provide scrolls of greater invisibility and the password for the tower defenses to turn off. They can also provide escorting (posing as slavers, or spellcasters bringing spell subjects or lab subjects).

Zhora Hallen and Hanne Hallen.- If the PCs ended up in good terms with them in the Wormwrithings,(reuniting them) then they can come back to help, as long as they don’t find out that the objective is to summon the demon lords to the city. Anytime the adventurers get into a fight on the streets, one of them can seen them and step in to help. Shooting from the dark. They can also offer a safe house and can offer an introduction to a powerful man, Jarlaxle.

Khelessa Draga.- She is a Lord’s Alliance spy impersonating a drow. She’s been missing for so long that Lord Eravien Haund asked the PCs to try to find her in chapter 8. The book doesn’t offer a way to incorporate her in the second part of the book. I suggest to add her as an agent of Bregan d’Aerthe. She can reveal her true self in private and try to exit the city with them.

Before actually going to the tower, Grin Ousstyl will break and confess that the Dark Heart doesn’t have to be placed in the city, it can be used anywhere. How your party reacts to this is really difficult to predict. But if they don’t want to change plans and Grin can escape. He will tell a priestess and a convoy of drow will intercept the adventurers in Tier Breche, before reaching Sorcere, this can be a tough fight. The adventurers might have the help of Bregan d’Aerthe forces, Zhora and Hanne, Khelessa or a council of spiders mage. You can even have two mini armies clash while the PCs get away to Sorcere.

Inside the tower, reaching the sanctum will be easy (if you use the map here, they just have to reach the main stairway in the second floor and go up to the fifth level). Investigating the office has its dangers since there’s a fire elemental and a stone golem that activate as traps (page 206). There’s also an Imprisonment spell trap in the wall that hides the entrance to the inner sanctum. There’s a possibility that a PC is removed from the game right here. If it happens, the diamond that imprisons this PC can be dispelled by Vizeran later on. The door leads to a demiplane that only has a labyrinth. After reaching the inner sanctum, there is a fun encounter with a yochlol demon. She is Lolth’s emissary to Gromph. He trapped her in a magic circle. She is in drow form and will try to convince them to free her; attacking them if they do so. In this room the PC’s will find Gromph’s Grimoire and the diamond imprisoning anyone trapped in it. The PCs can place the Dark Heart here, as instructed by Vizeran DeVir. 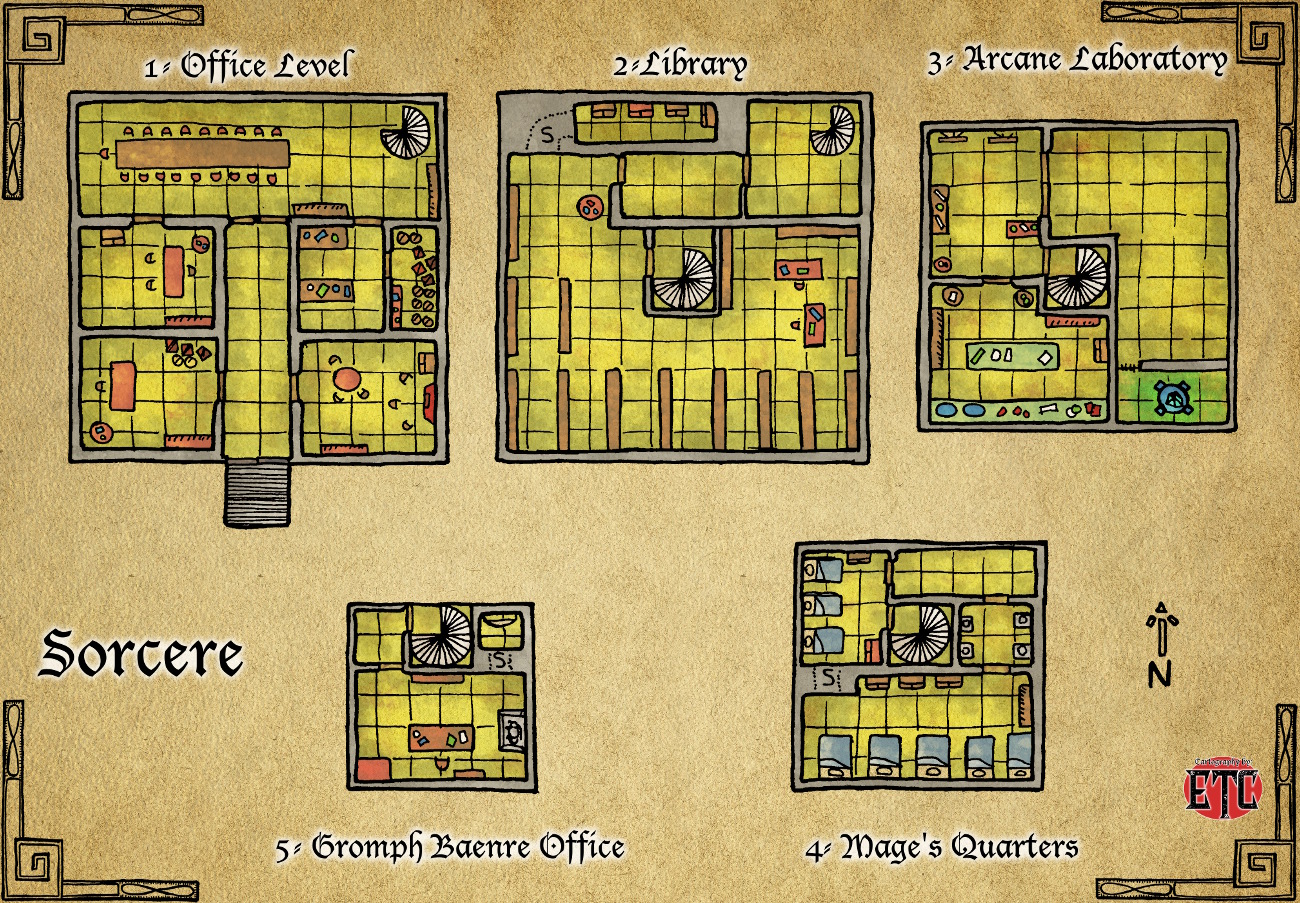 Getting out of Sorcere is no easy task since half the city might be after them, depending on how they got in. They need to find a way to turn off the anti-teleportation magic. The party’s resources will be low by now, but they are not alone, there’s many allies that can help. I suggest to have one or two encounters while going down the tower in search of the room. Two stories down, they will find the focus of this magic in the Arcane Laboratory level. The gem must be destroyed. But it is defended by drow warriors, giant spiders and priestesses. Depending on how strong and optimized is the party, you can have 2 Drow priestesses of Lolth (instead of just one). This must be the battle of the night. It can be super tough, since the only objective is to destroy the gem. After it is destroyed, the PCs can teleport instantly. If they don’t have access to this magic, a Council of Spider’s mage can teleport them out of the city.

After this, the only thing left to do is instruct Vizeran to start the ritual and get ready for the final showdown.