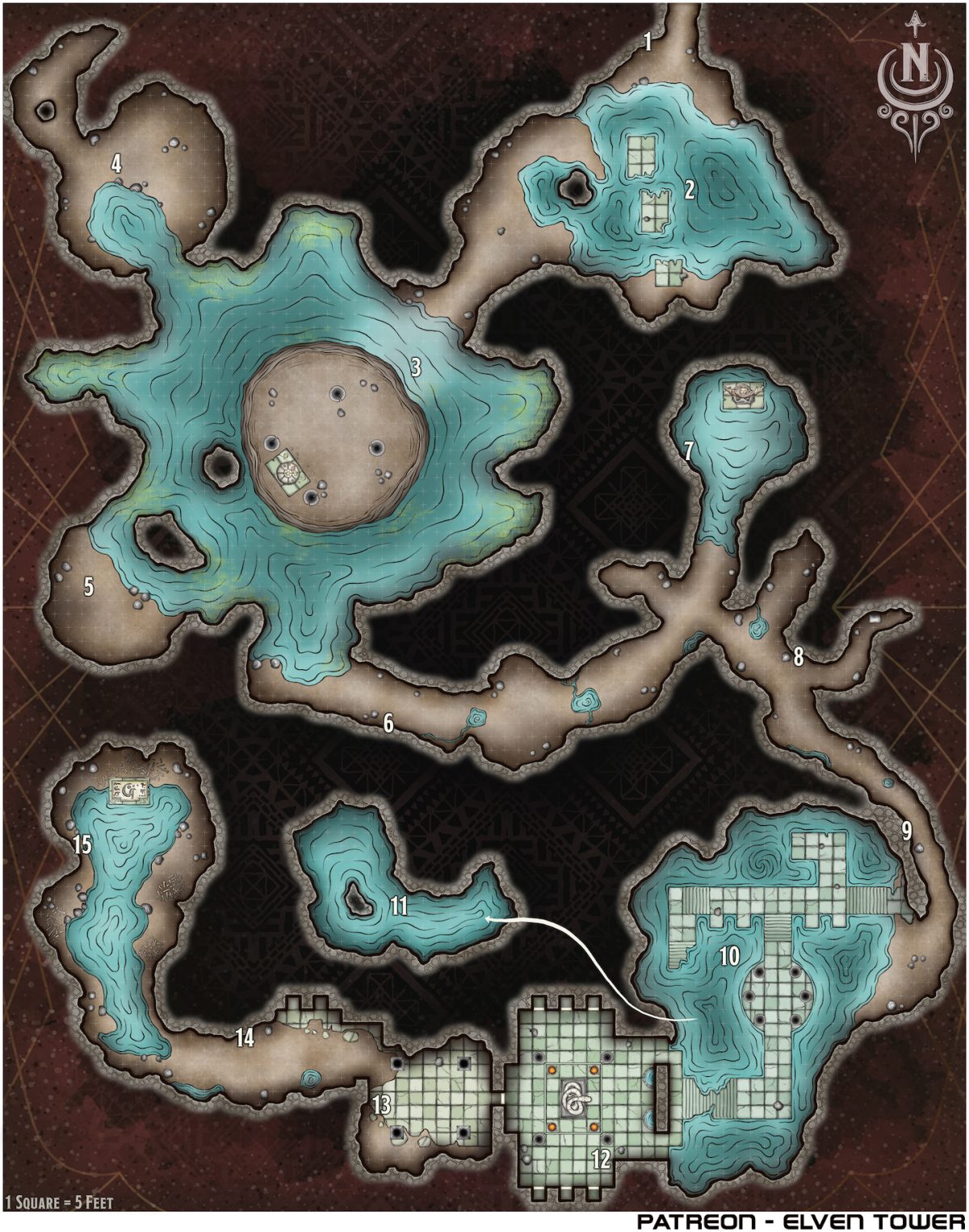 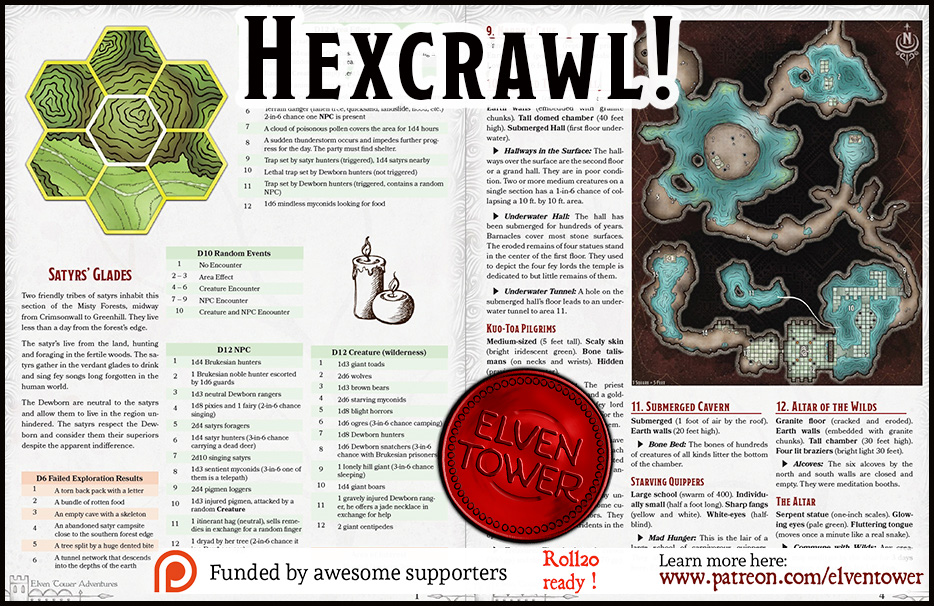 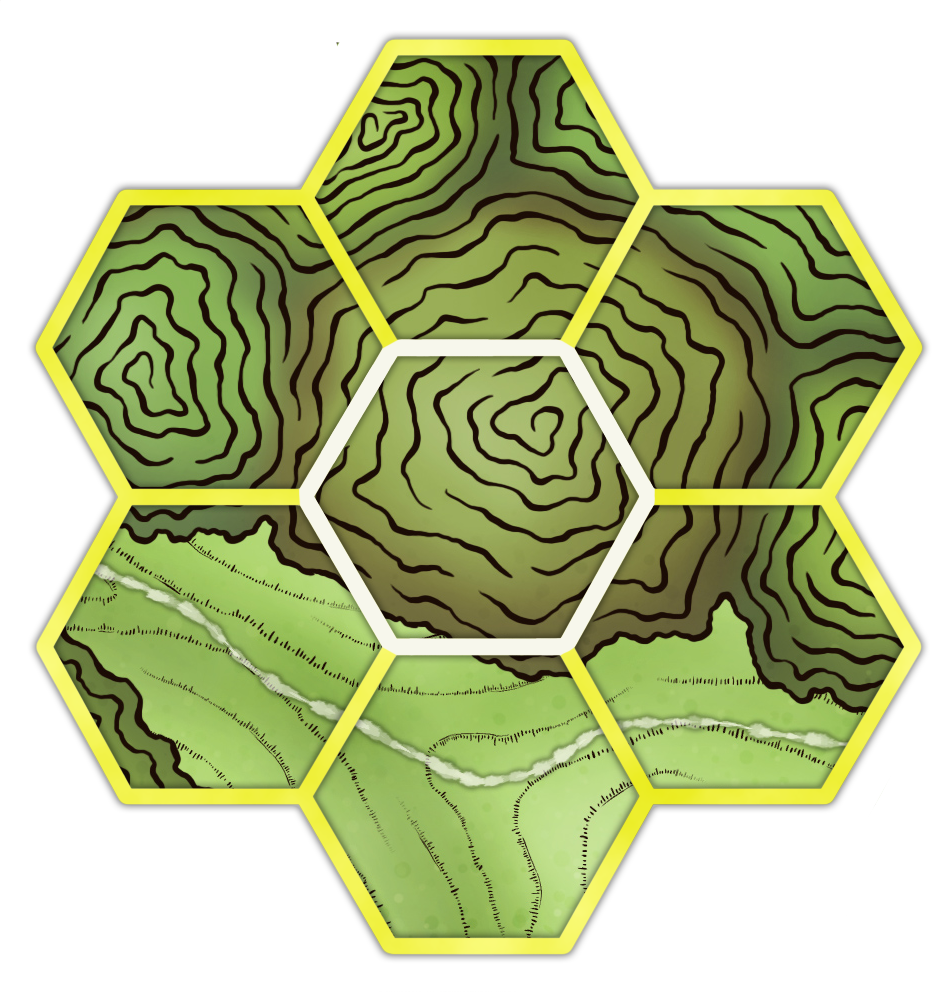 A forgotten ruin hides in the depths of the satyrs’ glades. The satyrs know of it but never come near it. An old song can be heard from the entrance from time to time. A song of pain, death, and despair. The satyrs do not understand the lyrics but are empathetically receptive to its message.

The Dewborn built the bygone temple eons ago and abandoned it when it flooded. An evil harpy lives there now.

The underground cavern complex is as old as the land itself. The Dewborn did not dig their temple out of the soil but instead took advantage of the already existing caverns.

The flooded ruin is the first temple they built when they settled down in the Misty Forests. It is a place of worship, meditation, and communion with the chaotic forces of nature.

The Dewborn worship entities from the Fey Realm in the same way that humans worship gods. The forces of nature in their plane adopt physical forms and manifest themselves with uncontrollable force. Things like the wind, verdant growth, fire, the tides, among others, become physical manifestations that ravage the land in neutral mayhem and destruction. These powerful beings are not evil, but indifferent to those around them.

To the Dewborn and other sentient denizens of the Fey Realm, they are the true gods.

The flooded temple was built as a place of worship and communion with four of those elemental forces: the tides, the fey, the wild, and the moon.

The Dewborn pioneers remained in the area for hundreds of years until the flow of a river changed after an unnaturally long rain season. The new path of the river caused the caverns to partially flood. The water swallowed half the temple and the erosion caused cave-ins in the underground complex.

The Dewborn priests decided, after months of interpretation, that this was a signal from the gods that their presence near the edge of the Misty Forests was not welcome. They moved to the northeast and started the construction of the Jade Palace.

Little remains of the once opulent temple. The ruin is a mockery of its original grandeur. Its riches were pillaged by adventurers and spelunkers long ago.

Ten years ago, an evil harpy named Tiaji moved into the temple. It ignores the satyrs because they are immune to its song. The harpy inhabits the north half of the ruined temple. It lures human travelers to her island, robs them, and eats them.

Terrain. There are three types of terrain in the flooded temple: cavern stone, temple floor, and the flooded areas.

Light. All areas are in complete darkness unless noted otherwise.

Harpy’s Song. The harpy’s singing voice has magical qualities. Any humanoid susceptible to charm spells and enchantments is affected by it. There is a 2-in-6 chance to become charmed when hearing the song. The victim follows the voice and allows the harpy to do as it wishes. If another creature tries to shake the victim out of the spell, it has a 2-in-6 chance to succeed each time they try.

Water. Schools of quippers live in the large bodies of water in the temple. There is a 2-in-6 chance they attack creatures that swim or walk across the water.

Smells and Sound. The stench of still dirty water combines with that of rot and decay from the harpy’s leftovers. The sound of slow-flowing water and the harpy’s song are discernible in the dark.

Altar of the Tides

Sandy Floor (no prints). Ancient Granite wall (with eroded paintings of the temple).

Humanoid statue (a mix of a Dewborn and an elf). Ceremonial garments (appropriate for a priest). Flowery engraving (all over the statue).