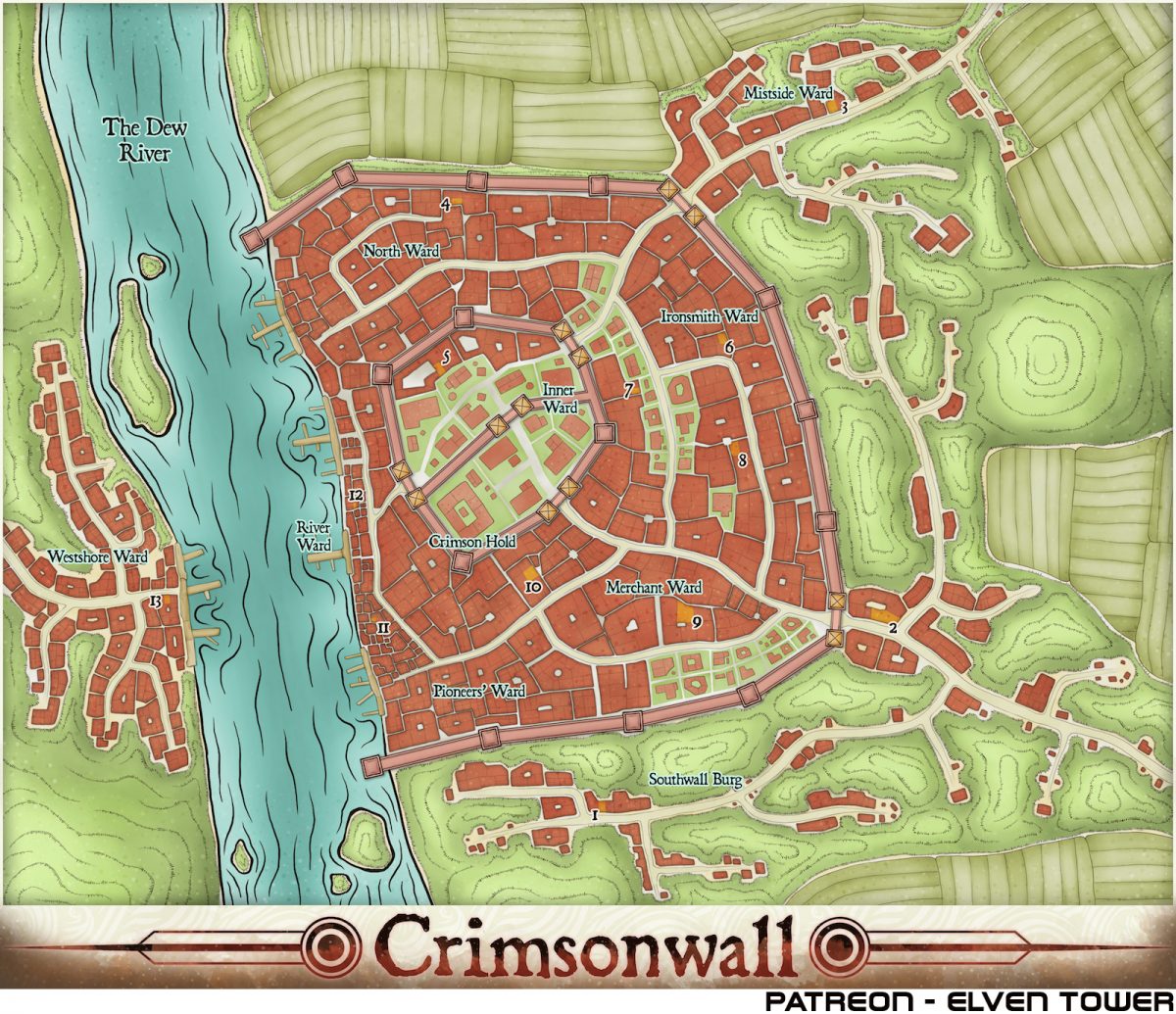 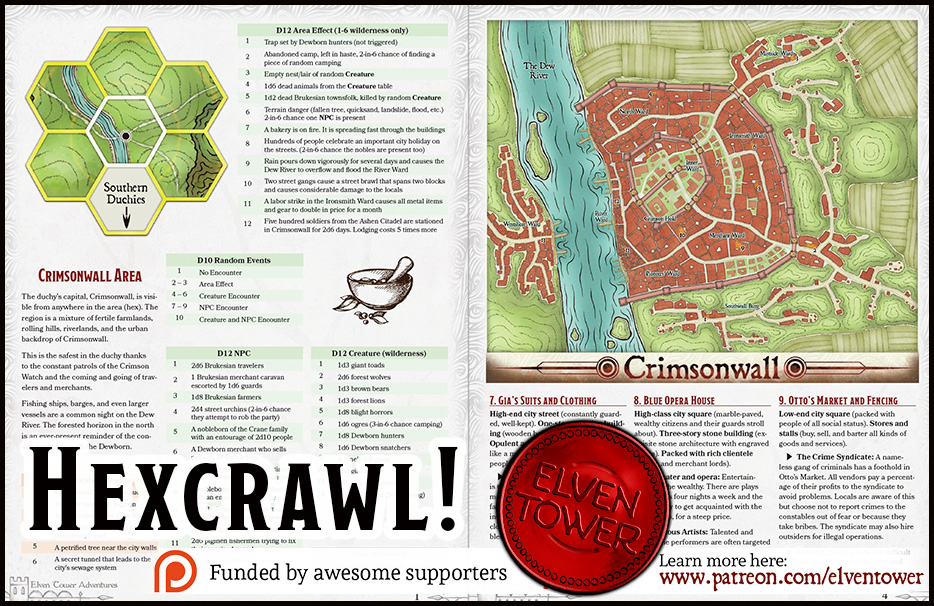 Some people call it the ruby in the north, others call it the grand bastion of crimson walls. But for most people, the name of the capital of the Brukesian Duchy is Crimsonwall. It is located south of the Misty forests, by the shores of the Dew River. Crimsonwall marks the border of the duchy’s territories; everything south of it is beyond its jurisdiction.

Two-thirds of the city hides behind the 30-foot-tall red-tinted walls. A few decades ago, only the poor and dispossessed would settle and live outside the walls. As time passed, however, the city grew and all kinds of people have settled in the outskirts of Crimsonwall.

To most citizens, an expansion of the walls is long overdue. It’s been a decade since the last time the Dewborn forces crashed against the city walls in an attempt at a large scale siege. Since then, the Dewborn employ guerrilla tactics and infiltration of a few individuals. The inhabitants of the external wards suffer the most from these confrontations.

The ruling class and the nobles have grown used to the relative peace they enjoy behind their tall walls. The city has grown exponentially as of late but a lot of the economic growth now occurs in the unprotected neighborhoods of Southward Burg, Mistside Ward, and Westshore Ward. If the Dewborn attacked with a large force again, the folks in those wards would lose everything. Even if the city repelled the attack, the economic costs of such confrontation would sink the local economy; a fact that the nobility seems to disregard.

Five out of the six noble families in the Duchy have a manor and other properties in the city (the Soto-Crag’s live apart in Brown Bog). The manors are all in the Inner Ward, protected by a second wall. The adults in these families enjoy a life of luxury and excesses. They drink the best wines and frequent the Blue Opera House as their place of choice for luxurious celebrations and parties. Their children are pampered, spoiled individuals who behave as if the whole world existed just to serve them. The city folks refer to them as the Brukesian Goldkids. They are nothing more than a gang of rich kids who do as they please around the city while their bodyguards and rich parents protect them from the consequences of their actions.

The locals have a love-hate relationship with these children and young boys and ladies. On one hand, they spend their silver coins like there is no tomorrow. On the other hand, their whims and improprieties have caused property damage and destruction all over the city.

Despite its size, Crimsonwall remains a close-knit society that gives importance to the responsibility of people’s actions. People are not only responsible for their deeds but also the ones of those around them. People are expected to report any crime, impropriety, or heresy they see to the chief tithing-man of their block.

Men of ages 7 to 60 are sworn subjects to Duke Crane. In their oath of loyalty, they swear to uphold the King’s Peace. In each block of Crimsonwall, all men are part of a tithing, and one of them is the chief tithing-man. They keep the peace, warn newcomers and visitors of the city laws, report any suspicious behavior, and arrest suspects or culprits when the occasion arises.

Any arrested individuals are brought before the ward constable. The constable has the authority to set bail or to imprison any individuals for a trial.

Some crimes are punishable by death if found guilty or if the suspect(s) is(are) caught red-handed by two or more witnesses. Such crimes are murder, robbery, arson, laying a hand on a member of the six noble families, and heresy. It’s important to note that in the case of aggression against a noble, no witnesses are necessary for judgment. In the case of heresy, the word of a priest of the Grand Solar Creator is enough to enact the punishment.

Population. Crimsonwall and the suburbs around it have a population of 14,000 people.

Government. Duke Albert Crane rules the city with an iron fist. The city council has authority on some minor matters but the Duke always has the last word. He is a loyal subject to the king in the south but the duchy is so far from the capital that the crown has little to no influence in everyday affairs.

Weather. Crimsonwall is in a rainy area of the duchy. The humidity from the Dew River amplifies the effects of heat and cold throughout the year.

Packed city street (scores of people looking for deals). One-story stone building (flat roof and large forge exhaust). Greasy and dusty (a layer of black grime on everything). Heat and smoke (from the roaring forge).

Low-end city square (packed with people of all social status). Stores and stalls (buy, sell, and barter all kinds of goods and services).

Well-traveled city street (stone-paved, high traffic). Two-story stone building (high stone pillars and a large statue of a Crane in the facade). Scholars and students (they move silently through the halls).