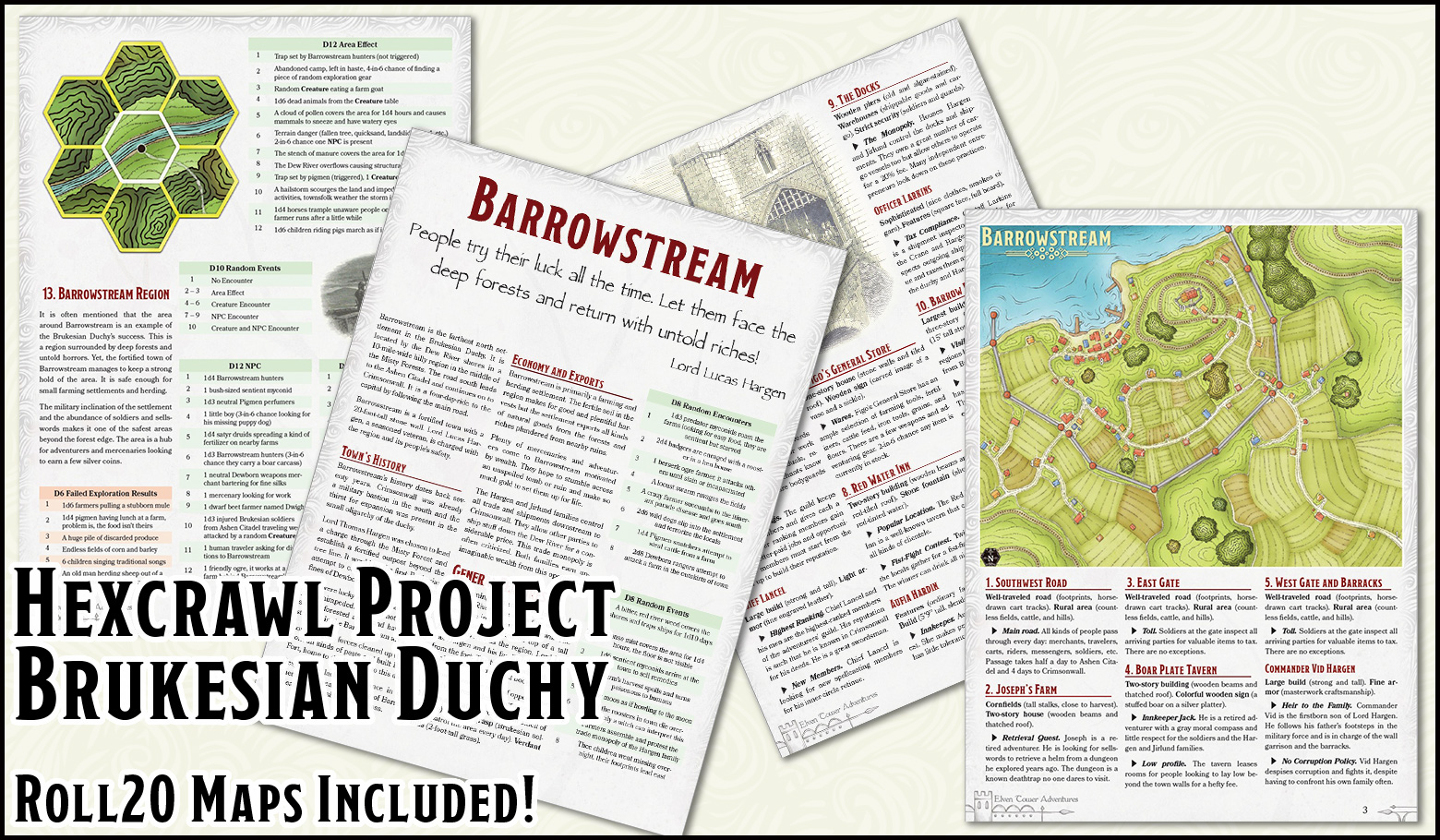 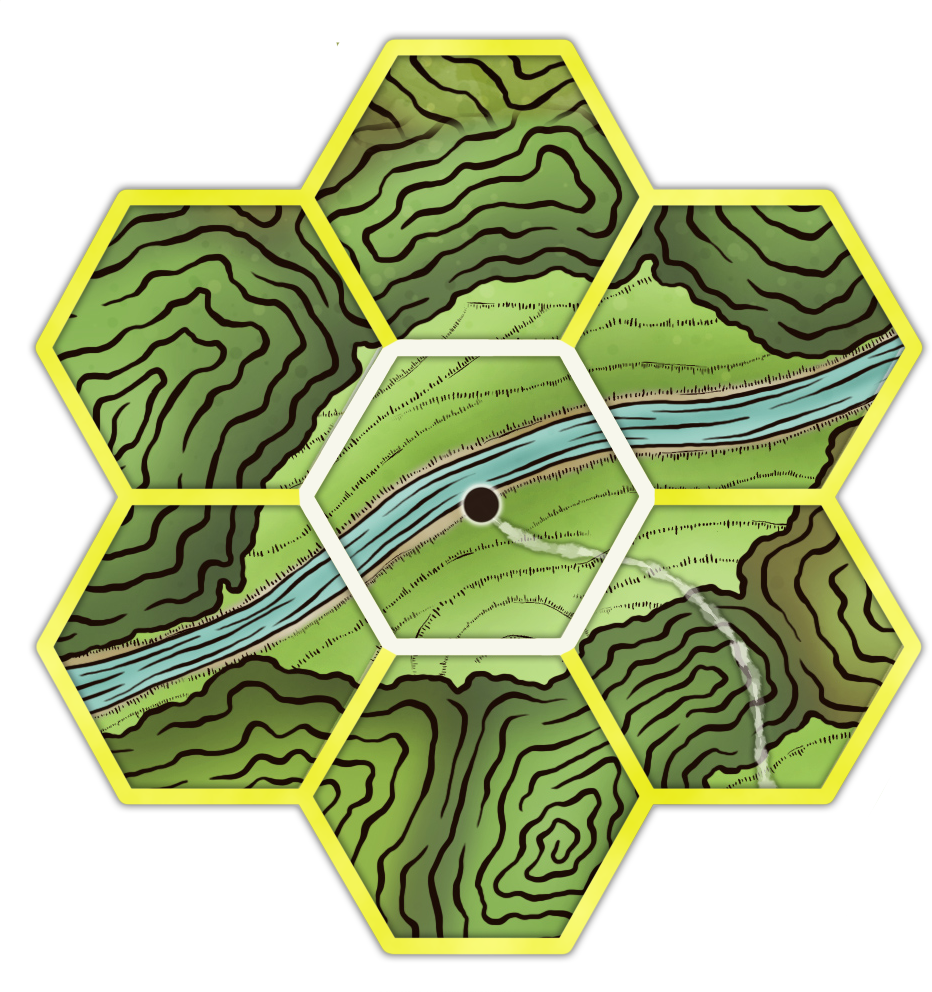 Barrowstream is the farthest north settlement in the Brukesian Duchy. It is located by the Dew River shores in a 10-mile-wide hilly region in the middle of the Misty Forests. The road south leads to the Ashen Citadel and continues on to Crimsonwall. It is a four-day-ride to the capital by following the main road.

Barrowstream is a fortified town with a 20-foot-tall stone wall. Lord Lucas Hargen, a seasoned veteran, is charged with the region and its people’s safety.

Barrowstream’s history dates back seventy years. Crimsonwall was already a military bastion in the south and the thirst for expansion was present in the small oligarchy of the duchy.

Lord Thomas Hargen was chosen to lead a charge through the Misty Forest and establish a fortified outpost beyond the tree line. It would be the first Brukesian attempt to conquer land within the confines of Dewborn territory.

They were lucky as the Dewborn let them pass unimpeded. They do not settle outside of forested areas and have limited strength in the Barrowstream area.

Lord Hargen’s forces cleaned up the area from all kinds of pests and built Barrow Fort, home to the Hargens to this day.

Despite the lack of resistance in conquering the area, the settling of Barrowstream was considered a success.

Barrowstream is primarily a farming and herding settlement. The fertile soil in the region makes for good and plentiful harvests but the settlement exports all kinds of natural goods from the forests and riches plundered from nearby ruins.

Plenty of mercenaries and adventurers come to Barrowstream motivated by wealth. They hope to stumble across an unspoiled tomb or ruin and make so much gold to set them up for life.

The Hargen and Jirlund families control all trade and shipments downstream to Crimsonwall. They allow other parties to ship stuff down the Dew River for a considerable price. This trade monopoly is often criticized. Both families earn unimaginable wealth from this operation.

The farming settlement is located by the Dew River shores. A stone wall surrounds the inner part of the town. The Barrow Fort is located on top of a tall hill that overlooks the region. Lord Lucas Hargen and his family rule the land from the fort. The town sprawls with unemployed adventurers and bodyguards.

Barrowstream, the town of opportunities and adventures, unless otherwise noted: 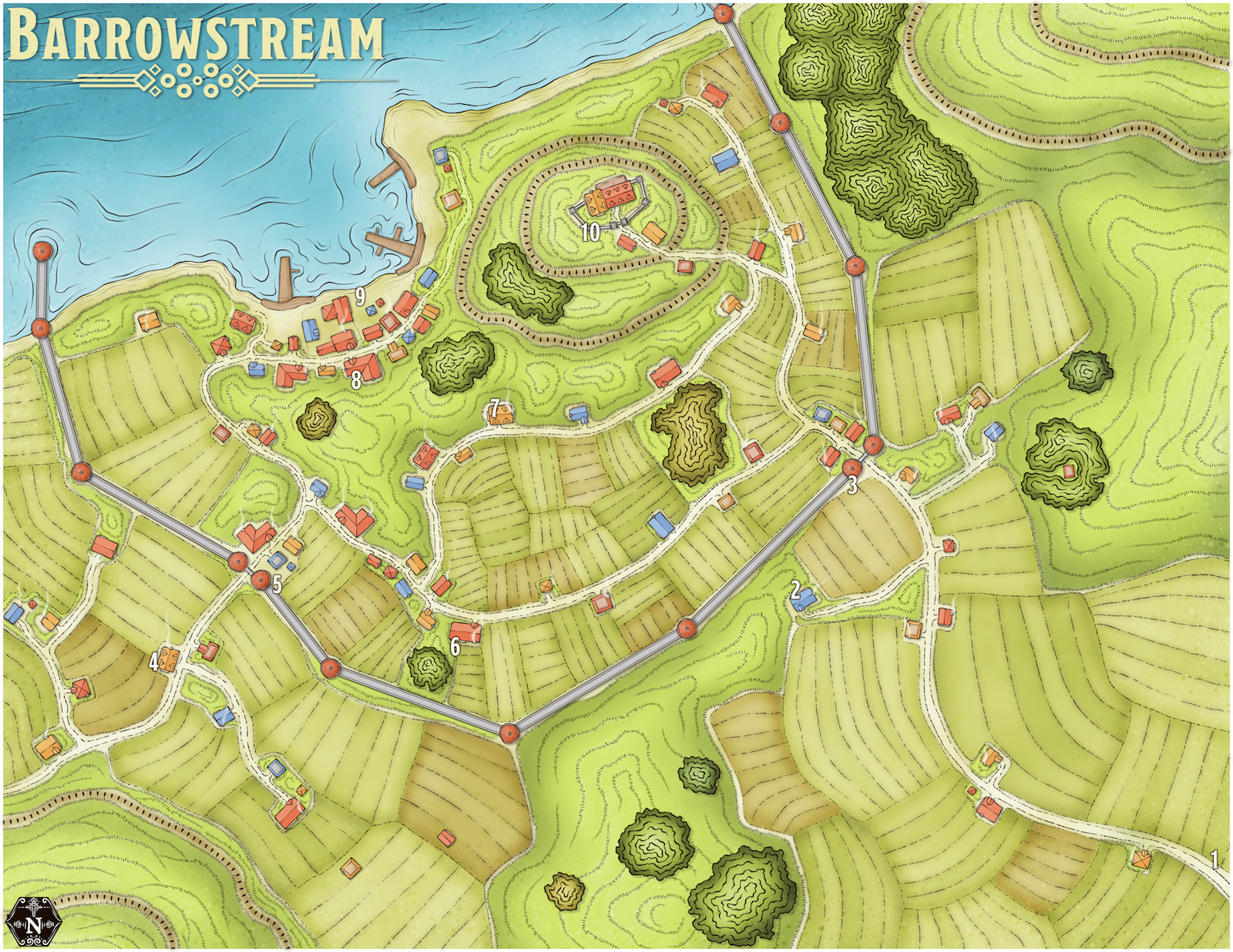