This is a short chapter. You will have noticed there are some encounters with druids in the random encounter tables. These folks wear ragged clothes and their demeanor and appearance is savage. It’s never stated in the book specifically, but rather implied, that all these druids are part of the same druidic circle. Centuries ago they became trapped in Barovia like everyone else. Since they are druids and their duty and labor is with the land itself they probably were not so preoccupied with being permanently inside.

Overtime the original druids died off and were replaced by the younger generations. After some two or three generations, their values and ideals shifted, these druids were now part of a closed system were there was a big difference regarding their original ideologies. The difference was Count Strahd Von Zarovich. Their druidic teachings showed them how to manipulate nature and weather but none inside the Valley of Barovia surpassed the power Strahd had over the land.

Strahd is ancient, he is the land. A term probably coined by the druids themselves as they saw, time and again how there was never a chance they could control the weather and land like the count did. The obvious result is that Strahd became a figure of respect, then of worship. The druids in Barovia are devoted to Strahd, they are not civil folks and are as savage as animals. I would go so far as to suggest they do not even speak the common tongue, or maybe just a few of them do. Strahd can communicate in his animal forms or with the use of magic.

Remember that this chapter has one purpose only, help the Martikov family after saving the winery. That is the only adventure hook that leads there. And the only reason to go, unless there is a magical relic hidden in the area.

The map for this area has a scale of 50 ft. per square. It is difficult to visualize such a big area, Yester Hill truly is a very big place. Only the top of the hill where the statue is, is 250 ft. feet across. That’s a 50 squares circle, it probably doesn’t fit in your dinner table so you will have to either change the size, or just use the very parts you’ll need. 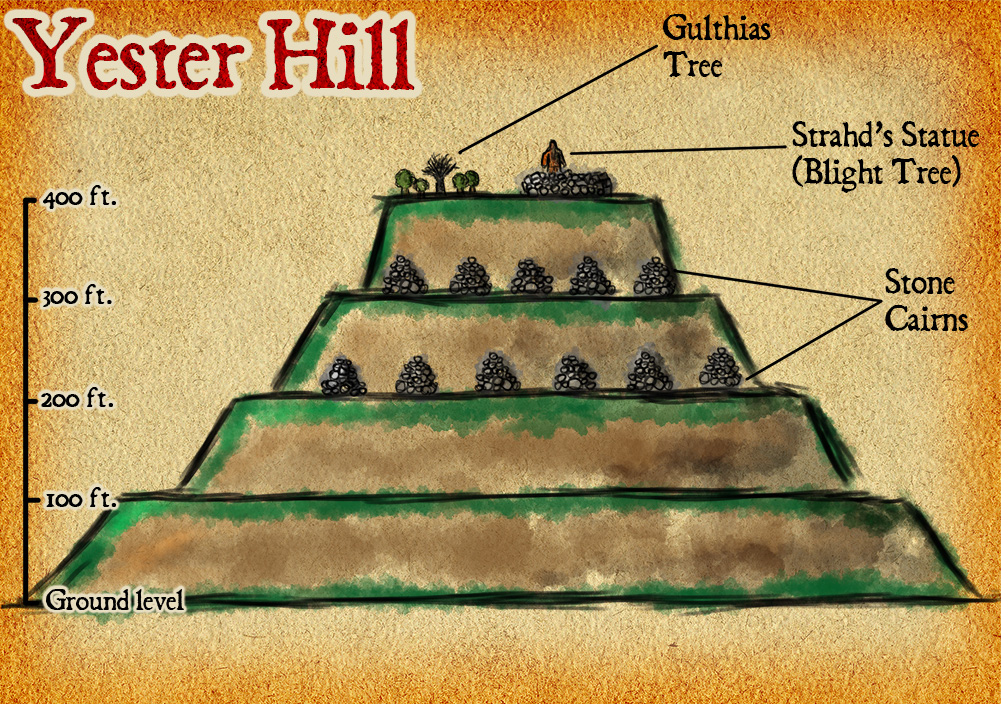 The main event in Yester Hill is the creation of the Blight Tree which is the ultimate weapon the druids have devised to utterly destroy the winery. The druids are waiting for Strahd when the party arrives, they can do the ritual anytime but would rather have Strahd’s blessing.

Many things can happen here, depending on how your party reacts with situations like this. The place is so big that the party can probably see the event from afar. It happened like that in my games. The party saw the group of druids and barbarians and decided to wait to see what really was going on. Strahd arrived in Beucephalus and my party felt tempted to go all-in, but the bard convinced them to wait and see. After all it was the first time they encountered Strahd and he was unaware of their presence. The druids started singing the ritual. It is important to simply describe this part as “singing ritually” and not flat out say that the druids “are performing a ritual”. They speak only in druidic; unless there’s a druid in the party, the contents of the song are inscrutable. After a minute of singing the tree blight came to life and started walking north. The party still waited, they figured the tree was slow enough they could catch up with it later if needed.

The druids and tribe folk left the place and only Strahd remained, apparently gazing directly into the wall of mist. The party then approached Strahd from behind. When they were close enough Strahd said “Why do you come here and bother me? Can a man not find peace and solace?” he turned around and the PCs saw there were tears rolling down his pale cheeks. Strahd turned into a swarm of bats and left the place.

The party then gazed through the mists and saw the mirage of Strahd’s ancient land. Only there was no way to know the meaning of that vision. But it served to convey a weak side of Strahd, the regret and sourness of being trapped in Barovia, with no ability to ever return to his place of birth.

In one of my games, the party didn’t even bother to explore the other side of the hill and they never saw the three. The place is so big they did not even think there was something to be found, plus they were in a hurry to catch up with the tree blight.

As described in the MM (page 31) a Gulthias Tree is a very interesting thing. It grows from a wooden stake used to kill a vampire. The stake grows tendrils and eventually becomes a sapling. Then a druid has to plant it and care for it and it becomes a Gulthias Tree. A vampiric tree of sorts and the source of blight monsters.

All the blight creatures in Barovia come from this Gulthias Tree. The evil druids of Yester Hill care for the tree and see that it sprouts more blight creatures all the time. If they are around when the tree is discovered, they will give their lives to save it.

This is a tough critter and it can easily down the party if they are not well prepared. The tree can make 4 attacks each round, plus a bite if it has any grappled target. Depending on how early in the module the party visits Yester Hill, this could be a very dangerous fight. Fortunately it is only one monster so action economy is on the PCs side. It is also a dangerous game if the party is low on resources after the conflicts in Yester Hill if there were any.

In the end, this is an optional chapter that only occurs if the party wishes to help the Martikovs. Notice that even if the party chooses not to help, the events described in this chapter occur. If at a later date the PCs visit The wizard of Wines, they will see that it was destroyed by the trampling tree. Even if they do not visit the winery again. Rumors and hearsay in all towns will be known. Every Barovian will be gloomier than usual due to the now confirmed scarcity of wine.