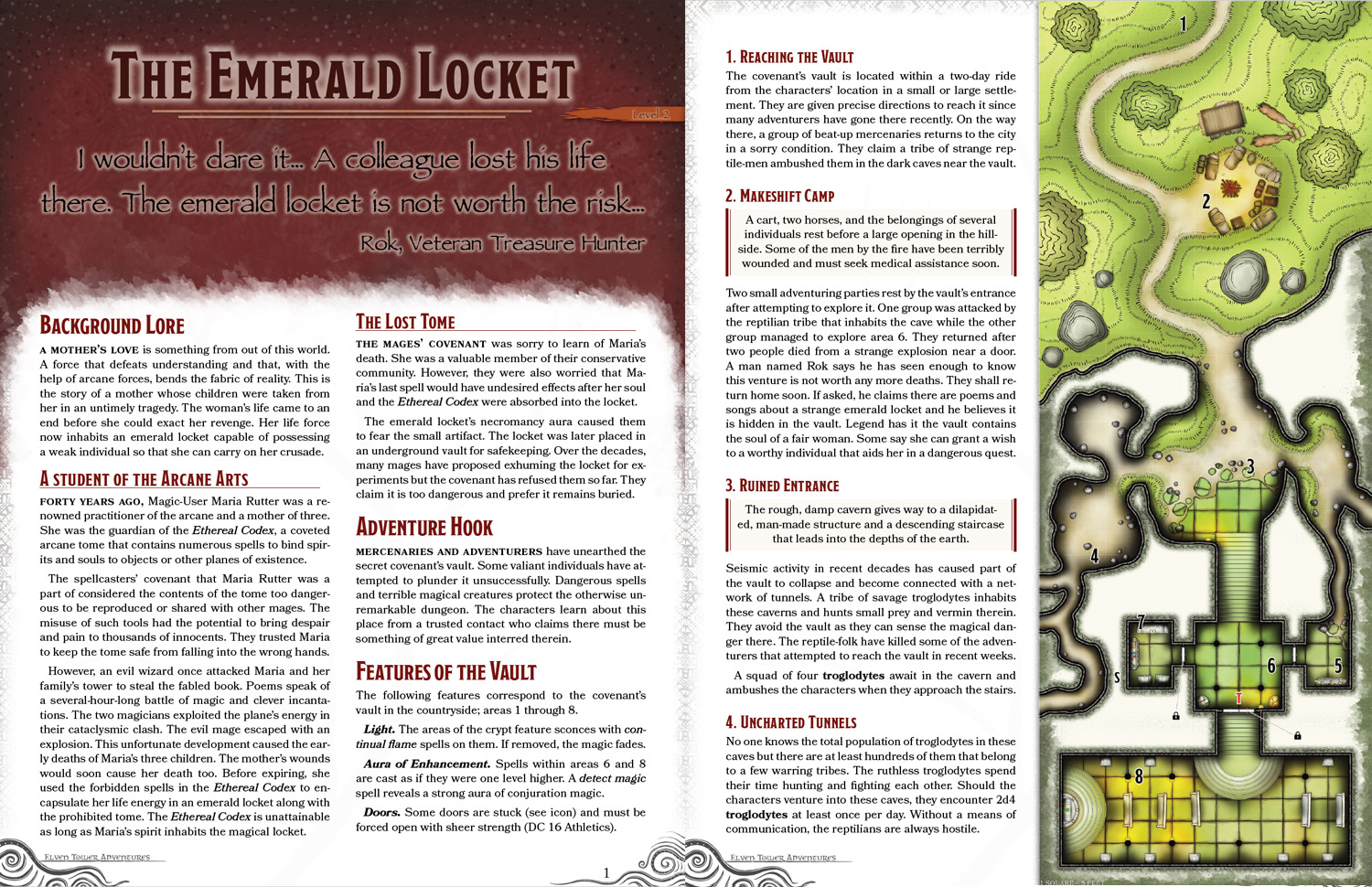 I wouldn’t dare it… A colleague lost his life there. The emerald locket is not worth the risk…

A mother’s love is something from out of this world. A force that defeats understanding and that, with the help of arcane forces, bends the fabric of reality. This is the story of a mother whose children were taken from her in an untimely tragedy. The woman’s life came to an end before she could exact her revenge. Her life force now inhabits an emerald locket capable of possessing a weak individual so that she can carry on her crusade.

A student of the Arcane Arts

Forty years ago, Magic-User Maria Rutter was a re­nowned practitioner of the arcane and a mother of three. She was the guardian of the Ethereal Codex, a coveted arcane tome that contains numerous spells to bind spir­its and souls to objects or other planes of existence.

The spellcasters’ covenant that Maria Rutter was a part of considered the contents of the tome too danger­ous to be reproduced or shared with other mages. The misuse of such tools had the potential to bring despair and pain to thousands of innocents. They trusted Maria to keep the tome safe from falling into the wrong hands.

However, an evil wizard once attacked Maria and her family’s tower to steal the fabled book. Poems speak of a several-hour-long battle of magic and clever incanta­tions. The two magicians exploited the plane’s energy in their cataclysmic clash. The evil mage escaped with an explosion. This unfortunate development caused the ear­ly deaths of Maria’s three children. The mother’s wounds would soon cause her death too. Before expiring, she used the forbidden spells in the Ethereal Codex to en­capsulate her life energy in an emerald locket along with the prohibited tome. The Ethereal Codex is unattainable as long as Maria’s spirit inhabits the magical locket.

The Mages’ covenant was sorry to learn of Maria’s death. She was a valuable member of their conservative community. However, they were also worried that Ma­ria’s last spell would have undesired effects after her soul and the Ethereal Codex were absorbed into the locket.

The emerald locket’s necromancy aura caused them to fear the small artifact. The locket was later placed in an underground vault for safekeeping. Over the decades, many mages have proposed exhuming the locket for ex­periments but the covenant has refused them so far. They claim it is too dangerous and prefer it remains buried.

Mercenaries and adventurers have unearthed the secret covenant’s vault. Some valiant individuals have at­tempted to plunder it unsuccessfully. Dangerous spells and terrible magical creatures protect the otherwise un­remarkable dungeon. The characters learn about this place from a trusted contact who claims there must be something of great value interred therein.

Features of the Vault

The following features correspond to the covenant’s vault in the countryside; areas 1 through 8.

Light. The areas of the crypt feature sconces with con­tinual flame spells on them. If removed, the magic fades.

Aura of Enhancement. Spells within areas 6 and 8 are cast as if they were one level higher. A detect magic spell reveals a strong aura of conjuration magic.

Doors. Some doors are stuck (see icon) and must be forced open with sheer strength (DC 16 Athletics).

The covenant’s vault is located within a two-day ride from the characters’ location in a small or large settle­ment. They are given precise directions to reach it since many adventurers have gone there recently. On the way there, a group of beat-up mercenaries returns to the city in a sorry condition. They claim a tribe of strange rep­tile-men ambushed them in the dark caves near the vault.

A cart, two horses, and the belongings of several individuals rest before a large opening in the hill­side. Some of the men by the fire have been terribly wounded and must seek medical assistance soon.

Two small adventuring parties rest by the vault’s entrance after attempting to explore it. One group was attacked by the reptilian tribe that inhabits the cave while the other group managed to explore area 6. They returned after two people died from a strange explosion near a door. A man named Rok says he has seen enough to know this venture is not worth any more deaths. They shall re­turn home soon. If asked, he claims there are poems and songs about a strange emerald locket and he believes it is hidden in the vault. Legend has it the vault contains the soul of a fair woman. Some say she can grant a wish to a worthy individual that aids her in a dangerous quest.

The rough, damp cavern gives way to a dilapidat­ed, man-made structure and a descending staircase that leads into the depths of the earth.

Seismic activity in recent decades has caused part of the vault to collapse and become connected with a net­work of tunnels. A tribe of savage troglodytes inhabits these caverns and hunts small prey and vermin therein. They avoid the vault as they can sense the magical dan­ger there. The reptile-folk have killed some of the adven­turers that attempted to reach the vault in recent weeks.

A squad of four troglodytes await in the cavern and ambushes the characters when they approach the stairs.

No one knows the total population of troglodytes in these caves but there are at least hundreds of them that belong to a few warring tribes. The ruthless troglodytes spend their time hunting and fighting each other. Should the characters venture into these caves, they encounter 2d4 troglodytes at least once per day. Without a means of communication, the reptilians are always hostile.

The characters can spend 10 minutes reading the few documents that remain in usable condition. They learn that the emerald locket was indeed stored in this vault and that it contains Maria Rutter’s soul. A spellcaster or historian knows that Maria Rutter was a renowned ma­gician and an authority in binding and summoning mag­ic (DC 16 Arcana or History). Unfortunately, little is pub­licly known of the circumstances of her death.

6. The Door of Runes

A large set of double doors inscribed with delicate draconian runes looms over the chamber. Some of the runes glow in iridescent, sparkling tones.

The door features a powerful incantation meant to deter tombrobbers and mercenaries. The draconic runes writ­ten by the covenant members recharge every 10 min­utes. Creatures touching the door must speak the com­mand word ‘Esurientes’ or trigger a terrible explosion. Creatures within 10 feet of the door take 4d6 fire dam­age and are knocked prone (DC 14 Dexterity / half).

The characters can spend 10 minutes reading the book­case’s documents. They learn of Maria Rutter’s encoun­ter final battle and how it caused the death of her three children and the loss of the Ethereal Codex.

The Eldest Son. The spirit of Maria’s eldest son (ghost) materializes before the characters. The teenager begs the characters to destroy the locket as the evil book has taken over his mother’s spirit. Unless it is destroyed, the locket shall always be a dangerous magical trinket. If they accept, the grateful ghost reveals the command word to open the Door of Runes in area 6. Otherwise, it curses the characters and finds a place to hide,

Treasure. The chests contain 430 gp, 840 sp, one wand of detect magic, and two potions of healing.

The emerald locket rests on a pedestal by the west end of the chapel-like chamber. It refracts incoming light and turns it scintillating green. A silent alarm spell informs members of the mages’ covenant that the characters have arrived (see Development). The covenant’s last re­sort protection activates. Strings of bones fly from their enclosures and coalesce into four skeletons and one wight. The undead abominations fight until slain and do their best to stop the characters from claiming the em­erald locket. The locket glows more and becomes bright­er with each undead that is destroyed during this battle.

The emerald locket functions as a +3 amulet of protec­tion but it is also a sentient item that attempts to take over its wielder as soon as possible. A possessed individ­ual must carry on Maria Rutter’s quest. They must seek out the evil necromancer from her past and avenge her children. The implications of this are left to the GM.

If the characters refuse to wear the locket, it has no pow­er over any of them. The locket can be destroyed with an adamantine weapon or a method of equivalent strength. Destroying the locket buries all the arcane knowledge in the Ethereal Codex forever. The mages’ covenant shall seek the characters to stop their reckless actions. They soon send their agents to retrieve the emerald locket. That is, however, an adventure for another day…