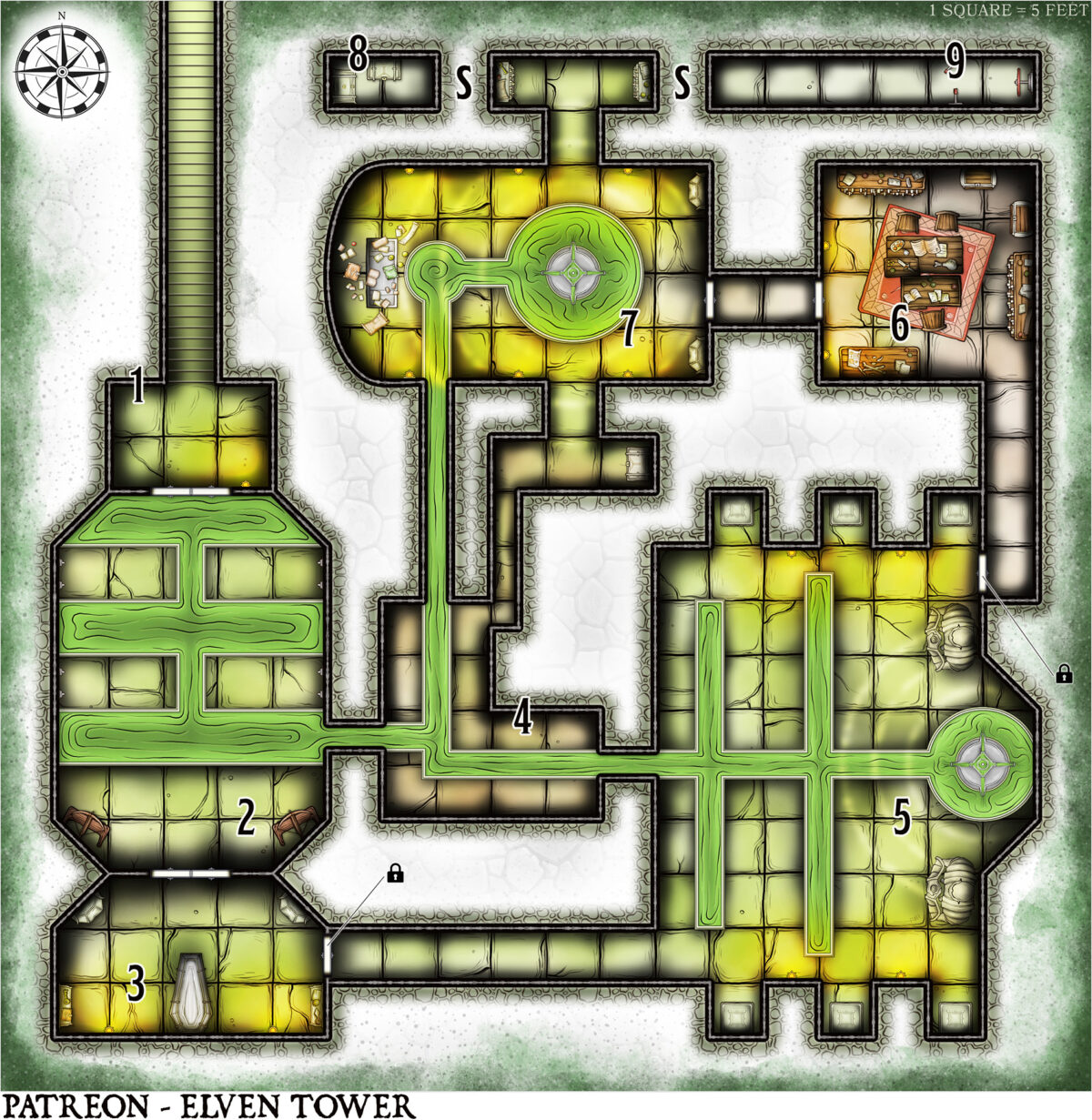 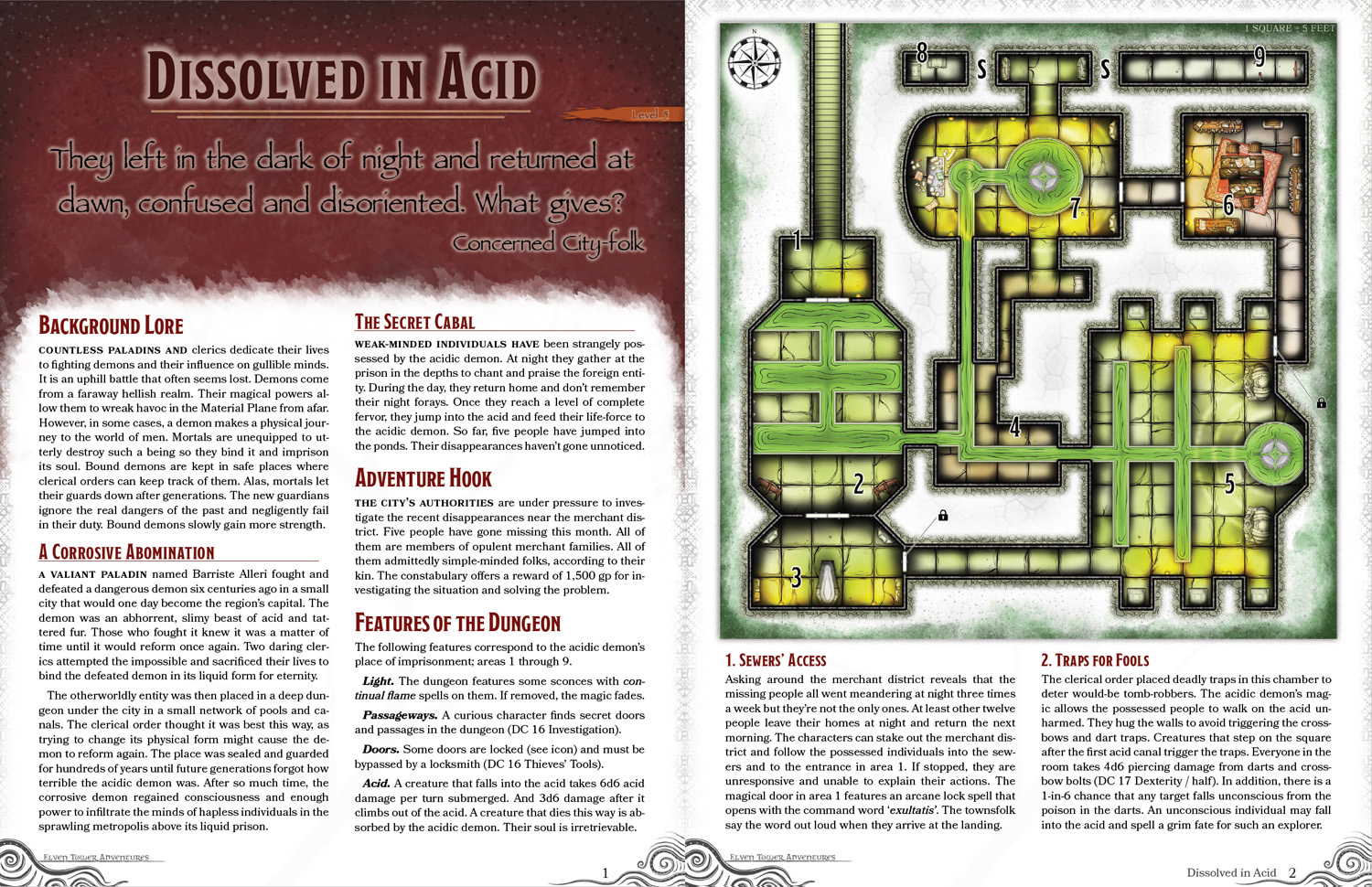 They left in the dark of night and returned at dawn, confused and disoriented. What gives?

Countless paladins and clerics dedicate their lives to fighting demons and their influence on gullible minds. It is an uphill battle that often seems lost. Demons come from a faraway hellish realm. Their magical powers al­low them to wreak havoc in the Material Plane from afar. However, in some cases, a demon makes a physical jour­ney to the world of men. Mortals are unequipped to ut­terly destroy such a being so they bind it and imprison its soul. Bound demons are kept in safe places where clerical orders can keep track of them. Alas, mortals let their guards down after generations. The new guardians ignore the real dangers of the past and negligently fail in their duty. Bound demons slowly gain more strength.

A valiant paladin named Barriste Alleri fought and defeated a dangerous demon six centuries ago in a small city that would one day become the region’s capital. The demon was an abhorrent, slimy beast of acid and tat­tered fur. Those who fought it knew it was a matter of time until it would reform once again. Two daring cler­ics attempted the impossible and sacrificed their lives to bind the defeated demon in its liquid form for eternity.

The otherworldly entity was then placed in a deep dun­geon under the city in a small network of pools and ca­nals. The clerical order thought it was best this way, as trying to change its physical form might cause the de­mon to reform again. The place was sealed and guarded for hundreds of years until future generations forgot how terrible the acidic demon was. After so much time, the corrosive demon regained consciousness and enough power to infiltrate the minds of hapless individuals in the sprawling metropolis above its liquid prison.

Weak-minded individuals have been strangely pos­sessed by the acidic demon. At night they gather at the prison in the depths to chant and praise the foreign enti­ty. During the day, they return home and don’t remember their night forays. Once they reach a level of complete fervor, they jump into the acid and feed their life-force to the acidic demon. So far, five people have jumped into the ponds. Their disappearances haven’t gone unnoticed.

The city’s authorities are under pressure to inves­tigate the recent disappearances near the merchant dis­trict. Five people have gone missing this month. All of them are members of opulent merchant families. All of them admittedly simple-minded folks, according to their kin. The constabulary offers a reward of 1,500 gp for in­vestigating the situation and solving the problem.

The following features correspond to the acidic demon’s place of imprisonment; areas 1 through 9.

Light. The dungeon features some sconces with con­tinual flame spells on them. If removed, the magic fades.

Doors. Some doors are locked (see icon) and must be bypassed by a locksmith (DC 16 Thieves’ Tools).

Asking around the merchant district reveals that the missing people all went meandering at night three times a week but they’re not the only ones. At least other twelve people leave their homes at night and return the next morning. The characters can stake out the merchant dis­trict and follow the possessed individuals into the sew­ers and to the entrance in area 1. If stopped, they are unresponsive and unable to explain their actions. The magical door in area 1 features an arcane lock spell that opens with the command word ‘exultatis’. The townsfolk say the word out loud when they arrive at the landing.

The clerical order placed deadly traps in this chamber to deter would-be tomb-robbers. The acidic demon’s mag­ic allows the possessed people to walk on the acid un­harmed. They hug the walls to avoid triggering the cross­bows and dart traps. Creatures that step on the square after the first acid canal trigger the traps. Everyone in the room takes 4d6 piercing damage from darts and cross­bow bolts (DC 17 Dexterity / half). In addition, there is a 1-in-6 chance that any target falls unconscious from the poison in the darts. An unconscious individual may fall into the acid and spell a grim fate for such an explorer.

Barriste Alleri was buried here along with the two clerics who sacrificed their lives to imprison the demon. They were supposed to guard the dungeon for eternity but the demon’s first action after regaining consciousness was to corrupt their spirits and destroy their minds. The pal­adin (wight) and the clerics (specters) rise from their resting places and attack any trespassers not possessed by the demon. Destroying them allows Barriste a mo­ment of lucidity where he pleads the characters to stop the demon or else it shall soon free itself and unleash its power on the metropolis above. He blesses one blade or hammer making it a +2 magical weapon for 24 hours.

This intermediate area connects areas 2, 5, and 7 through the acid canals. Those possessed by the demon walk on the acid and move to area 7 through here. The characters must find a way to climb through the passag­es or avoid touching the corrosive substance.

Treasure. The chest by the northeast alcove contains 270 gp, 670 sp, and two potions of resistance (acid).

5. Guardians from the Past

The clerical order that built this place left safeguards and protections to stop intruders. The demon’s follow­ers avoid this chamber because of this. When the char­acters arrive at this chamber, the two knight statues (gar­goyles) bow and ready for battle. Six shadows emerge from the wall plinths to steal the intruders’ strength.

These are all mindless automata that cannot be rea­soned with. They fight until slain but do not pursue.

The desks, chests, bookcases, and documents in this chamber appear to be impervious to the pas­sage of time. A layer of thick dust covers everything.

A detect magic spell reveals an abjuration aura on the walls of this room. This magic protects the room’s inani­mate contents from the passage of time. The characters can spend 1 hour perusing the library to learn the histo­ry of Barriste Alleri, the clerical order, and the acidic de­mon they managed to contain in the dungeon.

A cleric can learn the ritual that reinforces the magical barrier that binds the demon to the dungeon.

Ten mindless city-folk chant around the acid pond. One bellows fervently and jumps into the corrosive solvent. He vanishes in a matter of seconds.

The innocent man’s sacrifice empowers the demon enough to make a quasi-physical manifestation to stop the characters’ advance. A black pudding with maxed-out hit points emerges from the pond and attacks the characters. The nine possessed people (commoners) draw daggers and fight back as well. During the fight, any of the commoners can jump into the acid, Their sac­rifice heals the black pudding 3d6 hit points. The door to area 9 is wide open; the commoners have tried to free the demon using the controls unsuccessfully.

Defeating the ooze frees any surviving people from the demon’s grasp. They are confused and exhausted.

The secret passage behind a fake bookcase filled with replicas and empty books leads to a secret vault.

Two metal levers and a revolving valve control a mecha­nism that reverses the flow of the acid in the canals and pools. This must be done before attempting the ritual de­scribed in area 6 as it leaves the demon vulnerable to magic for 1 hour. Operating this device before the battle in area 7 gives the characters advantage on all attacks.

Defeating the black pudding in area 7 doesn’t harm or hinder the acidic demon, it only stalls it. Unless the ritual in area 6 is performed, the demon shall continue its cor­ruption of weak-minded individuals to gain power. A cler­ic can spend a level 3 slot and three hours of deep prayer and meditation to perform the binding ritual. After this is done, the demon is dormant once again. There is no way to know how long this effect will last. Tracking down the clerics that built the dungeon yields more information.

Back in town, the constabulary is happy to hear that the problem is solved. The characters are invited to a public funeral for all those who lost their lives. The de­mon’s goals live unconsciously in the mind of a former­ly possessed person. Soon, the acidic demon will return for revenge. But that is an adventure for another day… 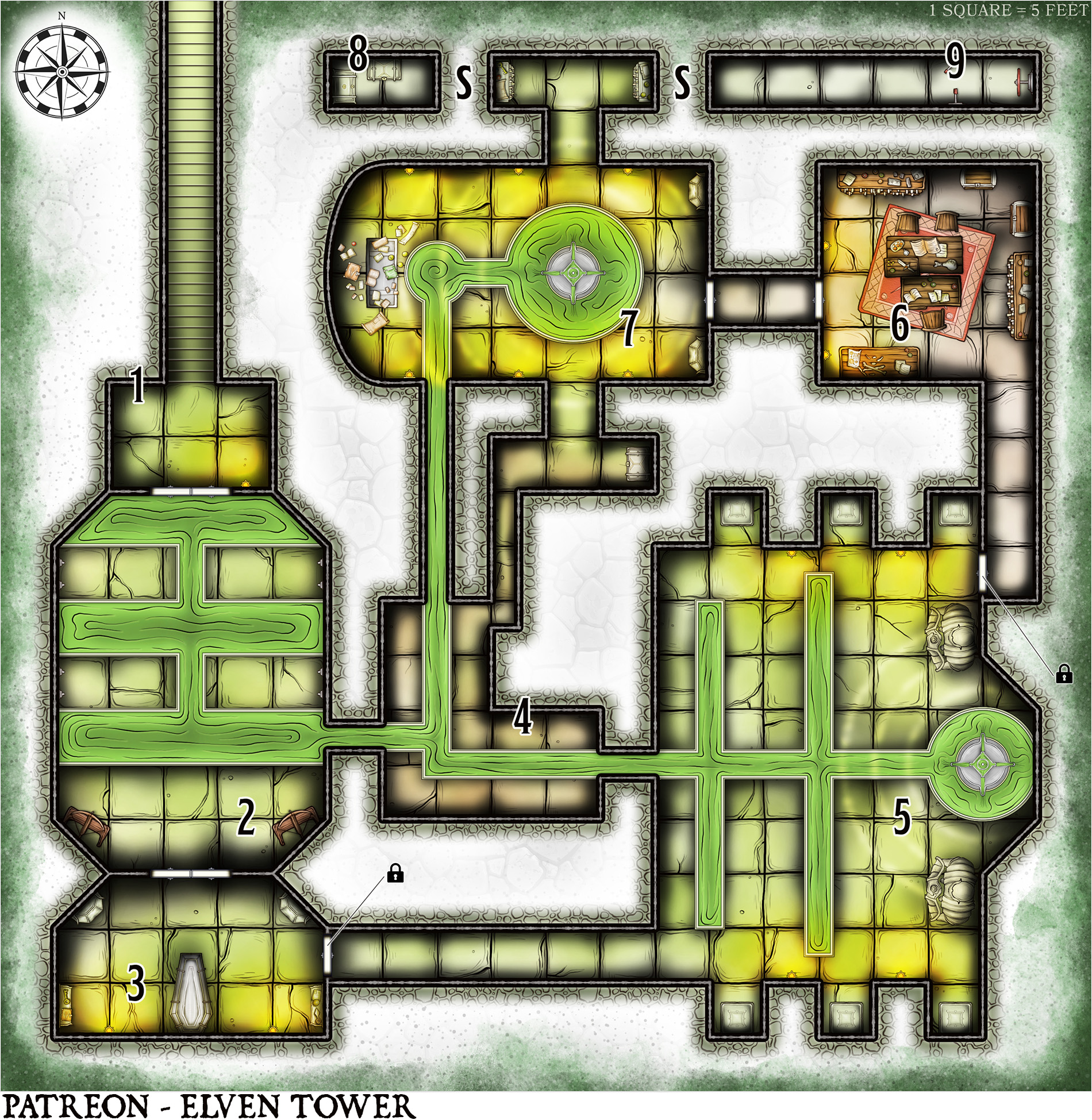