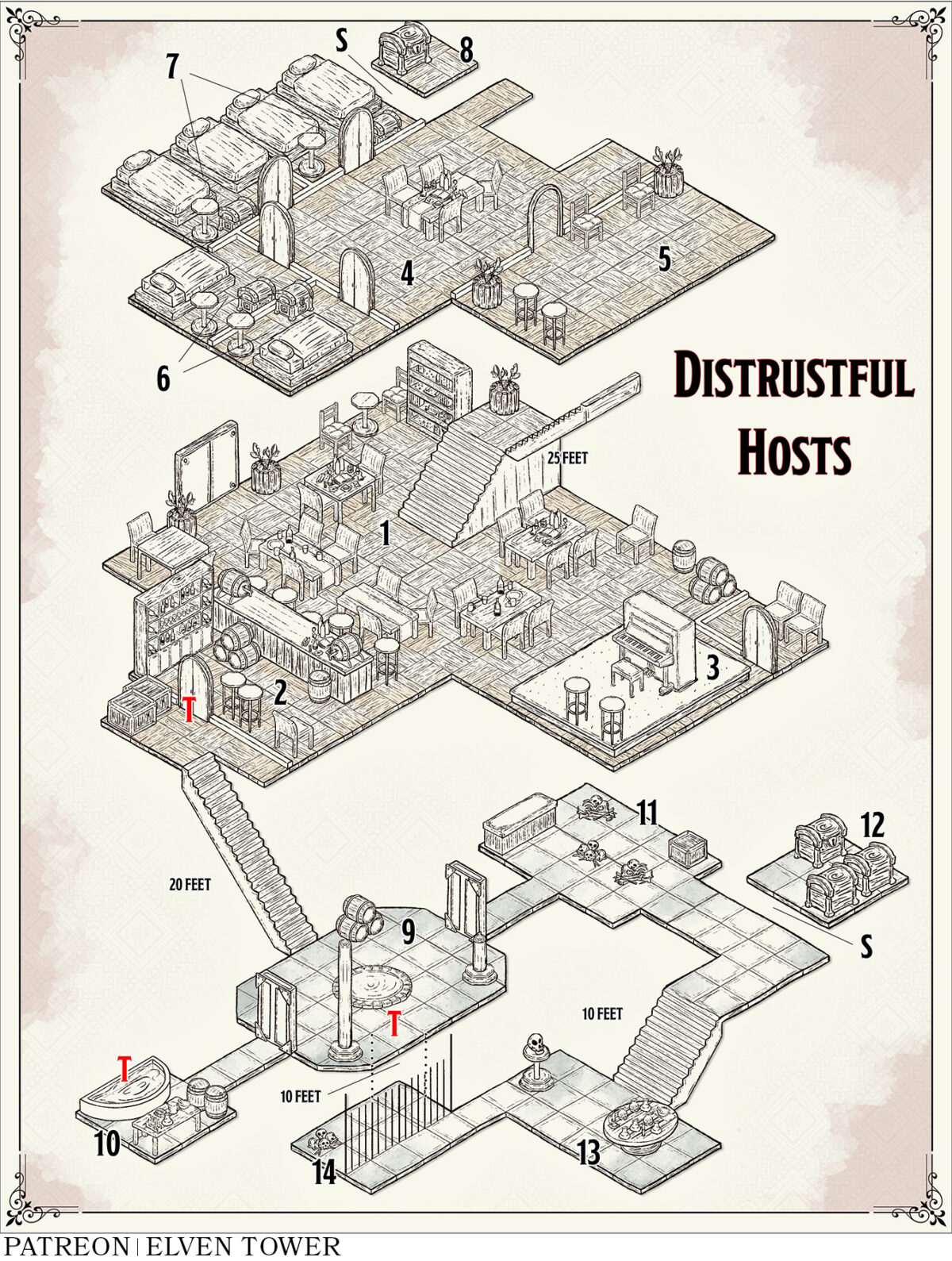 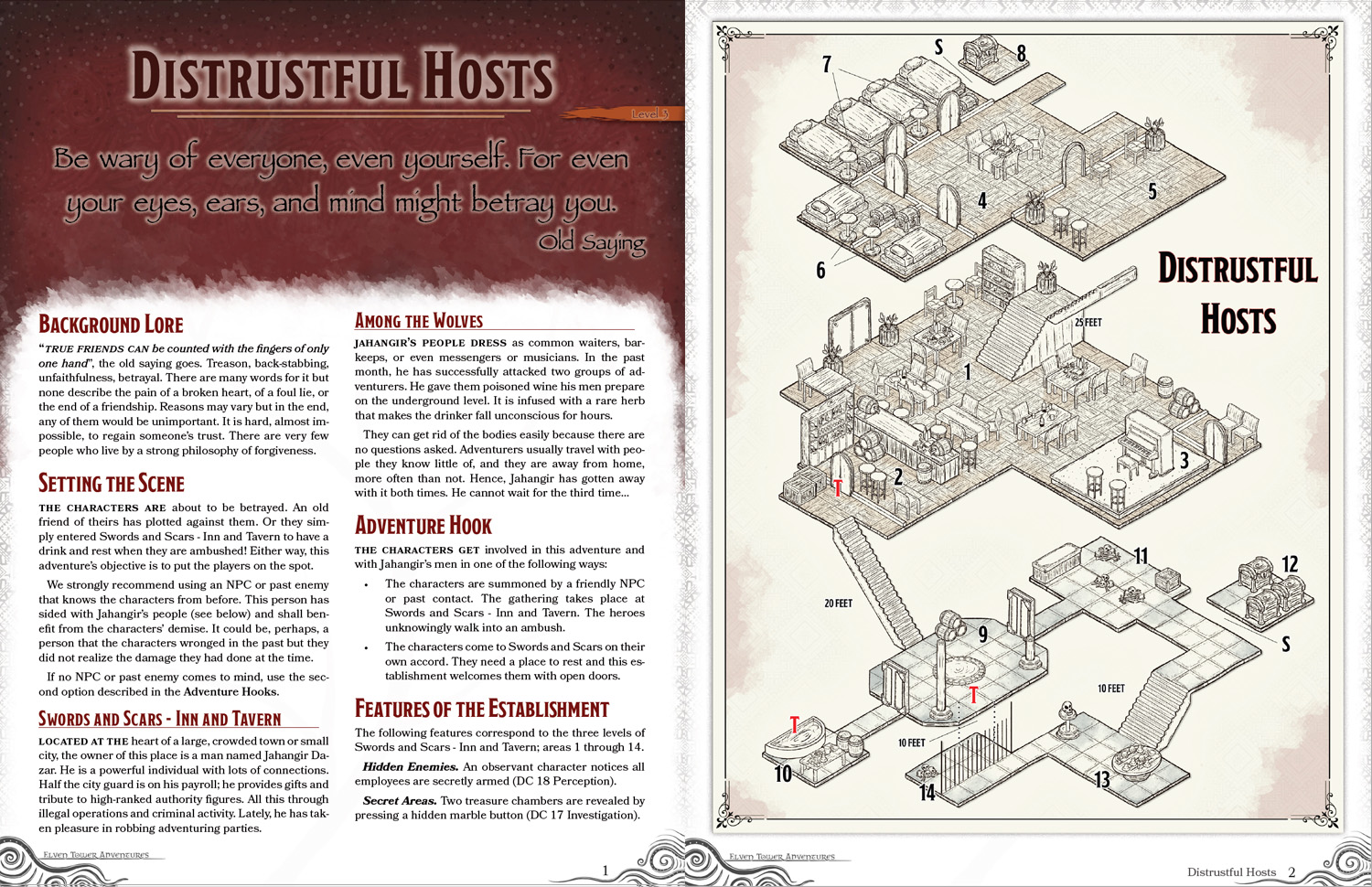 Be wary of everyone, even yourself. For even your eyes, ears, and mind might betray you.

“True friends can be counted with the fingers of only one hand”, the old saying goes. Treason, back-stabbing, unfaithfulness, betrayal. There are many words for it but none describe the pain of a broken heart, of a foul lie, or the end of a friendship. Reasons may vary but in the end, any of them would be unimportant. It is hard, almost im­possible, to regain someone’s trust. There are very few people who live by a strong philosophy of forgiveness.

The characters are about to be betrayed. An old friend of theirs has plotted against them. Or they sim­ply entered Swords and Scars – Inn and Tavern to have a drink and rest when they are ambushed! Either way, this adventure’s objective is to put the players on the spot.

We strongly recommend using an NPC or past enemy that knows the characters from before. This person has sided with Jahangir’s people (see below) and shall ben­efit from the characters’ demise. It could be, perhaps, a person that the characters wronged in the past but they did not realize the damage they had done at the time.

If no NPC or past enemy comes to mind, use the sec­ond option described in the Adventure Hooks.

Swords and Scars – Inn and Tavern

Located at the heart of a large, crowded town or small city, the owner of this place is a man named Jahangir Da­zar. He is a powerful individual with lots of connections. Half the city guard is on his payroll; he provides gifts and tribute to high-ranked authority figures. All this through illegal operations and criminal activity. Lately, he has tak­en pleasure in robbing adventuring parties.

Jahangir’s people dress as common waiters, bar­keeps, or even messengers or musicians. In the past month, he has successfully attacked two groups of ad­venturers. He gave them poisoned wine his men prepare on the underground level. It is infused with a rare herb that makes the drinker fall unconscious for hours.

They can get rid of the bodies easily because there are no questions asked. Adventurers usually travel with peo­ple they know little of, and they are away from home, more often than not. Hence, Jahangir has gotten away with it both times. He cannot wait for the third time…

The characters get involved in this adventure and with Jahangir’s men in one of the following ways:

Features of the Establishment

The following features correspond to the three levels of Swords and Scars – Inn and Tavern; areas 1 through 14.

The main hall at Swords and Scars – Inn and Tav­ern looks incredible. The wooden tables with chairs and stools can hold up to two dozen guests. Well-dressed waiters make their way between all of it to serve thirsty mouths and empty stomachs.

The characters’ arrival in town does not go unnoticed. Jahangir’s scouts see them at the gates. The rest of his men at the tavern have been informed of the targets.

Regardless of the reason that brings the characters here (see Adventure Hooks), there are plenty of people drinking and having a good time the moment they arrive. The place is a 24/7 establishment. It knows no rest.

Atmosphere. There are four musicians on the stage with no lack of happy melodies. If the characters have an appointment, the person waits for them at a table with drinks and food ready. Otherwise, a waiter named Davi­an shows them to a secluded table so they can sit.

Agents. Jahangir’s men hide as waiters or bouncers. Even the musicians get involved if necessary. There is a total of six commoners, four bandits, two thugs, and one cult fanatic watching the characters’ every move. They all wait for the wine to work (see Development).

Two barkeeps (one of them Jahangir) handle the drinks behind the counter. Two people help carry kegs and oth­er stuff from here to the storage beyond the back door.

Back Door. Opening the door without the key triggers a poison dart trap. The victim takes 3d6 poison damage and is poisoned for one hour (DC 16 Constitution).

A beautiful grand piano is part of the tavern’s furniture. It requires several strong men to lift it. The other musi­cians carry their instruments with them each day.

Backstage. Four bandits hide in here. They wait for instructions. They come out if a skirmish starts outside.

A table occupies the center of the second-story hall. Characters can enter the inn’s guestrooms from here. A varnished wooden arched threshold leads to the balcony.

The balcony is 25 feet above the tavern’s main hall. The music can be appreciated from here as well. Two thugs with ropes are ready to jump down for action.

These identical rooms contain a bed, a table, and a chest each. One of them is occupied when the characters come. The man’s name is Derrick. He stays for the night.

Possible Ally. Derrick drinks at the main hall (area 1) when the characters arrive. He does not approach to talk unless invited but he welcomes friendly chat if the char­acters address him. If the characters show respect and Derrick notices he can trust them, he says the following:

“Listen, good fella. I don’t know about you or your friends. But I, for one, have a keen eye for trouble. First, I would not drink this tavern’s wine. It comes on kegs with a symbol I’ve never seen before. And the kegs come from below, not outside. Ain’t that a little sus’? You haven’t drunk a drop have ye’? (Sigh…) Second, one of the waiters gave me a bad look. I might leave even though I paid the night”.

It is fine if the characters and Derrick do not make con­tact in any way. They still might end up meeting each oth­er if a battle starts. The characters may also become sus­picious of the wine themselves (see Development).

The second bed is the only difference between single and double bedrooms. The characters are given both of these and the unoccupied single one if they wish to stay.

The characters find this area if they activate the button behind the bed’s frame. A small section of the wall slides inward to reveal this area. The chest inside contains 1,400 gp worth of silver ingots and some gold coins.

The magic circle at the center of this area was used to place foul necromancy spells. Jahangir’s men in charge of the prisoners are here. Three thugs stand guard against trespassers. The set of locked iron doors can only be opened by a skilled locksmith (DC 15 Thieves’ Tools).

Trap. If a character stands on the pressure-sensitive plate, the trapdoor triggers. They fall 10 feet, take 2d6 bludgeoning damage, and end up trapped in area 14.

Jahangir’s mage placed an incantation on this pond. All liquid poured here turns into sweet, cherry-scented wine. However, any creature that drinks from it falls asleep for 1d4 hours (DC 13 Constitution). If the save is successful, the creature is immune to the wine until the next dawn.

The bones in this area shake when intruders come. Jah­angir’s mage placed a spell to reanimate them as guard­ians. Four skeletons fight to impede further passage. The container and boxes here have nothing of value.

The characters find this area if they activate the button hidden inside the container in area 11. A section of the wall slides upward to reveal this chamber. The chests contain 2,500 gp worth of elegant fabrics and spices.

Several flasks with chemical components and varied substances lie on the table. A spellcaster recognizes them as alchemy and necromancy ingredients. A pedes­tal with a skull lies at the end of the corridor. The last of Jahangir’s defenses coalesces from the dark, red, thick mist that pours from its eyes. Two shadows attack all creatures they see, including the prisoners (see below).

Jahangir still keeps two of the last adventurers he fooled and robbed trapped in the cell. They were five at first. All of them drank the wine a week ago and ended up here. Three have been killed already. Barto and Vlad are weak, famished, and injured. The light of hope returns to their faces when they see the characters. They beg for help.

Being a Prisoner. The characters might suffer the same fate as Barto and Vlad fate if they drink the wine. If that is the case, they all meet here (see Development).

Jahangir’s goal is to poison the characters and strip them of all their belongings when they fall asleep. If one or two of them resist the alcohol’s effects, the tavern’s staff takes care of them as quickly as they can. Those still breathing shall be put inside the cell in area 14.

The Truth Comes to Light

A mage can use a detect poison and disease spell to identify the wine’s soporific properties. They may also notice the weapons hidden behind aprons and uniforms (DC 17 Perception). If a battle starts, Jahangir (bandit leader) yells orders to his men and fights with them. Use all enemies mentioned before. Derrick (scout) takes the characters’ side if they met before. Otherwise, he has al­ready left after suspecting trouble was coming.

The Worst of Outcomes

The characters fall asleep or lose the battle against Jahangir’s goons. They are trapped in area 14. They have nothing with them but the clothes they wear. All their valuables and weapons are gone. Derrick is not here even if they met. He left before he could see the charac­ters fall asleep due to the wine. Barto and Vlad are weak but they shall help with an escape if it is proposed. How­ever, getting payback is an adventure for another day… 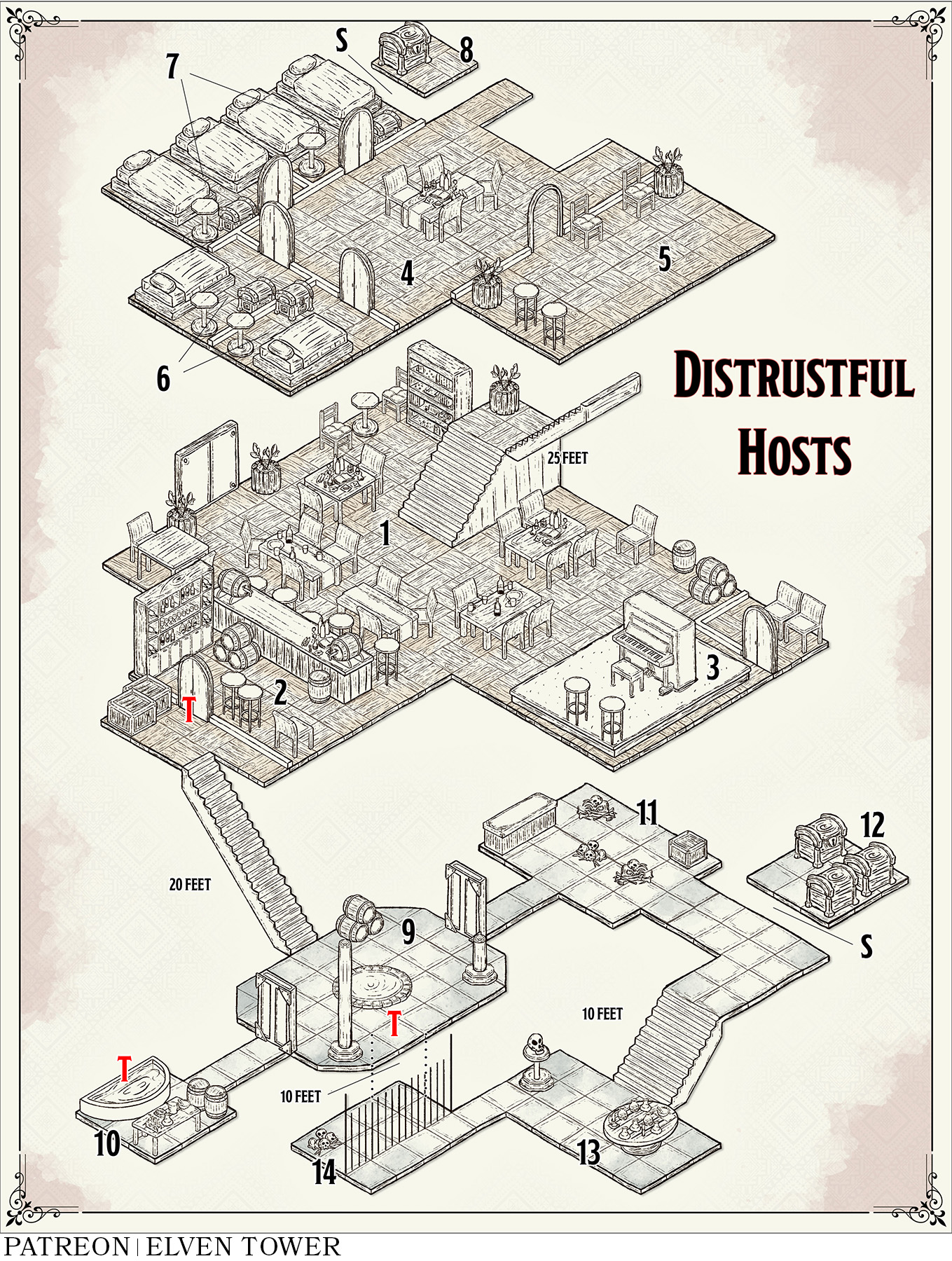