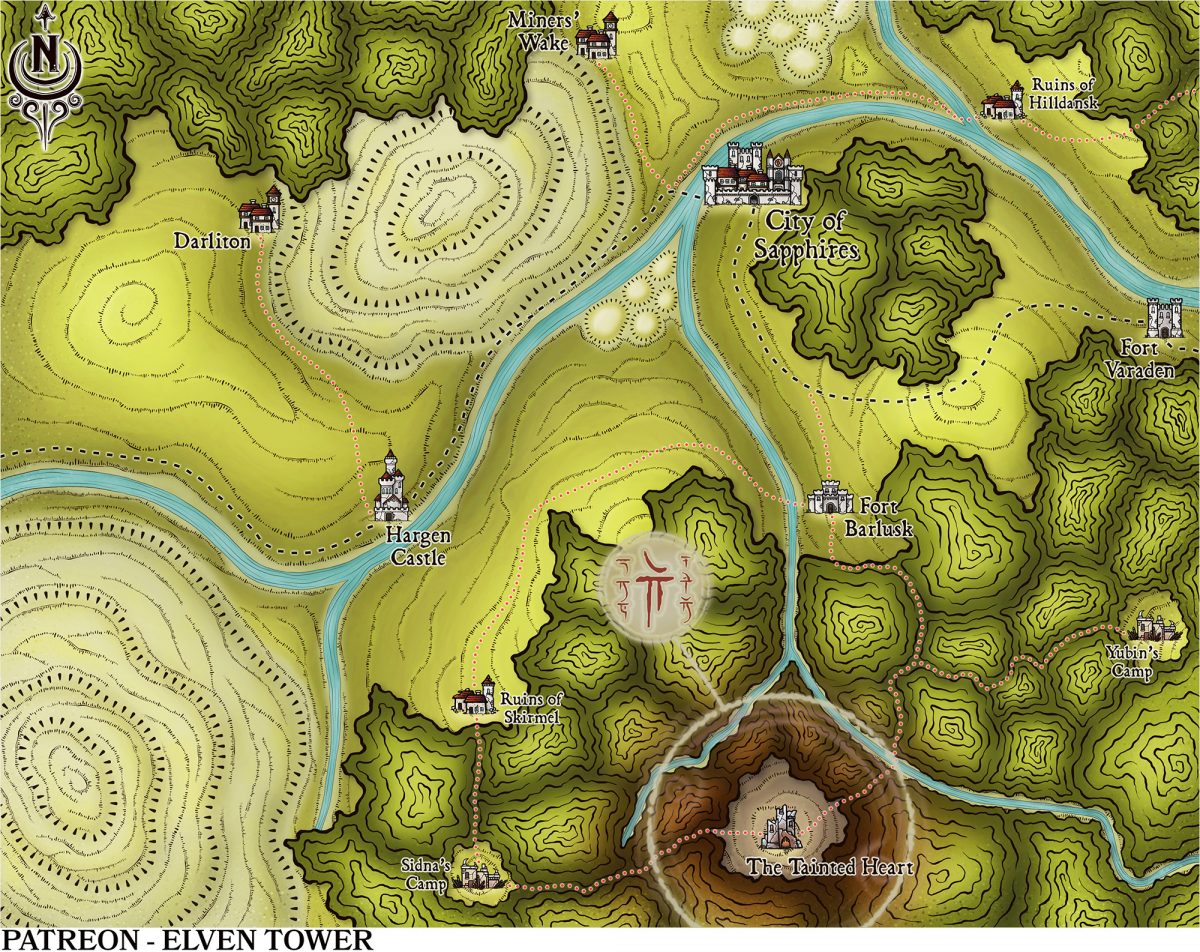 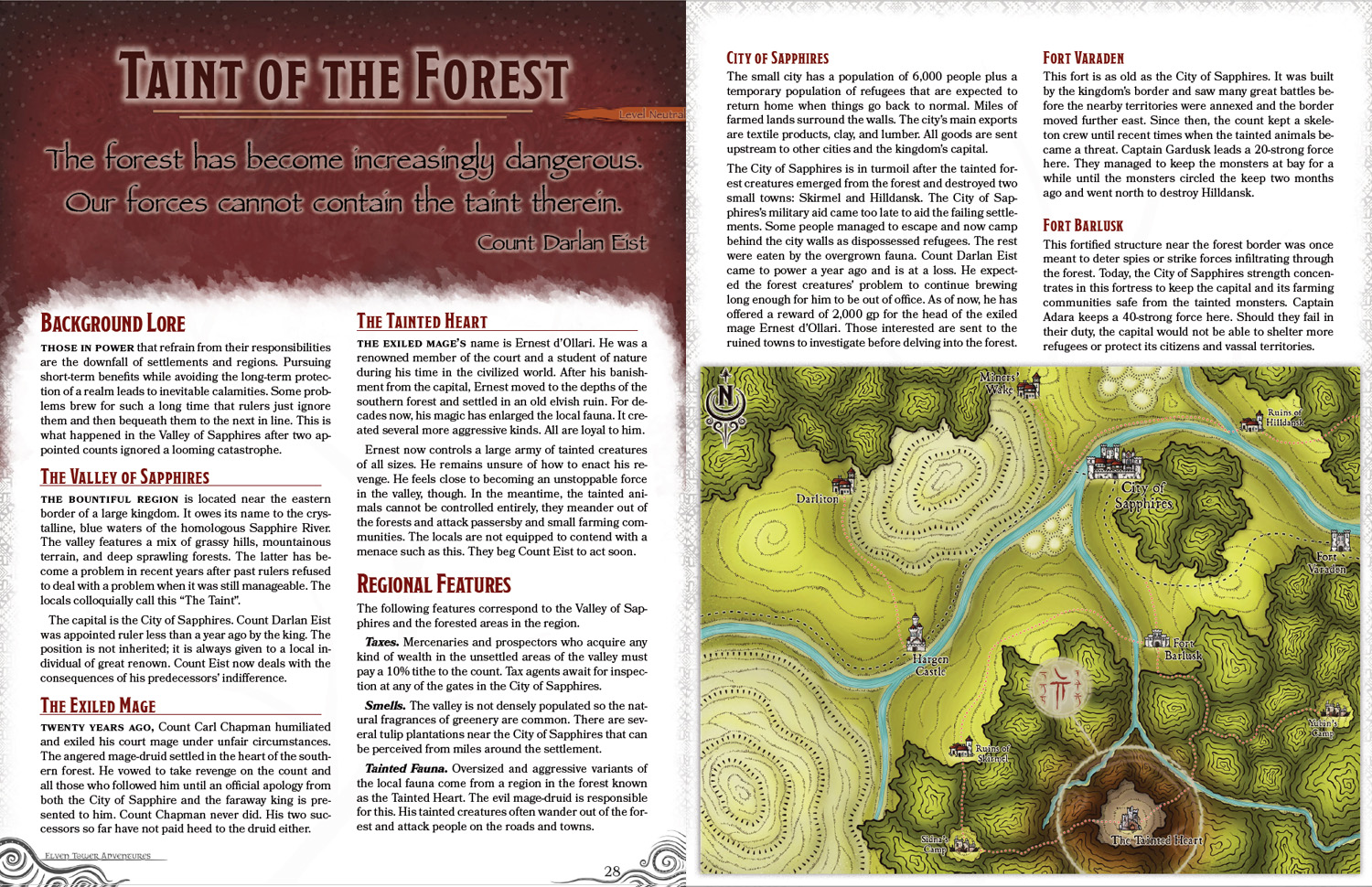 The forest has become increasingly dangerous. Our forces cannot contain the taint therein.

Those in power that refrain from their responsibilities are the downfall of settlements and regions. Pursuing short-term benefits while avoiding the long-term protec­tion of a realm leads to inevitable calamities. Some prob­lems brew for such a long time that rulers just ignore them and then bequeath them to the next in line. This is what happened in the Valley of Sapphires after two ap­pointed counts ignored a looming catastrophe.

The Valley of Sapphires

The bountiful region is located near the eastern border of a large kingdom. It owes its name to the crys­talline, blue waters of the homologous Sapphire River. The valley features a mix of grassy hills, mountainous terrain, and deep sprawling forests. The latter has be­come a problem in recent years after past rulers refused to deal with a problem when it was still manageable. The locals colloquially call this “The Taint”.

The capital is the City of Sapphires. Count Darlan Eist was appointed ruler less than a year ago by the king. The position is not inherited; it is always given to a local in­dividual of great renown. Count Eist now deals with the consequences of his predecessors’ indifference.

Twenty years ago, Count Carl Chapman humiliated and exiled his court mage under unfair circumstances. The angered mage-druid settled in the heart of the south­ern forest. He vowed to take revenge on the count and all those who followed him until an official apology from both the City of Sapphire and the faraway king is pre­sented to him. Count Chapman never did. His two suc­cessors so far have not paid heed to the druid either.

The exiled mage’s name is Ernest d’Ollari. He was a renowned member of the court and a student of nature during his time in the civilized world. After his banish­ment from the capital, Ernest moved to the depths of the southern forest and settled in an old elvish ruin. For de­cades now, his magic has enlarged the local fauna. It cre­ated several more aggressive kinds. All are loyal to him.

Ernest now controls a large army of tainted creatures of all sizes. He remains unsure of how to enact his re­venge. He feels close to becoming an unstoppable force in the valley, though. In the meantime, the tainted ani­mals cannot be controlled entirely, they meander out of the forests and attack passersby and small farming com­munities. The locals are not equipped to contend with a menace such as this. They beg Count Eist to act soon.

The following features correspond to the Valley of Sap­phires and the forested areas in the region.

Taxes. Mercenaries and prospectors who acquire any kind of wealth in the unsettled areas of the valley must pay a 10% tithe to the count. Tax agents await for inspec­tion at any of the gates in the City of Sapphires.

Smells. The valley is not densely populated so the nat­ural fragrances of greenery are common. There are sev­eral tulip plantations near the City of Sapphires that can be perceived from miles around the settlement.

Tainted Fauna. Oversized and aggressive variants of the local fauna come from a region in the forest known as the Tainted Heart. The evil mage-druid is responsible for this. His tainted creatures often wander out of the for­est and attack people on the roads and towns.

The small city has a population of 6,000 people plus a temporary population of refugees that are expected to return home when things go back to normal. Miles of farmed lands surround the walls. The city’s main exports are textile products, clay, and lumber. All goods are sent upstream to other cities and the kingdom’s capital.

The City of Sapphires is in turmoil after the tainted for­est creatures emerged from the forest and destroyed two small towns: Skirmel and Hilldansk. The City of Sap­phires’s military aid came too late to aid the failing settle­ments. Some people managed to escape and now camp behind the city walls as dispossessed refugees. The rest were eaten by the overgrown fauna. Count Darlan Eist came to power a year ago and is at a loss. He expect­ed the forest creatures’ problem to continue brewing long enough for him to be out of office. As of now, he has offered a reward of 2,000 gp for the head of the exiled mage Ernest d’Ollari. Those interested are sent to the ruined towns to investigate before delving into the forest.

This fort is as old as the City of Sapphires. It was built by the kingdom’s border and saw many great battles be­fore the nearby territories were annexed and the border moved further east. Since then, the count kept a skele­ton crew until recent times when the tainted animals be­came a threat. Captain Gardusk leads a 20-strong force here. They managed to keep the monsters at bay for a while until the monsters circled the keep two months ago and went north to destroy Hilldansk.

This fortified structure near the forest border was once meant to deter spies or strike forces infiltrating through the forest. Today, the City of Sapphires strength concen­trates in this fortress to keep the capital and its farming communities safe from the tainted monsters. Captain Adara keeps a 40-strong force here. Should they fail in their duty, the capital would not be able to shelter more refugees or protect its citizens and vassal territories.

The small town had a population of 300 people before the attack. It is estimated that at least half of them perished during the assault, or later, as injured, hungry, homeless refugees in the capital. The town remains a dangerous place patrolled by enlarged creatures and sentient ooz­es. Should the characters visit these ruins, they learn that the oozes are made of acidic matter that corrodes even metal. Common weapons do not work against them but they can be vanquished with silver weaponry.

Skirmel had a population of 200 people before the first attack three months ago. They were hunters, lumber­jacks, and artisans. Their closeness to the southern for­est spelled doom for their way of life. They issued warn­ings and asked for help for years before their untimely demise. Today, nothing of value remains. Should the characters visit these ruins, they learn that elves recent­ly roamed the place. The characters find Sidna’s Camp if they follow the tracks into the southern forest.

Darlington is a small town of 350 people surrounded by miles of farmed lands. Due to its location north of Har­gen Castle and its distance from the southern forest, it has remained relatively unaffected by recent develop­ments. The majority of refugees from Skirmel moved here after the town was destroyed. After three months, most of them have mainly adapted to farming life.

A town of 150 people who spend their lives mining a profitable silver vein that spells prosperous times for the region. They remain unaffected by recent events. Howev­er, after Hilldansk, they could soon be attacked.

The southern forest is home to several sentient species: elves, satyrs, and a small number of fairies. For twenty years, they have seen their forest become an inhospita­ble place. The elves have tried to counter Ernest’s magic over their woods many times with no success so far. Er­nest’s might, abilities, and spells are too strong.

Past unsavory encounters with the local human popu­lations and their rulers have made the elves reluctant to ask for help or to communicate what they know. Many of them left the forest months ago. Those who stayed have sworn votes to fight to defend their home from the evil mage-druid. They have settled in two military camps.

Less than 20 elves warriors stayed in Sidna’s and Yubin’s camps. They welcome visitors as long as they share their goal of vanquishing the evil mage in the Tainted Heart. In case the characters befriend the elves, they learn that Ernest d’Ollari has settled in an old ruin of theirs. The wood elves consider the druid’s occupation of their sa­cred place an insult to their way of life and heritage.

Ernest d’Ollari awaits in the ruined elvish keep sur­rounded by dozens of tainted forest critters. The keep is located in a large clearing. The terrible consequences of his foul magic have wilted the flora. Grass blades, flow­ers, and trees are brittle and desaturated. A druid knows that it would powerful magic to undo the damage.

While the characters may approach the problem with violence and reach the mage by slaying dozens of mind­less beasts. Ernest d’Ollari is willing to entertain peace­ful visitors if they hear him. He may still agree to an am­icable resolution. But the issuance of an official apology is a whole new adventure. A quest for another day… 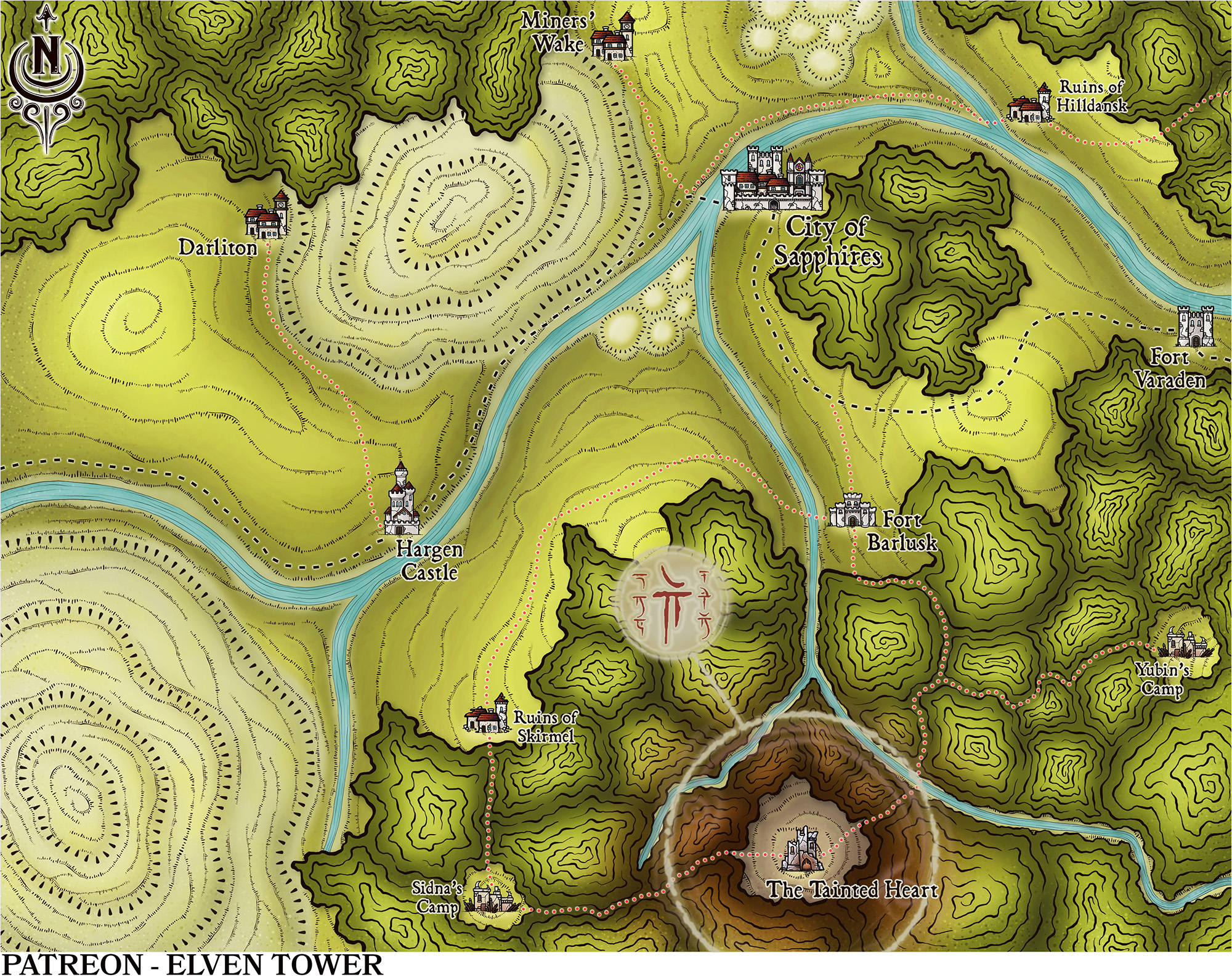