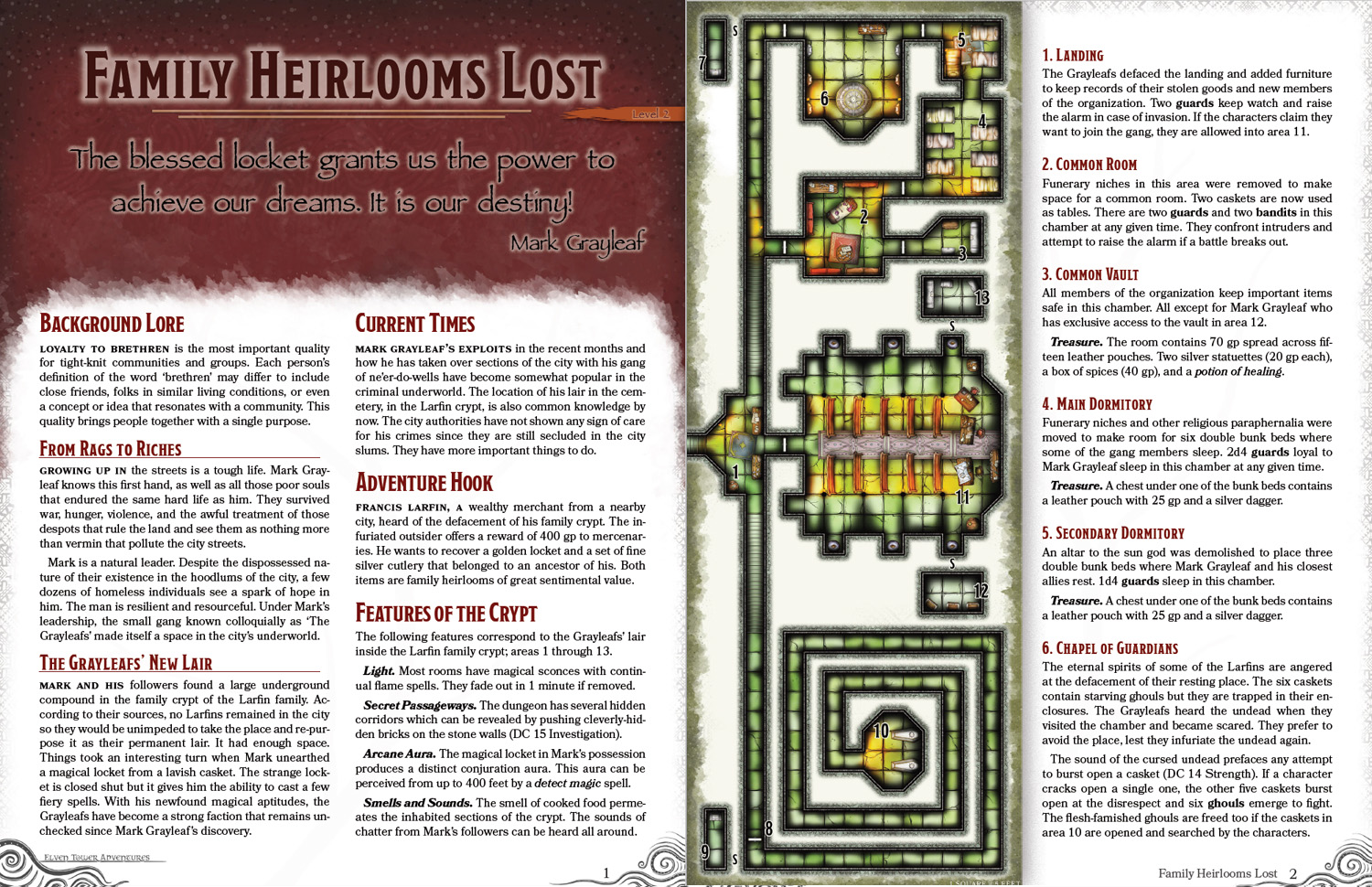 The blessed locket grants us the power to achieve our dreams. It is our destiny!

Loyalty to brethren is the most important quality for tight-knit communities and groups. Each person’s definition of the word ‘brethren’ may differ to include close friends, folks in similar living conditions, or even a concept or idea that resonates with a community. This quality brings people together with a single purpose.

From Rags to Riches

Growing up in the streets is a tough life. Mark Gray­leaf knows this first hand, as well as all those poor souls that endured the same hard life as him. They survived war, hunger, violence, and the awful treatment of those despots that rule the land and see them as nothing more than vermin that pollute the city streets.

Mark is a natural leader. Despite the dispossessed na­ture of their existence in the hoodlums of the city, a few dozens of homeless individuals see a spark of hope in him. The man is resilient and resourceful. Under Mark’s leadership, the small gang known colloquially as ‘The Grayleafs’ made itself a space in the city’s underworld.

Mark and his followers found a large underground compound in the family crypt of the Larfin family. Ac­cording to their sources, no Larfins remained in the city so they would be unimpeded to take the place and re-pur­pose it as their permanent lair. It had enough space. Things took an interesting turn when Mark unearthed a magical locket from a lavish casket. The strange lock­et is closed shut but it gives him the ability to cast a few fiery spells. With his newfound magical aptitudes, the Grayleafs have become a strong faction that remains un­checked since Mark Grayleaf’s discovery.

Mark Grayleaf’s exploits in the recent months and how he has taken over sections of the city with his gang of ne’er-do-wells have become somewhat popular in the criminal underworld. The location of his lair in the cem­etery, in the Larfin crypt, is also common knowledge by now. The city authorities have not shown any sign of care for his crimes since they are still secluded in the city slums. They have more important things to do.

Francis Larfin, a wealthy merchant from a nearby city, heard of the defacement of his family crypt. The in­furiated outsider offers a reward of 400 gp to mercenar­ies. He wants to recover a golden locket and a set of fine silver cutlery that belonged to an ancestor of his. Both items are family heirlooms of great sentimental value.

The following features correspond to the Grayleafs’ lair inside the Larfin family crypt; areas 1 through 13.

Secret Passageways. The dungeon has several hidden corridors which can be revealed by pushing cleverly-hid­den bricks on the stone walls (DC 15 Investigation).

Arcane Aura. The magical locket in Mark’s possession produces a distinct conjuration aura. This aura can be perceived from up to 400 feet by a detect magic spell.

Smells and Sounds. The smell of cooked food perme­ates the inhabited sections of the crypt. The sounds of chatter from Mark’s followers can be heard all around.

The Grayleafs defaced the landing and added furniture to keep records of their stolen goods and new members of the organization. Two guards keep watch and raise the alarm in case of invasion. If the characters claim they want to join the gang, they are allowed into area 11.

Funerary niches in this area were removed to make space for a common room. Two caskets are now used as tables. There are two guards and two bandits in this chamber at any given time. They confront intruders and attempt to raise the alarm if a battle breaks out.

All members of the organization keep important items safe in this chamber. All except for Mark Grayleaf who has exclusive access to the vault in area 12.

Treasure. The room contains 70 gp spread across fif­teen leather pouches. Two silver statuettes (20 gp each), a box of spices (40 gp), and a potion of healing.

Funerary niches and other religious paraphernalia were moved to make room for six double bunk beds where some of the gang members sleep. 2d4 guards loyal to Mark Grayleaf sleep in this chamber at any given time.

Treasure. A chest under one of the bunk beds contains a leather pouch with 25 gp and a silver dagger.

An altar to the sun god was demolished to place three double bunk beds where Mark Grayleaf and his closest allies rest. 1d4 guards sleep in this chamber.

Treasure. A chest under one of the bunk beds contains a leather pouch with 25 gp and a silver dagger.

The eternal spirits of some of the Larfins are angered at the defacement of their resting place. The six caskets contain starving ghouls but they are trapped in their en­closures. The Grayleafs heard the undead when they visited the chamber and became scared. They prefer to avoid the place, lest they infuriate the undead again.

The sound of the cursed undead prefaces any attempt to burst open a casket (DC 14 Strength). If a character cracks open a single one, the other five caskets burst open at the disrespect and six ghouls emerge to fight. The flesh-famished ghouls are freed too if the caskets in area 10 are opened and searched by the characters.

The dead-end hallway contains a booby-trapped chest. The Grayleafs recognized it for what it is and left it alone. Mark wants to bring a mage one day to open it.

Glyph of Warding. The runes are hard to see (DC 12 Investigation). Opening the chest causes an acidic explo­sion to target all creatures in the narrow passage. They take 5d8 acid damage (DC 12 Dexterity / half).

This reinforced iron door leads to the deep crypt. Im­portant members of the Larfin family are kept here in the form of ashes in small niche drawers. Mark ordered his followers to leave this place alone to avoid anger­ing the resting spirits further. The heavy door features a high-quality lock (DC 19 Thieves’ Tools). Mark Grayleaf, the gang leader, carries the only key to this door.

The dead-end hallway contains a booby-trapped chest. Mark and his followers left it alone like the one in area 7.

Glyph of Warding. The runes are hard to see (DC 12 Investigation). Opening the chest causes a roar of light­ning to target all creatures in the narrow passage. They take 5d8 lightning damage (DC 12 Dexterity / half).

A spiral-shaped corridor lined with countless niche draw­ers leads to a central area that contains two lavish cas­kets. The most important patriarchs of the Larfin family lie there. Both perished decades ago. Both caskets are open. Mark Grayleaf took the magical locket from one of the enclosures and left everything else as he found it.

Treasure. One casket contains the set of fine silver cut­lery (200 gp) that Francis Larfin wants recovered. Tak­ing the items causes the ghouls in area 6 to break out.

The crypt’s main chapel is now a conference room for sorts to the Grayleafs; all things of value removed from their locations for profit or fun. Mark Grayleaf (cult fa­natic), four guards, and four bandits await to see the characters’ reactions. Mark is friendly if the characters come with the pretense that they want to join the orga­nization. Otherwise, Mark orders them to go back to the city, or else the Grayleafs will make an example out of them. Mark is overconfident and careless because of their recent deeds in the city. He genuinely believes no one can match him as long as he commands the magi­cal locket’s power. Because of this, he fights to the death.

Mark Grayleaf keeps a personal fortune in this hidden vault; a hoard of ill-gotten riches and goods.

The Grayleafs never found this treasure hoard. It has re­mained undiscovered since its creation decades ago.

Mark Grayleaf is defeated to retrieve the magical lock­et. It is the only way he shall part ways with the family heirloom. When Francis Larfin recovers the lost items, he pays the promised reward of 400 gp and makes plans to return to his wealthy estate in a neighboring city.

Unbeknown to the characters, the power vacuum in the criminal underworld has earned them the friendship and enmity of several factions. The work opportunities and confrontations that arise from this unexpected de­velopment are an adventure for another day…