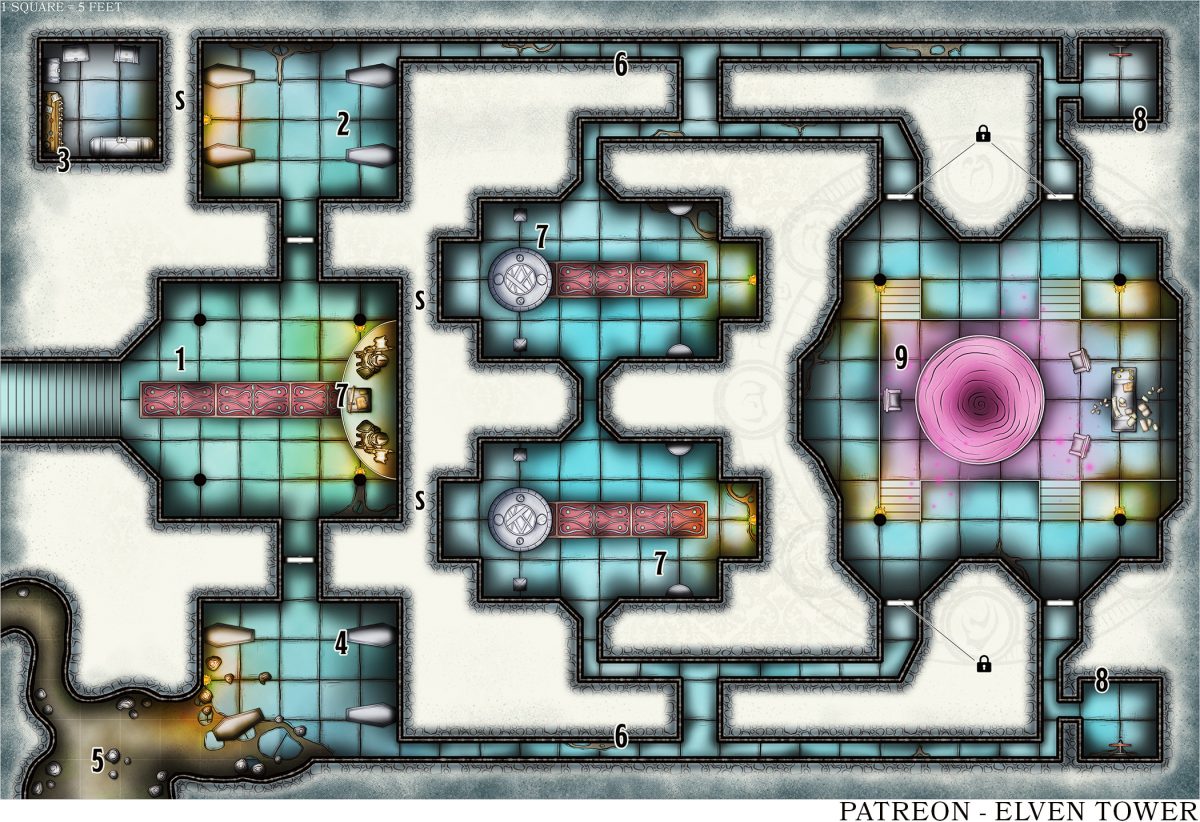 Alternate realities, impossible creations, wealth. All of these are found in the Well of Dreams.

The most wondrous creations of the arcane arts are, alas, hidden behind the unimpregnable curtain of time. Artifacts, spells, and incantations from ancient times show qualities and power that cannot be replicated by the mages of today. Regardless of how much time they spent honing their art, duplicating the achievements of bygone eras has proven impossible. The artifacts that re­main are coveted by mages and feared by everyone else.

The Dwarven Well of Reverie

Dwarven societies are often focused on mining, sculpting, and armor-making. Those are the crafts that most people think of when speaking of dwarves as a cul­ture. But it was not always so, in the deep past, dwar­ven craftsmen used lost arcane arts to embroider incan­tations into chainmail, stonework, and other trinkets. Their creations rival those of any other bygone ethos.

A collective of ten craftsmen created a legendary ar­tifact known as the Well of Dreams. From what can be learned from three dwarven elegies, the crowns of seven dwarf kings were melted into the structure of the well. And the artisans who created it had to forgo the very qualities that make them humane. They became husks of themselves; mere guardians, mindless in their goal of protecting the well from misuse or utter destruction.

The Well of Dreams is a doorway into the planescape of the multiverse. A one-way window that surveils the cos­mos and allows for interplanar journeys. The last elegy, though, says that those that use the well for selfish pur­poses are doomed to a life of despair and punishment. Such chastisement is not elaborated on but the poems of yore make it known that a steep price must be paid to use the Well of Dreams. A price of blood and tears.

The raw stone tunnel gives way to a descending staircase that leads to a grandiose hall. Two stone guardians bearing banners watch from the far wall.

The walls of this chamber are engraved with fine-print dwarven runes. Characters who speak Dwarvish can spend 1 hour deciphering the scripture. It talks of the creation myth of the Well of Dreams and of the fate of the artisans who crafted it. Lord Sigard is awed by these rev­elations and discloses that his goal is to reach a faraway plane to retrieve ingredients to create an alchemical con­coction commonly known as the philosopher’s stone.

The two statues with banners are magical gargoyle guardians that attack any non-dwarf trespasser.

Four plain, stone caskets line the hewn stone walls of this chamber. They lack any marks or engravings.

The master artisan dwarves (ghasts) who created the Well of Dreams arise from their nameless enclosures to protect the well from trespassers. These are mindless abominations that know no mercy or fear.

The dungeon’s vault has not been plundered even after eons and countless valiant visitors to the Well of Dreams.

Treasure. The vault contains 2,500 gp, 8,400 sp, a set of half-plate armor, two engraved longswords (75 each), two potions of healing, and a wand of magic detection.

This chamber was identical to area 3 but unnatural seis­mic activity from otyughs in the nearby tunnels caused the southwest wall to collapse. The master artisan dwarves (ghasts) in this area endlessly fight the tunnel aberration. When the characters reach this area, there are 1d4 undead guardians. The rest were destroyed by an otyugh earlier and have not regenerated yet.

5. Cave of the Otyugh

These tunnels lead into the depths of the earth. No one alive has traveled down those narrow passages and re­turned to tell the tale. These are the hunting grounds of a community of otyughs. Approaching the tunnels causes an otyugh to come snooping. It attacks any living crea­ture in a fit of territorial aggressiveness. They have be­come used to the constant attacks from the guardians.

Crossing the narrow hallways requires squeezing through them. The walls are decorated with intri­cate geometrical bas-reliefs and dwarvish runes.

This series of narrow hallways on the north and south side of the dungeon interconnect multiple areas. The characters must move through these pathways to reach areas 7 and 8, which is required to operate the Well of Dreams. Each time a creature passes through the tun­nels, there is a 2-in-6 chance that two shadows emerge from the deep cracks on the walls and attack.

A five-foot-tall, circular pedestal by the west wall dominates the room. Its sides and top are sculpted to portray a planar map and the hidden pathways that move from one dimension to the next.

To use the Well of Dreams, a person acquainted with magical knowledge must first operate the Circle of Syn­chronization in each of the rooms labeled area 7.

The person must stand on the pedestal and use their magical knowledge to attune to the strange device. A lo­cation to peek into or to travel to must be chosen at this point. To properly sync each pedestal to the chosen lo­cation, the operator must spend a spell slot or succeed on a DC 17 Arcana check. A failed synchronization may cause havoc when operating the Well of Dreams. The spirit of a master artisan (wraith) emerges to protect each Circle of Synchronization from trespassers.

The small chamber contains a closed-off valve on the wall and a brass plaque with instructions in Dwarvish. It explains that both valves must be opened for a magical liquid to flow into the Well of Dreams. It also says that the valves close by themselves at dawn, resetting the de­vice. Lord Sigard praises the device’s operation and says it is inventive and self-sustaining.

9. The Well of Dreams

A 10-foot-deep pond filled with a pink and purple liquid dominates the eerie chamber. Dozens of pa­pers sprawl over a stone table by the east wall.

Three of the entrances to this chamber are locked (DC 17 Thieves’ Tools). The southeast entrance’s lock has eroded beyond repair. Numerous individuals have visit­ed this place across the ages. It has become a custom that visitors sign the scrolls on the stone table and leave a message. Some of the messages warn future users against using the well in selfish ways. Others say that the well can either produce a dream of success, or a night­mare of reality. Alas, they do not elaborate further.

Lord Sigard is marveled by the Well of Dreams and wants to use it immediately, claiming first use of it. Af­ter aligning the Circles of Synchronization and opening the valves, the well shines in reverie. It is ready to use. Unless stopped, Lord Sigard jumps into the well and is transported to a faraway plane where his rare ingre­dients can be found. However, there is no way back for him. Characters that jump to his rescue fall into a vivid dream where they rescue him and succeed. But it is just a dream, powered by their selfless desire to help. Should the characters realign the well to be used differently, the GM is the sole judge of their actions. Self-serving goals are met with steep penalties. Good will is met with beau­tiful dreams; or maybe a true miracle of magic. 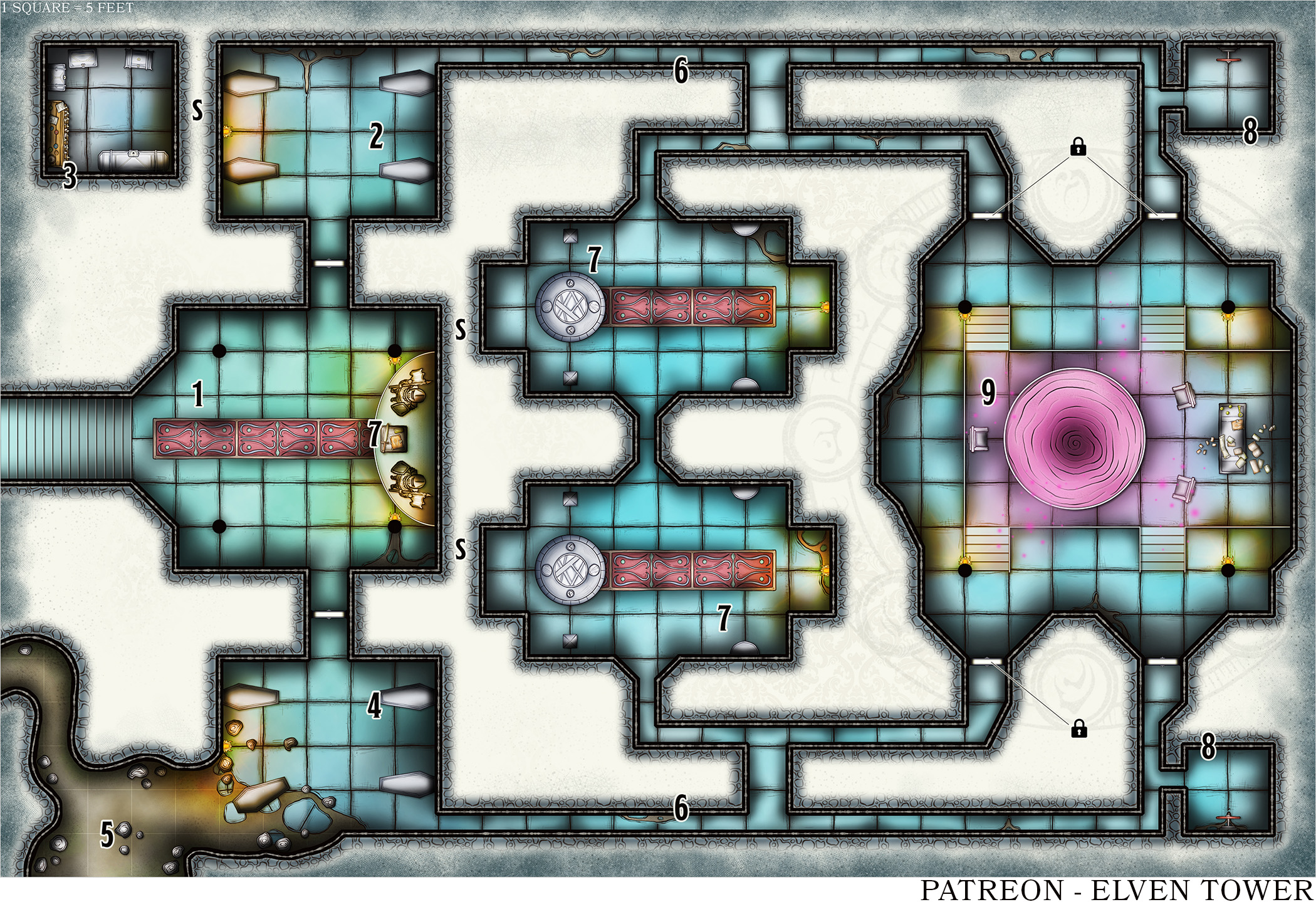