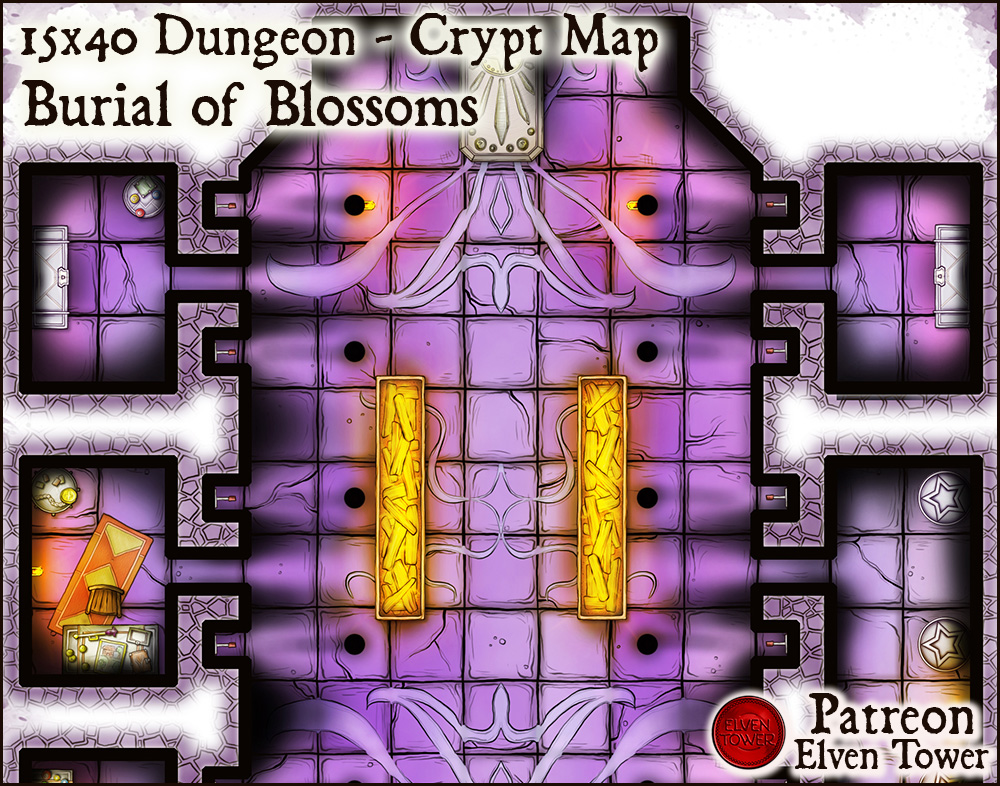 Your remains shall nurture immortal blossoms for eternity. They shall be your new eyes…

Curses are powerful magical incantations capable of bringing the most powerful individuals to their knees. In essence, they are magical hexes that target a chosen person or place, often in ways that are personal in na­ture. Curses are not a precise art among magic-users. Each curse is different. Its convoluted effects may vary according to the situation. Elvish curses are considered to be among the most gruesome to endure and remove.

The Seeds of Knowledge

The Sacred Seed is a cautionary tale that elvish par­ents often tell to their young offspring to teach them the consequences of evil deeds. In particular, the act of steal­ing and dabbling with ancient elvish relics.

The story tells the tale of an elf, Daerin, and his nu­merous friends and followers. They lived in the ancient Woodlands, beyond the ephemeral planar barriers of the Material Plane. They lived in a settlement by the roots of the great Tree of Knowledge. The fabled tree was tend­ed by other elves and fey creatures. It produced magical seeds that the elves would plant in other forests. Daer­in and his kin stole one of the Seeds of Knowledge and traveled to the Material Plane to hide. They cracked open the skin, cooked it, and ate it out of pure selfish pleasure.

From afar, the whole elvish community cursed them for eternity. Daerin and company led unfruitful lives with no shortage of pain and disappointments. They all met untimely deaths at the hands of their enemies and were then buried in a shunned crypt. Ravines and greenery grew on their resting places and blossomed gorgeous white roses. Deranged eyes sprouted from the flowers’ cores. The cursed elves can see through the disembod­ied eyes. But this doesn’t make them any less helpless.

Contrary to common belief, the Sacred Seed story is based on reality. It happened five thousand years ago. Daerin and his lot stole that seed and were cursed for eternity. After their deaths, the elves even built a crypt to store their remains and ensure that their eternal damna­tion would perdure. To this day, the tomb remains unex­plored as would be tomb-robbers are met with sudden death or flee in panic after visiting the first chamber.

The characters reach a large city and learn of the Flowery catacombs from the survivors of a team of plunderers. They found the entrance deep in the nearby forest and offer to accompany them there for a fee. Elf characters recognize the descriptions of the place from the Sacred Seed, an old elvish tale about a thief.

Features of the Catacombs

The following features correspond to the Flowery Cata­combs map; areas 1 through 12.

Doors. The locking systems in some doors still work (see padlock icons on the map). Only the best locksmiths can bypass them (DC 17 Thieves’ Tools).

Secret Passageways. The dungeon has several hidden corridors which can be revealed by pushing cleverly-hid­den bricks on the stone walls (DC 15 Investigation).

Smells and Sounds. The fragrances of orchids and lil­ies permeate the dungeon. A high-pitched, almost inau­dible, ephemeral melody comes from area 9.

An otherworldly altar of twisting vines and branch­es dominates the far side of the tomb. Strange flow­ers with blinking eyes grow on niches and urns.

The deranged flowery eyes blink in surprise when visi­tors arrive. The deranged souls that inhabit them envy the living after their eons-long torment. Four shadows, one specter, and one ghost emerge from the flowers and attack the characters. The undead and their enclosures reform at dawn if they are damaged or destroyed.

Treasure. The chests contain 800 gp. The bookcase contains a box of elvish spice (400 gp), a potion of great­er healing, and a spell scroll of tongues.

Characters can spend 1 hour reading the documentation in this room to find an accurate record of the events that lead to Daerin’s cursed existence and the names of thir­ty-three other elves who share Daerin’s fate.

The five strongest elvish warriors among Daerin’s group were interred here to honor their combat prowess. Flow­ery eyes give maddened looks from the enclosures. Five specters emerge from them. They behave in the same way as the undead found in area 1.

The empty stone chest features a glyph of warding. The runes explode when it is touched. Creatures within 20 feet take 5d8 fire damage (DC 14 Dexterity / half).

Four spellcasters among Daerin’s group were interred here. The standing sarcophagi are covered with vines and flowery eyes. These are the only mentally sane elves in the catacombs. They share their story if asked. The spirits claim that their curse can be lifted by pouring el­vish blood on the lid of Daerin’s sarcophagus in area 9.

The Seed of Knowledge is of such nature that it cannot be digested, nor does it ever abandon the body. After the cursed elves’ bodies were retrieved for burial, the seed fragments were surgically removed from the corpses and stored in this room. They lie scattered on the three stone plinths. The chunks are made of a quartz-like substance that refracts magical light. Pulling any of the three levers causes a floor slab to move and reveal a floor-niche. They contain ashes and a single flowery eye. Each spawns a shadow that attacks the characters.

The hallway contains four marble statues of elvish wom­en. Their names are scribed on brass plaques on the bas­es of each statue. Characters that read the documenta­tion in area 3 recognize the names. The four elves are a coven of powerful Woodlands witches. They cursed Daerin and his companions to their current fate and made sure their remains were brought here. The sculp­tures are a reminder to respect elvish law and elders.

Two rows of rune-scribed pillars flank the way to a stone sarcophagus. Vines grow from the enclosure’s base, to the far wall, and into the ceiling. Dozens of demented, blood-shot, green eyes gaze from above.

Daerin has lost his mind after his millennia-old imprison­ment in the catacombs. Contrary to the spirits in area 1, no one but the witches who cursed him has ever come to this great hall since he was placed here to rot for eternity. The levers on the walls open or close twelve floor-niches by the hewn stone walls. Daerin (wraith) and his twelve everlasting companions (shadows) emerge from cracks on the walls and unleash their fury on the characters. They fight until slain, knowing nothing but envy for the living. They crave what they lost thousands of years ago.

Defeating Daerin allows him a moment of sentience. He begs for mercy and says that a pint of elvish blood, voluntarily poured on the enclosure, shall release them.

The four witches who cursed Daerin’s group make a pil­grimage to the Flowery Catacombs every five hundred years. Customarily, they leave something of personal sig­nificance and leave a message. Their last visit occurred 221 years ago. From the logs, it appears that the witch­es enjoy seeing the cruel fate they brought upon Daerin. The records say the undead abominations cannot attack any of the witches or communicate with them in any way.

This chest contains valuable summer offerings made by the witches and their companions in the past.

This chest contains valuable winter offerings made by the witches and their companions in the past.

The characters defeat the undead abominations in the flowery catacombs and gain access to the valuable trea­sures therein. Their plundering triggers a magical alert and brings the attention of the elvish witches from the Woodlands Realm. They take notice of the characters and decide on how to deal with them. The consequences of this may not come to fruition for several months.

If an elf pours a pint of their blood on Daerin’s sarcoph­agus, the curse that assails the thirty-four elves is lifted. Their spirits commune in the great hall and thank the characters for their mercy and good hearts. This angers the coven of elvish witches. They shall take immediate action against the characters and attempt to curse them instead. But that is an adventure for another day…