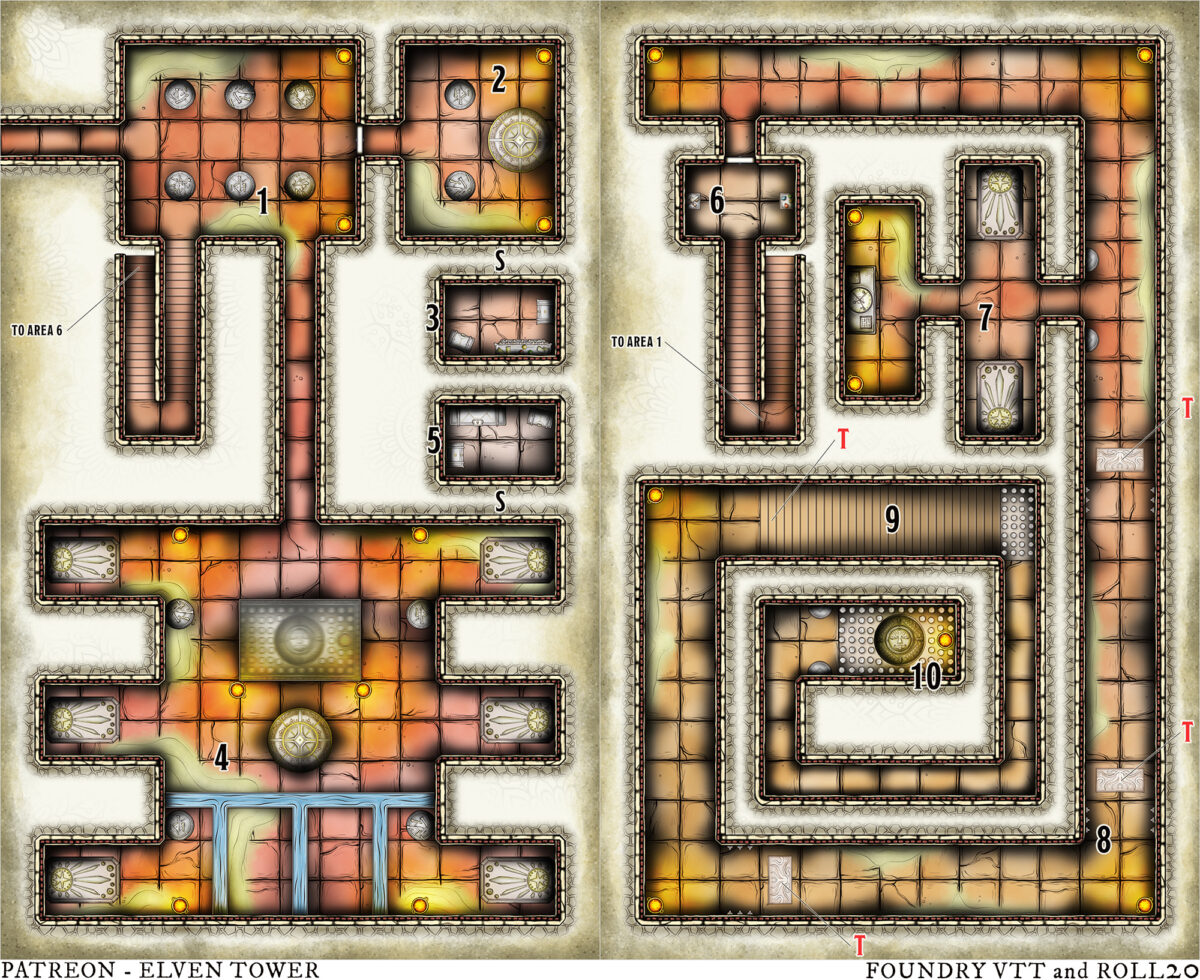 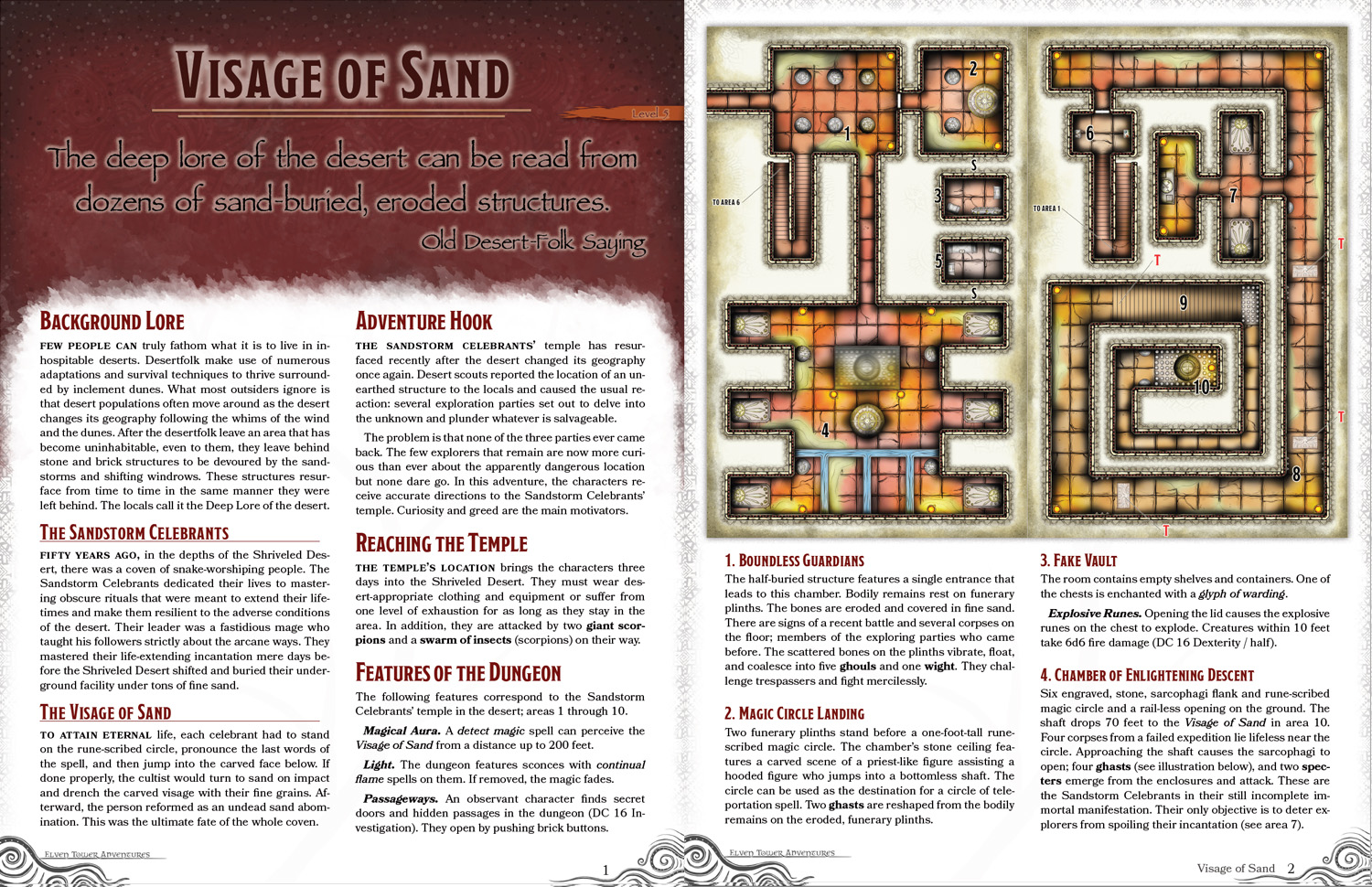 The deep lore of the desert can be read from dozens of sand-buried, eroded structures.

Few people can truly fathom what it is to live in in­hospitable deserts. Desertfolk make use of numerous adaptations and survival techniques to thrive surround­ed by inclement dunes. What most outsiders ignore is that desert populations often move around as the desert changes its geography following the whims of the wind and the dunes. After the desertfolk leave an area that has become uninhabitable, even to them, they leave behind stone and brick structures to be devoured by the sand­storms and shifting windrows. These structures resur­face from time to time in the same manner they were left behind. The locals call it the Deep Lore of the desert.

Fifty years ago, in the depths of the Shriveled Des­ert, there was a coven of snake-worshiping people. The Sandstorm Celebrants dedicated their lives to master­ing obscure rituals that were meant to extend their life­times and make them resilient to the adverse conditions of the desert. Their leader was a fastidious mage who taught his followers strictly about the arcane ways. They mastered their life-extending incantation mere days be­fore the Shriveled Desert shifted and buried their under­ground facility under tons of fine sand.

The Visage of Sand

To attain eternal life, each celebrant had to stand on the rune-scribed circle, pronounce the last words of the spell, and then jump into the carved face below. If done properly, the cultist would turn to sand on impact and drench the carved visage with their fine grains. Af­terward, the person reformed as an undead sand abom­ination. This was the ultimate fate of the whole coven.

The Sandstorm Celebrants’ temple has resur­faced recently after the desert changed its geography once again. Desert scouts reported the location of an un­earthed structure to the locals and caused the usual re­action: several exploration parties set out to delve into the unknown and plunder whatever is salvageable.

The problem is that none of the three parties ever came back. The few explorers that remain are now more curi­ous than ever about the apparently dangerous location but none dare go. In this adventure, the characters re­ceive accurate directions to the Sandstorm Celebrants’ temple. Curiosity and greed are the main motivators.

The temple’slocation brings the characters three days into the Shriveled Desert. They must wear des­ert-appropriate clothing and equipment or suffer from one level of exhaustion for as long as they stay in the area. In addition, they are attacked by two giant scor­pions and a swarm of insects (scorpions) on their way.

The following features correspond to the Sandstorm Celebrants’ temple in the desert; areas 1 through 10.

Magical Aura. A detect magic spell can perceive the Visage of Sand from a distance up to 200 feet.

The half-buried structure features a single entrance that leads to this chamber. Bodily remains rest on funerary plinths. The bones are eroded and covered in fine sand. There are signs of a recent battle and several corpses on the floor; members of the exploring parties who came before. The scattered bones on the plinths vibrate, float, and coalesce into five ghouls and one wight. They chal­lenge trespassers and fight mercilessly.

Two funerary plinths stand before a one-foot-tall rune-scribed magic circle. The chamber’s stone ceiling fea­tures a carved scene of a priest-like figure assisting a hooded figure who jumps into a bottomless shaft. The circle can be used as the destination for a circle of tele­portation spell. Two ghasts are reshaped from the bodily remains on the eroded, funerary plinths.

The room contains empty shelves and containers. One of the chests is enchanted with a glyph of warding.

Six engraved, stone, sarcophagi flank and rune-scribed magic circle and a rail-less opening on the ground. The shaft drops 70 feet to the Visage of Sand in area 10. Four corpses from a failed expedition lie lifeless near the circle. Approaching the shaft causes the sarcophagi to open; four ghasts (see illustration below), and two spec­ters emerge from the enclosures and attack. These are the Sandstorm Celebrants in their still incomplete im­mortal manifestation. Their only objective is to deter ex­plorers from spoiling their incantation (see area 7).

The secret passage is located under the northwest sar­cophagus. It contains three stone chests.

Treasure. The chests contain 2,400 gp, 11,320 sp, a collection of carved jade figurines (250 gp), a fine shorts­word with an emerald pommel (270 gp), a spell scroll of protection from energy, and two potions of healing.

A fine, ornate, brass key rests on each of the pedestals that flank the locked door. Using the right key to open the door causes the user to acquire two levels of exhaustion (DC 16 Constitution). The left key works normally.

7. Guardians of the Deep Lore

Two ghosts manifest weakly by their eroded enclosures. Their energy is low enough that they cannot directly in­teract with their surroundings. They signal creatures ap­proaching the west chamber to abandon the place imme­diately and make empty threats. Alas, they cannot stop the characters from snooping around. An accurate re­cord of the Sandstorm Celebrants’ eons-old incantation is carved on the stone table. A spellcaster that analyses it for 10 minutes understands the nature of their ritual and knows that they must endure an undead existence for 66 years until certain astral bodies align to signal the end of their penitence. After that, they shall be reborn in new immortal bodies. They also learn that the fragile spell spoils if someone tampers with the Visage of Sand.

The long twisting hallway features three pressure-sensi­tive plates that trigger independent dart-shooting mech­anisms. Stepping on any of the plates triggers a barrage of poisoned darts to fly from both walls. Creatures in the area suffer multiple hits and take 6d6 poison damage and are poisoned for 1 hour (DC 17 Constitution / half).

The second step is a pressure-sensitive device that caus­es the flight of stairs to shift shapes after a few seconds and become a 45-degree slide. Creatures on the stairs slide down to a 5-foot-deep pit with sharp spikes. They take 4d6 piercing damage (DC 14 Dexterity).

The strange artifact radiates a powerful magical aura. It accumulates power throughout the ages to release it when the Sandstorm Celebrants become immortal in 143 years. The mangled body of an explorer lies on the carved face. It fell from area 4 at least a week ago.

The End of Immortality

Deciphering the carvings in area 7 reveals that the Sand­storm Celebrants shall return as immortal creatures in the future (in 16 years). To thwart their plans, the char­acters can tamper with the delicate incantation in area 10. Spells such as dispel magic, protection from evil and good, or remove curse ruin the ancient ritual.

The Visage of Sand becomes an inert relic and the souls of all the celebrants are released into the ether. They do not resuscitate in the far future.

After one month of studying the Visage of Sand, a spellcaster learns enough information about the ancient ritual. The characters can then replicate the ritual and assist their companions on their fatal jump into the Vis­age of Sand. They join the celebrants’ undead ranks for 16 years and then are reborn in immortal vessels. The state of the world after such a long time is left to the GM’s discretion. It is an adventure for another time… 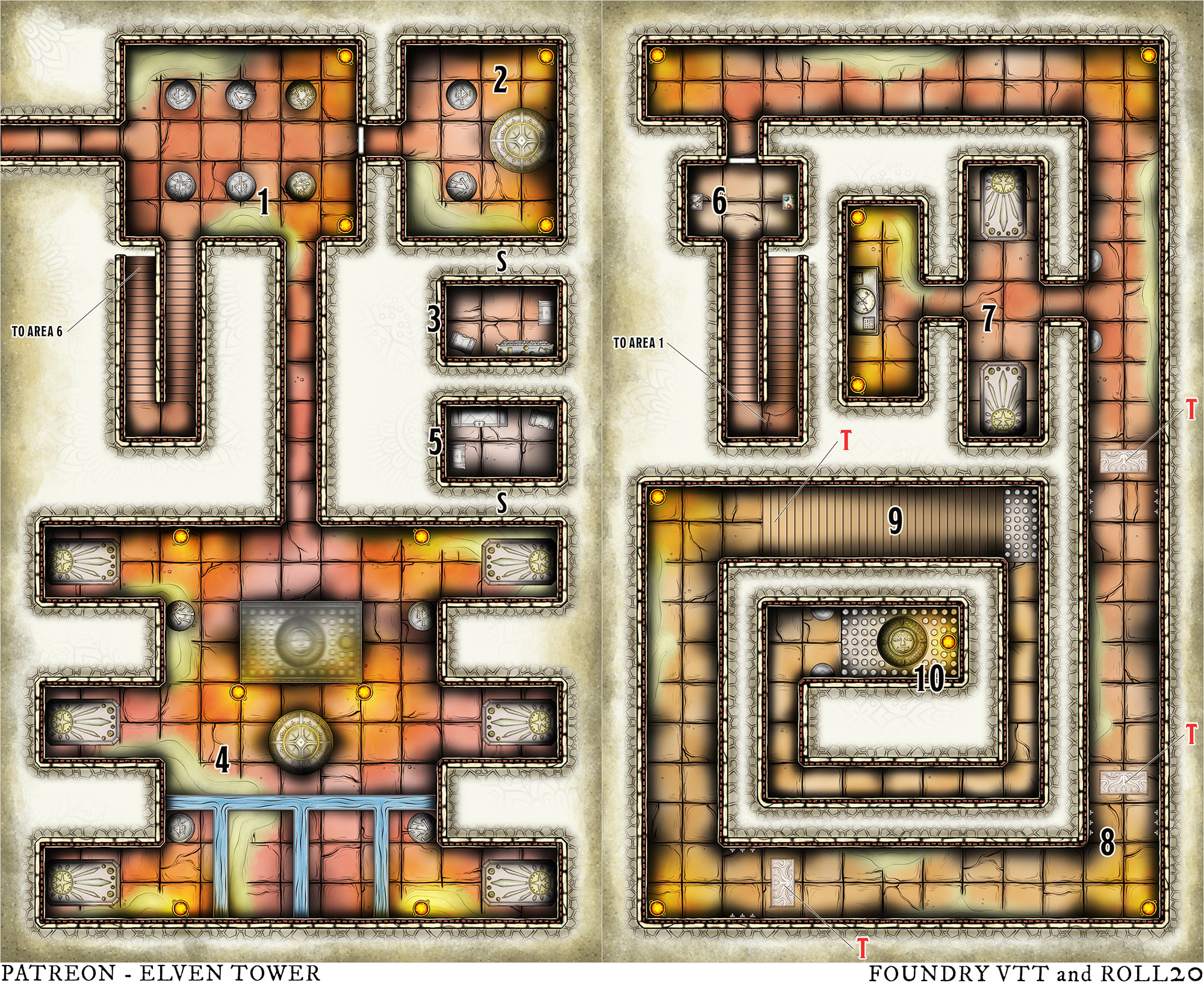