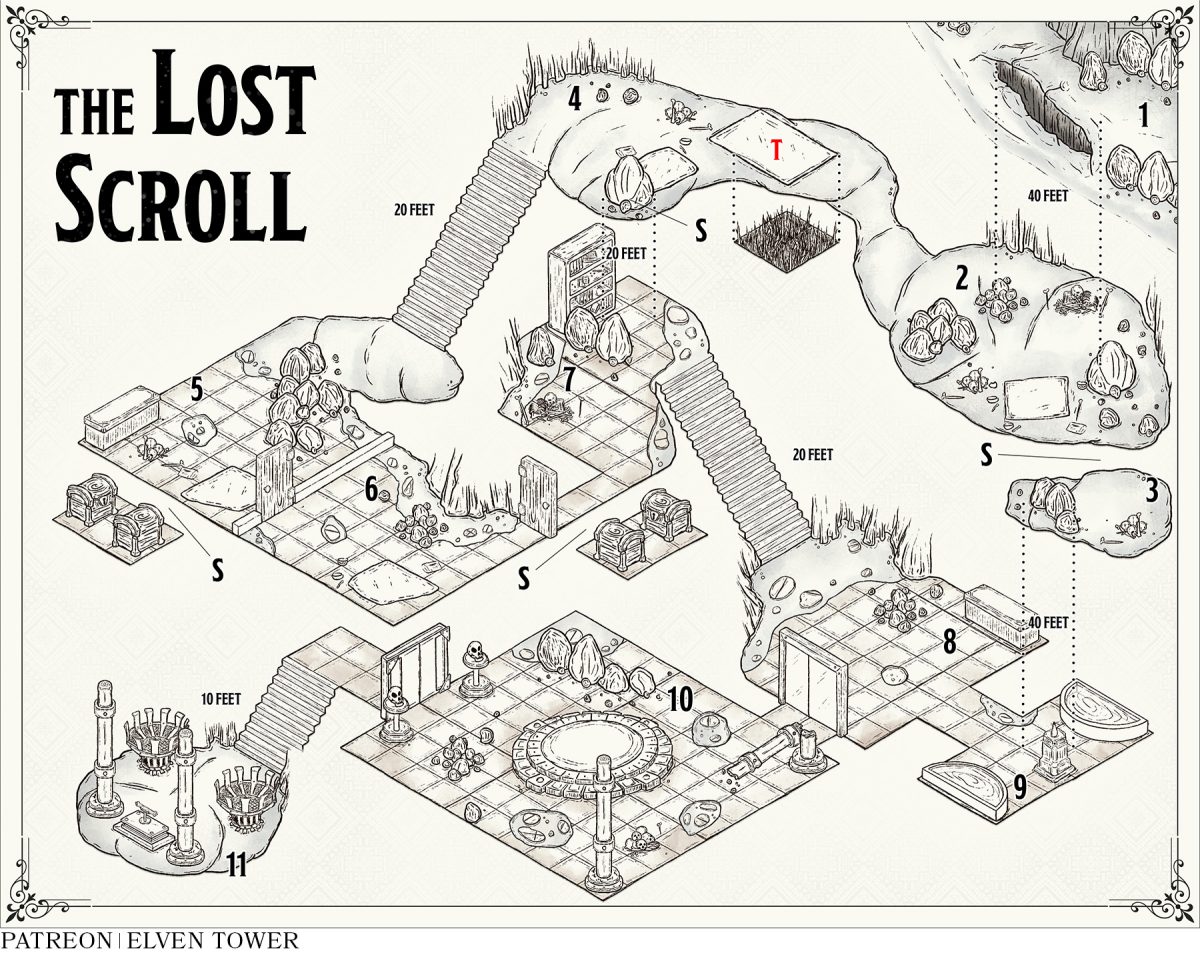 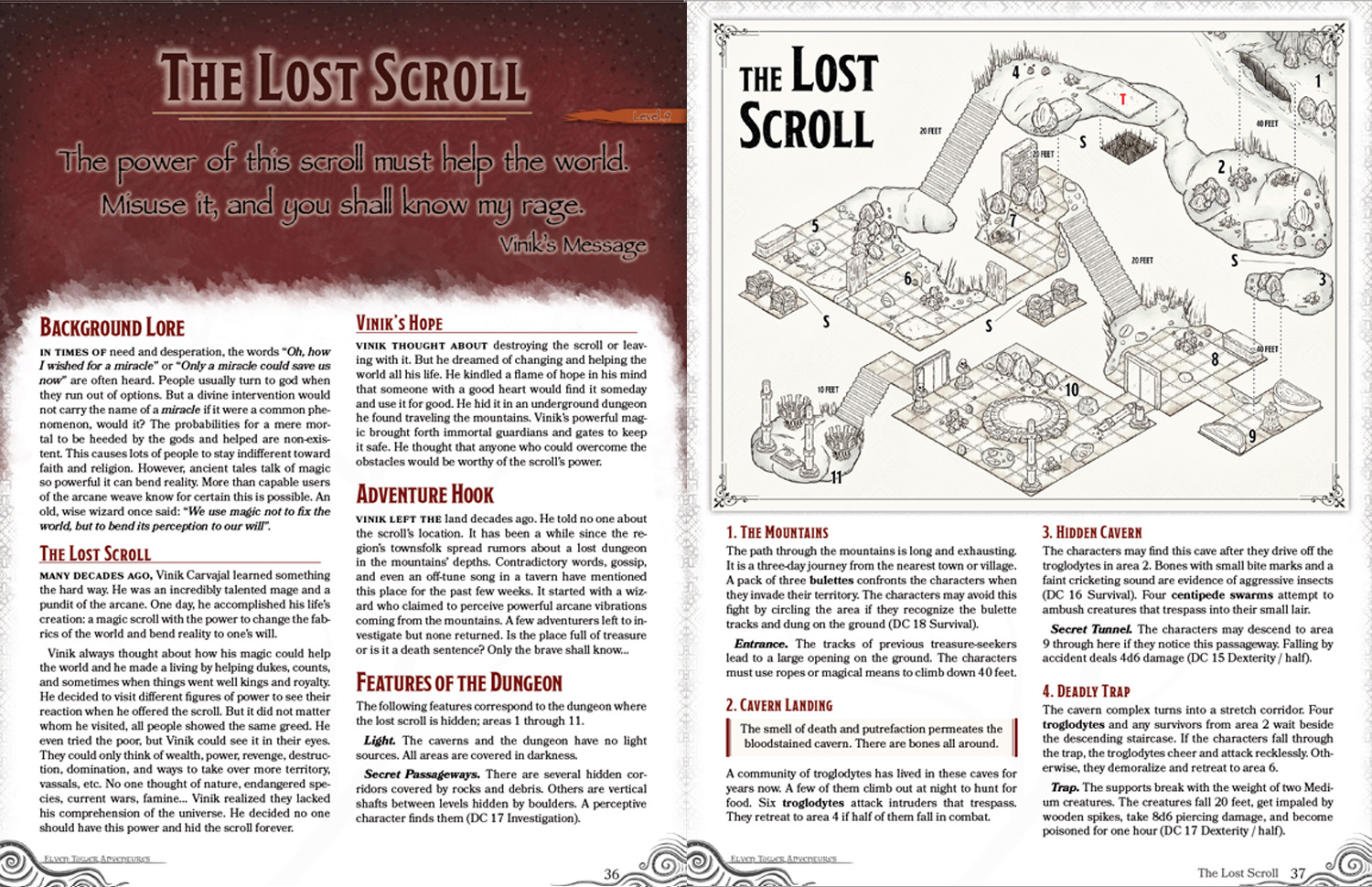 The power of this scroll must help the world. Misuse it, and you shall know my rage.

In times of need and desperation, the words “Oh, how I wished for a miracle” or “Only a miracle could save us now” are often heard. People usually turn to god when they run out of options. But a divine intervention would not carry the name of a miracle if it were a common phe­nomenon, would it? The probabilities for a mere mor­tal to be heeded by the gods and helped are non-exis­tent. This causes lots of people to stay indifferent toward faith and religion. However, ancient tales talk of magic so powerful it can bend reality. More than capable users of the arcane weave know for certain this is possible. An old, wise wizard once said: “We use magic not to fix the world, but to bend its perception to our will”.

Many decades ago, Vinik Carvajal learned something the hard way. He was an incredibly talented mage and a pundit of the arcane. One day, he accomplished his life’s creation: a magic scroll with the power to change the fab­rics of the world and bend reality to one’s will.

Vinik always thought about how his magic could help the world and he made a living by helping dukes, counts, and sometimes when things went well kings and royalty. He decided to visit different figures of power to see their reaction when he offered the scroll. But it did not matter whom he visited, all people showed the same greed. He even tried the poor, but Vinik could see it in their eyes. They could only think of wealth, power, revenge, destruc­tion, domination, and ways to take over more territory, vassals, etc. No one thought of nature, endangered spe­cies, current wars, famine… Vinik realized they lacked his comprehension of the universe. He decided no one should have this power and hid the scroll forever.

Vinik thought about destroying the scroll or leav­ing with it. But he dreamed of changing and helping the world all his life. He kindled a flame of hope in his mind that someone with a good heart would find it someday and use it for good. He hid it in an underground dungeon he found traveling the mountains. Vinik’s powerful mag­ic brought forth immortal guardians and gates to keep it safe. He thought that anyone who could overcome the obstacles would be worthy of the scroll’s power.

Vinik left the land decades ago. He told no one about the scroll’s location. It has been a while since the re­gion’s townsfolk spread rumors about a lost dungeon in the mountains’ depths. Contradictory words, gossip, and even an off-tune song in a tavern have mentioned this place for the past few weeks. It started with a wiz­ard who claimed to perceive powerful arcane vibrations coming from the mountains. A few adventurers left to in­vestigate but none returned. Is the place full of treasure or is it a death sentence? Only the brave shall know…

The following features correspond to the dungeon where the lost scroll is hidden; areas 1 through 11.

Light. The caverns and the dungeon have no light sources. All areas are covered in darkness.

Secret Passageways. There are several hidden cor­ridors covered by rocks and debris. Others are vertical shafts between levels hidden by boulders. A perceptive character finds them (DC 17 Investigation).

The path through the mountains is long and exhausting. It is a three-day journey from the nearest town or village. A pack of three bulettes confronts the characters when they invade their territory. The characters may avoid this fight by circling the area if they recognize the bulette tracks and dung on the ground (DC 18 Survival).

Entrance. The tracks of previous treasure-seekers lead to a large opening on the ground. The characters must use ropes or magical means to climb down 40 feet.

The smell of death and putrefaction permeates the bloodstained cavern. There are bones all around.

A community of troglodytes has lived in these caves for years now. A few of them climb out at night to hunt for food. Six troglodytes attack intruders that trespass. They retreat to area 4 if half of them fall in combat.

The characters may find this cave after they drive off the troglodytes in area 2. Bones with small bite marks and a faint cricketing sound are evidence of aggressive insects (DC 16 Survival). Four centipede swarms attempt to ambush creatures that trespass into their small lair.

Secret Tunnel. The characters may descend to area 9 through here if they notice this passageway. Falling by accident deals 4d6 damage (DC 15 Dexterity / half).

The cavern complex turns into a stretch corridor. Four troglodytes and any survivors from area 2 wait beside the descending staircase. If the characters fall through the trap, the troglodytes cheer and attack recklessly. Oth­erwise, they demoralize and retreat to area 6.

Trap. The supports break with the weight of two Medi­um creatures. The creatures fall 20 feet, get impaled by wooden spikes, take 8d6 piercing damage, and become poisoned for one hour (DC 17 Dexterity / half).

Cave-ins and time have turned this place into ruins. The presence of plagues and troglodytes did not help. Bones, debris, and rocks cover the ground.

Four troglodytes halt intruders here. Any other survi­vor from previous encounters fights here well. This time, they do not flee or surrender at any cost. They give their lives to defend the females and younglings in area 6.

Treasure. The chests in this area contain a collection of oil paintings, works of art, and fine books and tomes. The whole lot is worth 3,000 gp to the right vendor.

Several humanoid individuals in fetal positions hide here. Troglodyte mothers protect their younglings with their bodies, hoping to make it out alive.

Thirty non-combatant troglodytes hide here. They sur­render and display no signs of violence. They prefer to escape alive if possible before engaging in combat.

Treasure. The chests in this area contain leather bags with a total of 2,000 gp. There are two random level 3 wizard spell scrolls and three potions of greater healing.

The room has pieces of furniture lying on the ground in shambles along with rocks and bones.

Vinik stored some things here decades ago. If the char­acters search the place (DC 17 Investigation), they find the fragment of a page with exquisite handwriting:

“…only hope that this power benefits the world. I wish it falls on the right hands. For I shall return to chastise whoever uses my creation to accomplish selfish goals”.

The rest of the books, tomes, and documents are too fad­ed to be read, or turn to dust at the softest touch.

At the stairs base, cave-ins and rock slides have de­stroyed entire sections of the walls of this chamber.

A double crystal door with a glowing inscription blocks the way west while a small corridor to the south takes to a stone pedestal (area 9). The troglodytes never descend to this level. They shun the glowing message they do not understand and the energies that radiate from area 10.

Two ponds with fresh, clear water flank a stone pedes­tal displaying a small vial. Drinking from either fountain works like a potion of heroism for 10 minutes. A detect magic spell identifies the vial as oil of etherealness.

A metallic plate on the wall reads:

“Beyond these doors lies an artifact with the power to change the world. But first, you must prove your strength and your worth. Know that this power must be used for selfless reasons that benefit others. Otherwise, run and hide, for you shall know Vinik Carvajal’s wrath”.

This section of the complex is colder; it evokes an aura of brooding uneasiness. The skulls’ emerald eyes beside the steel doors follow all creatures.

The magic circle glows when the characters cross the threshold. Vinik’s magic reanimates the two skulls on the pedestals. The flame skulls float while several shad­ows and dark shapes coalesce into three wraiths. The rocks coalesce into an earth elemental as well.

The reinforced steel doors that lead to area 11 are magically locked. Defeating all enemies in this area lifts the magic lock. Otherwise, the characters can use a level 4 dispel magic or knock spells to force them open.

The bronze base shines under the braziers’ light. A gold­en scroll-shaped container rests on its top. The charac­ters find Vinik’s treasure. A spell scroll of wish.

The characters reach the end of this adventure with the power to fulfill any wish they have. The nature and in­terpretation of the wish are up to the GM’s discretion.

The characters may use Vinik’s scroll and change the world. They must abandon all ideas about resurrect­ing a fallen comrade or changing the outcome of a bat­tle they lost before. Their wish must be selfless and help the world, not themselves, or else they shall be doomed.

The characters waste their wish in a selfish way. Vinik Carvajal (archmage) shall hunt them and make them pay for their ignorance. How the characters deal with the angry wizard, is an adventure for another day… 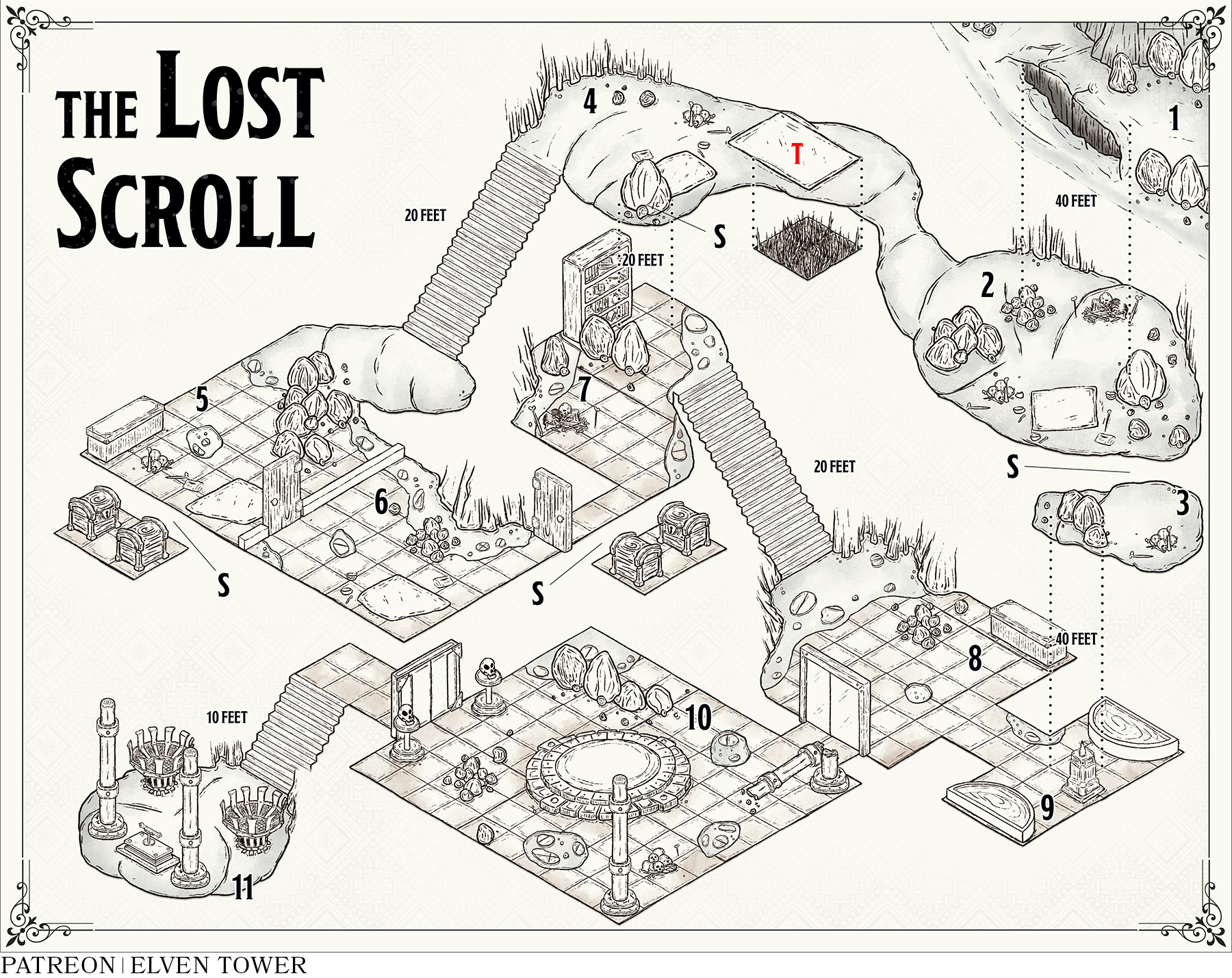