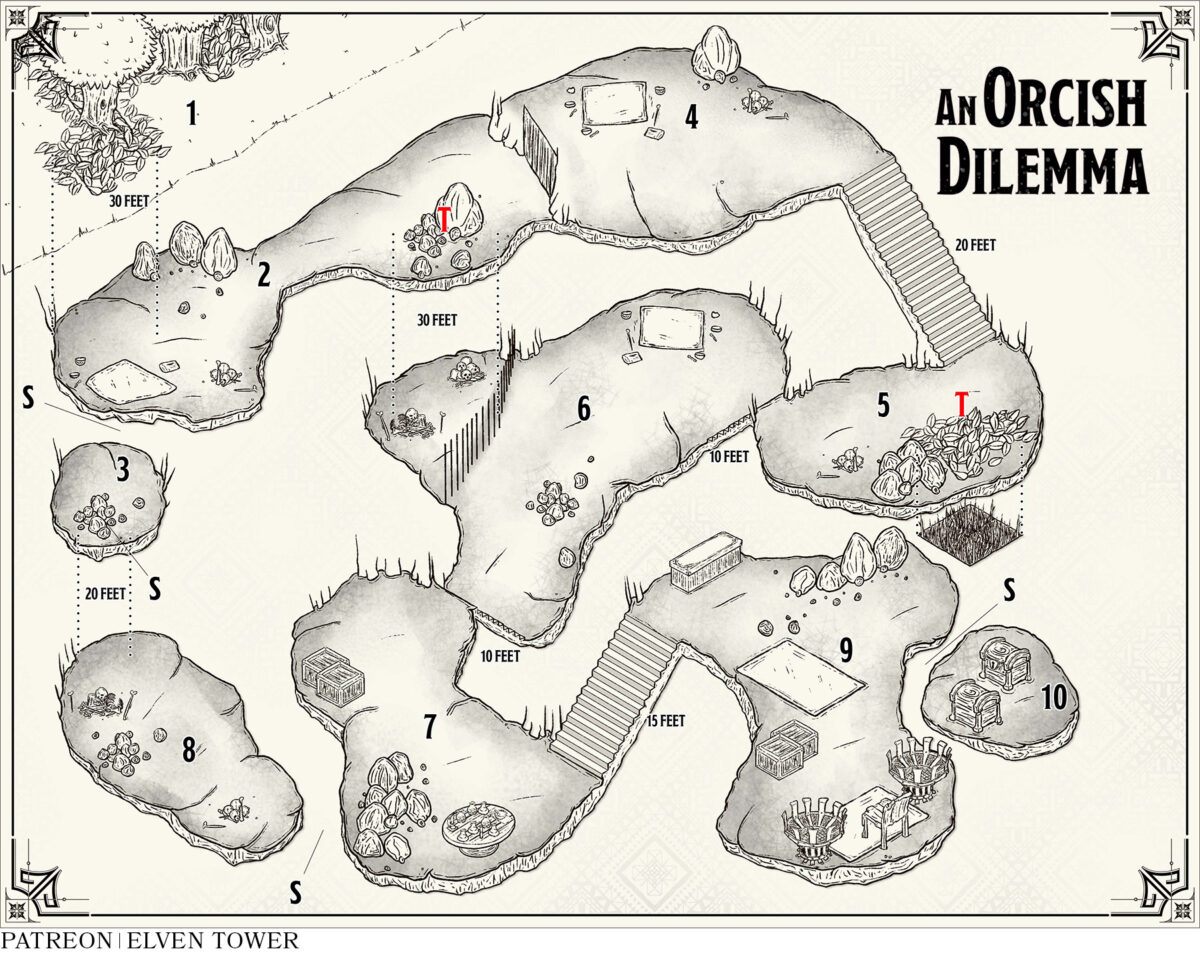 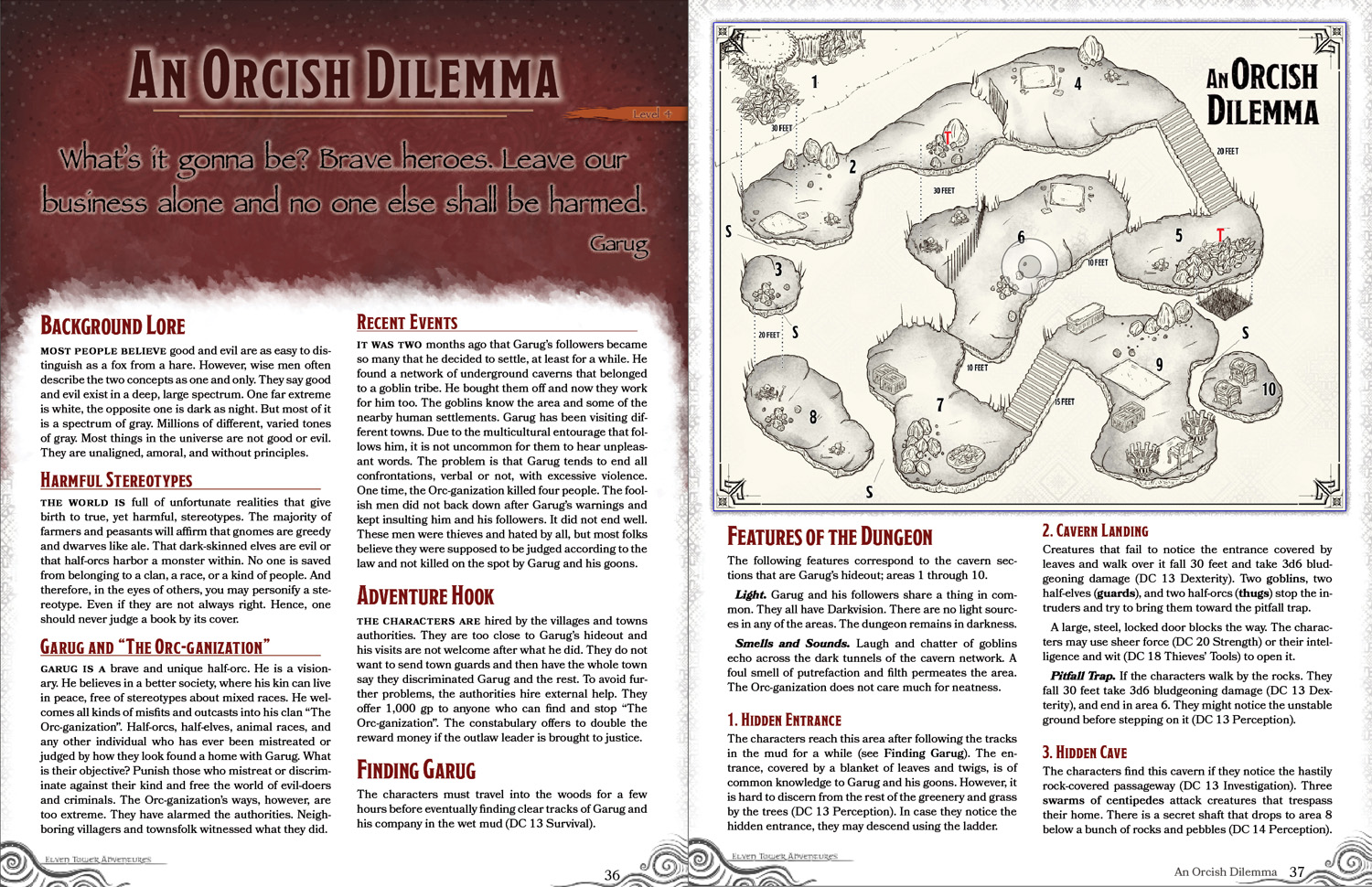 What’s it gonna be? Brave heroes. Leave our business alone and no one else shall be harmed.

Most people believe good and evil are as easy to dis­tinguish as a fox from a hare. However, wise men often describe the two concepts as one and only. They say good and evil exist in a deep, large spectrum. One far extreme is white, the opposite one is dark as night. But most of it is a spectrum of gray. Millions of different, varied tones of gray. Most things in the universe are not good or evil. They are unaligned, amoral, and without principles.

The world is full of unfortunate realities that give birth to true, yet harmful, stereotypes. The majority of farmers and peasants will affirm that gnomes are greedy and dwarves like ale. That dark-skinned elves are evil or that half-orcs harbor a monster within. No one is saved from belonging to a clan, a race, or a kind of people. And therefore, in the eyes of others, you may personify a ste­reotype. Even if they are not always right. Hence, one should never judge a book by its cover.

Garug is a brave and unique half-orc. He is a vision­ary. He believes in a better society, where his kin can live in peace, free of stereotypes about mixed races. He wel­comes all kinds of misfits and outcasts into his clan “The Orc-ganization”. Half-orcs, half-elves, animal races, and any other individual who has ever been mistreated or judged by how they look found a home with Garug. What is their objective? Punish those who mistreat or discrim­inate against their kind and free the world of evil-doers and criminals. The Orc-ganization’s ways, however, are too extreme. They have alarmed the authorities. Neigh­boring villagers and townsfolk witnessed what they did.

It was two months ago that Garug’s followers became so many that he decided to settle, at least for a while. He found a network of underground caverns that belonged to a goblin tribe. He bought them off and now they work for him too. The goblins know the area and some of the nearby human settlements. Garug has been visiting dif­ferent towns. Due to the multicultural entourage that fol­lows him, it is not uncommon for them to hear unpleas­ant words. The problem is that Garug tends to end all confrontations, verbal or not, with excessive violence. One time, the Orc-ganization killed four people. The fool­ish men did not back down after Garug’s warnings and kept insulting him and his followers. It did not end well. These men were thieves and hated by all, but most folks believe they were supposed to be judged according to the law and not killed on the spot by Garug and his goons.

The characters are hired by the villages and towns authorities. They are too close to Garug’s hideout and his visits are not welcome after what he did. They do not want to send town guards and then have the whole town say they discriminated Garug and the rest. To avoid fur­ther problems, the authorities hire external help. They offer 1,000 gp to anyone who can find and stop “The Orc-ganization”. The constabulary offers to double the reward money if the outlaw leader is brought to justice.

The characters must travel into the woods for a few hours before eventually finding clear tracks of Garug and his company in the wet mud (DC 13 Survival).

The following features correspond to the cavern sec­tions that are Garug’s hideout; areas 1 through 10.

Light. Garug and his followers share a thing in com­mon. They all have Darkvision. There are no light sourc­es in any of the areas. The dungeon remains in darkness.

Smells and Sounds. Laugh and chatter of goblins echo across the dark tunnels of the cavern network. A foul smell of putrefaction and filth permeates the area. The Orc-ganization does not care much for neatness.

The characters reach this area after following the tracks in the mud for a while (see Finding Garug). The en­trance, covered by a blanket of leaves and twigs, is of common knowledge to Garug and his goons. However, it is hard to discern from the rest of the greenery and grass by the trees (DC 13 Perception). In case they notice the hidden entrance, they may descend using the ladder.

Creatures that fail to notice the entrance covered by leaves and walk over it fall 30 feet and take 3d6 blud­geoning damage (DC 13 Dexterity). Two goblins, two half-elves (guards), and two half-orcs (thugs) stop the in­truders and try to bring them toward the pitfall trap.

A large, steel, locked door blocks the way. The charac­ters may use sheer force (DC 20 Strength) or their intel­ligence and wit (DC 18 Thieves’ Tools) to open it.

Pitfall Trap. If the characters walk by the rocks. They fall 30 feet take 3d6 bludgeoning damage (DC 13 Dex­terity), and end in area 6. They might notice the unstable ground before stepping on it (DC 13 Perception).

The characters find this cavern if they notice the hastily rock-covered passageway (DC 13 Investigation). Three swarms of centipedes attack creatures that trespass their home. There is a secret shaft that drops to area 8 below a bunch of rocks and pebbles (DC 14 Perception).

Retreat. If half the troops fall in combat, they lose mo­rale and retreat to area 6 to join their comrades there. They hope that if the intruders pursue them, they may fall into the leaf-covered trap in area 5 (see below).

Three orcs, the only pure-blood orcs in the Orc-ganiza­tion, defend this place. They agree with Garug’s philoso­phy as they have been discriminated against too.

Rusty iron bars were buried in the ground to make an improvised cell. Garug keeps three people as prisoners at the moment. Three half-orcs (thugs) defend the cell along with any other enemy who retreated here.

To reach Garug, this cavern must be traversed even if the characters find the secret passage in area 8. Two half-orcs (thugs) with heavy crossbows guard the stairs that ascend to area 9. Garug attempts to parley from there.

Garug and his goons do not know this cave exists. If the characters manage to get here, they might bypass most of Garug’s security and surprise him by taking the secret tunnel that connects with area 7 (DC 14 Perception). However, this is the home of three giant centipedes and two swarms of centipedes. The indigenous insects do not chase prey outside this cavern, though.

From the top of the stairs, Garug explains the current sit­uation to the characters in the following manner:

“And so they come at last! They want to end us. Just because we are different! We did not ask to be born the way we are, yet here we stand. You would destroy the Orc-ganization just to earn some gold. We spend our lives fighting corruption and discrim­ination. We vanquish evil and stop criminals. They did not tell you that, did they? Our methods may be violent, yes. But say, how many of my men did you violently beat to get to me? So, what’s it gonna be? Brave heroes… We only hurt bad people! Let our business alone and no one else shall be harmed”.

If the characters agree with Garug they may negotiate with him (see The Gray Side of the Spectrum). Oth­erwise, they shall fight Garug (bandit leader), the two thugs with crossbows, a kenku (scout), and six other mixed-race individuals (bandits). They are ready to give it all for their cause. Life has always been cruel to them.

Treasure. Garug and company possess many valuable items such as bracelets, leather coin purses, a few silver­ware pieces, etc. (The lot is worth 762 gp). The charac­ters may only take this if they defeat everyone.

The characters find this cavern if they notice the rock-cov­ered passageway to the vault (DC 13 Investigation).

The Gray Side of the Spectrum

If the characters defeat, kill, or capture Garug and his men, they are paid the agreed-upon amount. However, that makes them no better than him. However, it may be that the characters share Garug’s point of view and agree to negotiate a deal with the Orc-ganization’s leader. How­ever, that is an adventure for another day. 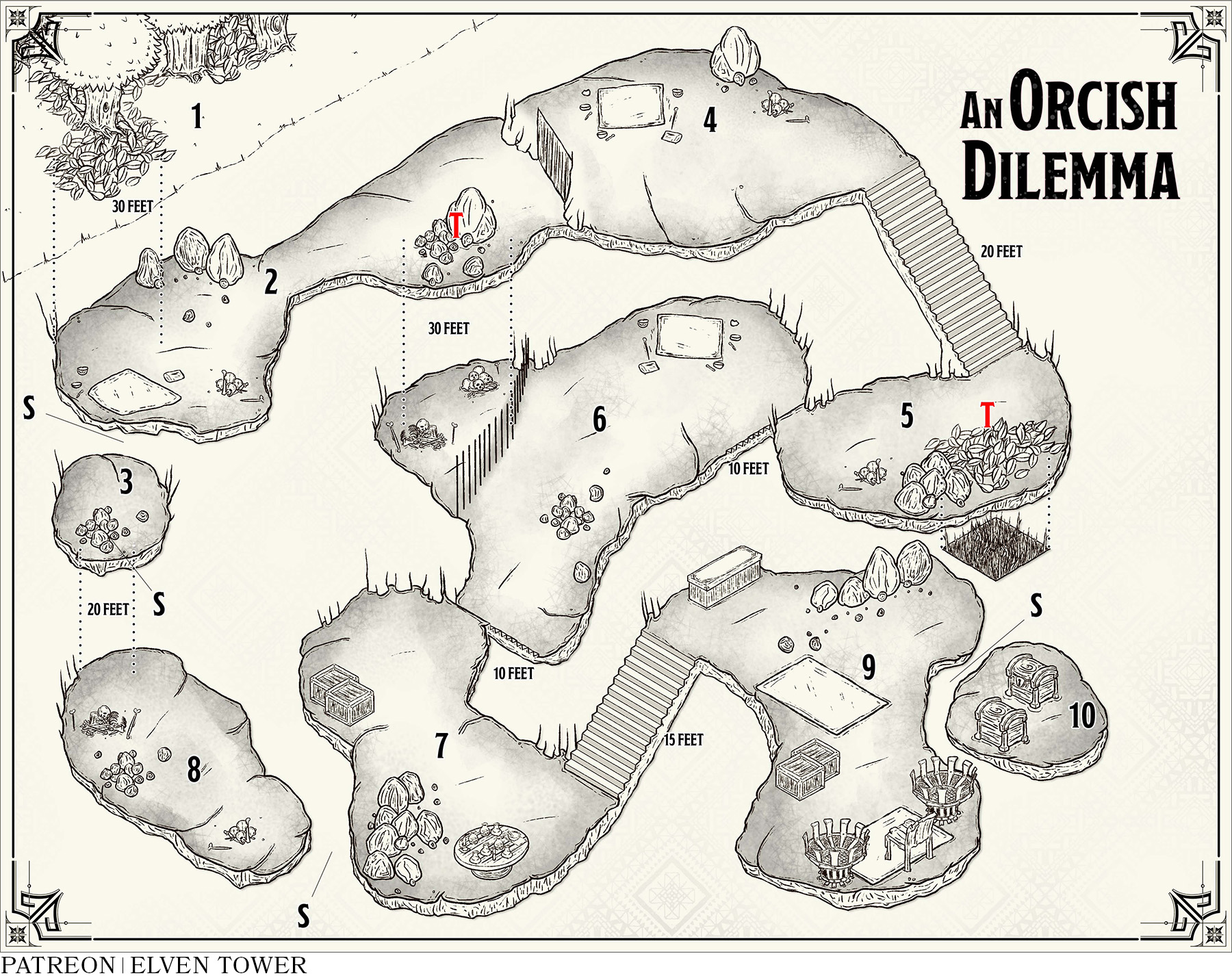