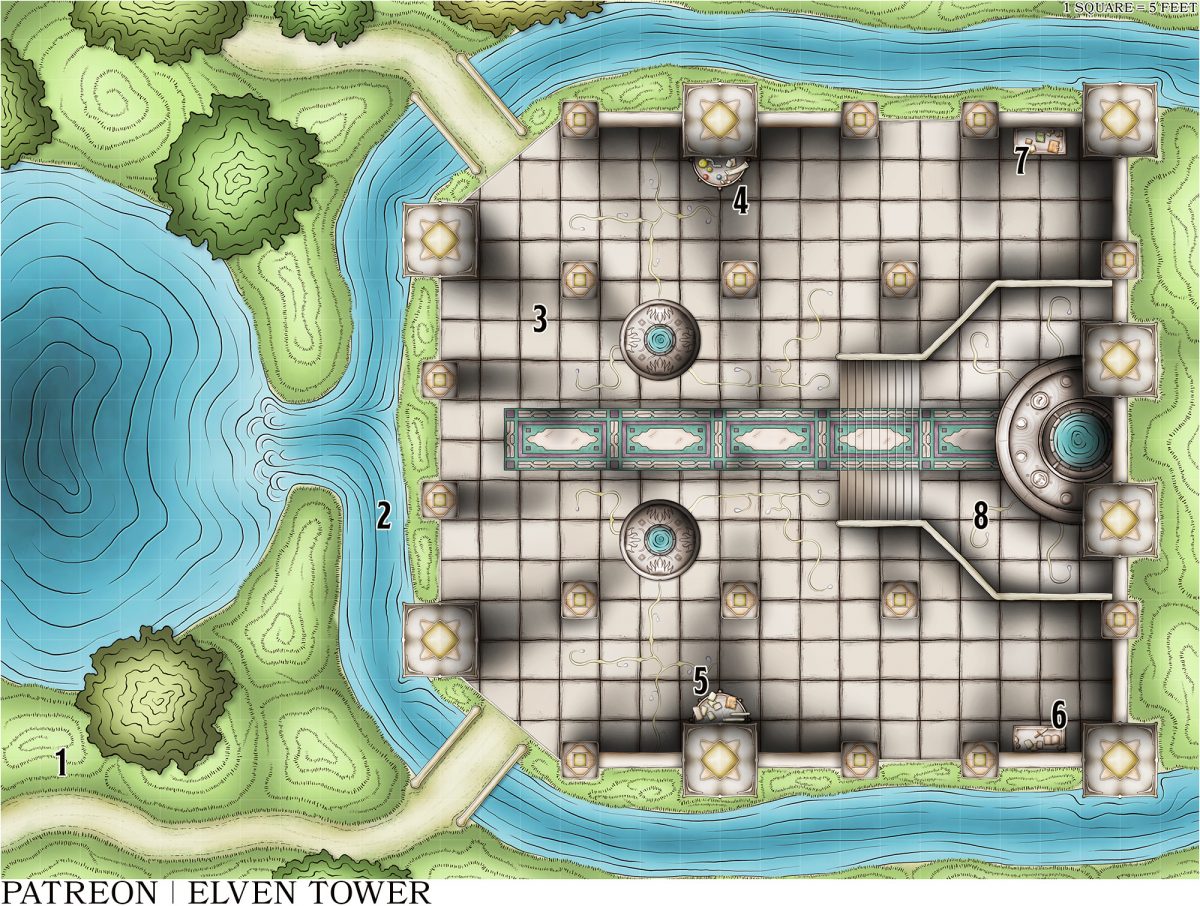 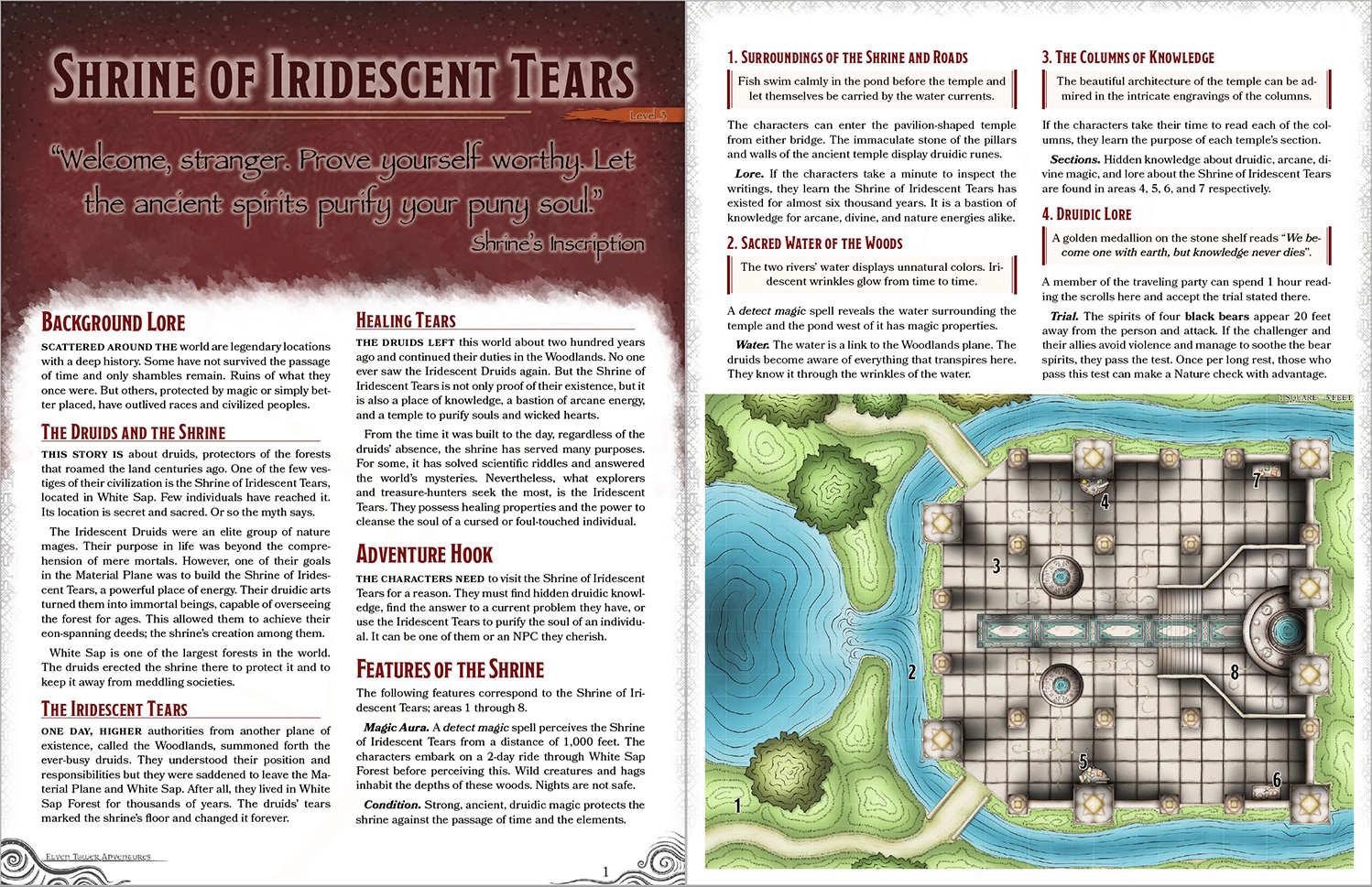 Scattered around the world are legendary locations with a deep history. Some have not survived the passage of time and only shambles remain. Ruins of what they once were. But others, protected by magic or simply better placed, have outlived races and civilized peoples.

The Druids and the Shrine

This story is about druids, protectors of the forests that roamed the land centuries ago. One of the few vestiges of their civilization is the Shrine of Iridescent Tears, located in White Sap. Few individuals have reached it. Its location is secret and sacred. Or so the myth says.

The Iridescent Druids were an elite group of nature mages. Their purpose in life was beyond the comprehension of mere mortals. However, one of their goals in the Material Plane was to build the Shrine of Iridescent Tears, a powerful place of energy. Their druidic arts turned them into immortal beings, capable of overseeing the forest for ages. This allowed them to achieve their eon-spanning deeds; the shrine’s creation among them.

White Sap is one of the largest forests in the world. The druids erected the shrine there to protect it and to keep it away from meddling societies.

One day, higher authorities from another plane of existence, called the Woodlands, summoned forth the ever-busy druids. They understood their position and responsibilities but they were saddened to leave the Material Plane and White Sap. After all, they lived in White Sap Forest for thousands of years. The druids’ tears marked the shrine’s floor and changed it forever.

The druids left this world about two hundred years ago and continued their duties in the Woodlands. No one ever saw the Iridescent Druids again. But the Shrine of Iridescent Tears is not only proof of their existence, but it is also a place of knowledge, a bastion of arcane energy, and a temple to purify souls and wicked hearts.

From the time it was built to the day, regardless of the druids’ absence, the shrine has served many purposes. For some, it has solved scientific riddles and answered the world’s mysteries. Nevertheless, what explorers and treasure-hunters seek the most, is the Iridescent Tears. They possess healing properties and the power to cleanse the soul of a cursed or foul-touched individual.

The characters need to visit the Shrine of Iridescent Tears for a reason. They must find hidden druidic knowledge, find the answer to a current problem they have, or use the Iridescent Tears to purify the soul of an individual. It can be one of them or an NPC they cherish.

Features of the Shrine

The following features correspond to the Shrine of Iridescent Tears; areas 1 through 8.

Magic Aura. A detect magic spell perceives the Shrine of Iridescent Tears from a distance of 1,000 feet. The characters embark on a 2-day ride through White Sap Forest before perceiving this. Wild creatures and hags inhabit the depths of these woods. Nights are not safe.

Condition. Strong, ancient, druidic magic protects the shrine against the passage of time and the elements.

1. Surroundings of the Shrine and Roads

Fish swim calmly in the pond before the temple and let themselves be carried by the water currents.

The characters can enter the pavilion-shaped temple from either bridge. The immaculate stone of the pillars and walls of the ancient temple display druidic runes.

Lore. If the characters take a minute to inspect the writings, they learn the Shrine of Iridescent Tears has existed for almost six thousand years. It is a bastion of knowledge for arcane, divine, and nature energies alike.

2. Sacred Water of the Woods

A detect magic spell reveals the water surrounding the temple and the pond west of it has magic properties.

Water. The water is a link to the Woodlands plane. The druids become aware of everything that transpires here. They know it through the wrinkles of the water.

3. The Columns of Knowledge

The beautiful architecture of the temple can be admired in the intricate engravings of the columns.

If the characters take their time to read each of the columns, they learn the purpose of each temple’s section.

Sections. Hidden knowledge about druidic, arcane, divine magic, and lore about the Shrine of Iridescent Tears are found in areas 4, 5, 6, and 7 respectively.

A golden medallion on the stone shelf reads “We become one with earth, but knowledge never dies”.

A member of the traveling party can spend 1 hour reading the scrolls here and accept the trial stated there.

Trial. The spirits of four black bears appear 20 feet away from the person and attack. If the challenger and their allies avoid violence and manage to soothe the bear spirits, they pass the test. Once per long rest, those who pass this test can make a Nature check with advantage.

An arcane spellcaster recognizes the runes and ancient symbols here in 1 hour. They understand the words they must pronounce to accept the trials of the arcane.

Trial. A dust mephit, an ice mephit, a magma mephit, and a steam mephit appear. The elemental guardians must be destroyed with arcane magic to pass the test. Once per long rest, arcane spellcasters that passed this test can make an Arcana check with advantage.

A ritual dagger accompanies papers with the druids of yore’s research about the divine energies.

A cleric in the party can meditate for 1 hour here to accept the trial set by the druids that left two centuries ago.

Trial. Eight skeletons materialize and attack. If the holy warrior can turn at least one of them, they pass the trial. Once per long rest, clerics or paladins that passed this test can make a Religion check with advantage.

The information about the Shrine of Iridescent Tears is scattered among the papers and tomes here. It takes 1 hour to read and understand the ancient writings.

8. The Shrine of Iridescent Tears

The beautiful architecture of the shrine flanks the main basin. Ancient druidic symbols of protection glow with every wrinkle of the pool of tears.

Only the strong and worthy can be purified and cleansed. The spirit of a druid and two awakened trees must be defeated to use the pool. Characters that read the information in area 7 know that drinking one ounce of the tears benefit from the effects of a greater restoration spell, a remove curse spell, and regain all their hit points.

The characters defeat the druid’s spirit and the trees. They gain access to the healing waters of the Iridescent Tears for their display of bravery and strength. If ever they wish to return, the challenges shall be greater.

If The characters fail to defeat the druid, magic teleports them outside of White Sap Forest. If they bring to the sacred temple, the waters shall inform the ancient druids of the characters’ transgression. They shall pay. 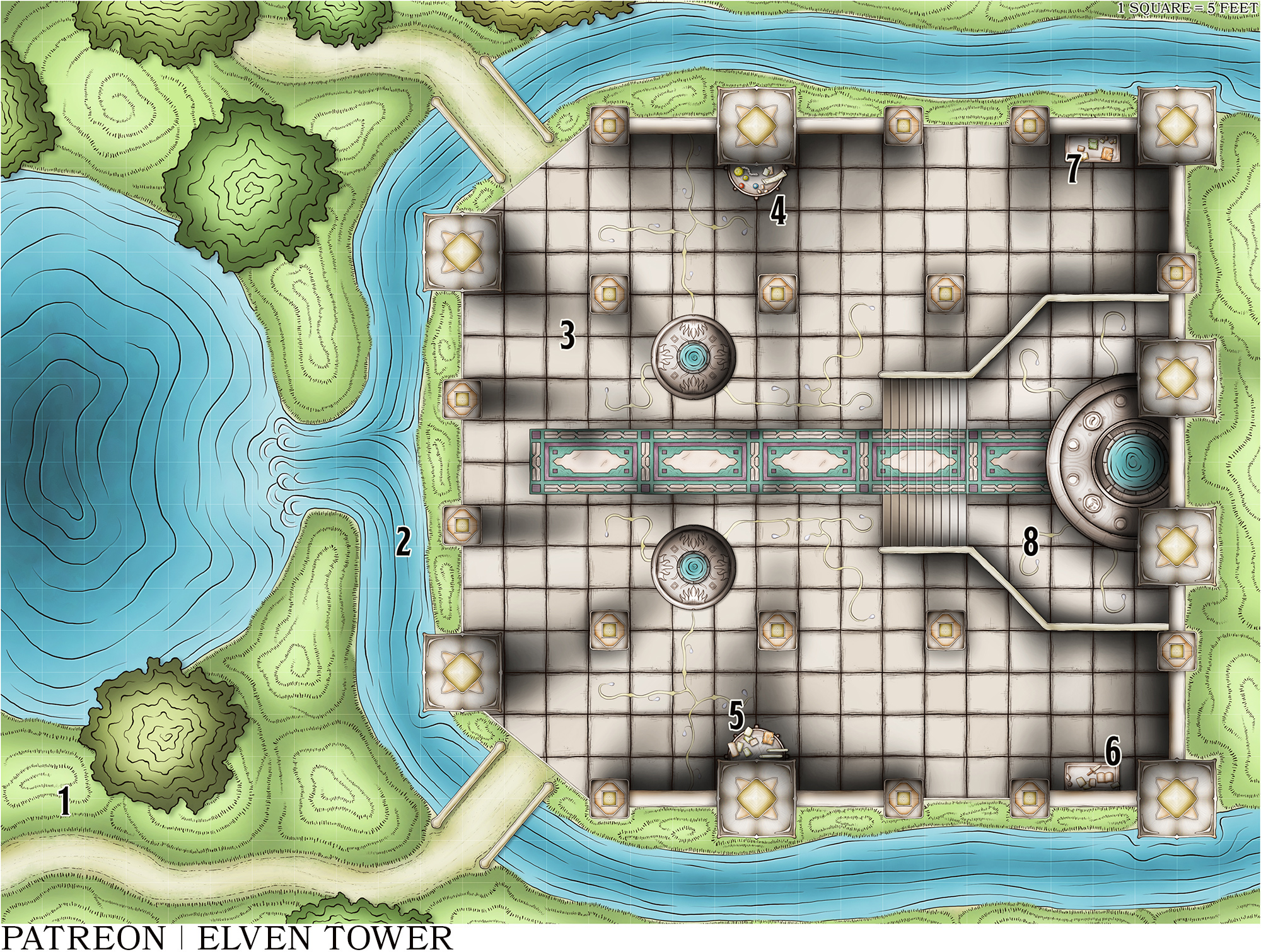