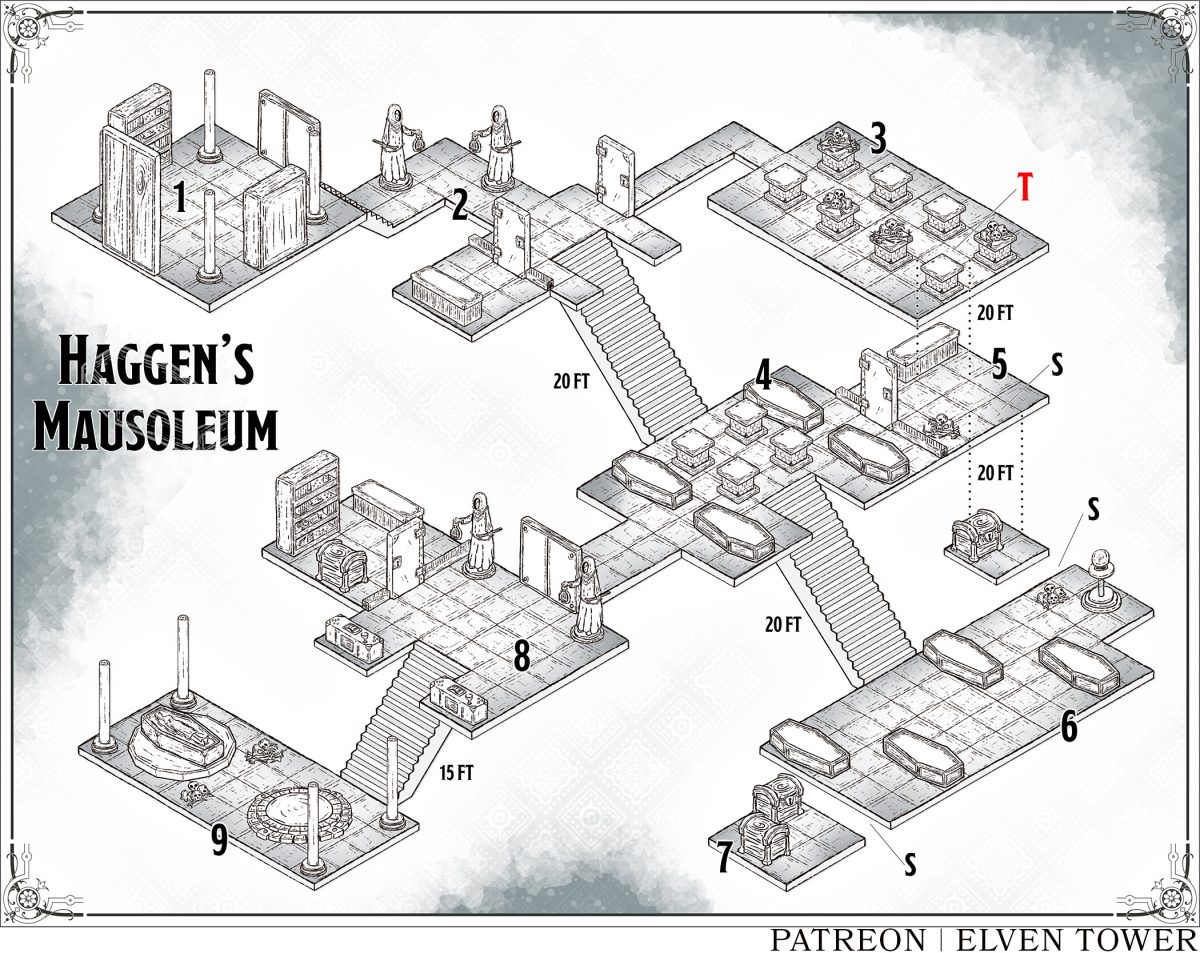 It is common for any individual to set goals. Some are short-termed quests like learning how to ride a horse. Others take years of effort, investment, and endless work. One cannot build an empire in a day. Alas, few people get to see their dreams come true. Very few in fact.

There is a name that all people in Vernal know. The city’s population admires and loves the Haggens. Their bloodline has a long history. Full of good deeds and exemplary individuals. Many of the Haggens hold high-ranked posts in powerful religious organizations.

One of them, Helga Haggen, became the Mother Superior of Vernal and lived her whole life practicing what she preached. She never feared getting her hands dirty.

Helga Haggen was a powerful, dutiful, and hard-working paladin of all that’s good and sacred. She accomplished many things and earned everything she had. However, her lifetime goal was something she never accomplished. “To retrieve the Holy Morningstar of Light, lost in the Underworld to the hands of foul demons from the dark abyss”. Everyone knew these words; she repeated them once and again until the last day of her life.

Helga marched three different times and fought the forces of evil followed by brave, strong men. Each time she chose to live rather than to suffer a heroic death. One day, age caught up to her. She accepted her fate.

She didn’t have a hero’s death, but she has the place of honor in the family’s mausoleum. All people in Vernal remember her for the strong woman and warrior she was.

Helga’s spirit won’t accept what happened. Her frustration and rage are such that she entered a state of denial. She won’t rest nor go peacefully until she sees her unfulfilled dream come true. However, the mixed feelings of frustration corrupted her, thus birthing an undead fallen paladin. Her powers have made all Haggens within the mausoleum rise from the dead as spirits, shadows, or cursed rabid ghouls. These restless spirits emerge from the mausoleum and attack innocents in a mindless rage.

The city of Vernal has been dealing with the dead coming out of the mausoleum for weeks. No matter how many times they beat them, they just keep coming out. The city and other Haggen family members offer 5,000 gp to any group of mercenaries who can assure no more abominations come out of the Haggen Mausoleum.

The following features correspond to all chambers inside Haggen Mausoleum; areas 1 through 9.

Light. There are torches on the walls; the statues in areas 2 and 8 feature oil lamps. Continual flame spells keep them burning. If removed, the magic ceases.

Restless Undead. Helga Haggen’s spirit fuels the anger and hatred of all the dead in the mausoleum. It is impossible to reason with any of them. All undead creatures within have advantage against turning effects.

The massive 20-feet-tall gate is made of exquisite varnished wood. A steel plate above it reads: “Here rest Helga Haggen and her loved ones”.

The gates to the mausoleum are unlocked. It is a feat of strength to push them open (DC 18 Strength). The dead within shut the doors when sunlight comes.

The stone container in the small chamber contains robes and gowns with the Haggen’s sigil. They are used in ceremonies when a member of the family is buried here.

Locks. A character with the right tools can pick the door locks in this area (DC 17 Thieves’ Tools).

The Haggens’ bones and ashes rest eternally on eight, engraved, stone niches. The walls display portraits of these people when they were alive.

Many of the Haggen rest here. Their spirits were corrupted by Helga’s uncontrollable frustration. Four shadows and four specters attack all living creatures.

Treasure. The characters retrieve 1,250 gp if they search the niches’ compartments (DC 16 Investigation).

Four sarcophagi and four niches flank the corridor which continues its descent to the lowest chamber.

Characters that fall from area 3 take 2d6 bludgeoning damage (DC 13 Dexterity for half). The door has no handle to turn or lock from this side. Enough force can break the door (DC 20 Athletics). A person’s bones and their ragged clothes lie scattered around the room.

Door. The best tools available are needed to open the lock of this door from the inside (DC 19 Thieves’ Tools).

Four engraved sarcophagi hug the walls. A crystal ball rests on a pedestal in a dark, damp alcove.

Four ghasts emerge from their enclosures when living creatures approach. They attack intruders until slain.

Treasure. The secret chamber in this area connects to area 5. Creatures who fall from there take 2d6 bludgeoning damage (DC 13 Dexterity for half). The wooden chest here contains 1,000 gp and a +1 longsword.

The two wooden chests in this secret chamber contain jewels and gold coins that belonged to the Haggens interred in this mausoleum. The lot is worth 5,000 gp.

The statues light the way to the altars before them. Logs and papers rest beside the burning incense.

Helga’s screams reach this area. She yells: “Show yourself and remove your filthy hands from our hoard”.

Door. A character can open the study in the mausoleum with the right tools (DC 17 Thieves’ Tools).

Treasure. The valuables in the study are expensive tomes, jewels, and coins. The lot is worth 2,000 gp.

A stone magic circle stands before the magnificent sarcophagi sculpted for Helga Haggen. A ghostly apparition of an armored lady floats above it.

Helga Haggen (wraith with maxed-out hit points) welcomes the characters with sarcasm. She yells at the characters with disdain. She claims she won’t stop the dead from coming out of the crypt until her life goal is fulfilled. Her current state makes it impossible. If Helga notices the characters have sacked the mausoleum, she summons allies and defends the place (see below).

Treasure. Helga’s sarcophagus contains all the things she was buried with. There are 3,000 gp, a +2 plate armor, a +1 shield, and a +1 ring of protection.

The characters promise to retrieve the Holy Morningstar for Helga. She gives them sixty days. They must leave something of value to prove her they shall return. She shall keep the dead at bay but only for two moons.

The characters cannot accept what Helga wants and decide to destroy her spirit to protect the city of Vernal. Helga wants to see her dream fulfilled one way or another. She fights with all her might along with four shadows and two specters. If defeated, the undead problem is solved. However, if the characters sacked the mausoleum, the Haggens shall hunt them, sooner or later. 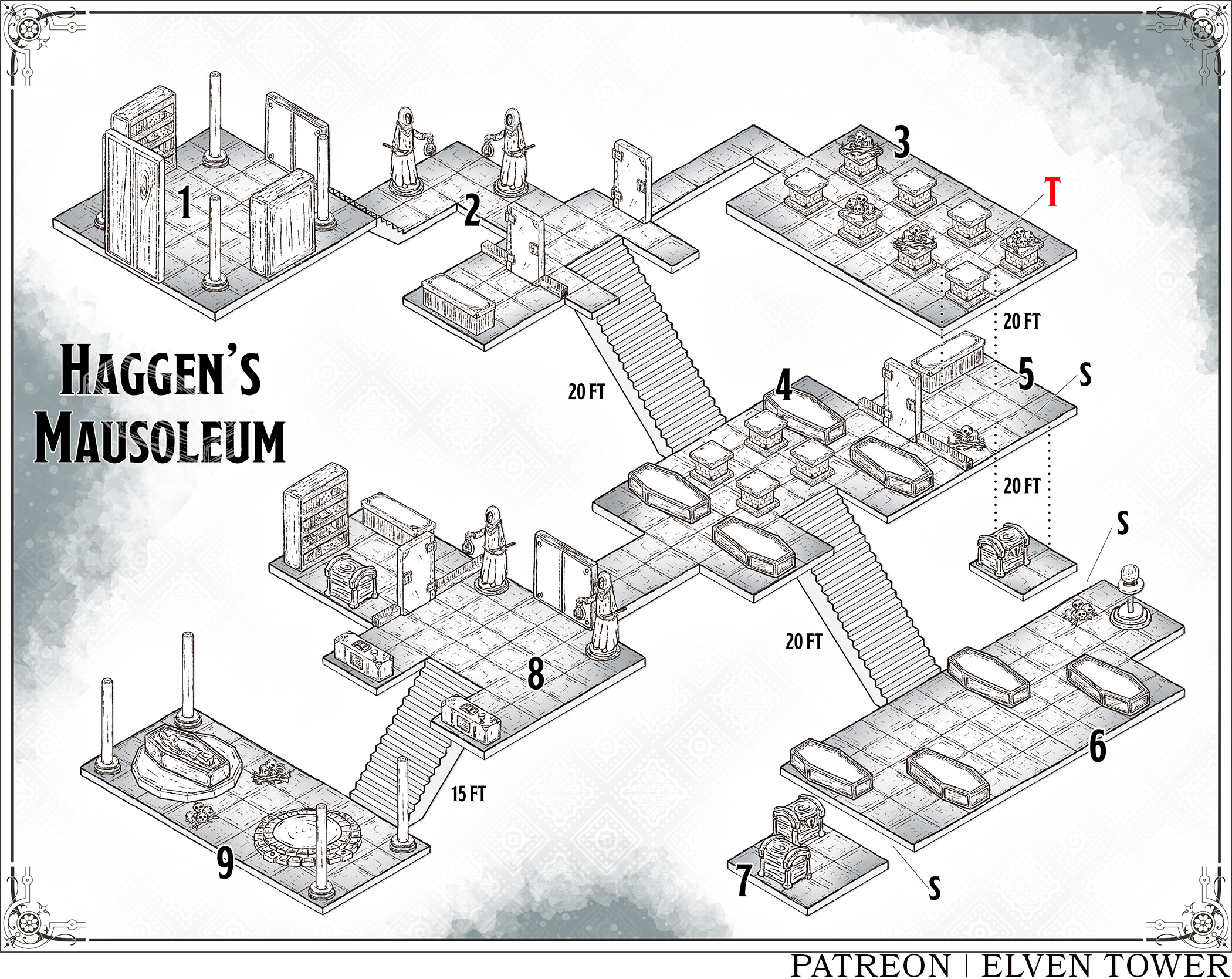