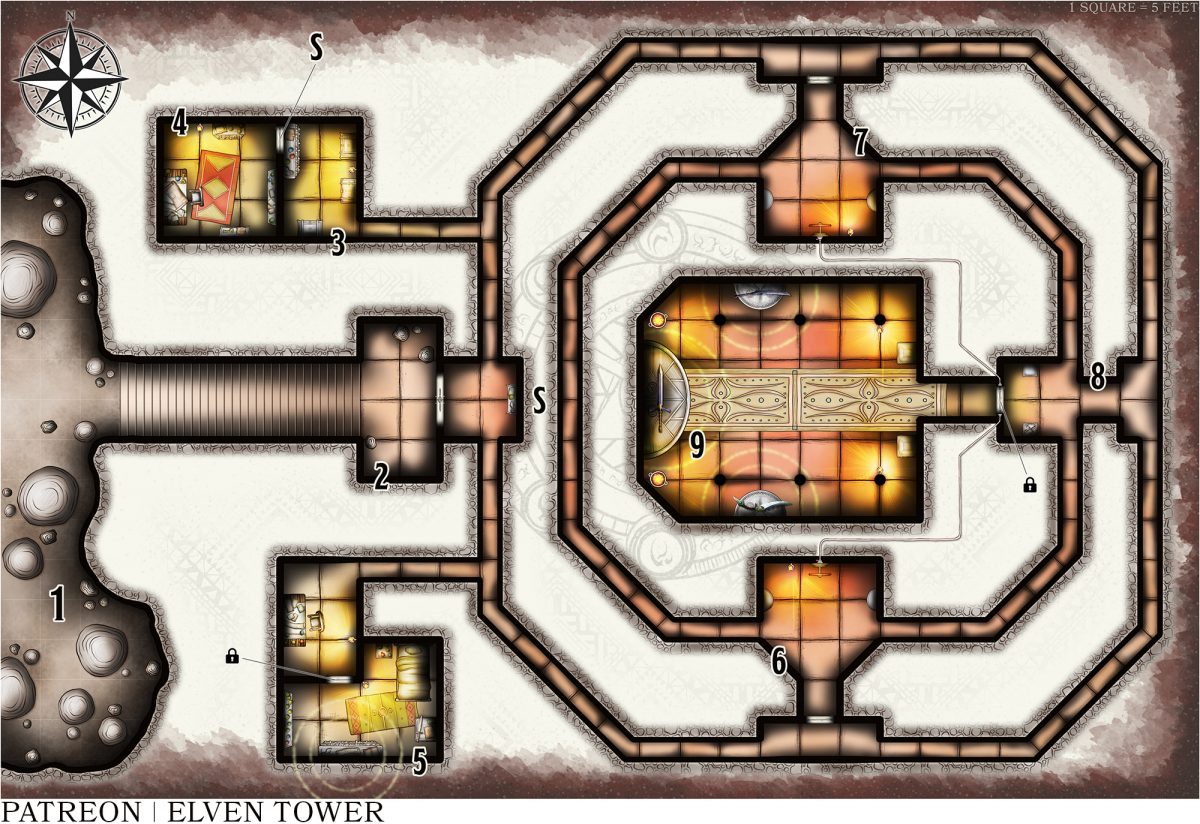 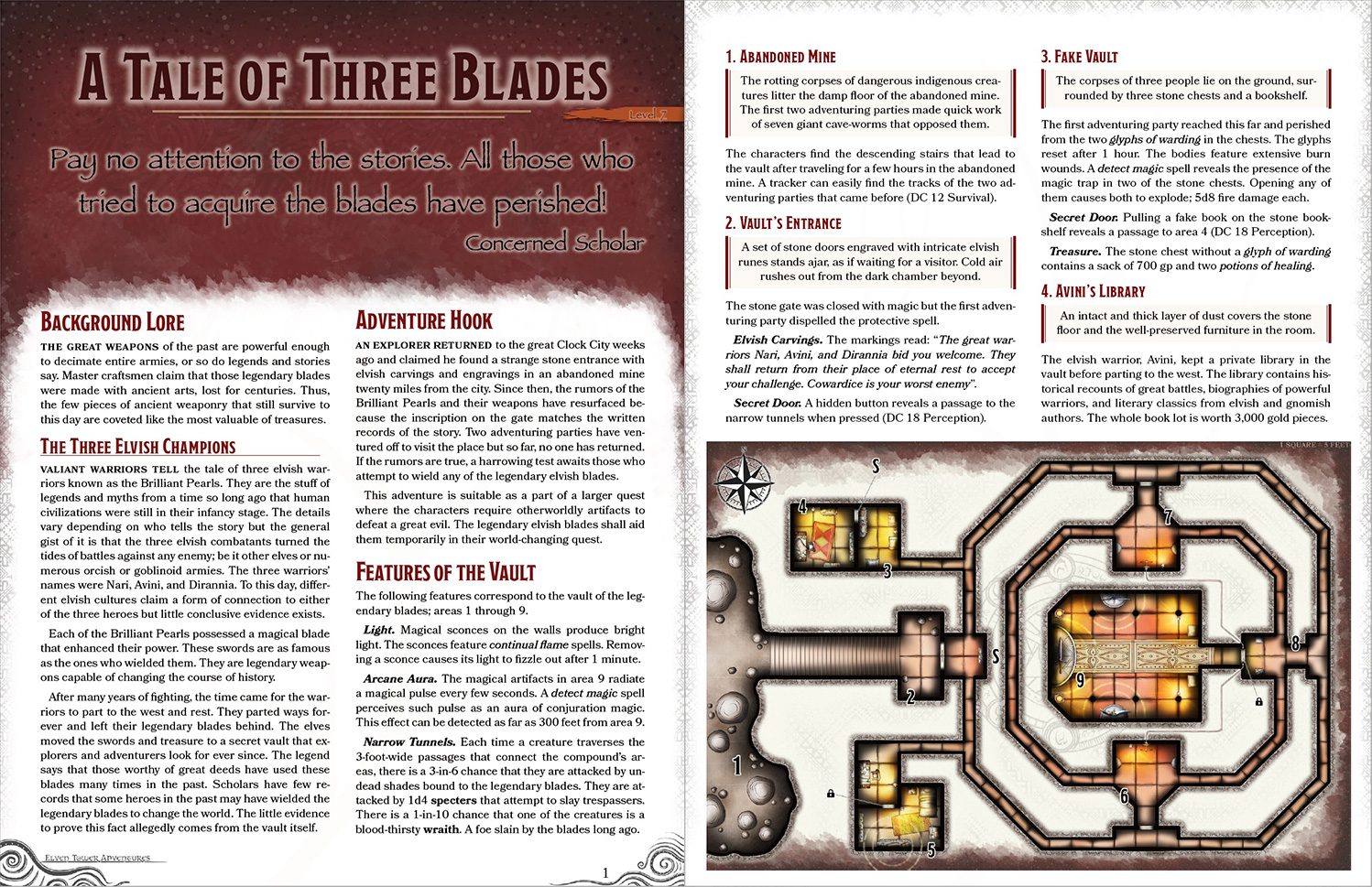 Pay no attention to the stories. All those who tried to acquire the blades have perished!

The great weapons of the past are powerful enough to decimate entire armies, or so do legends and stories say. Master craftsmen claim that those legendary blades were made with ancient arts, lost for centuries. Thus, the few pieces of ancient weaponry that still survive to this day are coveted like the most valuable of treasures.

Valiant warriors tell the tale of three elvish warriors known as the Brilliant Pearls. They are the stuff of legends and myths from a time so long ago that human civilizations were still in their infancy stage. The details vary depending on who tells the story but the general gist of it is that the three elvish combatants turned the tides of battles against any enemy; be it other elves or numerous orcish or goblinoid armies. The three warriors’ names were Nari, Avini, and Dirannia. To this day, different elvish cultures claim a form of connection to either of the three heroes but little conclusive evidence exists.

Each of the Brilliant Pearls possessed a magical blade that enhanced their power. These swords are as famous as the ones who wielded them. They are legendary weapons capable of changing the course of history.

After many years of fighting, the time came for the warriors to part to the west and rest. They parted ways forever and left their legendary blades behind. The elves moved the swords and treasure to a secret vault that explorers and adventurers look for ever since. The legend says that those worthy of great deeds have used these blades many times in the past. Scholars have few records that some heroes in the past may have wielded the legendary blades to change the world. The little evidence to prove this fact allegedly comes from the vault itself.

An explorer returned to the great Clock City weeks ago and claimed he found a strange stone entrance with elvish carvings and engravings in an abandoned mine twenty miles from the city. Since then, the rumors of the Brilliant Pearls and their weapons have resurfaced because the inscription on the gate matches the written records of the story. Two adventuring parties have ventured off to visit the place but so far, no one has returned. If the rumors are true, a harrowing test awaits those who attempt to wield any of the legendary elvish blades.

This adventure is suitable as a part of a larger quest where the characters require otherworldly artifacts to defeat a great evil. The legendary elvish blades shall aid them temporarily in their world-changing quest.

Features of the Vault

The following features correspond to the vault of the legendary blades; areas 1 through 9.

Light. Magical sconces on the walls produce bright light. The sconces feature continual flame spells. Removing a sconce causes its light to fizzle out after 1 minute.

Arcane Aura. The magical artifacts in area 9 radiate a magical pulse every few seconds. A detect magic spell perceives such pulse as an aura of conjuration magic. This effect can be detected as far as 300 feet from area 9.

Narrow Tunnels. Each time a creature traverses the 3-foot-wide passages that connect the compound’s areas, there is a 3-in-6 chance that they are attacked by undead shades bound to the legendary blades. They are attacked by 1d4 specters that attempt to slay trespassers. There is a 1-in-10 chance that one of the creatures is a blood-thirsty wraith. A foe slain by the blades long ago.

The rotting corpses of dangerous indigenous creatures litter the damp floor of the abandoned mine. The first two adventuring parties made quick work of seven giant cave-worms that opposed them.

The characters find the descending stairs that lead to the vault after traveling for a few hours in the abandoned mine. A tracker can easily find the tracks of the two adventuring parties that came before (DC 12 Survival).

A set of stone doors engraved with intricate elvish runes stands ajar, as if waiting for a visitor. Cold air rushes out from the dark chamber beyond.

The stone gate was closed with magic but the first adventuring party dispelled the protective spell.

Elvish Carvings. The markings read: “The great warriors Nari, Avini, and Dirannia bid you welcome. They shall return from their place of eternal rest to accept your challenge. Cowardice is your worst enemy”.

Secret Door. A hidden button reveals a passage to the narrow tunnels when pressed (DC 18 Perception).

The corpses of three people lie on the ground, surrounded by three stone chests and a bookshelf.

The first adventuring party reached this far and perished from the two glyphs of warding in the chests. The glyphs reset after 1 hour. The bodies feature extensive burn wounds. A detect magic spell reveals the presence of the magic trap in two of the stone chests. Opening any of them causes both to explode; 5d8 fire damage each.

Treasure. The stone chest without a glyph of warding contains a sack of 700 gp and two potions of healing.

An intact and thick layer of dust covers the stone floor and the well-preserved furniture in the room.

The elvish warrior, Avini, kept a private library in the vault before parting to the west. The library contains historical recounts of great battles, biographies of powerful warriors, and literary classics from elvish and gnomish authors. The whole book lot is worth 3,000 gold pieces.

5. Annals of the Three Blades

A lonely wooden desk awaits next to a closed stone door. A quill and parchment float in the presence of visitors and begin to register names in fine script.

An invisible servant with mind-reading qualities reacts to the characters’ presence and writes their names and ages in the visitors’ log on the desk. The servant instantly knows this information unless a character is protected by a mind blank spell or similar magic. Alternatively, a quick spellcaster may use dispel magic to interrupt the servant and make it go away for 24 hours.

The door to the library opens automatically after all names are recorded by the invisible servant. Otherwise, a locksmith can disable the lock (DC 18 Thieves’ Tools).

The small library is kept by two invisible servants that record all information and events related to the three blades. They use a crystal ball on the bookshelf to find out how the blades are used. The library contains accurate reports of the Brilliant Pearls’ deeds and the people who wielded the blades after them. So far, there have been thirteen instances in history of people using the blades to change the world, the latest occurred 322 years ago. It is revealed that after the blades are used to change the world in some way or the other, their wielders perish, the blades vanish, and return to the vault.

Operating the valve in this chamber is required to open the door to area 9. The room is guarded by two loyal shades (wraiths) who fight until slain. After being destroyed, these restless spirits reform after 10 days.

Operating the valve in this chamber is required to open the door to area 9. The room is guarded by three loyal shades (specters) who fight until slain. After being destroyed, these restless spirits reform after 10 days.

Dirannia’s Warning. After operating the wheel valve, the ghostly apparition of the elvish warrior of yore, Dirannia, appears before the characters. The friendly spirit warns the characters against opening the vault. It claims that most who attempt it perish and become shades bound to guard the vault. However, Dirannia says that when the characters encounter her again, she is bound by her duty to fight them with all her power.

The dried-up corpses of four individuals lie on the floor in front of a large stone door with elvish scripts and intricately carved mithral inlays.

The stone door features a glyph of warding (blight) spell as a trap. The second adventuring party reached this chamber and failed to identify the trap. They suffered a slow death. Operating both wheel valves in areas 6 and 7 opens the door. Forcing the door open without operating the valves first causes all creatures within 20 feet to be targeted by a level 6 blight spell. They take 10d8 necrotic damage (DC 16 Constitution save for half).

9. The Trial of Blades

The legendary blades rest on stone pedestals in the bright and lavish chamber. Their arcane waves produce pulses that are visible even to the naked eye.

The ghostly apparitions of the three elvish warriors, the Brilliant Pearls, coalesce by their blades. Nari, Avini, and Dirannia manifest in ethereal but regal attire. They look sternly at those who have come to challenge them.

Each of the warriors bows as a sign of respect before reaching for their legendary blade and lunging to attack. The elvish warriors use the wight statblock with maxed-out hit points. In addition, each of the warriors has access to their blade’s legendary abilities (see below). They do not have to pay the cost for those abilities if it is required. The Brilliant Pearls fight until slain. Should the characters retreat mid-fight, the elvish warriors curse them for their cowardice but do not pursue them. However, retreating from this fight causes the legendary blades to vanish temporarily. Cowards are not worthy of wielding the legendary blades, they shall never have access to them during their lifetimes.

Corrosive Swamp Edge is a +2 scimitar. A creature attuned to it can use an action to sacrifice a third of their hit points to invoke the noxious decay from the swamps. The blade becomes coated in a poison that deals an extra 10d6 poison damage on the next successful attack.

Air from the Tall Mountain

Air from the Tall Mountain is a +2 longsword. A creature attuned to it can sacrifice their own life force to heal 10d6 hit points, heal a creature from any disease, ailment, regenerate a body part, and extend the target’s lifespan by 10 years beyond their natural point of natural death. Each time this is done, the attuned creature loses 2 Constitution points. The creature attuned to the blade turns to fine gray dust after doing this five times.

Mithral of the Dark Abyss

Mithral of the Dark Abyss is a +2 greatsword. A creature attuned to it can sacrifice half their hit points to coat the blade in necrotic energy and deal an extra 4d6 damage per attack for 10 minutes. These hit points cannot be regained for a period of 1d4 hours.

The Ascendancy of the worthy

The characters prove themselves in battle and defeat the undying manifestations of Nari, Avini, and Dirannia. After the battle, Nari reappears, bows as a sign of respect, and thanks the characters for the formidable fight.

Nari’s spirit explains that the characters are free to wield the blades and perform great deeds with them. Their actions shall inevitably be recorded in the Annals of the Three Blades for posterity. Nari says that using the legendary swords for evil is frowned upon and shall bring woe upon those who disrespect the relic blades.

Creatures who perish during the Trial of the Blades have their souls bound in service to guard the vault for eternity. Nothing short of a wish spell can break this bond. Such a creature, if revived, cannot ever wield any of the blades as they have been deemed unworthy.

Creatures who retreat from the Trial of the Blades are deemed unworthy of ever wielding them. The swords vanish from existence for 10 years. The cowards cannot recover their honor in the eyes of the Brilliant Pearls. 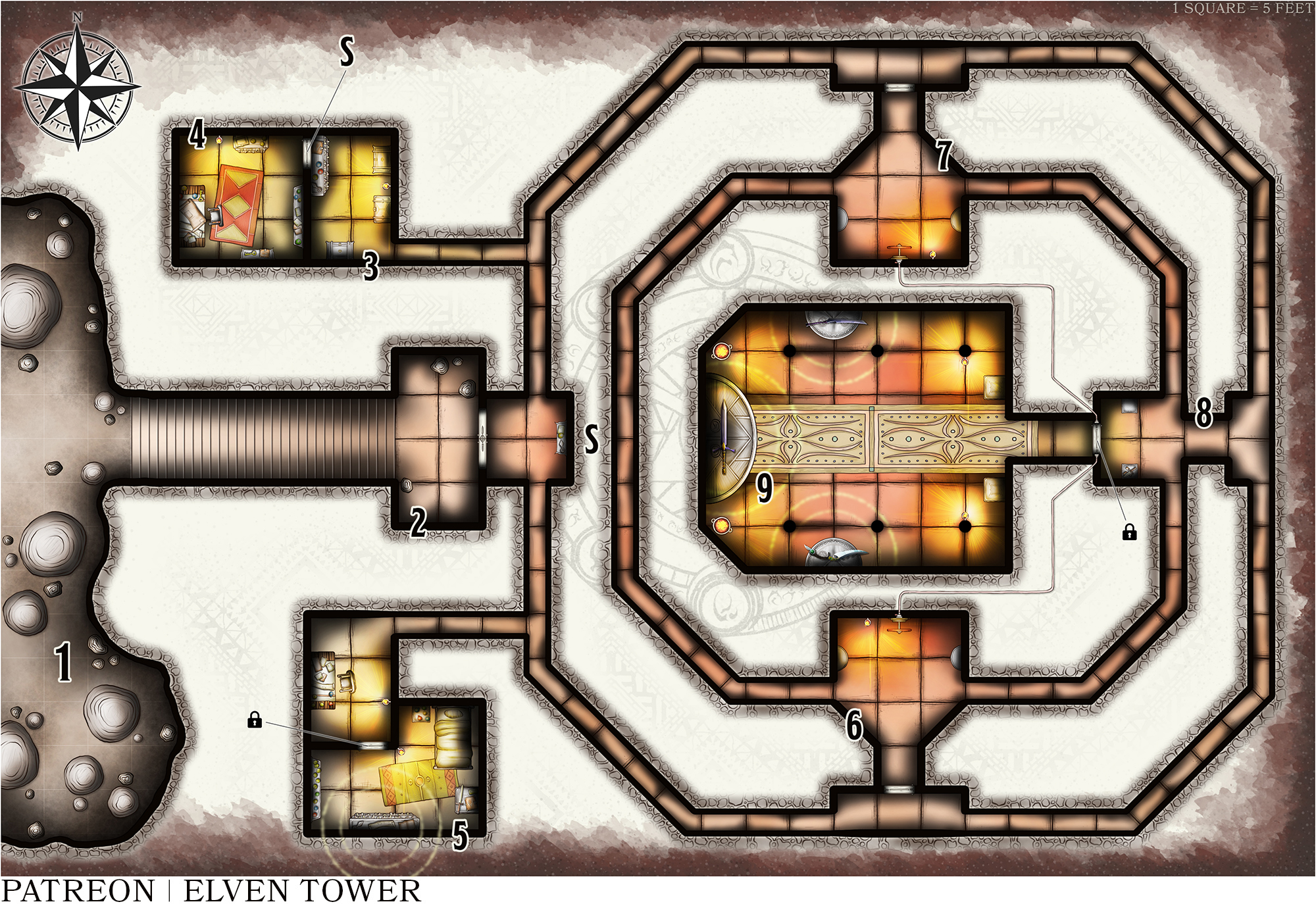