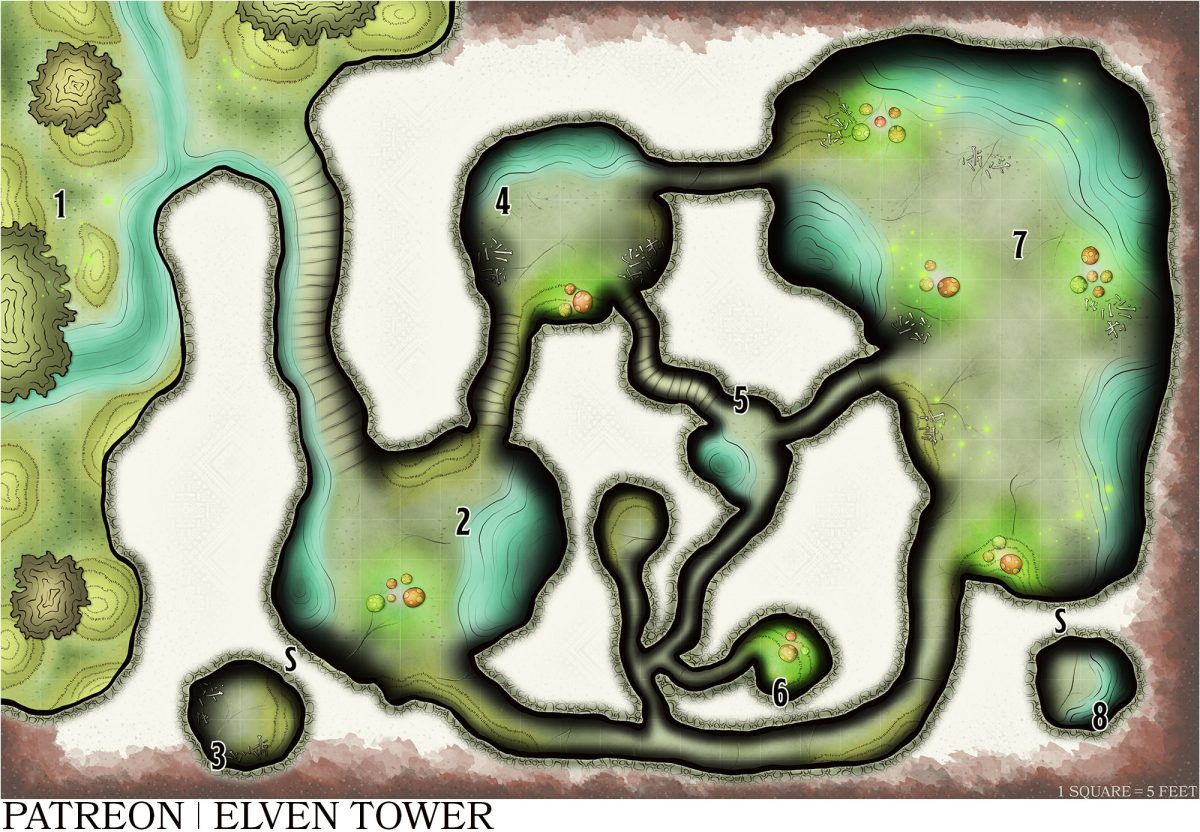 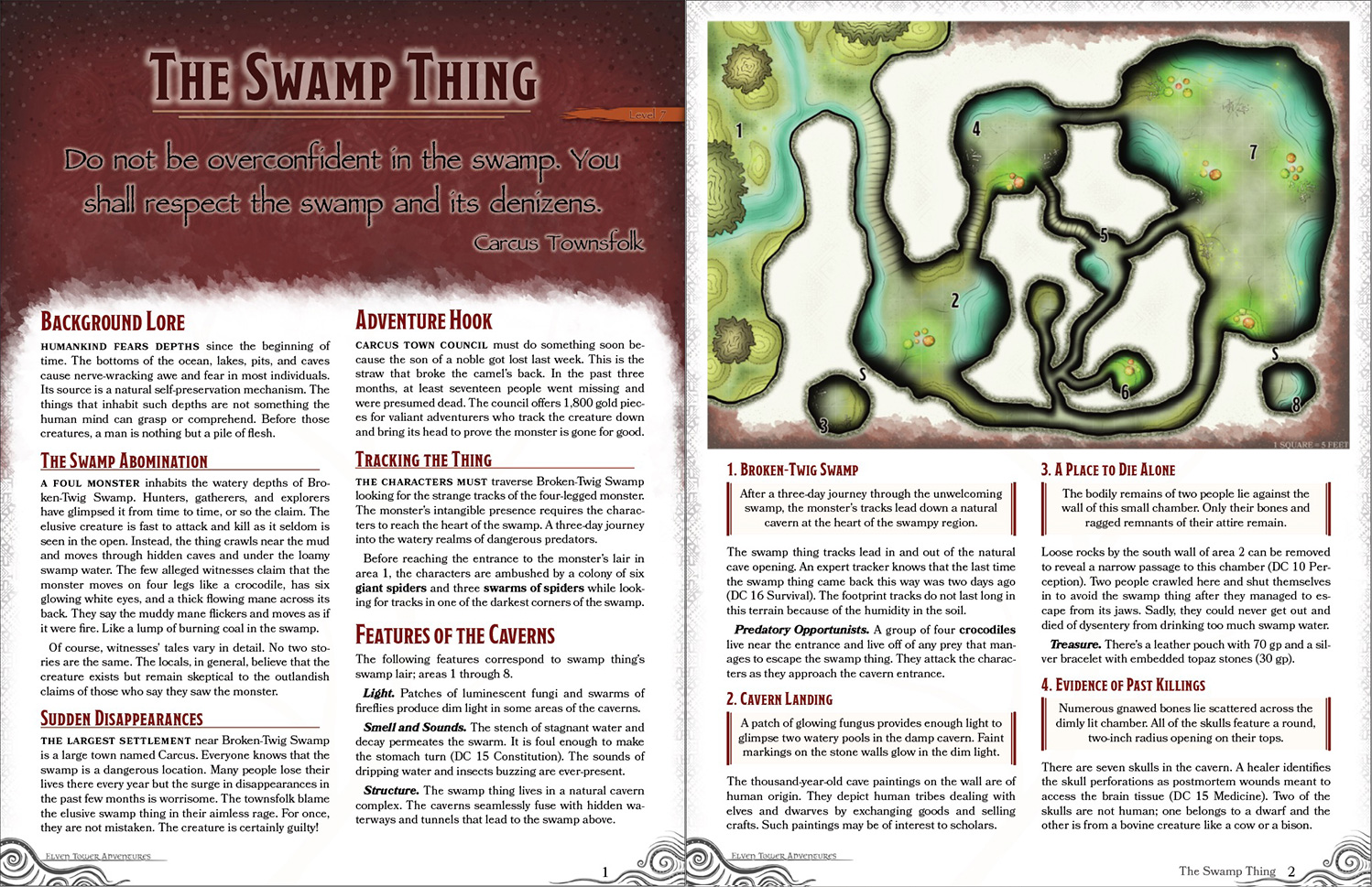 Do not be overconfident in the swamp. You shall respect the swamp and its denizens.

Humankind fears depths since the beginning of time. The bottoms of the ocean, lakes, pits, and caves cause nerve-wracking awe and fear in most individuals. Its source is a natural self-preservation mechanism. The things that inhabit such depths are not something the human mind can grasp or comprehend. Before those creatures, a man is nothing but a pile of flesh.

A foul monster inhabits the watery depths of Broken-Twig Swamp. Hunters, gatherers, and explorers have glimpsed it from time to time, or so the claim. The elusive creature is fast to attack and kill as it seldom is seen in the open. Instead, the thing crawls near the mud and moves through hidden caves and under the loamy swamp water. The few alleged witnesses claim that the monster moves on four legs like a crocodile, has six glowing white eyes, and a thick flowing mane across its back. They say the muddy mane flickers and moves as if it were fire. Like a lump of burning coal in the swamp.

Of course, witnesses’ tales vary in detail. No two stories are the same. The locals, in general, believe that the creature exists but remain skeptical to the outlandish claims of those who say they saw the monster.

The largest settlement near Broken-Twig Swamp is a large town named Carcus. Everyone knows that the swamp is a dangerous location. Many people lose their lives there every year but the surge in disappearances in the past few months is worrisome. The townsfolk blame the elusive swamp thing in their aimless rage. For once, they are not mistaken. The creature is certainly guilty!

Carcus Town council must do something soon because the son of a noble got lost last week. This is the straw that broke the camel’s back. In the past three months, at least seventeen people went missing and were presumed dead. The council offers 1,800 gold pieces for valiant adventurers who track the creature down and bring its head to prove the monster is gone for good.

The characters must traverse Broken-Twig Swamp looking for the strange tracks of the four-legged monster. The monster’s intangible presence requires the characters to reach the heart of the swamp. A three-day journey into the watery realms of dangerous predators.

Before reaching the entrance to the monster’s lair in area 1, the characters are ambushed by a colony of six giant spiders and three swarms of spiders while looking for tracks in one of the darkest corners of the swamp.

Light. Patches of luminescent fungi and swarms of fireflies produce dim light in some areas of the caverns.

Smell and Sounds. The stench of stagnant water and decay permeates the swarm. It is foul enough to make the stomach turn (DC 15 Constitution). The sounds of dripping water and insects buzzing are ever-present.

Structure. The swamp thing lives in a natural cavern complex. The caverns seamlessly fuse with hidden waterways and tunnels that lead to the swamp above.

After a three-day journey through the unwelcoming swamp, the monster’s tracks lead down a natural cavern at the heart of the swampy region.

The swamp thing tracks lead in and out of the natural cave opening. An expert tracker knows that the last time the swamp thing came back this way was two days ago (DC 16 Survival). The footprint tracks do not last long in this terrain because of the humidity in the soil.

Predatory Opportunists. A group of four crocodiles live near the entrance and live off of any prey that manages to escape the swamp thing. They attack the characters as they approach the cavern entrance.

A patch of glowing fungus provides enough light to glimpse two watery pools in the damp cavern. Faint markings on the stone walls glow in the dim light.

The thousand-year-old cave paintings on the wall are of human origin. They depict human tribes dealing with elves and dwarves by exchanging goods and selling crafts. Such paintings may be of interest to scholars.

The bodily remains of two people lie against the wall of this small chamber. Only their bones and ragged remnants of their attire remain.

Loose rocks by the south wall of area 2 can be removed to reveal a narrow passage to this chamber (DC 10 Perception). Two people crawled here and shut themselves in to avoid the swamp thing after they managed to escape from its jaws. Sadly, they could never get out and died of dysentery from drinking too much swamp water.

Treasure. There’s a leather pouch with 70 gp and a silver bracelet with embedded topaz stones (30 gp).

4. Evidence of Past Killings

Numerous gnawed bones lie scattered across the dimly lit chamber. All of the skulls feature a round, two-inch radius opening on their tops.

There are seven skulls in the cavern. A healer identifies the skull perforations as postmortem wounds meant to access the brain tissue (DC 15 Medicine). Two of the skulls are not human; one belongs to a dwarf and the other is from a bovine creature like a cow or a bison.

A variety of flesh-eating fireflies inhabits this narrow chamber. Their natural luminescence is only used when mating and when on the hunt for new prey.

Flesh-Eating Bugs. Three swarms of insects attack any creatures that come through here. Their bite causes blindness for 1d4 rounds (DC 14 Constitution save).

The fungi have a somniferous property in their free-floating spores. Creatures who breathe the spores fall asleep for 4 hours (DC 15 Constitution save). The insect swarms in area 5 come and attack unconscious creatures 1d6 rounds later. A nature-inclined individual identifies the species from afar (DC 16 Nature).

The largest chamber contains several fungi patches, shallow ponds, and numerous glowing bugs. The northern pond of stagnant water vibrates as a dark entity emerges from it, shrouded in darkness.

This is the swamp thing’s lair. This unique monster is part abomination, part plant, part demon (see image below). It brings its prey’s bodies to the lair and uses its jaws to puncture the skull and imbibe the brain tissue.

The swamp thing (hezrou) is a demonic creature of territorial nature that shall not suffer trespassers so close to its repugnant pond. It fights fiercely along with four swarms of insects that come to its aid. If dropped to a third of its hit points, the swamp things attempt to escape through its pond. If it succeeds, tracking it through the waterways is a difficult task (see Development).

A slim whimpering figure hides near the dark corner of this chamber. The poor boy has a leg missing.

The young noble boy whose disappearance motivated the authorities in Carcus Town to finally do something managed to survive this far on his own. The teenager is in severe shock after the swamp thing tore his leg apart and he escaped into this narrow cavern where the monster could not reach him. The boy is exhausted and famished. He needs immediate medical attention.

If the characters slay the cursed monster and return to Carcus Town with its head as a trophy. They are given a hero’s welcome and receive the 1,800 gp reward. The noble boy’s family adds 600 gp for the return of their kin, despite the boy’s deplorable physical state.

Scholars become interested in the cave paintings in the swamp caves. They hire the adventurers to escort them there to analyze the evidence of long-lost peoples.

If the swamp thing manages to escape certain death in the caves. It hides in underground streams to lick its wounds. It survives for weeks on smaller prey from the swamp indigenous creatures. It also finds and kills the noble boy in area 8 while foraging close to the lair.

The thing bides its time and remembers the characters’ faces. Contrary to common hearsay, it is far more intelligent than people think. It shall take revenge! 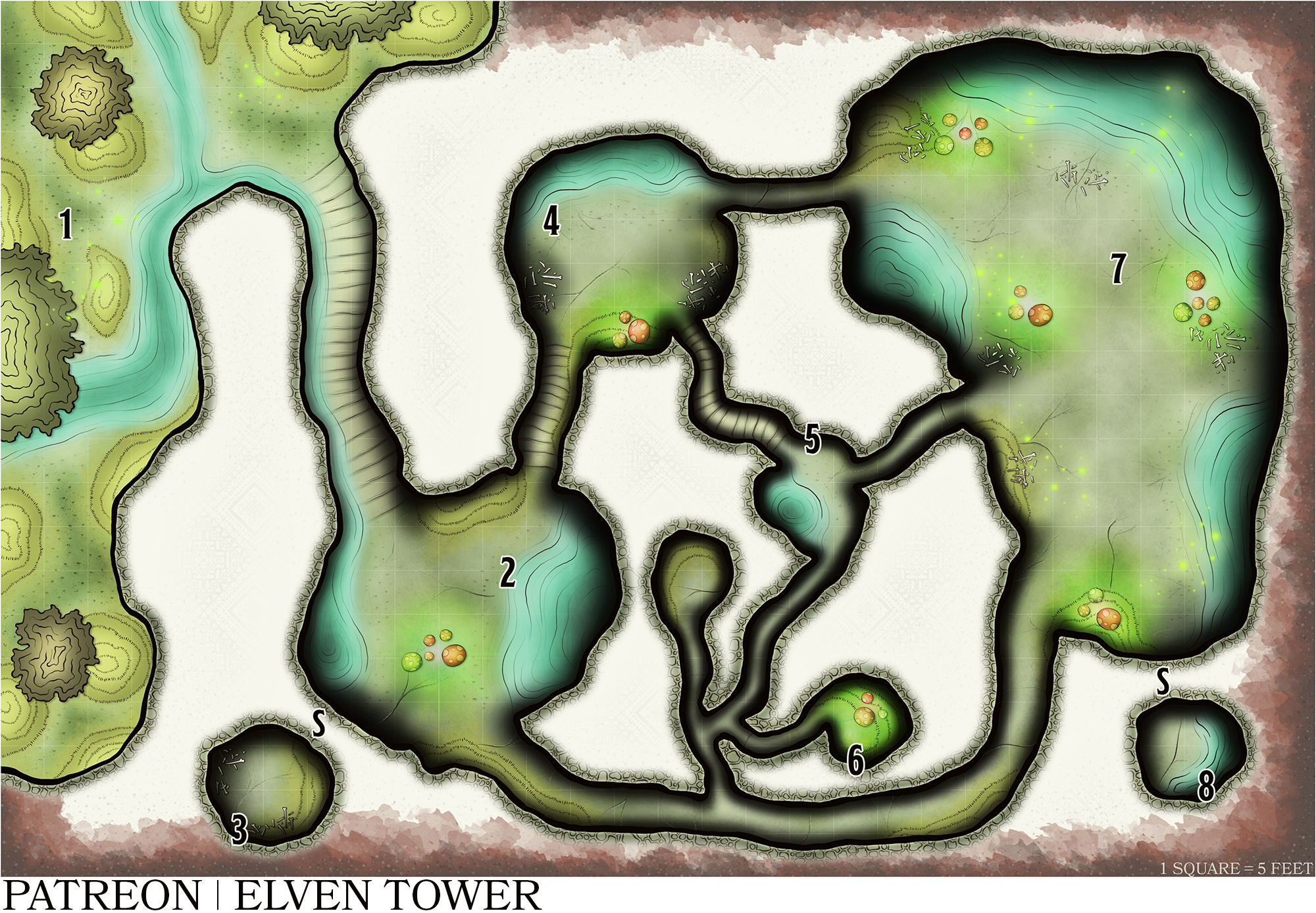