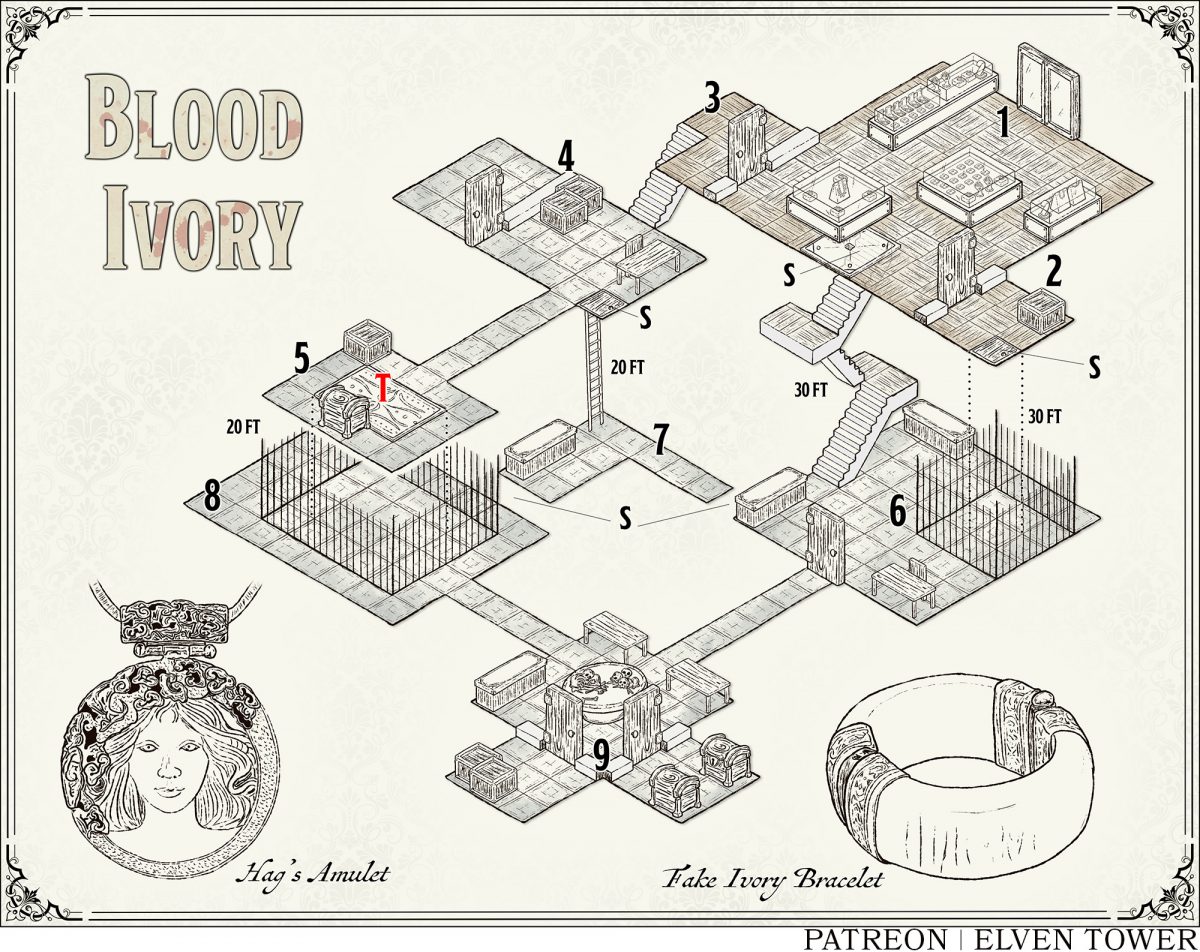 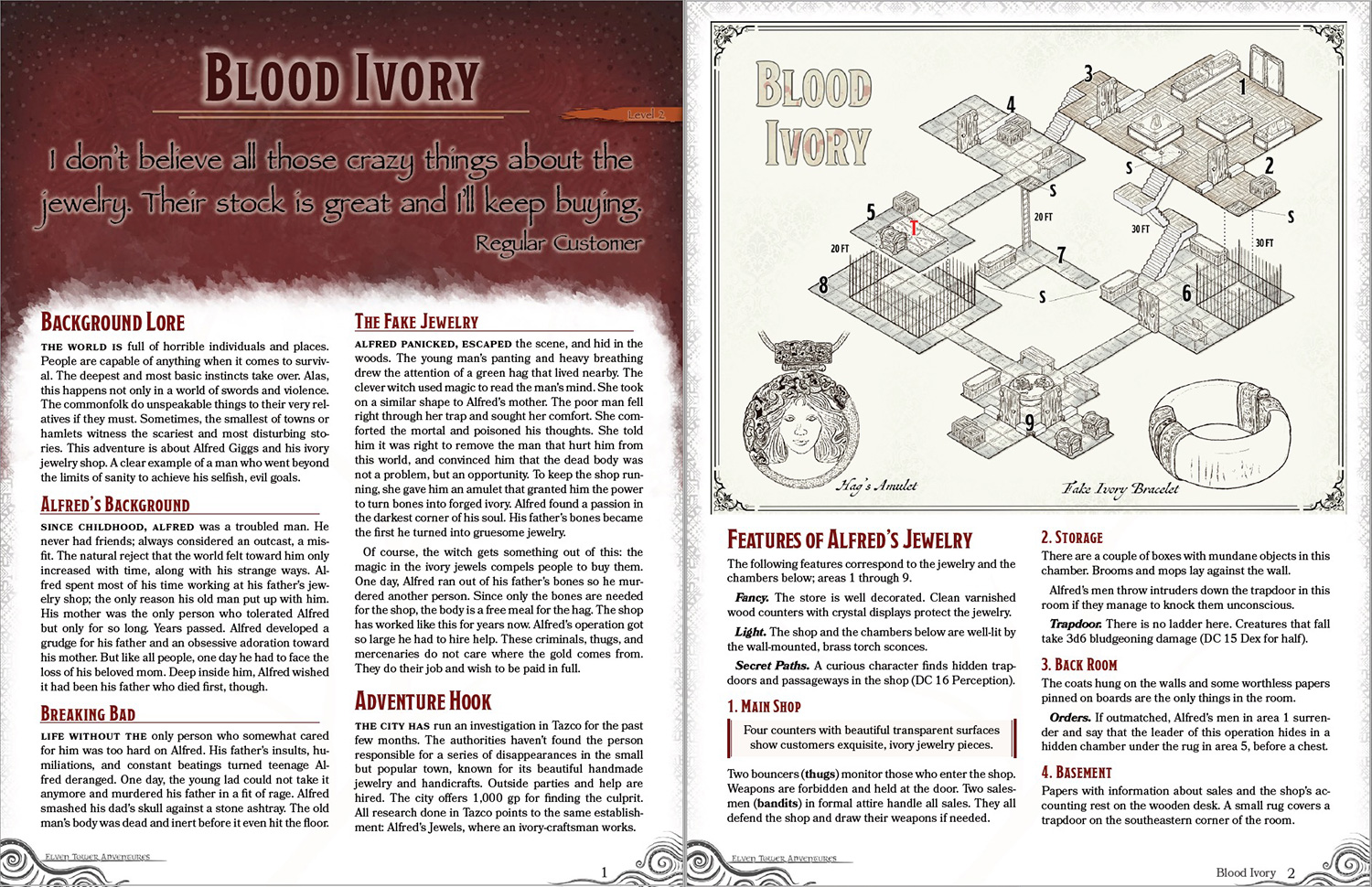 I don’t believe all those crazy things about the jewelry. Their stock is great and I’ll keep buying.

The world is full of horrible individuals and places. People are capable of anything when it comes to survival. The deepest and most basic instincts take over. Alas, this happens not only in a world of swords and violence. The commonfolk do unspeakable things to their very relatives if they must. Sometimes, the smallest of towns or hamlets witness the scariest and most disturbing stories. This adventure is about Alfred Giggs and his ivory jewelry shop. A clear example of a man who went beyond the limits of sanity to achieve his selfish, evil goals.

Since childhood, Alfred was a troubled man. He never had friends; always considered an outcast, a misfit. The natural reject that the world felt toward him only increased with time, along with his strange ways. Alfred spent most of his time working at his father’s jewelry shop; the only reason his old man put up with him. His mother was the only person who tolerated Alfred but only for so long. Years passed. Alfred developed a grudge for his father and an obsessive adoration toward his mother. But like all people, one day he had to face the loss of his beloved mom. Deep inside him, Alfred wished it had been his father who died first, though.

Life without the only person who somewhat cared for him was too hard on Alfred. His father’s insults, humiliations, and constant beatings turned teenage Alfred deranged. One day, the young lad could not take it anymore and murdered his father in a fit of rage. Alfred smashed his dad’s skull against a stone ashtray. The old man’s body was dead and inert before it even hit the floor.

Alfred panicked, escaped the scene, and hid in the woods. The young man’s panting and heavy breathing drew the attention of a green hag that lived nearby. The clever witch used magic to read the man’s mind. She took on a similar shape to Alfred’s mother. The poor man fell right through her trap and sought her comfort. She comforted the mortal and poisoned his thoughts. She told him it was right to remove the man that hurt him from this world, and convinced him that the dead body was not a problem, but an opportunity. To keep the shop running, she gave him an amulet that granted him the power to turn bones into forged ivory. Alfred found a passion in the darkest corner of his soul. His father’s bones became the first he turned into gruesome jewelry.

Of course, the witch gets something out of this: the magic in the ivory jewels compels people to buy them. One day, Alfred ran out of his father’s bones so he murdered another person. Since only the bones are needed for the shop, the body is a free meal for the hag. The shop has worked like this for years now. Alfred’s operation got so large he had to hire help. These criminals, thugs, and mercenaries do not care where the gold comes from. They do their job and wish to be paid in full.

The city has run an investigation in Tazco for the past few months. The authorities haven’t found the person responsible for a series of disappearances in the small but popular town, known for its beautiful handmade jewelry and handicrafts. Outside parties and help are hired. The city offers 1,000 gp for finding the culprit. All research done in Tazco points to the same establishment: Alfred’s Jewels, where an ivory-craftsman works.

The following features correspond to the jewelry and the chambers below; areas 1 through 9.

Light. The shop and the chambers below are well-lit by the wall-mounted, brass torch sconces.

Two bouncers (thugs) monitor those who enter the shop. Weapons are forbidden and held at the door. Two salesmen (bandits) in formal attire handle all sales. They all defend the shop and draw their weapons if needed.

There are a couple of boxes with mundane objects in this chamber. Brooms and mops lay against the wall.

Alfred’s men throw intruders down the trapdoor in this room if they manage to knock them unconscious.

Trapdoor. There is no ladder here. Creatures that fall take 3d6 bludgeoning damage (DC 15 Dex for half).

The coats hung on the walls and some worthless papers pinned on boards are the only things in the room.

Orders. If outmatched, Alfred’s men in area 1 surrender and say that the leader of this operation hides in a hidden chamber under the rug in area 5, before a chest.

Papers with information about sales and the shop’s accounting rest on the wooden desk. A small rug covers a trapdoor on the southeastern corner of the room.

A varnished wooden chest with silver inlays stands by the south wall. The red velvet rug mesmerizes with its golden patterns. Several high-quality paintings of fantastic landscapes decorate the walls of the room.

Trap. The paintings on the walls and the promising looks of the chest and rug have the objective of drawing the attention from the pressure-sensitive plates by the room’s center. When two or more creatures step on the rug, the floor gives in and they fall to the cell in area 8, taking 2d6 bludgeoning damage (DC 14 Dex for half).

The yelps and sobs of a woman and a small child come from within the cell in this cold chamber.

Two large stone containers and a wooden desk with mundane papers are the only things in the room. There are two guards (thugs) taking care of this area.

Prisoners. A woman named Marla and her six-year-old daughter Laura were imprisoned two days ago. Their silk dresses are torn and dirty. They are too afraid to talk.

Treasure. There is jewelry stored in the stone containers. Most of it was made with the bones of innocent people. There are regular silver pieces among the fake ivory stuff (DC 14 Investigation). The lot is worth 250 gp.

This secret chamber connects areas 4 through a ladder, and areas 6 and 7 through hidden passageways.

Treasure. The container is packed with linens, worthless fabrics, and mundane objects. A leather bag with 300 gp is buried at the bottom of almost a hundred pounds of curtains and sheets (DC 14 Investigation).

A large cell dominates this large chamber. The stained walls are repleted with spiders webs and dirt. Nothing accompanies the rusty iron bars.

This chamber is the shop’s defense mechanism against intruders. If the characters believe what Alfred’s men say and fall down the trap in area 5, the shop owner and the rest of his goons meet them here (see below).

Prisoners. Alfred (commoner) attempts to intimidate the imprisoned characters and orders them to leave the shop and never return. Four of his goons (bandits) support their boss and point crossbows at the people behind bars. The characters may either surrender and live to see another day or fight their way out (see Development).

Two piles of human bones rest over a circular steel table. Several pieces and fragments of silver and gold lay scattered around them. Unfinished rings and bracelets for the next fake ivory collection…

Alfred and his goons mentioned in area 8 work here. If the characters do not fall for the trap in area 5, they here. He doesn’t fight to the death (see Development).

Treasure. One of the side rooms has two chests that contain 1,000 gp and three potions of healing.

If the trap to imprison the characters fails, Alfred fights but he pleads for his life at the last moment. He tells the characters they can keep the jewels and the gold as long as they spare him and let him leave. If that is not enough, Alfred tells the truth about the bodies and what they did with them. He says everything about the forest witch and hands over the hag’s amulet. A detect magic spell confirms the amulet’s and the jewelry’s magic.

The characters get paid the 1,000 gp reward even if Alfred dies during combat. The bones and fake pieces in area 9 question the veracity of everything in the store. The city confiscates it all and offers the characters the job of finding the bodies. The amulet’s befoul origin (DC 16 Arcana) is their first clue. Nevertheless, dealing with the forest hag shall be an adventure for another day… 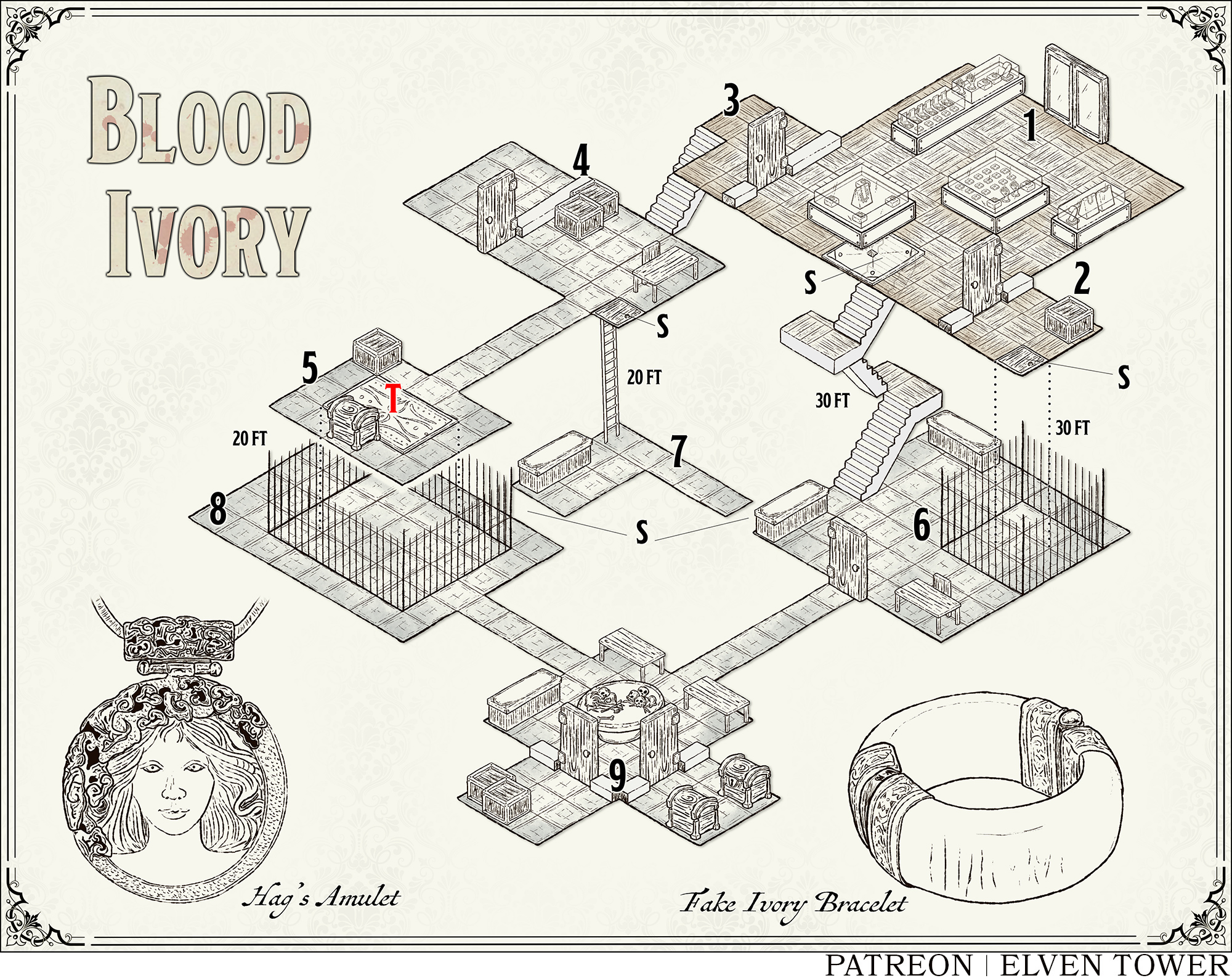