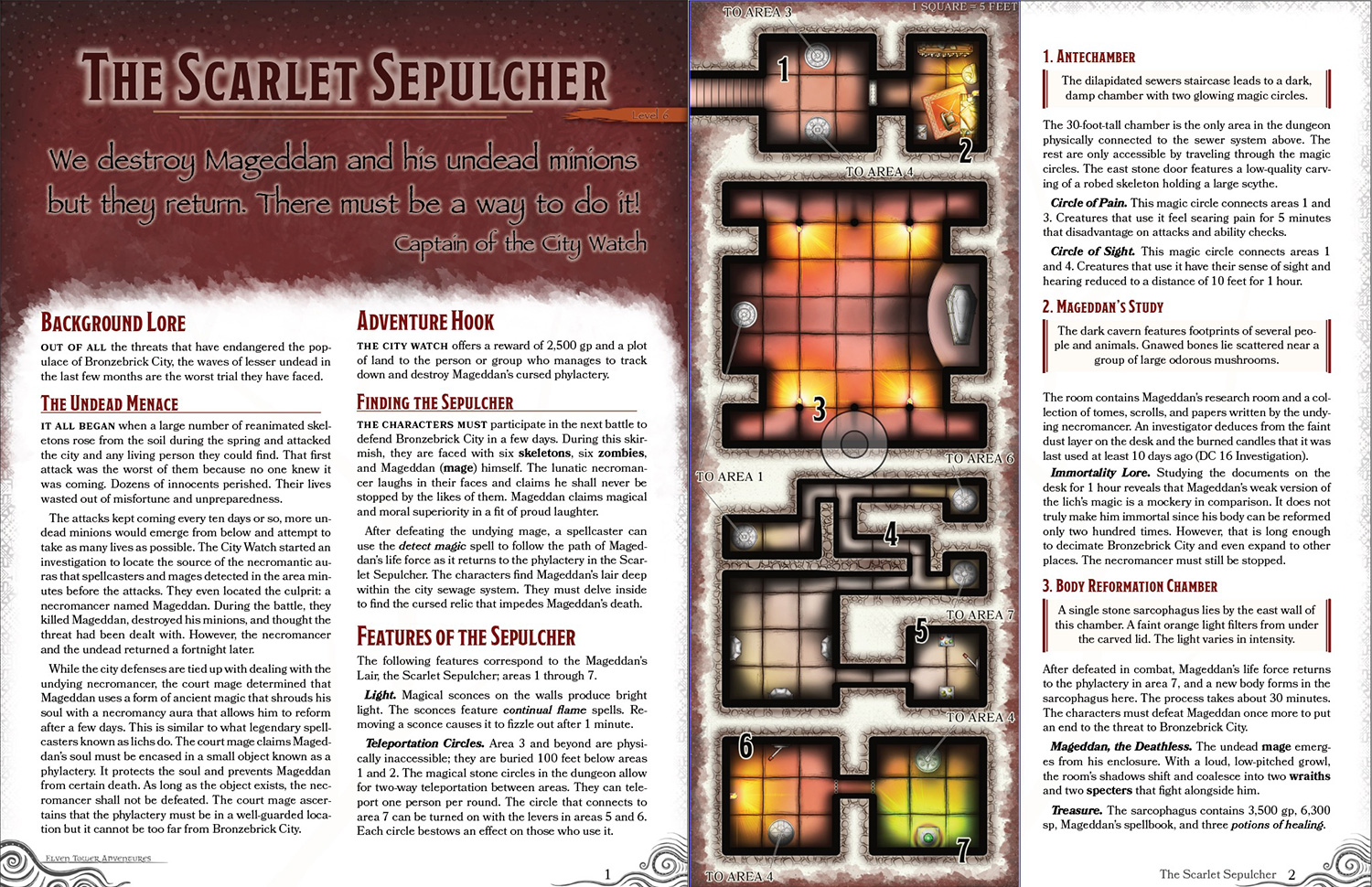 Mageddan and his undead minions return again and again. We must destroy them for good!

Captain of the City Watch

Large settlements must overcome great challenges throughout their long histories if they are to thrive. Out of all the threats that have endangered the populace of Bronzebrick City, the waves of lesser undead in the last few months are the worst trial they have faced.

It all began when a large number of reanimated skeletons rose from the soil during the spring and attacked the city and any living person they could find. That first attack was the worst of them because it took everyone off-guard. Dozens of innocents perished. Their lives wasted out of misfortune and unpreparedness.

The attacks kept coming every ten days or so; undead minions emerged from below and attempted to take as many lives as possible. Bronzebrick City Watch started an investigation. Their mages detected necromantic auras minutes before the attacks. With this information, they located the culprit: a necromancer named Mageddan. The soldiers killed Mageddan and destroyed his minions. The threat had been dealt with. Alas, Mageddan and the undead returned a fortnight later.

The City Watch offers a reward of 2,500 gp and a plot of land to the person or group who manages to track down and destroy Mageddan’s cursed phylactery.

The characters must participate in the next battle to defend Bronzebrick City in a few days. During this skirmish, they are faced with six skeletons, six zombies, and Mageddan (mage). The lunatic necromancer laughs in their faces and claims he shall never be stopped by the likes of them. Mageddan claims magical and moral superiority in a fit of proud hysterics.

After defeating the undying mage, a spellcaster can use a detect magic spell to follow the path of Mageddan’s life force as it returns to the phylactery in the Scarlet Sepulcher. The characters find Mageddan’s lair deep within the city sewage system. They used to be the foundation of a settlement that existed long before Bronzebrick City.

Features of the Sepulcher

The following features correspond to the Mageddan’s Lair, the Scarlet Sepulcher; areas 1 through 7.

Light. Magical sconces on the walls produce bright light. The sconces feature continual flame spells. Removing a sconce causes it to fizzle out after 1 minute.

Teleportation Circles. Areas 3 and beyond are physically inaccessible; they are buried 100 feet below areas 1 and 2. The magical stone circles in the dungeon allow for two-way teleportation between areas. They can teleport one person per round. The circle that connects to area 7 can be turned on with the levers in areas 5 and 6. Each circle bestows an effect on those who use it.

The 30-foot-tall chamber is the only area in the dungeon physically connected to the sewer system above. The rest are only accessible by traveling through the magic circles. The east stone door features a low-quality carving of a robed skeleton holding a large scythe.

Circle of Pain. This magic circle connects areas 1 and 3. Creatures that use it feel a searing pain. They have disadvantage on attacks and ability checks for 5 minutes.

Circle of Limits. This magic circle connects areas 1 and 4. Creatures that use it have their hearing and sight senses reduced to a distance of 10 feet for 1 hour.

Pieces of parchment stamped with deranged ramblings about necromancy and the power of death lie scattered across the mage’s study in disarray.

The room contains Mageddan’s research room and a collection of tomes, scrolls, and papers written by the undying necromancer. An investigator deduces from the faint dust layer on the desk and the burned candles that it was last used at least 10 days ago (DC 16 Investigation).

Immortality Lore. Studying the documents on the desk for 1 hour reveals that Mageddan’s weak version of the lich’s magic is a mockery in comparison. It does not truly make him immortal since his body can be reformed only one hundred times. However, that is long enough to decimate Bronzebrick City and even expand to other places. The necromancer must still be stopped.

A single stone sarcophagus lies by the east wall of this chamber. A faint orange light filters from under the carved lid. The light varies in intensity.

After being defeated in combat, Mageddan’s life force returns to the phylactery in area 7, and a new body forms in the sarcophagus here. The process takes about 30 minutes. The characters must defeat Mageddan here and destroy the phylactery to save Bronzebrick City.

Mageddan, the Deathless. The undead mage emerges from his enclosure. With a loud, low-pitched growl, the room’s shadows shift and coalesce into two wraiths and two specters that fight alongside him.

People need to squeeze through the 2-foot-narrow tunnels. The southwest section features a chamber with three standing sarcophagi. The creatures within react to the slightest of noises outside (see below).

Famished Guardians. Three ravenous ghasts remove the lids from their stone enclosures whenever a creature comes within 10 feet of them. They fight until slain.

Circle of Rapture. This magic circle connects areas 4 and 6. Creatures that use it become euphoric and blissful for 1d6 rounds (DC 16 Wisdom save). While in this state, they allow the shadows in area 6 to attack them.

Circle of Selfless Abandon. This magic circle connects areas 4 and 7 but it is turned off by default. Creatures that use it feel an endearing attraction to surrender their soul to the phylactery in area 7 (DC 14 Charisma). The victim holds the cursed trinket and allows its soul to be siphoned out, dealing 20 necrotic damage per round.

Pulling the lever requires the strength of a giant. Three people can attempt to move it (DC 22 Athletics). Otherwise, one of the nine potions on the stone shelves gives the user the power to do so. All the vials look the same. Roll randomly each time a character drinks one. When drinking any incorrect ones, the user feels a surge of false strength and takes 3d6 poison damage.

The iron lever by the north wall is visible for a moment before the magical sconce fizzles out.

The chamber becomes dark when a creature first arrives. Each creature that comes may be unable to operate the lever because of the magic circle (see area 4).

Opportunist Attack. There are six shadows. They prioritize creatures in a state of rapture from the circle.

A fist-sized, emerald-like, glowing gem floats over a stone pedestal. Its light vibrates and pulses like a beating heart. Something sparkles within it.

Mageddan’s pseudo-phylactery lies undefended. However, characters affected by the magic circle may surrender their souls to the phylactery if they are not careful (see area 4). If a person perishes during this process, Mageddan’s body in area 3 reforms instantly.

The Phylactery is Destroyed

The cursed phylactery in the Scarlet Sepulcher is a frail arcane relic. A character can strike its surface with any metal weapon or implement to destroy it. The phylactery stops glowing and falls to the floor, cracked and inert. If Mageddan has already been defeated in area 3, then the necromancer is destroyed. Otherwise, Mageddan’s new body in area 3 is unaffected by the relic destruction. The characters must still defeat him there. When the characters return to the city, they are given a hero’s welcome and paid the promised reward.

A spellcaster who studies the research papers in area 2 can attempt to change the phylactery’s owner after destroying Mageddan’s body in area 3. The complex ritual (DC 20 Arcana) allows the caster to become attuned with the phylactery and become in some way resilient to death. Failure in this ritual causes Mageddan’s consciousness to take over the spellcaster’s body. Against all odds, the befoul necromancer has returned!