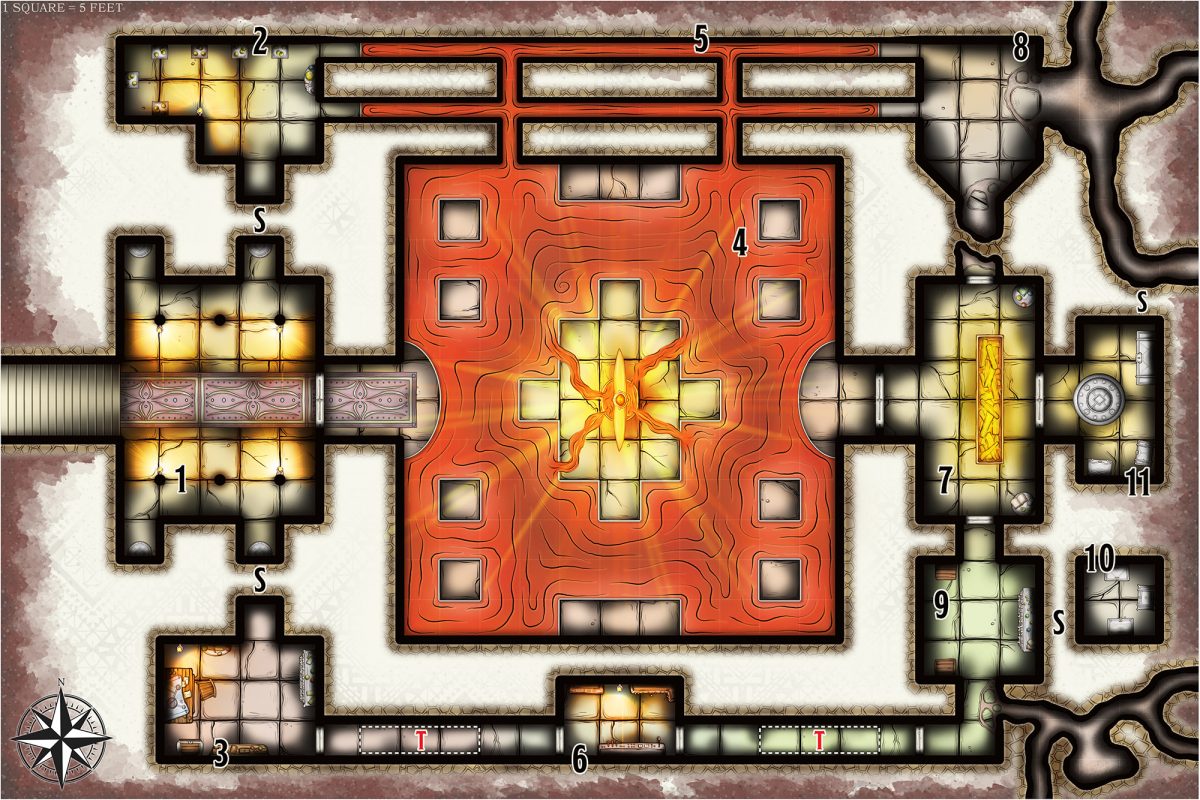 To create such a weapon, you need to wield the fire itself and forge it into the blade…

Annals of the Dwarven Effigies

The great weapons of yore featured in fables and myths are rumored to have the power to bring titans and dragons down. The heroes in the stories wield legendary blades with otherworldly power. These weapons are extremely rare now. They were destroyed, hidden away, or retrieved by dragons or demigods. But there is one place where such a weapon can be forged, the Anvil of Fire.

In ancient times, all legendary weapons were created by either the elves or the dwarves. Elvish weaponry was fine and intricate in its construction; slim blades that could pierce any metal or armor. On the other hand, dwarves created strong, sturdy weapons embedded with their runes of power. In dwarven culture, one of their most-respected deities is the great Hammer God. It has many names but it is always represented by a stout, muscular dwarf-like individual that wields a forge hammer.

The Hammer God forged the weapons that the gods themselves wielded in their wars. It is said that the dwarven god wielded a legendary war-hammer capable of sundering the fabric of reality and bending the planes around its pounding. Alas, they remain myths. There is no conclusive evidence of these artifacts existing.

However, dwarves have a cultural tradition of forging amazing inventions by wielding the power of fire and metal. Attempting to recreate the myth of the Hammer God, the dwarves created the Anvil of Fire. It is an adamantine anvil that features a lava font at its center. It channels the power of fire and the heart of the mountain, or so the dwarven tales say. Master craftsmen of dwarven heritage have created legendary weaponry with the anvil. Its location, however, remains a great secret.

The characters need to find the Anvil of Fire to achieve a larger goal in their overarching quest. The ancient dwarven relic is capable of forging a truly marvelous weapon, the like the world has not seen in millennia. The anvil can be used to reforge a sundered blade from ancient times. The weapon they need to defeat their nemesis can be procured by using the Anvil of Fire.

The anvil’s resting place is located at the heart of a mountain that the dwarves consider sacred, Hammer Mountain. The characters must earn the dwarves’ favor to gain access to the anvil. Since Dwarvish settlements have been under attack by goblinoid forces for the last year. If the characters help with that matter, the dwarves shall allow them to reach the heart of the mountain.

The following features correspond to the dungeon of the Anvil of Fire; areas 1 through 11.

Smell and Sounds. The pungent smell of sulfur permeates the area. The low-pitched sound of lava slowly moving can be heard from outside the dungeon.

Secret Doors. Pulling hidden levers causes sections of the walls to move aside and reveal narrow passages (DC 14 Perception). They close and reset after 10 minutes.

The dungeon’s antechamber is sparsely furnished with an intricate rug of rough fabric. Red light glows from under the eastbound door frame.

The 20-foot-tall domed ceiling is carved with images of the Hammer God forging a mighty battle axe. The doors to area 4 are locked (DC 15 Thieves’ Tools).

Fire Guardians. Six fire mephits bound to the Anvil of Fire greet the characters with their Breath Weapons.

Treasure. There are 48 golden medallions in the chamber (250 gp each). Stealing them incurs the wrath of all dwarves within 150 miles of Hammer Mountain.

The archive contains a repository of information about the anvil and those who have used it. Studying the documents for 1 hour reveals that the anvil’s chamber is too hot for mortals to endure. The control room (area 6) can lower the temperature to a more manageable level.

4. The Anvil of Fire

A 3-foot-tall glowing anvil dominates the center of the lava-filled room. Molten rock pours from it. The mountain’s true power flows through its core.

The fabled Anvil of Fire rests in the middle of a lava pool. The characters must jump across platforms to reach it. The characters can use it to forge a legendary and unique weapon (see Development). When a person comes within 10 feet of the Anvil of Fire, the guardians bound to it emerge from the lava to protect it from wrongdoers.

High Temperatures. If the characters have not lowered the temperature in the control room (area 6), being in this chamber deals 5 fire damage per round.

Anvil Guardians. The characters must prove themselves worthy of the Anvil of Fire. Two fire elementals, one fire salamander, and four fire mephits emerge from the searing hot lava and attack the characters.

An arrangement of 2-foot wide lava canals connects areas 2, 8, and 4. The canals are narrow enough for a good climber to squeeze through them without touching the lava below. A DC 14 Athletics check allows a creature to move its speed through the canals. Failure by 5 or more means the creature loses its grip on the walls and partially touches the lava (see Features of the Dungeon).

Mischievous Mephits. Whenever a creature reaches the mid-section of the canals, two fire mephits emerge from the lava and attempt to make climbers fall.

The small room features three control panels with numerous levers, buttons, and wheel valves. It is a complex dwarven machine of exquisite quality.

The characters can reach this chamber from either area 3 or 9 but the halls feature a deadly trap. The control room manages the temperature of the anvil’s chamber (area 4). Perusing this device requires a keen mind and some trial and error (see Control Room System below).

Thrusting Spears Traps. A creature stepping on the center of the marked trap area (see map) triggers dozens of spears to thrust from the north wall. Creatures in the area take 8d6 piercing damage (DC 16 Dexterity save).

7. Hearth of the Ancients

A long fireplace by the chamber’s center provides a warmth that soothes the soul and the mind.

The magical fireplace has burned for thousands of years. Dwarvish runes on its side provide the magic that burns its eternal embers. Characters resting in this chamber gain double the benefits from a short or long rest. In addition, healing effects are doubled while in this chamber.

The purpose of this chamber has been lost to time. Cave-ins, natural erosion, and the activity of burrowing creatures have damaged the structural integrity of this place.

There are transparent ooze spots on the floor of this chamber. A tracker determines that the corrosive substance has damaged the floors. This is the work of creatures like carnivorous oozes (DC 15 Survival).

Ravenous Scavengers. Three black puddings roam these tunnels and consume anything they find. They approach when creatures explore area 8 or the tunnels.

9. Annals of the Dwarven Effigies

A detect magic spell reveals an abjuration aura that protects the bookcase. It protects its contents from the passage of time. Examining the documents for 1 hour reveals a floor-plan of the dungeon, a manual for the control room (see area 6), and instructions for using the Anvil of Fire. Understanding how to use the anvil and create legendary weapons requires at least 2 weeks of study.

Secret Passage. Pulling a golden book causes a tunnel to area 10 to reveal itself (DC 18 Investigation).

Treasure. The bookcase contains a pouch with 200 gp, a two spell scrolls of protection from energy (fire).

The small chamber contains a one-foot-tall engraved, stone circle, and several soapstone coffers. The walls are sculpted with intricate effigies of the Hammer God in different proud postures.

The chamber makes visiting the Anvil of Fire and the Hearth of the Ancients a simple task later on. However, returning here may be of no use unless decades have passed (see Development). The dwarvish runes read: “Here lies the fastest pathway to the Anvil of Fire”.

Rune-Carved Circle. The shallow stone platform features a complex rune sequence that can be used with the spell teleportation circle. The characters can use it to return to the Hearth of the Ancients later on.

Poison Needle Trap. Manipulating any of the coffers’ locks triggers a trap. A hollow needle shoots from the lock and injects a lethal dose of poison. The victim takes 10d6 poison damage (DC 18 Constitution save).

The temperature of the anvil’s chamber in area 4 can be controlled by operating the machinery in this room. When the characters arrive, staying in area 4 deals 5 fire damage per round. As it is, fighting the guardians or operating the anvil is a practical impossibility.

A person can, through manual examination or trial and error, infer or figure out how to operate the dwarvish machine. When a creature attempts to use it, they must roll 2d6, add the results and compare them to the table below. Creatures that invest the time to read the manual for the control room in area 9 add a +2 bonus to this roll.

A character that studies the documents and scrolls in area 9 knows enough of the process to operate the Anvil of Fire. The legendary anvil’s powers guide those who have proved themselves to be worthy of its use. The character can choose any kind of metal weapon to forge or remake a sundered weapon whose pieces they possess. The process of creating a new piece of weaponry requires uninterrupted work for one month.

After the weapon is forged, the Anvil of Fire becomes dormant for 10 years and cannot be used again during that period. The characters’ creation and their deeds shall be regarded with pride by dwarven societies.

The characteristics and properties of such a legendary weapon are for the GM to determine. They should relate to the overarching campaign and the goal that the adventuring party wishes to achieve. Like defeating a powerful enemy or stopping an otherworldly force that threatens the peace and safety of a kingdom or large region. 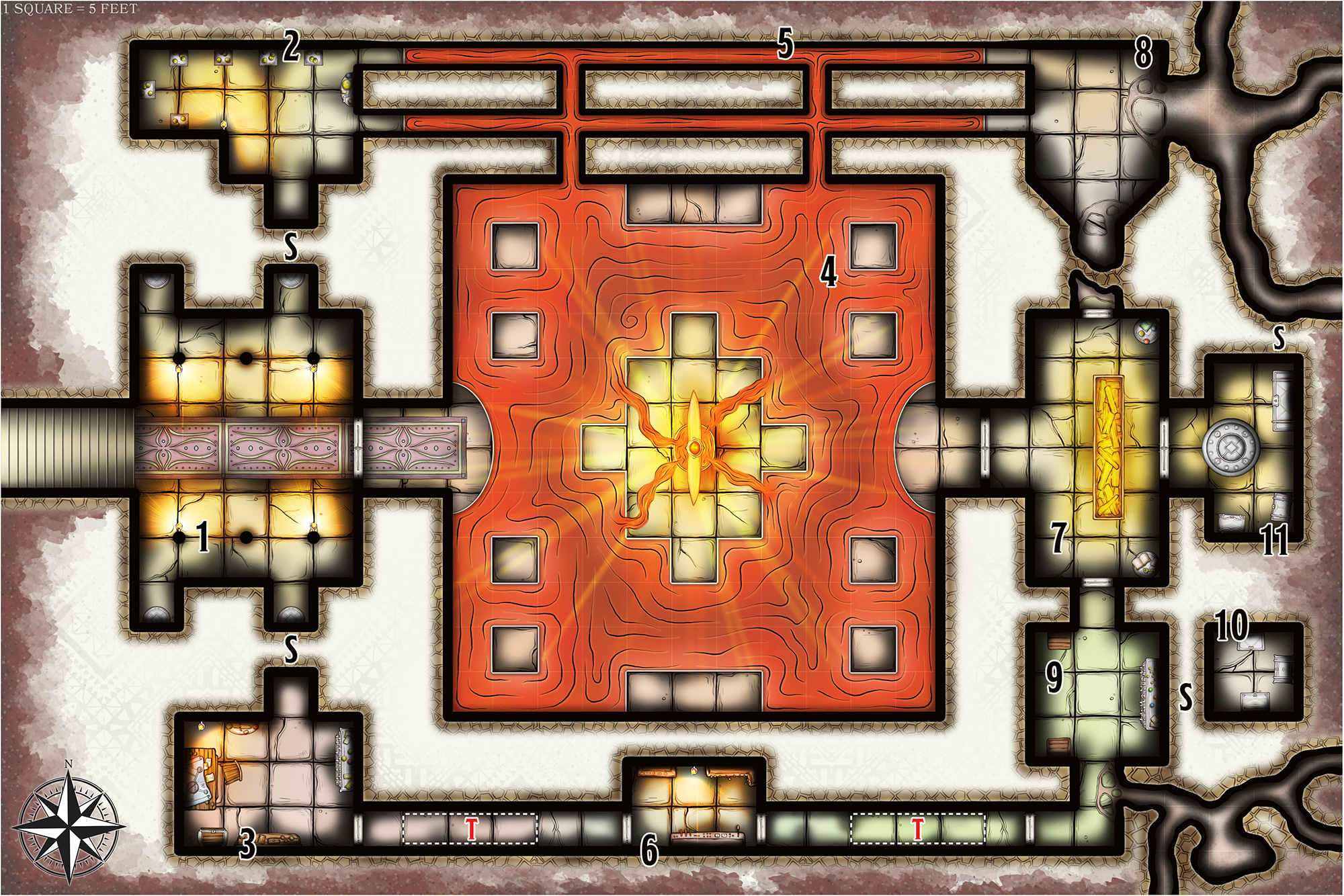