Chapter 12, the tower of vengeance paves the way for the rest of the campaign. The shady character, Vizeran DeVir, is cruel, unfair, old, difficult to trust and evil, but he presents the only plausible plan for surviving the rage of demons. He plans to craft a talisman called the Dark Heart, which will work as a focus and point of origin for a demonic ritual he will perform. This ritual is so evil in its nature that it’s able to compel the mightiest demons to a single location, wherever the Dark Heart is placed (Vizeran explains that the Dark Heart must be placed where the original ritual was performed, in Menzoberranzan, this is a lie, it could be anywhere, but Vizeran wants the demon rage unleashed on the drow city again, out of vengeance). The plan is sound and can succeed, but critical ingredients for the ritual are missing. And Gromph Baenre’s Grimoire, his evil spell book, is still hidden in Menzoberranzan, it holds the secret to perform the demonic ritual.

The Araj Tower’s location is a secret very few know, it is located near Blingdenstone. When the PC’s approach the place, someone is already waiting for them, Grin Ousstyl, an apprentice mage who is being tutored by DeVir himself. He greets them and escorts them through a secret door. After a long winding tunnel they reach an underground chamber where the tower is located.

Grin Ousstyl will be of some importance later on in chapter 15, when he will betray his master Vizeran DeVir. This part of the adventure let’s him fall into the background, so make sure you give ample opportunities to your PC’s to speak with him and get to know him, the way to the tower is the best moment, he could talk a little about DeVir himself (remember he is loyal to him), or he could talk about the drow society in Menzoberranzan. The PC’s might no trust him after their past experiences with the drow, nevertheless, don’t miss this opportunity to introduce this character to the story, it makes for a contrasting moment later on, really not all drow are cut the same.

The book describes the different levels of the tower but a map is missing. This is a representation of the tower for flavor purposes. It’s unlikely that a fight breaks out here, but possible, since Vizeran DeVir is such an unlikable character. The map is great for descriptions and atmosphere. The second level of the tower usually only hosted cells, torture rooms and Grin’s quarters. Just recently, two rooms were cleared and fitted for visitors, expecting the PC’s.  Second level features 4 doors, 2 of them lead to guest rooms, a 3rd locked door leads to Grin’s quarters and 4th one hides the cells/torture rooms. 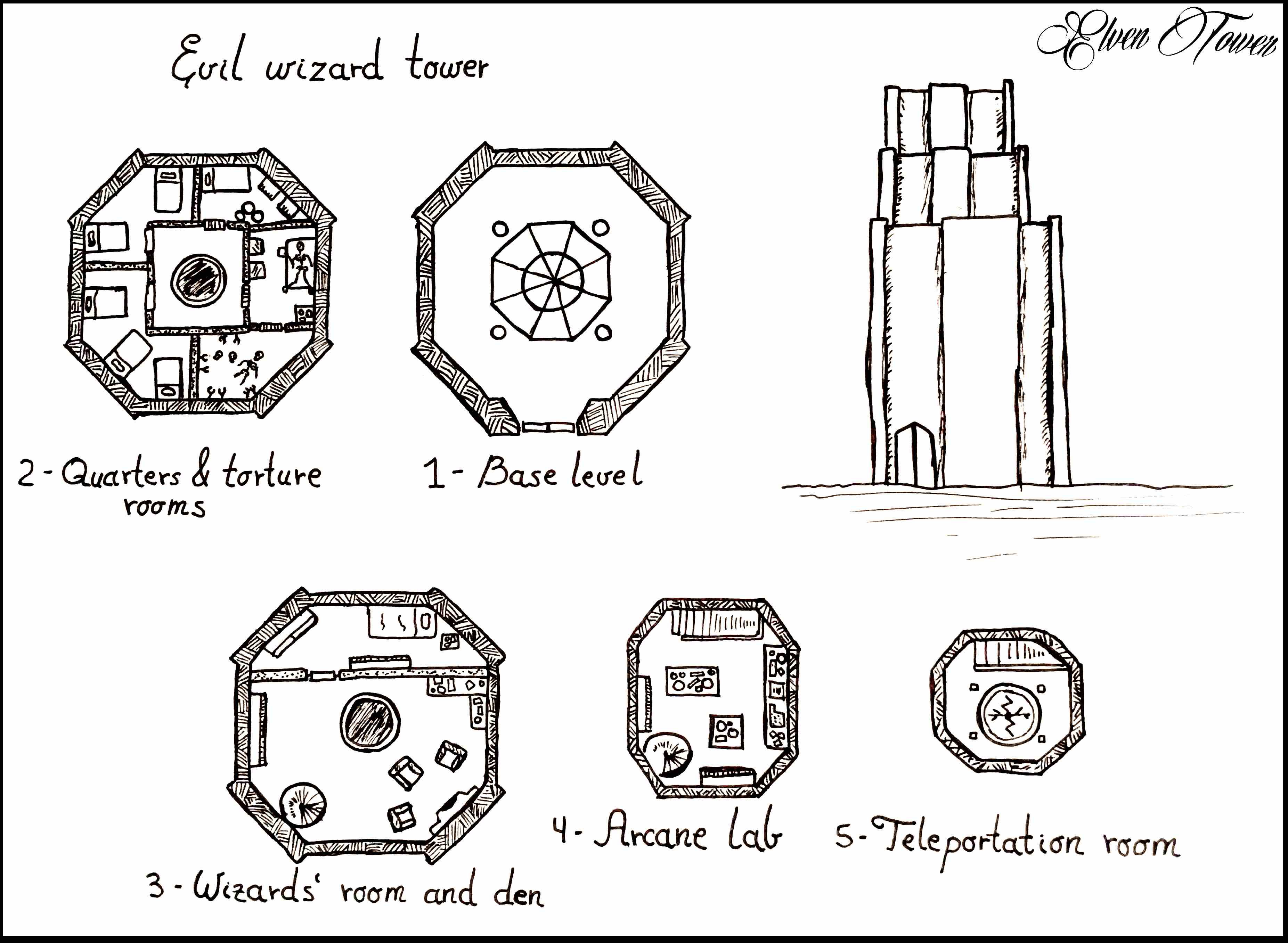 Vizeran meets the PC’s in his studio (3rd floor) , to explain his plan and make an arrangement. He also explains the nature of the rivalship between him and Gromph Baenre, who, even though he’s disappeared, is still appointed the Archmage of Menzoberranzan. DeVir also confirms the visions from Gravenhollow that suggest Baenre’s fault in bringing the demon lords to the underdark. Page 163 has a list of things DeVir can tell the players, he should give them all the information really (ignore the skill check to make him talk). He can help the PC’s by gifting them some Piwafwis (page 222), some amulets of protection from fiends and the use of his tower as a safe heaven.

His part of the deal is: he will craft the talisman and perform the ritual. The PC’s have to procure the ingredients and Gromph’s Grimoire. This is what the rest of the adventure is about, finding the different ingredients, it sounds dull, but it is the opposite, in order to get what’s needed, the party must visit the most exotic locations in the underdark.

There is one more thing, Gromph Baenre’s grimoire, even after crafting the Dark Heart, DeVir needs this book to study and perform the ritual, the book is hidden in Menzoberranzan, in Sorcere, the mages’ tower (page 207).

And that is the scope of this chapter, there are instructions at the end of the chapter for succeeding without Vizeran’s involvement. This is important for good aligned parties, as working with an obviously evil individual might pose a challenge. It is possible; a spellcaster in the party can decipher the ritual from the grimoire and perform it on his own for the adventure’s final scenario (although he will be left with 3 levels of exhaustion). Alternatively, they could request help from someone else, Lord Zelraun Roaringhorn (from chapter 8) for example.