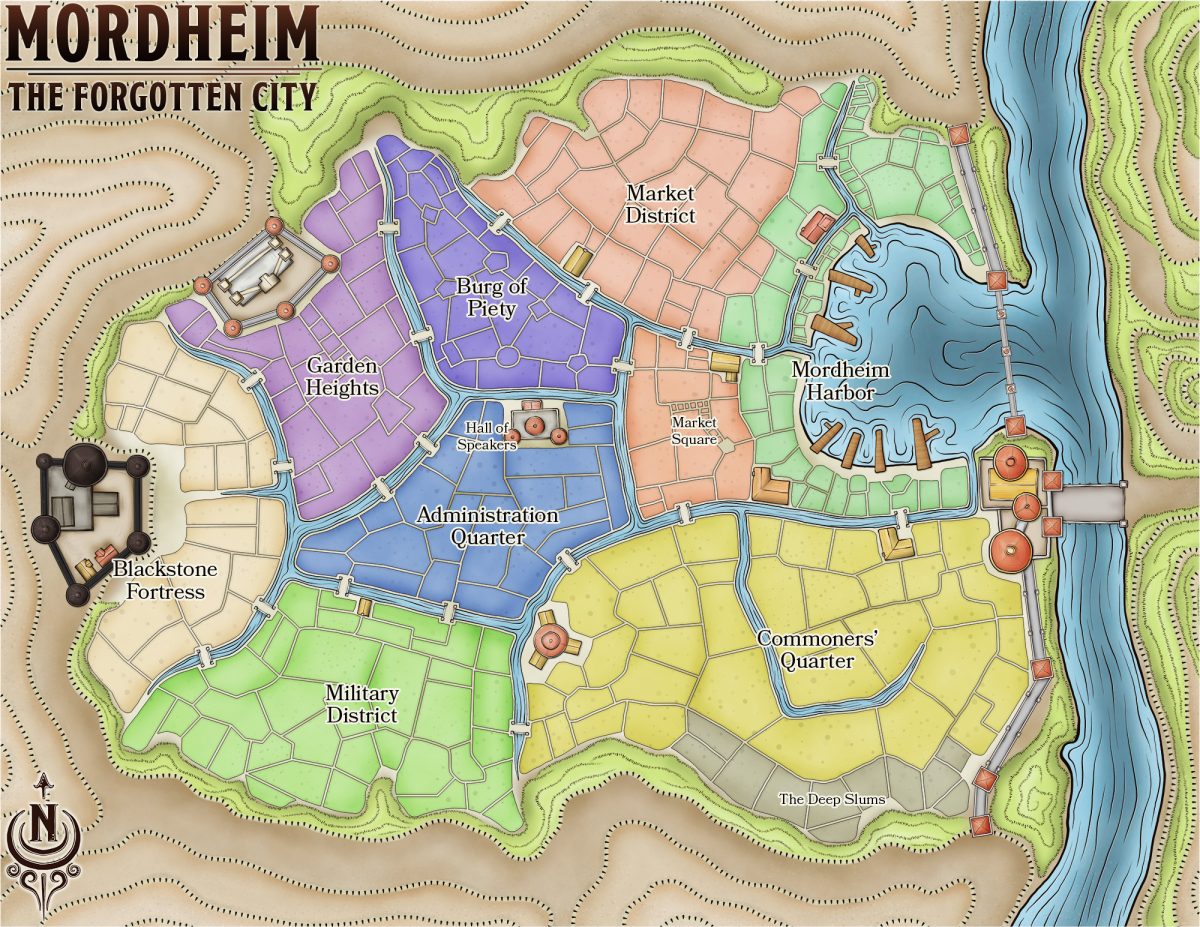 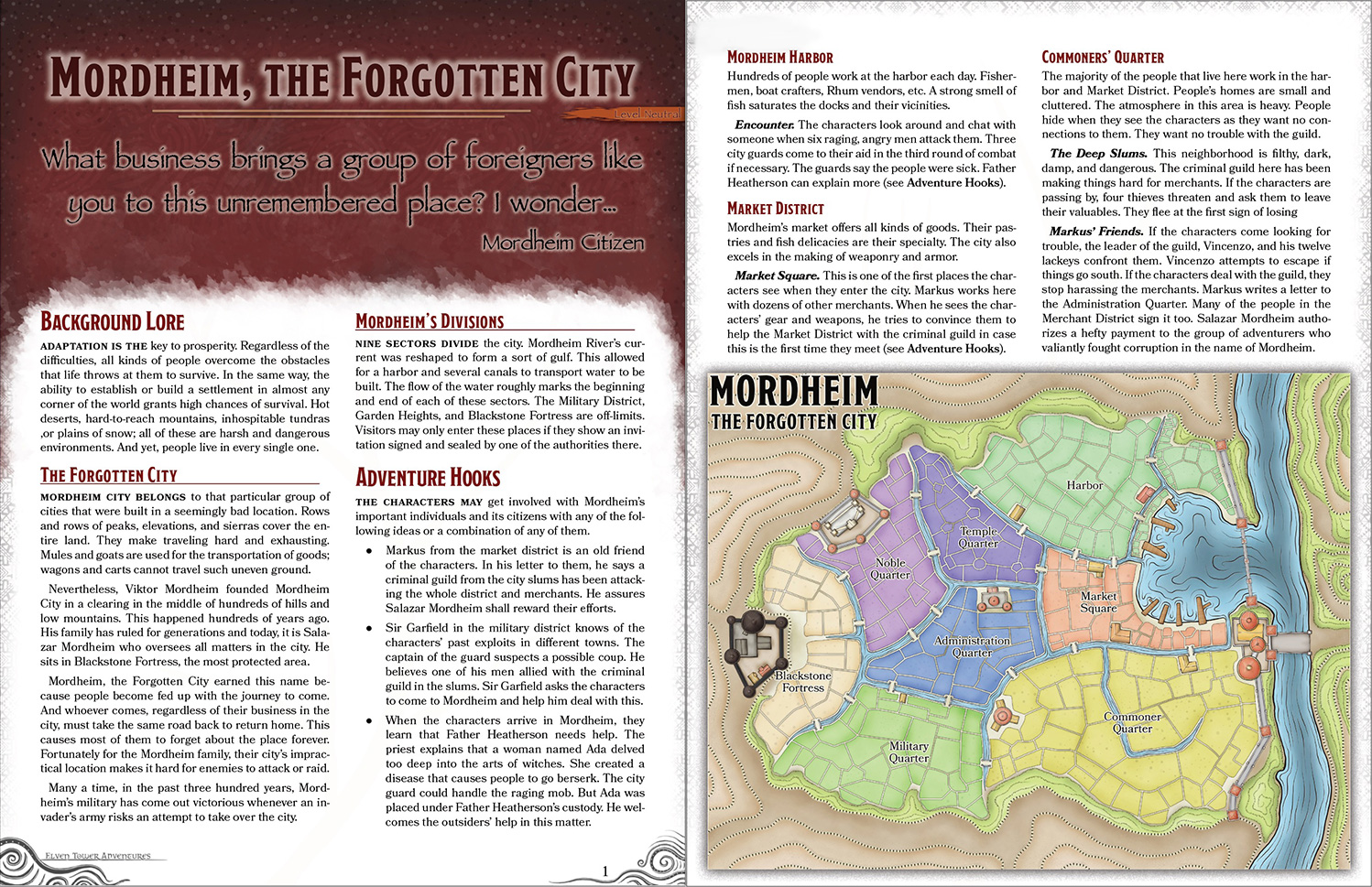 What business brings a group of foreigners like you to this unremembered place? I wonder…

Adaptation is the key to prosperity. Regardless of the difficulties, all kinds of people overcome the obstacles that life throws at them to survive. In the same way, hu­man’s ability to establish a settlement in almost any cor­ner of the world grants high chances of survival. Hot des­erts, hard-to-reach mountains, inhospitable tundras, or plains of snow; all of these are harsh and dangerous en­vironments. And yet, people thrive in every single one.

Mordheim City belongs to that particular group of cities that were built in a seemingly bad location. Rows and rows of peaks, elevations, and sierras cover the en­tire land. They make traveling hard and exhausting. Mules and goats are used for the transportation of goods; wagons and carts cannot travel such uneven grounds.

Nevertheless, Viktor Mordheim founded the homolo­gous city in a clearing in the middle of hundreds of hills and low mountain ranges hundreds of years ago. His family has ruled it for generations. Today, it is Salazar Mordheim who oversees all matters in the city. He sits in Blackstone Fortress, the most protected locality.

Mordheim, the Forgotten City, earned its name be­cause people become fed up with the journey to come. And whoever comes must take the same road back to return home. Or pay for a costly, long journey on a boat. This causes most of them to forget about the place for­ever. Fortunately for the Mordheim family, their city’s im­practical location makes it hard for enemies to attack.

Many a time in the past three hundred years, Mord­heim’s military has come out victorious whenever an in­vader’s army risks an attempt to take over the city.

The city is divided into nine sectors. Mordheim River’s current was reshaped to form a shallow gulf bay. This allowed for a harbor and several canals to transport wa­ter to be built. The flow of the water roughly marks the beginning and end of each of these sectors. The Military District, Garden Heights, and Blackstone Fortress are off-limits. Visitors may only enter these places with an invitation signed and sealed by the authorities there.

The characters may get involved with Mordheim’s important individuals and its citizens with any of the fol­lowing ideas or a combination of any of them:

Hundreds of people work at the harbor each day. Fish­ermen, boat crafters, rum vendors, etc. A strong smell of fish produce saturates the docks and their vicinities.

Encounter. When the characters look around and chat with someone, six raging, angry men attack them. Three city guards come to their aid in the third round of combat if necessary. The guards say the people were sick. Father Heatherson can explain more (see Adventure Hooks).

Mordheim’s market offers all kinds of goods. Their pas­tries and fish delicacies are their specialty. The city crafts­men also excel in the making of weaponry and armor.

Market Square. This is one of the first places the char­acters see when they enter the city. Markus works here with dozens of other merchants. When he sees the char­acters’ gear and weapons, he tries to convince them to help the Market District with the criminal guild in case this is the first time they meet (see Adventure Hooks).

The majority of the people that live here work in the har­bor and Market District. People’s homes are small and cluttered. The atmosphere in this area is heavy. People hide when they see the characters as they want no con­nections to them. They want no trouble with the guild.

The Deep Slums. This neighborhood is filthy, dark, damp, and dangerous. The criminal guild has made things hard for merchants. When the characters pass by, four thieves threaten them and ask them to leave their valuables. They flee at the first sign of armed resistance.

Markus’ Friends. If the characters come looking for trouble, the leader of the guild, Vincenzo, and his twelve lackeys confront them. Vincenzo attempts to escape if things go south. If the characters deal with the guild and they stop harassing the merchants, Markus writes a let­ter to the Administration Quarter; many of the people in the Merchant District sign it too. Salazar Mordheim au­thorizes a hefty payment to the group of adventurers who valiantly fought corruption in the name of Mordheim.

The characters cannot enter this area unless they have an invitation. This is not a problem if Sir Garfield wrote to them about his suspicions (see Adventure Hooks).

Alternatively, if the characters help Markus deal with the criminal guild, Sir Garfield hears of this. He decides to contact the heroes and ask them for their help.

The Coup. Sir Garfield shares what he knows: he tells the characters that he arranged for a social gather­ing with his men, outside of work. He trusts the traitors might take advantage of this time to show their true col­ors. If the characters agree, the gathering is made at the kiosk in the Commoner’s Quarter at night.

He hires the characters to be their surprise bodyguards if something happens. His men and he will be unarmed to provoke the enemy’s attack. Sir Garfield’s suspicions are correct. The characters fight ten soldier traitors. Sir Garfield is speechless after the attack. A part of him wished he had been wrong. He writes Salazar Mordheim a letter of recommendation for the characters.

Mordheim’s administrative offices wear huge crimson and gold banners with the city’s sigil: a small black and white castle with a mountain range in the background.

Hall of Speakers. Each member of this group rep­resents one of the city’s districts. They wear purple robes and large hats with sigils of the district they speak for. They perform weekly ceremonies at dawn.

The characters learn of Father Heatherson’s problem when they enter the city (see Mordheim Harbor). If they wish to help, the priest takes them to the church’s base­ment. Ada has turned into an evil witch due to a magic rit­ual that went wrong. She must be purified and cleansed. Father Heatherson rewards the characters with a letter of recommendation for Salazar Mordheim.

The high-class society and the nobles in Mordheim live in this secluded district. Access to this sector is restrict­ed. All entrances are heavily guarded by armored men.

Salazar Mordheim rules the city from here. Dozens of servants maintain the fortress-manor running. The char­acters have no permission to come here nor does Sala­zar wish to speak with a bunch of unknown adventurers. However, if the characters help Markus, Sir Garfield, or Father Heatherson, the city’s ruler could have a job for them. However, that is an adventure for another time… 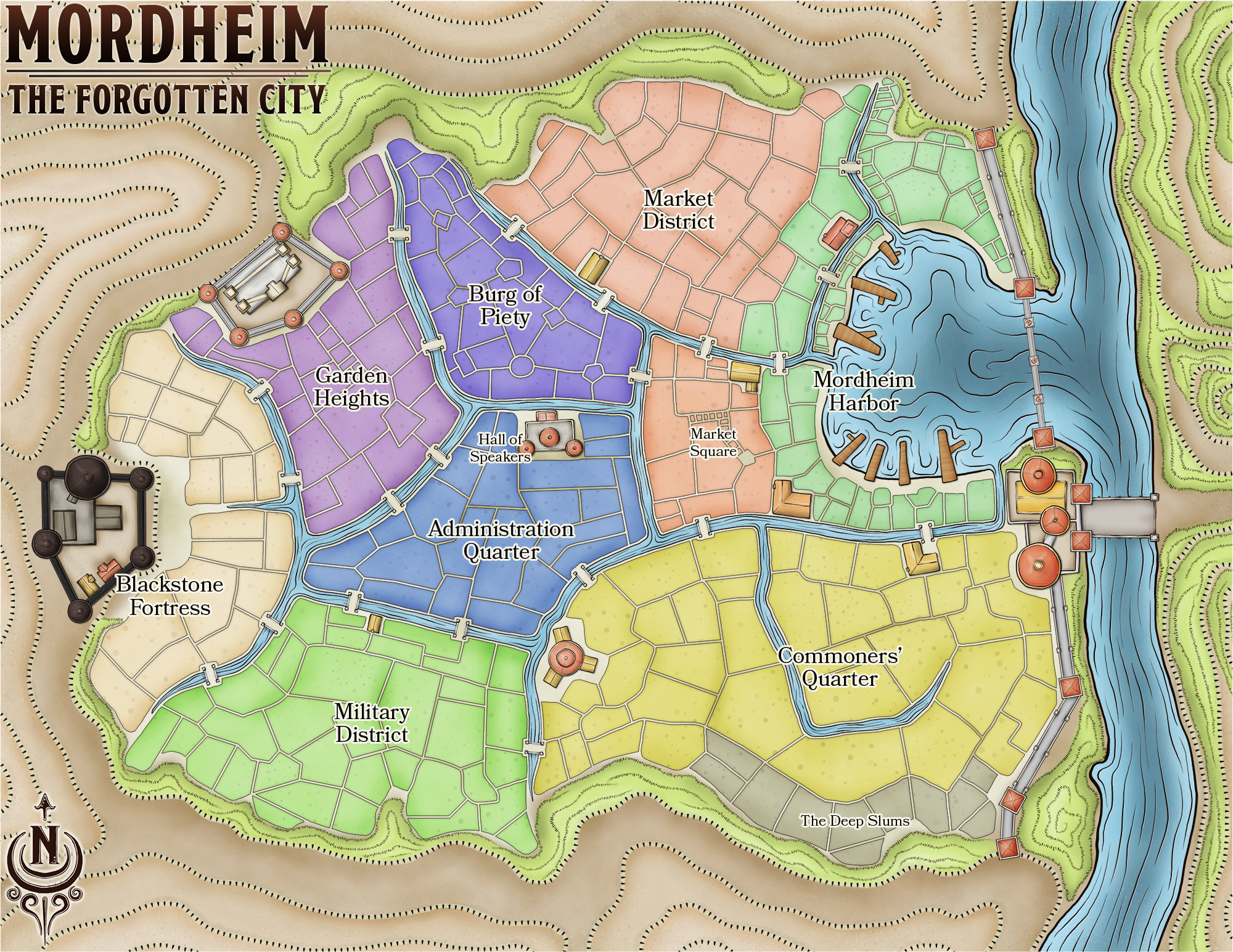