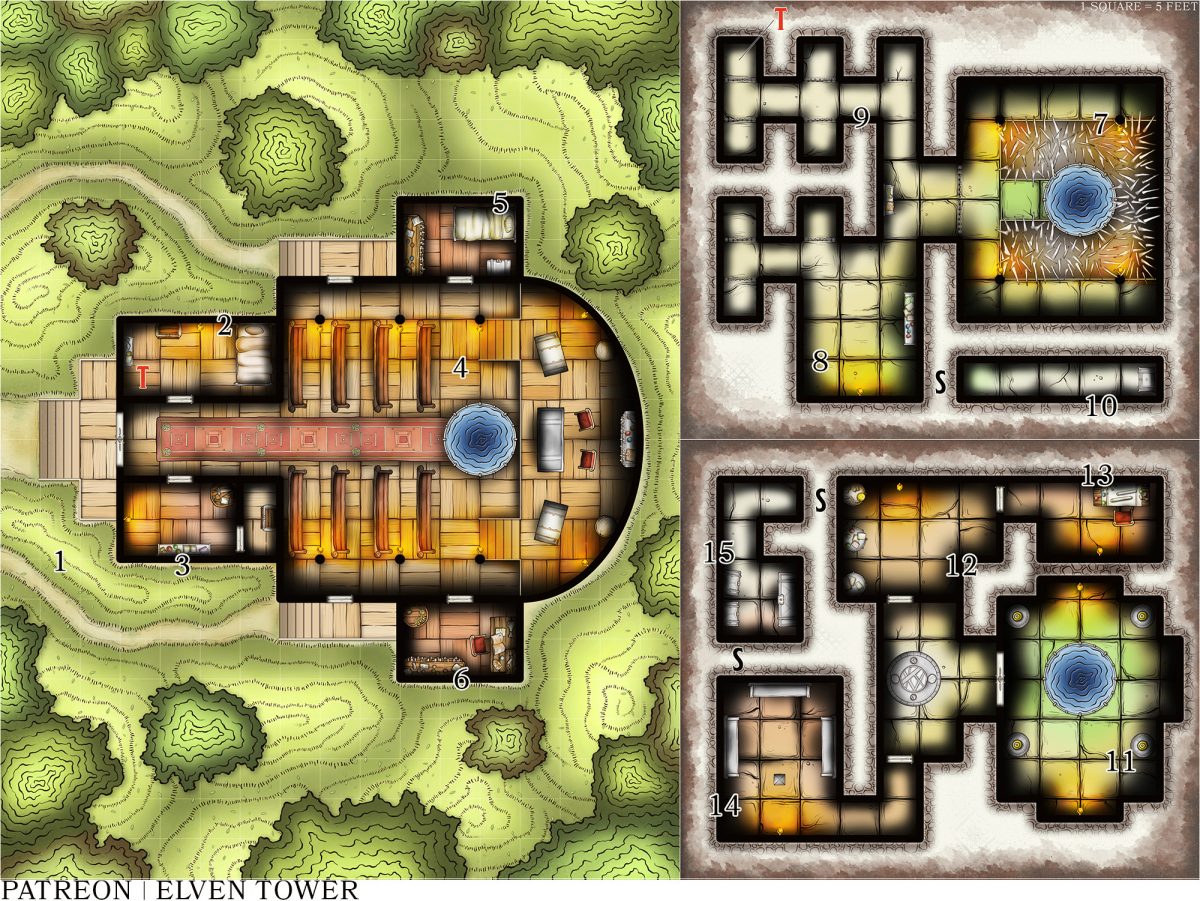 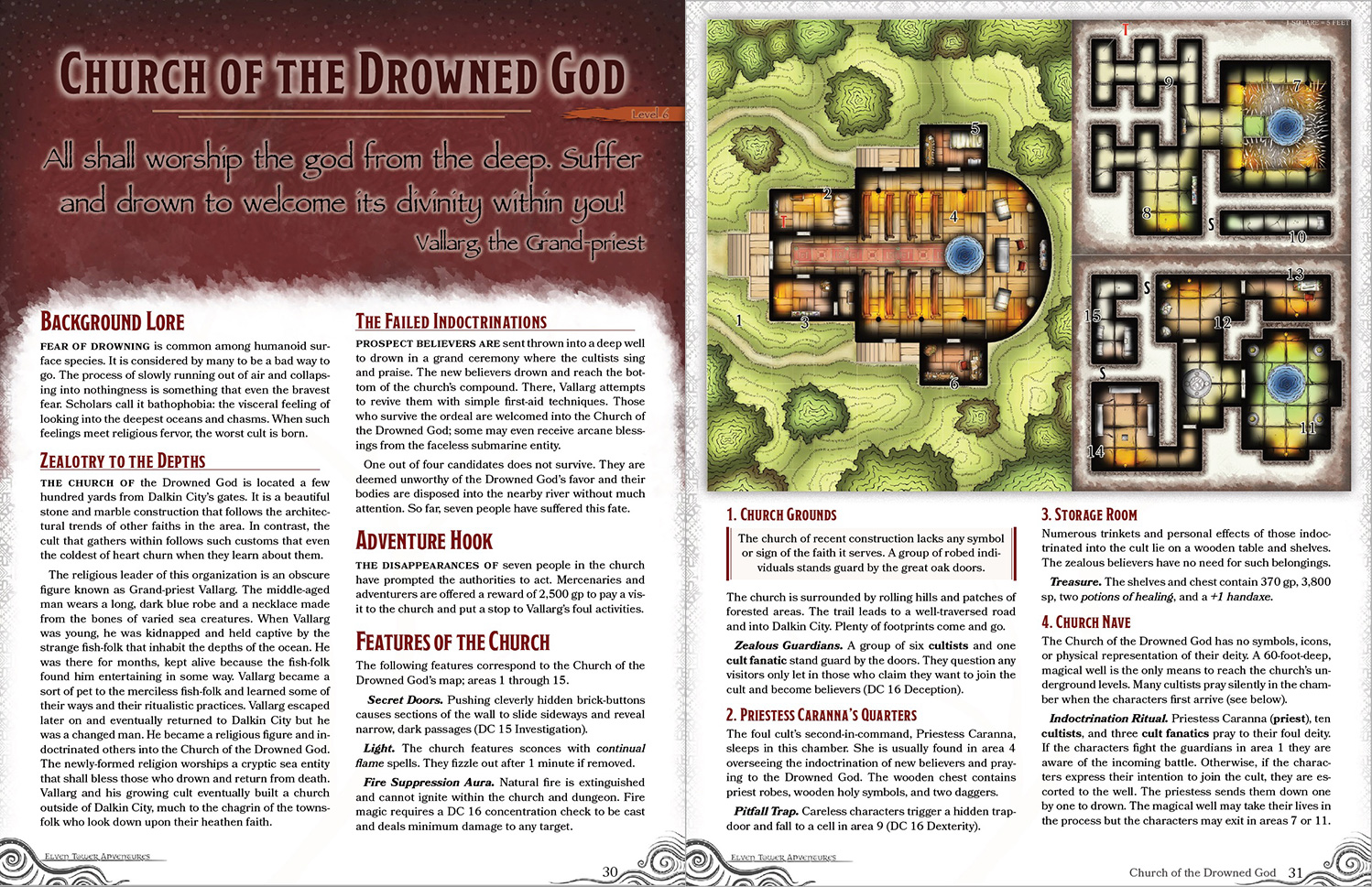 All shall worship the god from the deep. Suffer
and drown to welcome its divinity within you!
Vallarg, the Grand-priest

Fear of drowning is common among humanoid sur­face species. It is considered by many to be a bad way to go. The process of slowly running out of air and collaps­ing into nothingness is something that even the bravest fear. Scholars call it bathophobia: the visceral feeling of looking into the deepest oceans and chasms. When such feelings meet religious fervor, the worst cult is born.

Zealotry to the Depths

The church of the Drowned God is located a few hundred yards from Dalkin City’s gates. It is a beautiful stone and marble construction that follows the architec­tural trends of other faiths in the area. In contrast, the cult that gathers within follows such customs that even the coldest of heart churn when they learn about them.

The religious leader of this organization is an obscure figure known as Grand-priest Vallarg. The middle-aged man wears a long, dark blue robe and a necklace made from the bones of varied sea creatures. When Vallarg was young, he was kidnapped and held captive by the strange fish-folk that inhabit the depths of the ocean. He was there for months, kept alive because the fish-folk found him entertaining in some way. Vallarg became a sort of pet to the merciless fish-folk and learned some of their ways and their ritualistic practices. Vallarg escaped later on and eventually returned to Dalkin City but he was a changed man. He became a religious figure and in­doctrinated others into the Church of the Drowned God. The newly-formed religion worships a cryptic sea entity that shall bless those who drown and return from death. Vallarg and his growing cult eventually built a church outside of Dalkin City, much to the chagrin of the towns­folk who look down upon their heathen faith.

Prospect believers are sent thrown into a deep well to drown in a grand ceremony where the cultists sing and praise. The new believers drown and reach the bot­tom of the church’s compound. There, Vallarg attempts to revive them with simple first-aid techniques. Those who survive the ordeal are welcomed into the Church of the Drowned God; some may even receive arcane bless­ings from the faceless submarine entity.

One out of four candidates does not survive. They are deemed unworthy of the Drowned God’s favor and their bodies are disposed into the nearby river without much attention. So far, seven people have suffered this fate.

The disappearances of seven people in the church have prompted the authorities to act. Mercenaries and adventurers are offered a reward of 2,500 gp to pay a vis­it to the church and put a stop to Vallarg’s foul activities.

Features of the Church

The following features correspond to the Church of the Drowned God’s map; areas 1 through 15.

Light. The church features sconces with continual flame spells. They fizzle out after 1 minute if removed.

Fire Suppression Aura. Natural fire is extinguished and cannot ignite within the church and dungeon. Fire magic requires a DC 16 concentration check to be cast and deals minimum damage to any target.

The church of recent construction lacks any symbol or sign of the faith it serves. A group of robed indi­viduals stands guard by the great oak doors.

The church is surrounded by rolling hills and patches of forested areas. The trail leads to a well-traversed road and into Dalkin City. Plenty of footprints come and go.

Zealous Guardians. A group of six cultists and one cult fanatic stand guard by the doors. They question any visitors only let in those who claim they want to join the cult and become believers (DC 16 Deception).

The foul cult’s second-in-command, Priestess Caranna, sleeps in this chamber. She is usually found in area 4 overseeing the indoctrination of new believers and pray­ing to the Drowned God. The wooden chest contains priest robes, wooden holy symbols, and two daggers.

Numerous trinkets and personal effects of those indoc­trinated into the cult lie on a wooden table and shelves. The zealous believers have no need for such belongings.

The Church of the Drowned God has no symbols, icons, or physical representation of their deity. A 60-foot-deep, magical well is the only means to reach the church’s un­derground levels. Many cultists pray silently in the cham­ber when the characters first arrive (see below).

Indoctrination Ritual. Priestess Caranna (priest), ten cultists, and three cult fanatics pray to their foul deity. If the characters fight the guardians in area 1 they are aware of the incoming battle. Otherwise, if the charac­ters express their intention to join the cult, they are es­corted to the well. The priestess sends them down one by one to drown. The magical well may take their lives in the process but the characters may exit in areas 7 or 11.

The rather humble chamber contains a bed, a bookcase, and a stone coffer. Grand-priest Vallarg comes here only to rest. The bookcase contains a large collection of scrolls written by himself. The scrolls depict strange customs, rituals, and tenets for those who follow the Church of the Drowned God. Most texts are unintelligible or make out­landish assumptions about the world and magic.

This room was refitted as a library/archive for the Drowned God’s faith achievement, believers, and all kinds of records. The cultist, Arthur Vash, is in charge of collecting all possible data and cataloging it here. He de­fends the library with his life, if necessary.

The Records. A 30-minute search reveals a list of the twenty-two members of the faith, the six people who backed out at the last moment and are currently trapped in the cells (areas 8 and 9), and the seven poor ones who drowned in the well and were deemed unworthy.

Some people back out from the indoctrination process when they start to drown. The water well doesn’t have walls at this level or below, the water is suspended in mid-air; held by a magical force. Those who attempt to escape the well at this stage are greeted with pain.

The Water Well. Arcane currents pull subjects down to area 11 to drown. Any creature in the well may at­tempt to swim out to area 7 (DC 16 Athletics). On a fail, the creature is dragged down to area 11 and all air is drawn out of their lungs and body (DC 12 Constitution). On a fail, the creature has drowned and may die unless immediate medical aid is procured (DC 14 Medicine).

The Spikes. Creatures that swim out in this area fall into 3-foot-long spikes, are impaled, and take 4d6 pierc­ing damage. There’s a 1-in-8 chance they fall on the nar­row corridor and are not subject to the sharp spikes.

A large unoccupied chamber is adjacent to three 5-by-5- foot cells. A stone shelf by the east well contains person­al effects and belongings of current and past prisoners.

Three people hunch in the dark cells (commoners). Their names are Ana, Fargo, and Carkin. All of them in­tended to join the Drowned God cult in search of enlight­enment and a purpose in life but swam out of the well and survived the spikes in area 7. They are famished, ex­hausted, and too weak to fight. They help the characters fight off any remaining cultists if they are healed and fed.

A narrow, 5-foot-wide hallway is lined with five cells. Four of them are currently occupied by townsfolk in dis­tress (commoners). Their names are Darg, Juliana, Am­ary, and Felid. All of them intended to join the Drowned God cult in search of enlightenment but swam out of the well and survived the spikes in area 7. They are in the same sorry state as the prisoners in area 8.

Treasure. Darg managed to keep a small leather pouch with three emeralds (55 gp each). He offers them in ex­change for letting him and the other prisoners out.

An ornate, stone chest lies at the end of a dark se­cret hallway. A glow filters through its half-open lid.

The chest is empty. It is a clever trap designed to deal with would-be robbers and intruders. The cultists know of it and do not tamper with the grand-priest’s designs.

Lightning Trap. Interacting with the chest in any way causes a 5th level lightning bolt to shoot from the chest to the west-most wall in area 8. Creatures in this line take 10d6 lightning damage (DC 16 Dexterity).

Most creatures that reach this level through the well drown in the process. Customarily, Grand-priest Vallarg makes an effort to revive them but anyone can do it (DC 14 Medicine). Magical healing of any kind also revives a drowned individual. Four cult fanatics guard this room. They expect swimmers from time to time but are genu­inely surprised when they encounter armed resistance.

Four magical devices by the corners of this room keep the magical well in place. Destroying any of them causes the well’s magical barriers to falter. The water collapses and floods this level to a height of 3 feet.

When a new person is revived by Grand-priest Vallarg af­ter drowning in the well, they are brought to this cham­ber to leave all of their earthly possessions behind. The grand-priest explains that no belongings from their for­mer lives shall have any relevance or consequence in their new path. They are given a robe and a dagger.

Should a character go through the indoctrination pro­cess pretending to become a part of the cult, they are expected to leave all of their equipment behind after be­ing revived by the grand-priest in area 11. The oak door to area 13 features a strong lock (DC 20 thieves’ Tools).

Scrolls marked with divine runes and obscure for­mulae lie extended on the wooden desk along with special inks, pens, and other calligraphy utensils.

Grand-priest Vallarg has the only key to this place. It is his personal space for study and research into the di­vine capabilities of the cult he founded. He is dedicat­ed to finding more ways to manifest the powers of the Drowned God. Soon, he shall start teaching more magic to a select, elite group of talented loyal cultists.

The Grand-priest. Vallarg (level 9 cleric), three cult fanatics, a priest, and four cultists are in this room. They take great offense at intruders and people feign­ing to become a part of their cult. Vallarg casts dominate person on the strongest character and orders them to at­tack a spellcaster or someone without metal armor.

This is the church’s real vault. Only Grand-priest Vallarg, and Priestess Caranna are allowed within.

The Cult is Defeated

Defeating the Grand-priest and disabling the water well causes the cult to disband. Any remaining cultists lose their unearthly fervor and surrender. Dalkin City’s authorities put them behind bars for crimes against the city folk. The characters collect the 2,500 gp reward and are given the title of “Saviors of the Drowned”.

If any of the six people imprisoned in the cells makes it out alive, they tell the city about the character’s valorous exploits and organize a feast in their honor. The unlikely survivors are welcomed back into their former faiths as missionaries and bearers of the word of their god.

Grand-priest Vallarg defeats the characters in combat below the Church of the Drowned God. Against their will, surviving characters are thrown into the water well to drown. They are subjected to a new incantation devised by Vallarg that turns them into mindless thralls. 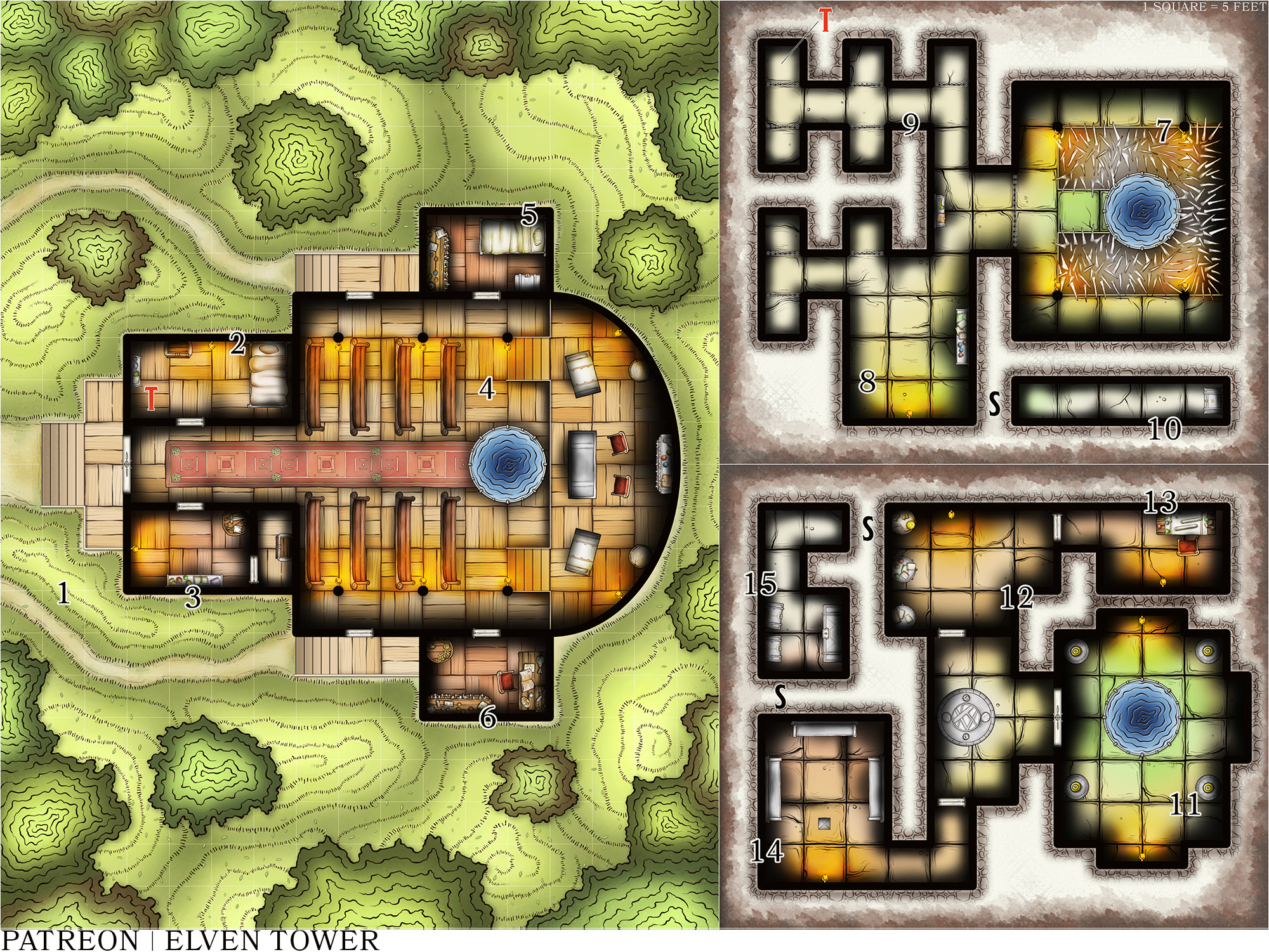