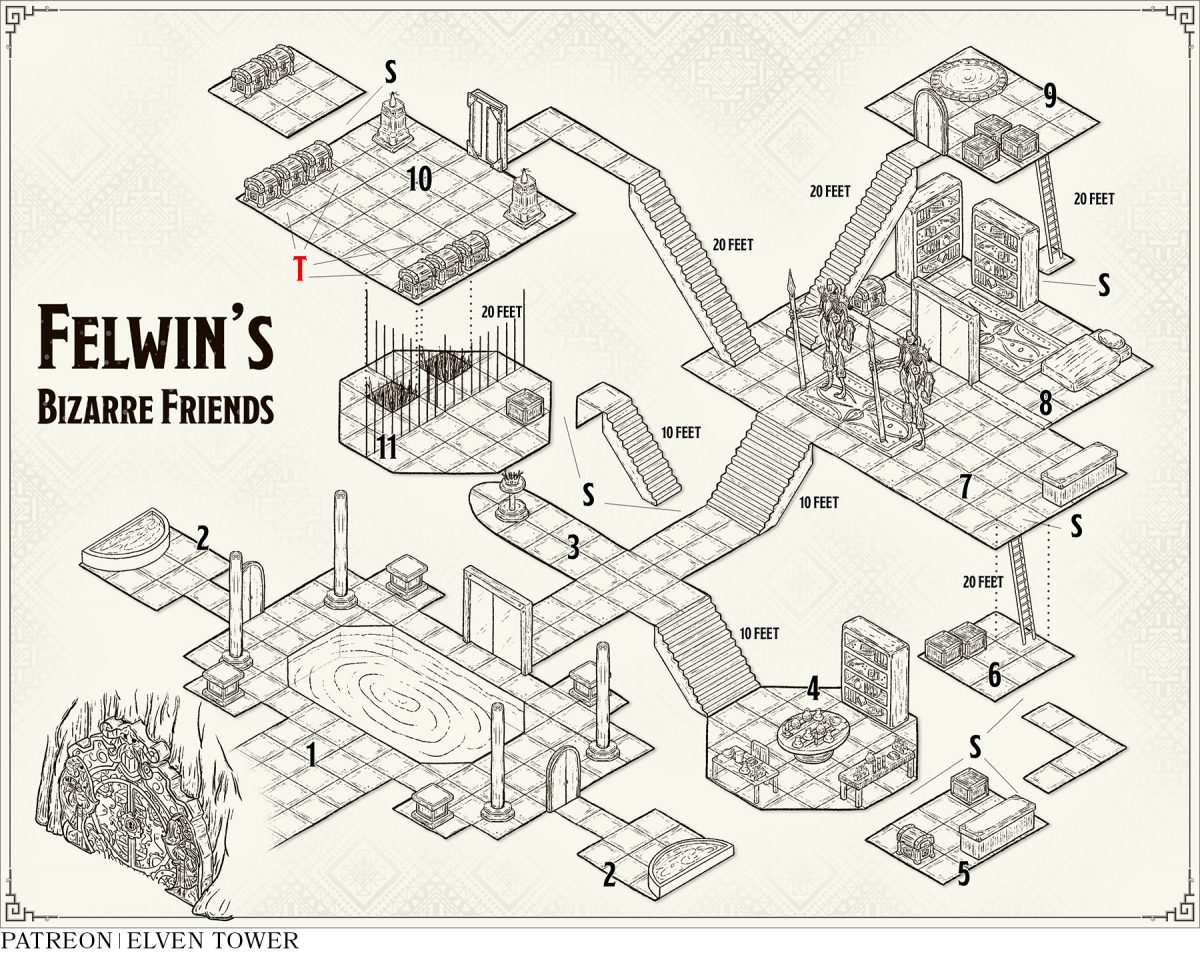 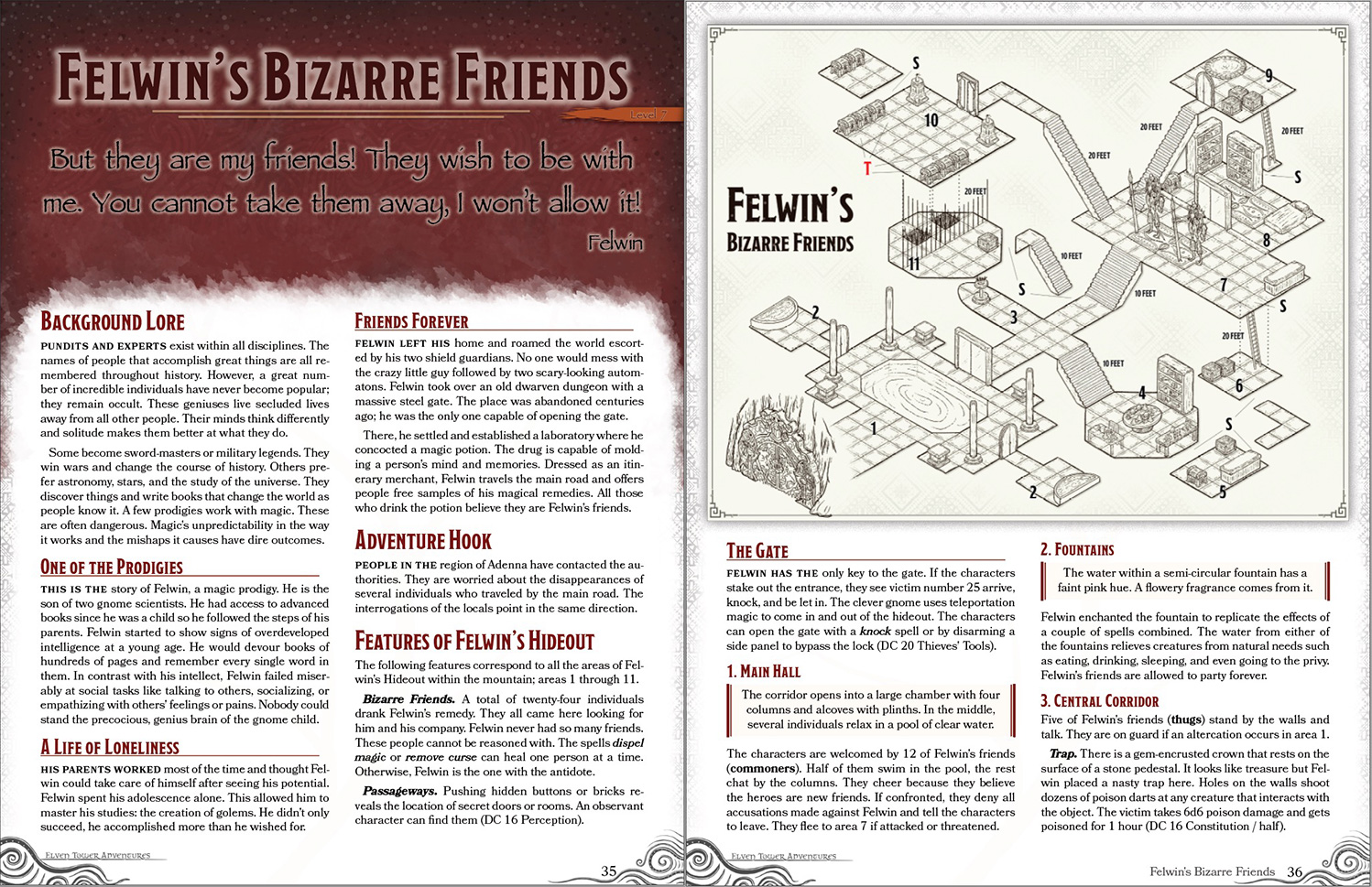 But they are my friends! They wish to be with me. You cannot take them away, I won’t allow it!

Pundits and experts exist within all disciplines. The names of people that accomplish great things are all re­membered throughout history. However, a great num­ber of incredible individuals have never become popular; they remain occult. These geniuses live secluded lives away from all other people. Their minds think differently and solitude makes them better at what they do.

Some become sword-masters or military legends. They win wars and change the course of history. Others pre­fer astronomy, stars, and the study of the universe. They discover things and write books that change the world as people know it. A few prodigies work with magic. These are often dangerous. Magic’s unpredictability in the way it works and the mishaps it causes have dire outcomes.

One of the Prodigies

This is the story of Felwin, a magic prodigy. He is the son of two gnome scientists. He had access to advanced books since he was a child so he followed the steps of his parents. Felwin started to show signs of overdeveloped intelligence at a young age. He would devour books of hundreds of pages and remember every single word in them. In contrast with his intellect, Felwin failed miser­ably at social tasks like talking to others, socializing, or empathizing with others’ feelings or pains. Nobody could stand the precocious, genius brain of the gnome child.

A Life of Loneliness

His parents worked most of the time and thought Fel­win could take care of himself after seeing his potential. Felwin spent his adolescence alone. This allowed him to master his studies: the creation of golems. He didn’t only succeed, he accomplished more than he wished for.

Felwin left his home and roamed the world escort­ed by his two shield guardians. No one would mess with the crazy little guy followed by two scary-looking autom­atons. Felwin took over an old dwarven dungeon with a massive steel gate. The place was abandoned centuries ago; he was the only one capable of opening the gate.

There, he settled and established a laboratory where he concocted a magic potion. The drug is capable of mold­ing a person’s mind and memories. Dressed as an itin­erary merchant, Felwin travels the main road and offers people free samples of his magical remedies. All those who drink the potion believe they are Felwin’s friends.

People in the region of Adenna have contacted the au­thorities. They are worried about the disappearances of several individuals who traveled by the main road. The interrogations of the locals point in the same direction.

The following features correspond to all the areas of Fel­win’s Hideout within the mountain; areas 1 through 11.

Bizarre Friends. A total of twenty-four individuals drank Felwin’s remedy. They all came here looking for him and his company. Felwin never had so many friends. These people cannot be reasoned with. The spells dispel magic or remove curse can heal one person at a time. Otherwise, Felwin is the one with the antidote.

Passageways. Pushing hidden buttons or bricks re­veals the location of secret doors or rooms. An observant character can find them (DC 16 Perception).

Felwin has the only key to the gate. If the characters stake out the entrance, they see victim number 25 arrive, knock, and be let in. The clever gnome uses teleportation magic to come in and out of the hideout. The characters can open the gate with a knock spell or by disarming a side panel to bypass the lock (DC 20 Thieves’ Tools).

The corridor opens into a large chamber with four columns and alcoves with plinths. In the middle, several individuals relax in a pool of clear water.

The characters are welcomed by 12 of Felwin’s friends (commoners). Half of them swim in the pool, the rest chat by the columns. They cheer because they believe the heroes are new friends. If confronted, they deny all accusations made against Felwin and tell the characters to leave. They flee to area 7 if attacked or threatened.

The water within a semi-circular fountain has a faint pink hue. A flowery fragrance comes from it.

Felwin enchanted the fountain to replicate the effects of a couple of spells combined. The water from either of the fountains relieves creatures from natural needs such as eating, drinking, sleeping, and even going to the privy. Felwin’s friends are allowed to party forever.

Five of Felwin’s friends (thugs) stand by the walls and talk. They are on guard if an altercation occurs in area 1.

Trap. There is a gem-encrusted crown that rests on the surface of a stone pedestal. It looks like treasure but Fel­win placed a nasty trap here. Holes on the walls shoot dozens of poison darts at any creature that interacts with the object. The victim takes 6d6 poison damage and gets poisoned for 1 hour (DC 16 Constitution / half).

Numerous glass containers, tubes, and chemical paraphernalia rest on the wooden tables here. A shelf full of books rests by the north wall.

Two people (thugs) guard this area. They come to their friends’ aid in area 3 if they hear a battle erupt.

Felwin asked all his dear friends to place their posses­sions here after they came. All agreed and complied.

Felwin is the only one who knows this place exists. The smell of fine wines and cheese permeates this chamber.

Magic Food. A detect magic spell reveals a bag of ber­ries. Creatures who eat them are prone to Felwin’s mag­ic (DC 15 Charisma). On a fail, the creature is charmed by Felwin. They shall protect him from any harm, trust him, and believe he is their one true friend.

Treasure. A connoisseur knows they can sell the ex­pensive wines and cheese here (DC 14 History). The full cart of these goods is worth 500 gp to the right buyer.

When the characters arrive at this area, Felwin’s body­guards (shield guardians) come to life and attack the characters until slain. The only other way to stop the guardians is to get to Felwin and knock him unconscious or steal the power stone he keeps in his robe.

Two shelves are full to the brim with books, tools, and other trinkets. The room contains a bed with silk linens, an embroidered rug, and a chest.

The scientist gnome only makes use of this room when he needs to rest. Felwin is nowhere to be found. The characters might notice the marks on the floor beside the shelf, meaning it has been moved in the past.

Treasure. The chest contains mundane stuff like lin­ens and clean clothes. The characters find valuable ob­jects here if they search the area, though (DC 16 Investi­gation). A compartment in a shelf hides a ruby (300 gp). A wooden crate under the bed contains a collection of hand-sculpted ivory animals. It is worth 2,500 gp.

A stone magic circle rests by the end of the room. Traces of magic strands fill the air with a blue hue.

The door to this area features a glyph of warding spell. Explosive runes welcome any creature who opens the door (6d6 fire damage, DC 18 Dexterity / half).

Magic Circle. An arcane spellcaster can concentrate for 10 minutes within the circle to regain one 1st-level spell slot. 20 minutes for a 2nd-level spell and so on.

Felwin placed several traps in this chamber. They are meant to fool intruders and treasure-seekers. None of the chests in this area contains any treasure.

Traps. Four squares of this area trigger traps (see map). The two chests on the west row shoot poison darts at any creature that interacts with them. The target takes 6d6 poison damage and becomes poisoned for 1 hour (DC 16 Constitution / half). The tiles marked on the east are pitfall trapdoors that lead to area 11. Falling crea­tures take 10d6 piercing damage as they are impaled in the spiked pits below (DC 18 Dexterity / half).

Magic Potion. A character can use a detect magic spell to reveal that the liquid within the vials has magical properties. Any creature who drinks from the vials must succeed on a DC 15 Charisma. On a fail, the creature is charmed by Felwin. They shall protect him from any harm, trust him, and believe he is their one true friend.

Felwin (mage) hides here with five of his friends (thugs). The characters may avoid the encounter with Felwin’s bodyguards if they encounter him here first. The clever gnome doesn’t fight to the death. He finds the right time to cast spells such as gaseous form, greater invisibility, misty step, and the like, to flee from the scene unscathed.

In case the characters catch Felwin, the gnome at­tempts to reason with them. He believes he has done nothing wrong. He never harmed any of his new friends. The characters are the ones who broke into his home and scared, or maybe even harmed those within. Felwin explains he all ever wanted is to have friends. Instead of taking him with the authorities, he offers to travel with the characters so they can keep him in check.

If the clever gnome manages to escape at the last second, he shall remember the characters’ faces and plan his revenge. He shall attack at the least expected moment. Otherwise, Felwin is put behind bars but the meager prison security allows him to escape later on. The characters shall remember who they crossed…

The characters accept Felwin’s terms and welcome him into the party. Felwin is a pedantic, arrogant genius. He won’t think twice about telling someone how stupid they are, or how he could have done things better. The gnome shall soon drive the characters out of their minds. They are supposed to understand why he never had any friends. If the characters didn’t destroy Felwin’s body­guards, he keeps the power stone but never makes use of them unless it benefits him too. Nevertheless, Felwin’s characteristics as an NPC are up to the GM’s discretion. 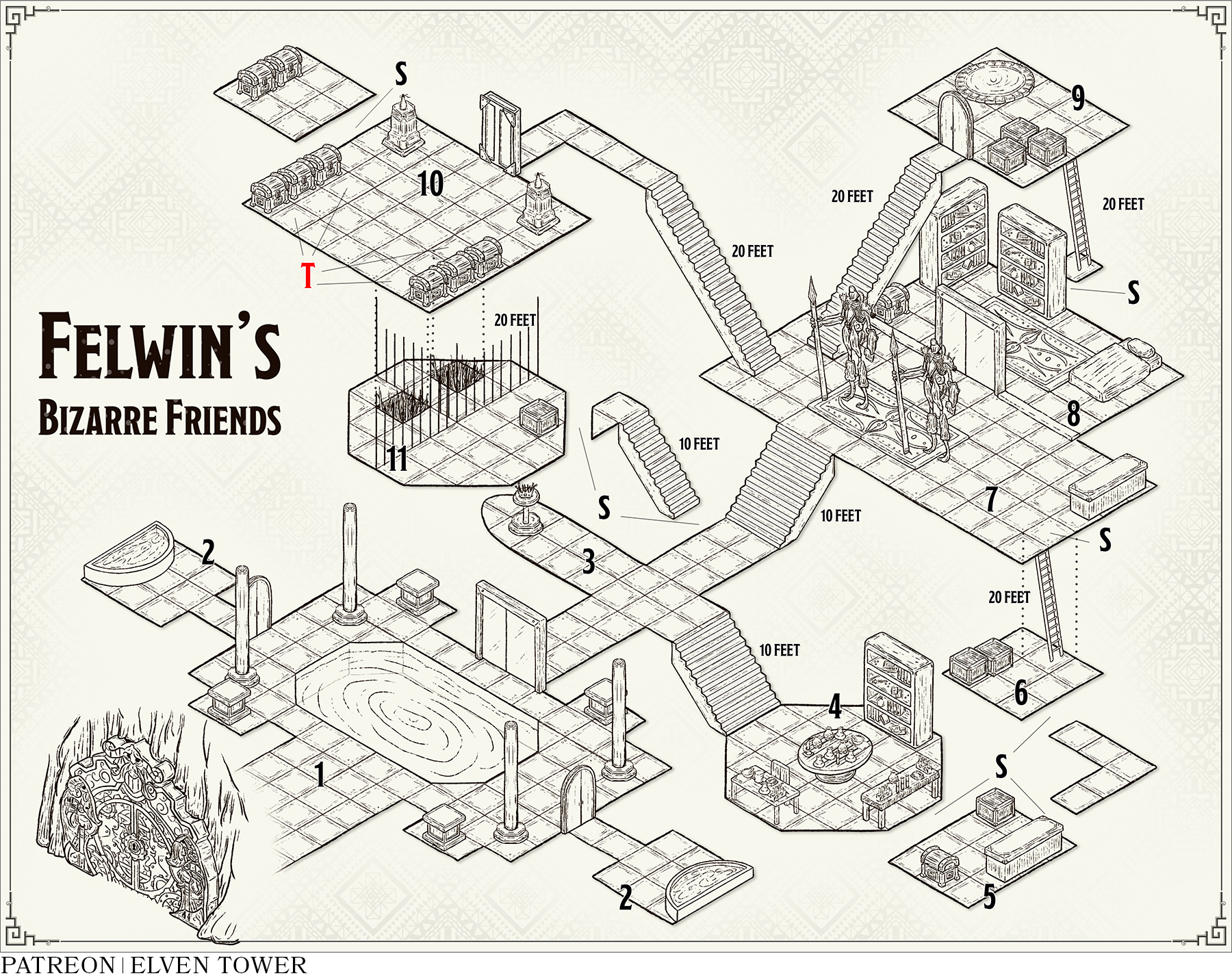