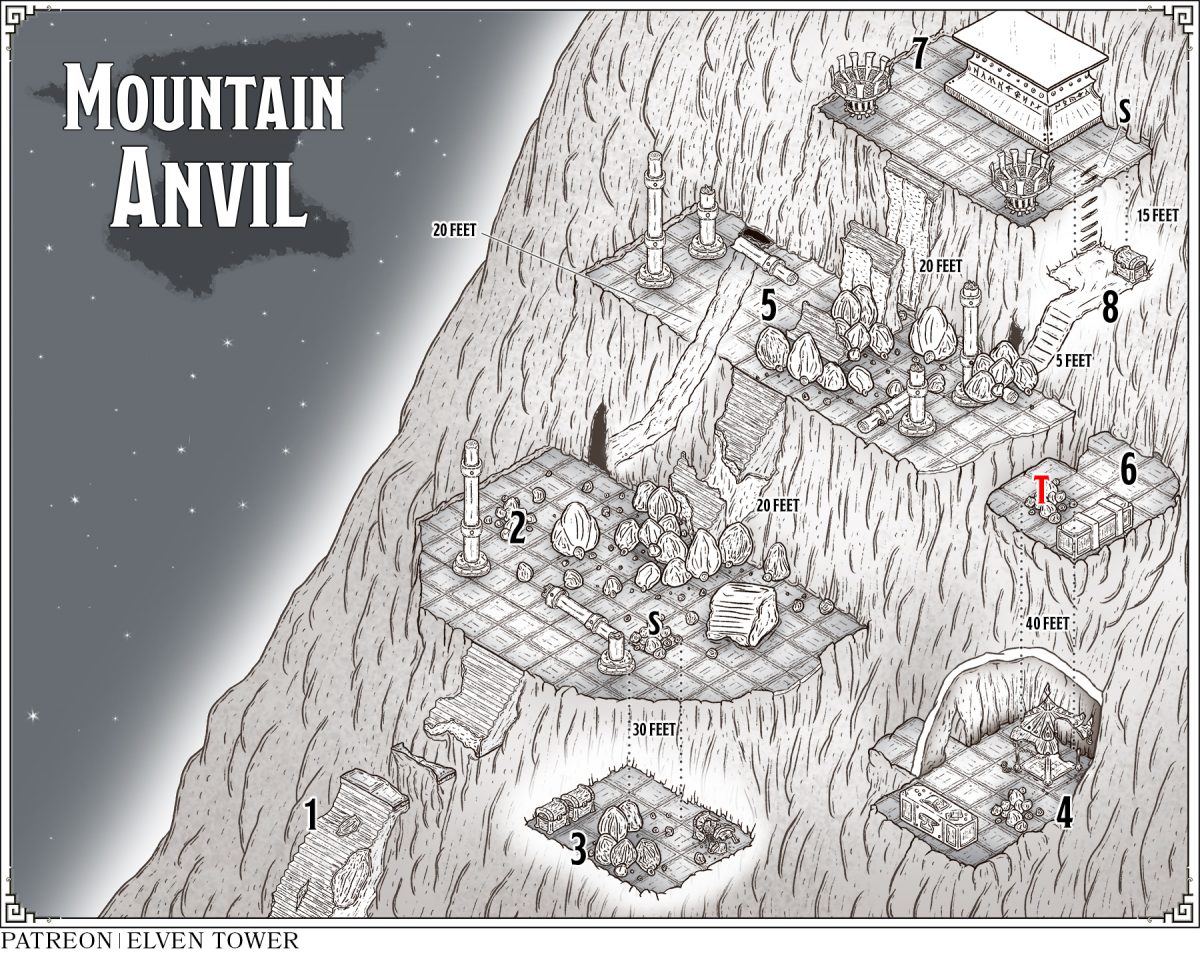 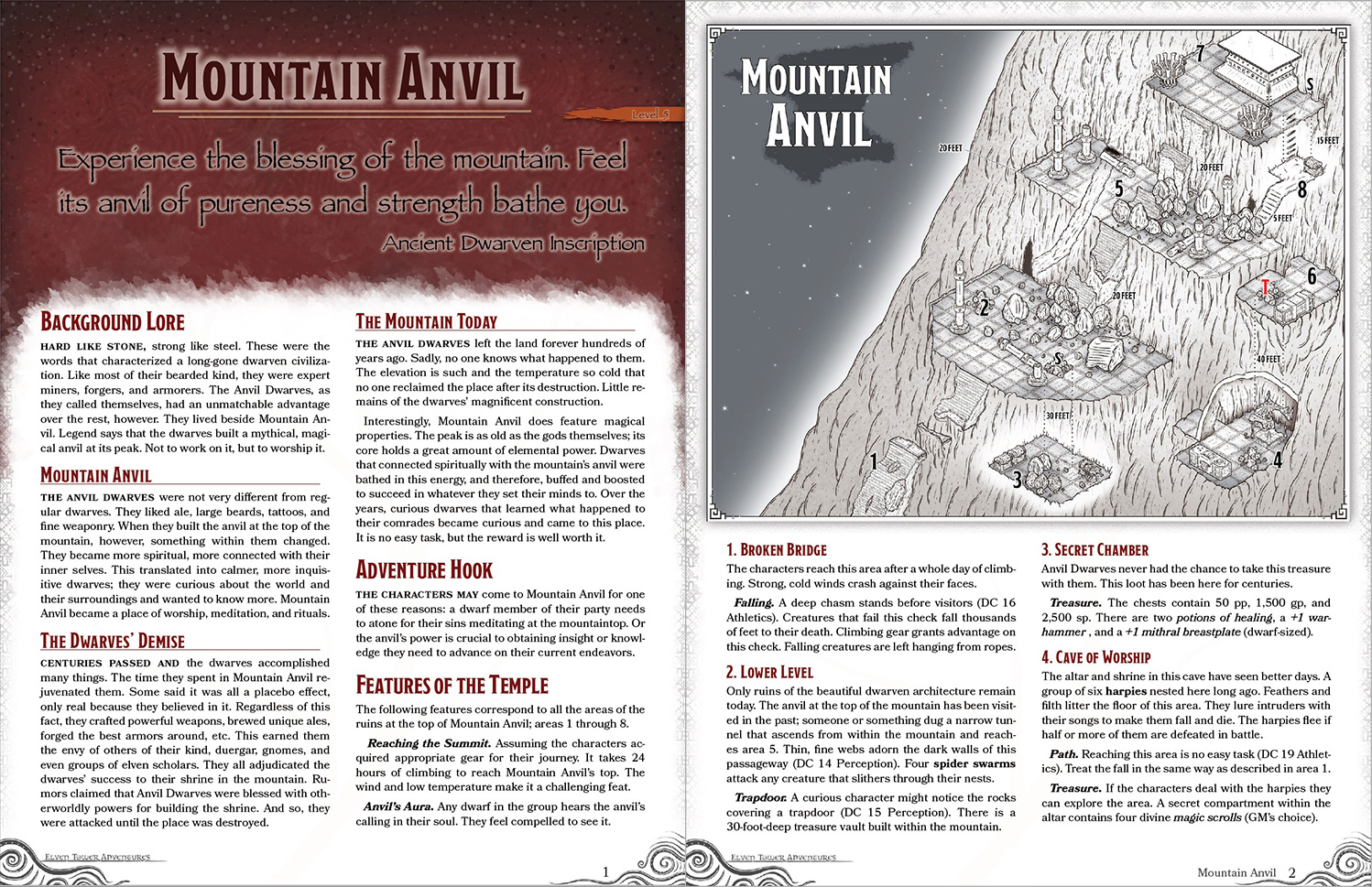 Experience the blessing of the mountain. Feel its anvil of pureness and strength bathe you.

Hard like stone, strong like steel. These were the words that characterized a long-gone dwarven civilization. Like most of their bearded kind, they were expert miners, forgers, and armorers. The Anvil Dwarves, as they called themselves, had an unmatchable advantage over the rest, however. They lived beside Mountain Anvil. Legend says that the dwarves built a mythical, magical anvil at its peak. Not to work on it, but to worship it.

The Anvil Dwarves were not very different from regular dwarves. They liked ale, large beards, tattoos, and fine weaponry. When they built the anvil at the top of the mountain, however, something within them changed. They became more spiritual, more connected with their inner selves. This translated into calmer, more inquisitive dwarves; they were curious about the world and their surroundings and wanted to know more. Mountain Anvil became a place of worship, meditation, and rituals.

Centuries passed and the dwarves accomplished many things. The time they spent in Mountain Anvil rejuvenated them. Some said it was all a placebo effect, only real because they believed in it. Regardless of this fact, they crafted powerful weapons, brewed unique ales, forged the best armors around, etc. This earned them the envy of others of their kind, duergar, gnomes, and even groups of elven scholars. They all adjudicated the dwarves’ success to their shrine in the mountain. Rumors claimed that Anvil Dwarves were blessed with otherworldly powers for building the shrine. And so, they were attacked until the place was destroyed.

The Anvil Dwarves left the land forever hundreds of years ago. Sadly, no one knows what happened to them. The elevation is such and the temperature so cold that no one reclaimed the place after its destruction. Little remains of the dwarves’ magnificent construction.
Interestingly, Mountain Anvil does feature magical properties. The peak is as old as the gods themselves; its core holds a great amount of elemental power. Dwarves that connected spiritually with the mountain’s anvil were bathed in this energy, and therefore, buffed and boosted to succeed in whatever they set their minds to. Over the years, curious dwarves that learned what happened to their comrades became curious and came to this place. It is no easy task, but the reward is well worth it.

The characters may come to Mountain Anvil for one of these reasons: a dwarf member of their party needs to atone for their sins meditating at the mountaintop. Or the anvil’s power is crucial to obtaining insight or knowledge they need to advance on their current endeavors.

The following features correspond to all the areas of the ruins at the top of Mountain Anvil; areas 1 through 8.
Reaching the Summit. Assuming the characters acquired appropriate gear for their journey. It takes 24 hours of climbing to reach Mountain Anvil’s top. The wind and low temperature make it a challenging feat.
Anvil’s Aura. Any dwarf in the group hears the anvil’s calling in their soul. They feel compelled to see it.

The characters reach this area after a whole day of climbing. Strong, cold winds crash against their faces.
Falling. A deep chasm stands before visitors (DC 16 Athletics). Creatures that fail this check fall thousands of feet to their death. Climbing gear grants advantage on this check. Falling creatures are left hanging from ropes.

Only ruins of the beautiful dwarven architecture remain today. The anvil at the top of the mountain has been visited in the past; someone or something dug a narrow tunnel that ascends from within the mountain and reaches area 5. Thin, fine webs adorn the dark walls of this passageway (DC 14 Perception). Four spider swarms attack any creature that slithers through their nests.
Trapdoor. A curious character might notice the rocks covering a trapdoor (DC 15 Perception). There is a 30-foot-deep treasure vault built within the mountain.

Anvil Dwarves never had the chance to take this treasure with them. This loot has been here for centuries.
Treasure. The chests contain 50 pp, 1,500 gp, and 2,500 sp. There are two potions of healing, a +1 warhammer , and a +1 mithral breastplate (dwarf-sized).

The altar and shrine in this cave have seen better days. A group of six harpies nested here long ago. Feathers and filth litter the floor of this area. They lure intruders with their songs to make them fall and die. The harpies flee if half or more of them are defeated in battle.
Path. Reaching this area is no easy task (DC 19 Athletics). Treat the fall in the same way as described in area 1.
Treasure. If the characters deal with the harpies they can explore the area. A secret compartment within the altar contains four divine magic scrolls (GM’s choice).

Just like the broken steps that get here, little is left of the final set of stairs that reach the sacred anvil.

Rocks, rubble, and entire sections of the columns obscure the ground of this level. The eastern section of this level was washed away by rock slides many decades ago.
Secret Passage. A mound of rocks and boulders blocks an opening in the mountain (DC 14 Perception). A well-versed character notices this tunnel was dug about thirty years ago (DC 16 Nature). The dwarves that dug that tunnel are the last people to have come to the anvil.

This section used to be connected with the rest of the middle level. Rock-slides washed away entire chunks of the mountain, damaging both levels.

If the characters manage to get here, they can explore the stone container. A leather-bound tome lies within. This diary belonged to an Anvil Dwarf. An interested character may spend 10 minutes learning their story.
Treasure. A thick layer of dust covers fancy, expensive linens, several sets of high-quality clothes, and a collection of beautiful silverware. The lot is worth 2,000 gp.
Trap. The characters fall 40 feet and land on the wrecked shrine in area 4. They take 4d6 bludgeoning damage if they fail to notice the mound of rocks and pebbles covering the hole on the ground (DC 17 Perception).
Path. Reaching this area requires a jump (DC 17 Athletics). Treat the fall in the same way as described in area 1. However, characters may attempt to grab the edges of areas 2 or 4 in case they fail and have no climbing gear.

Two magnificent braziers with everlasting flames flank the huge anvil. An aura of warmth soothes visitors, in contrast to the cold winds of the summit.

Continual flame spells keep the braziers burning. The flames flicker with the strong winds but never disappear.
Anvil’s Aura. All creatures before the anvil can feel the powerful presence of the mountain’s core. The blessings of the anvil and the ancient dwarven gods are not for the weak. The characters must prove their worth in battle.
Encounter. The anvil summons two dwarf barbarians (berserkers) and four soldiers (knights). They stand their ground with honor and fight to the death. They vanish into thin air when they are dropped to 0 hit points.8. Secret Passage
The characters may reach the anvil using this tunnel. Rough steps and handles on the wall ease the way up.
Treasure. The last visitors meant to return but have not, yet. They stored some valuables in a chest here. There are 500 gp, 1,000 sp, and two potions of healing.

If the characters pass the test, they are allowed to receive the anvil’s blessing. The cleansing power of the ancient gods forgives the sins or mishaps in the soul of a troubled dwarf. A long meditation before the strong steel structure serves to clear the mind and help find a path to follow. Mountain Anvil may aid the characters in other ways. It is up to the GM’s discretion to assess the heroes’ current quests and objectives for this purpose. However, that is an adventure for another day… 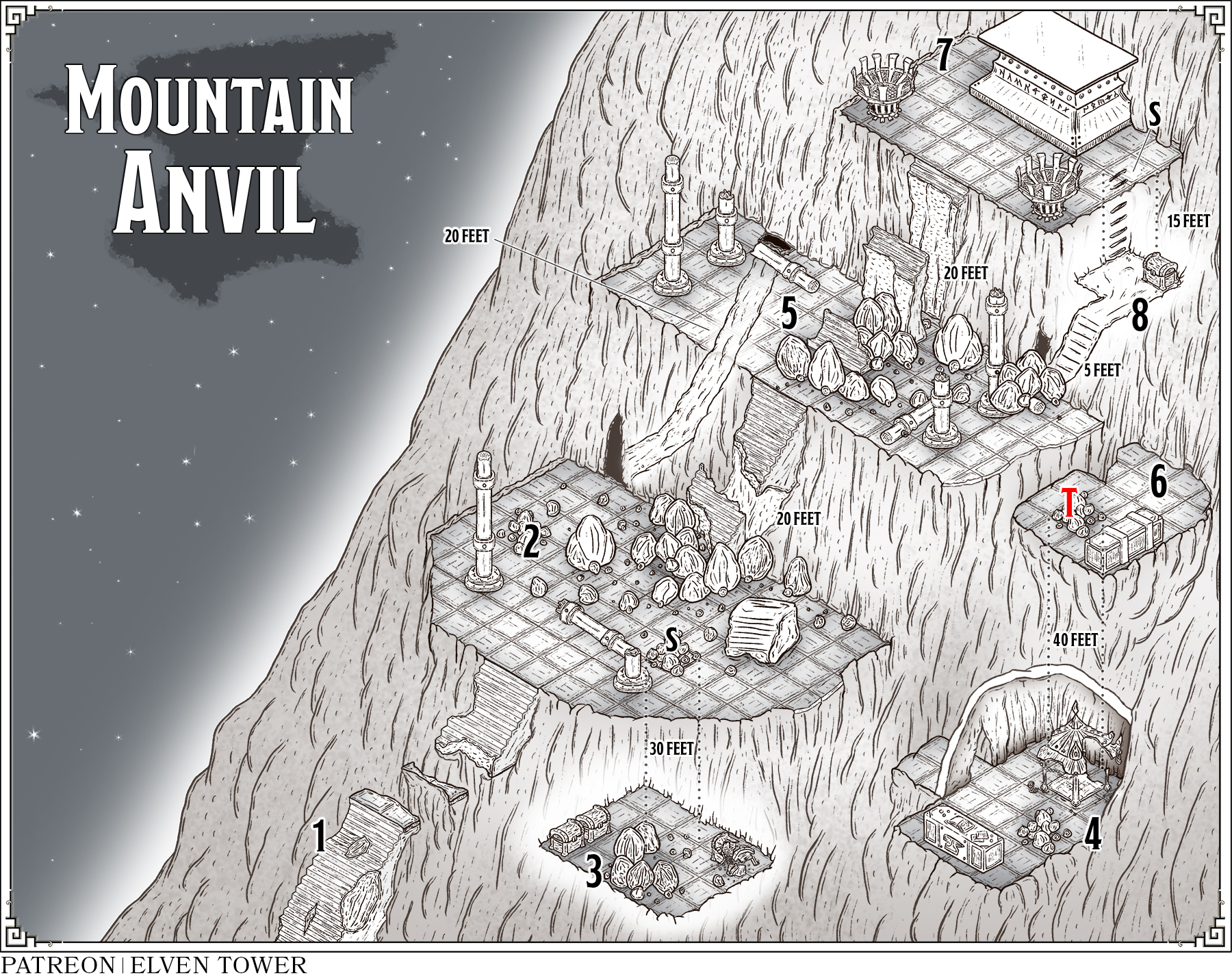