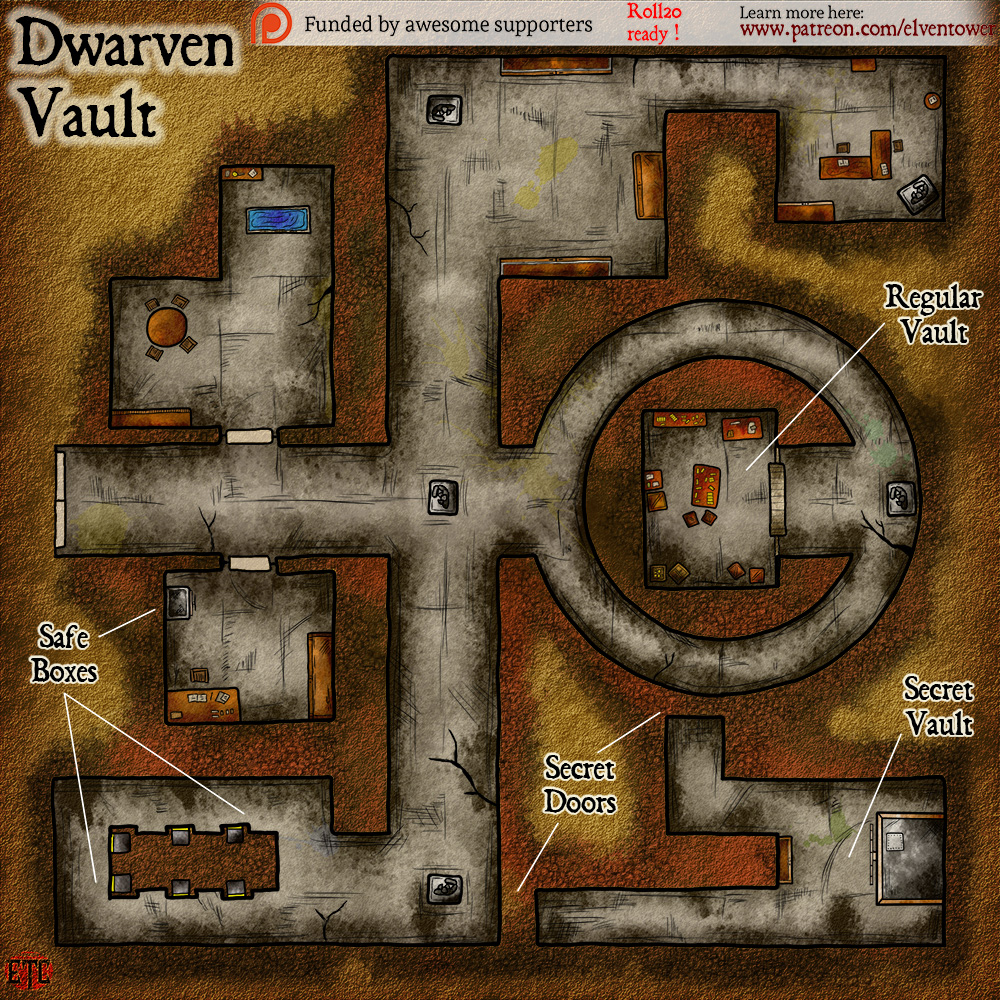 Get the FREE PDF of this map here !

This is a short adventure that can be adapted or modified to fit your setting or current level of play. It’s about a dwarven vault which is hiding something valuable to a group adventurers. It could be just money and wealth, maybe it is a magic item, a forgotten scroll, a family heirloom. Whatever it is, it is very important. Inside this underground complex, there is a vault in the middle of a circular construction (see the map).

This is the regular vault, it is heavily protected. Its door is built from sturdy metal alloys but the real protection is its lock. Built by master dwarfs and gnome tinkerers. The lock uses a series of slides, buttons and levers; when used in the correct combination, the vault door opens. If the wrong combination is used, this is a great place for a trap.

Being as secure as it is, this vault is a decoy. Yes, it holds things of value, but the really valuable things are not here. There is a secret vault that is only accessible through doors hidden in the complex. Two such entrances exist. The main room inside the secret vault is a good place to add another trap. In the main room a 10 ft. tall safe-box is found. The lock in the safe is as complicated as the one on the decoy vault. A person good with locks and mechanical devices might be able to crack the safe by accessing a panel on the top that is normally used for oiling the internal parts. It doesn’t make the cracking any easier however.

As additional protection, dwarf guards are on shift. There are several office areas where dwarves keep the financial books of their patron’s state. Some of them are able fighters and have their weapons close. There are 4 statues throughout the place. They are decorative, but in case you judge appropriate for your game, they can help protect the vaults against trespassers. Choose adequate stats for them; the gargoyle stats are good for lower level parties, while stone golem stats are good for level8+ parties.

How was this map made?

This is a short picture tutorial of how I created this illustration. It goes step by step through my main process of map-making