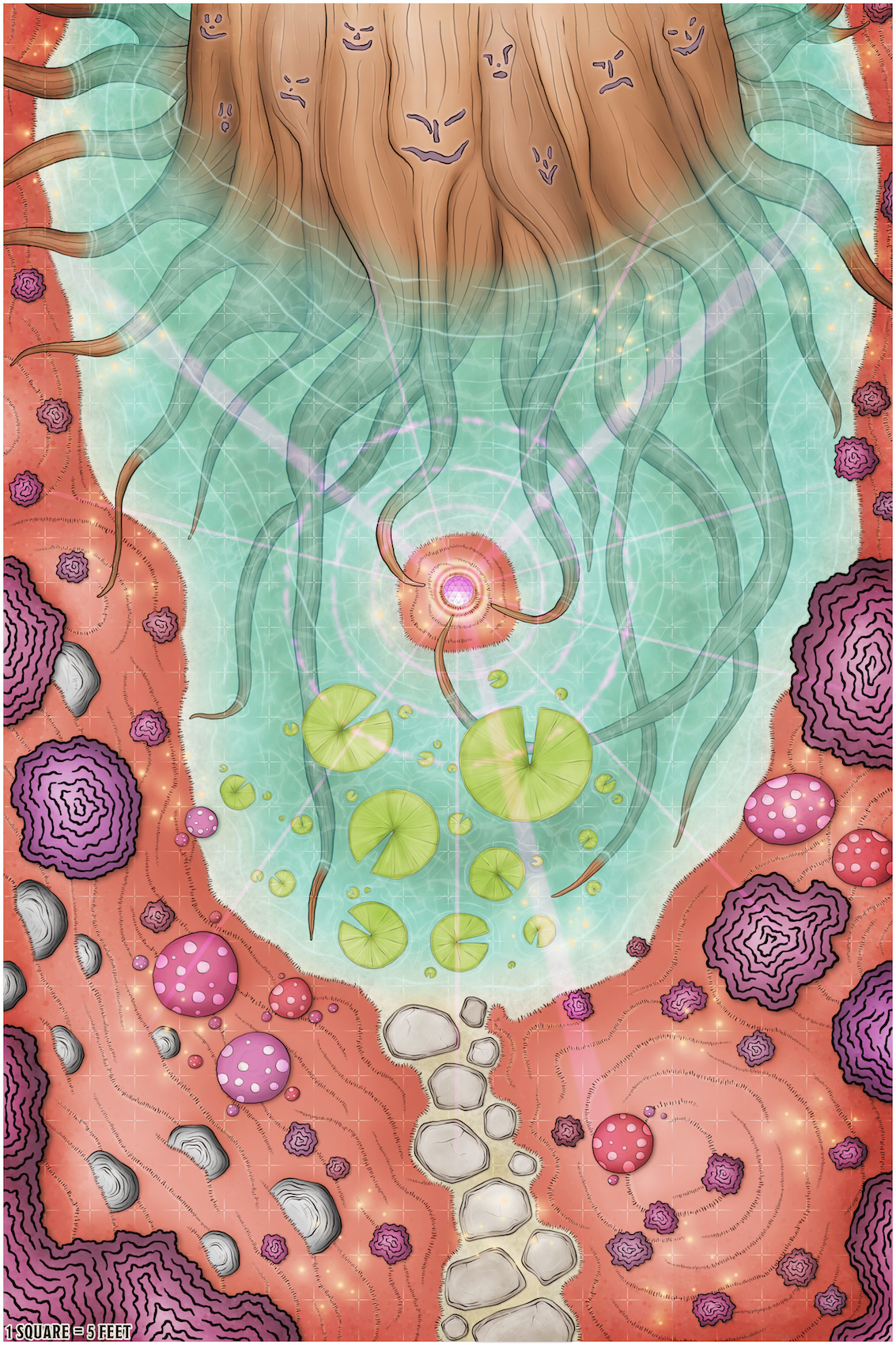 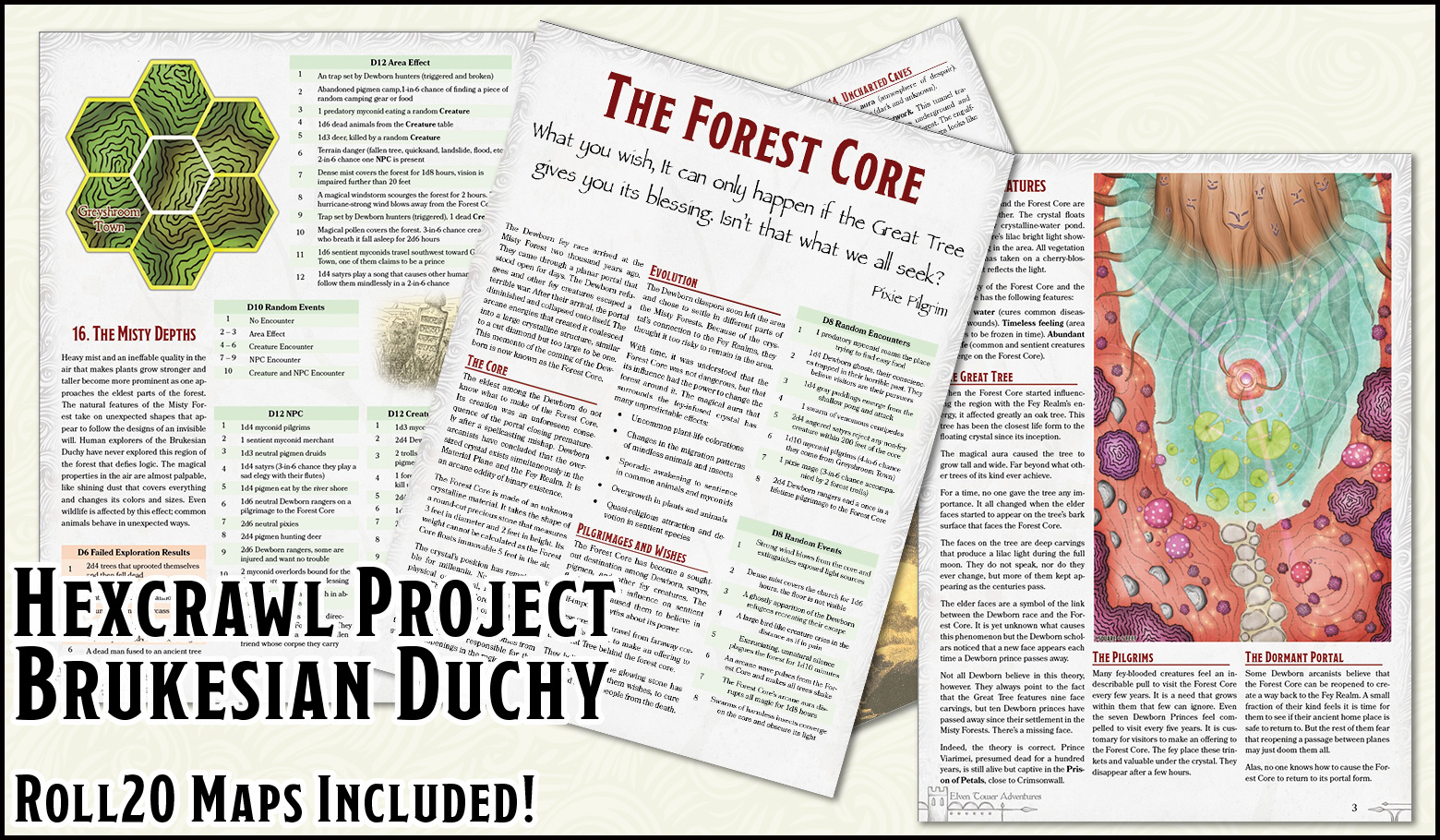 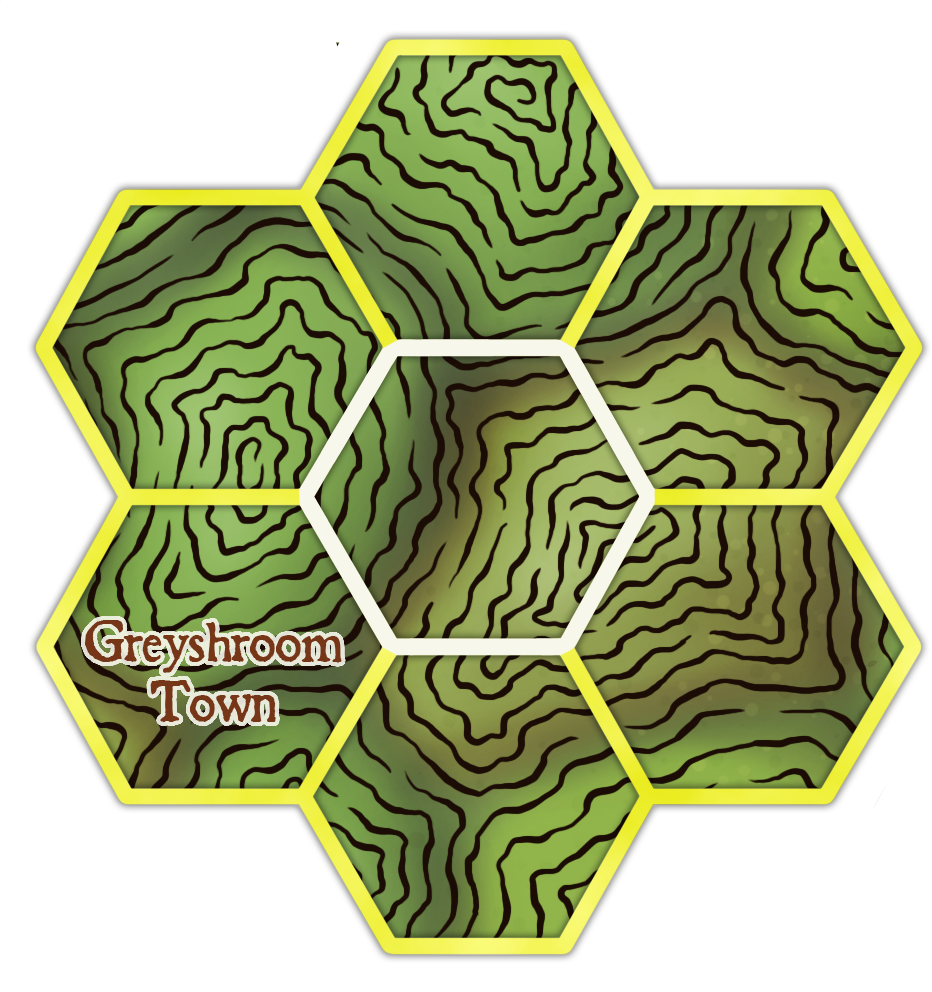 The Dewborn fey race arrived at the Misty Forest two thousand years ago. They came through a planar portal that stood open for days. The Dewborn refugees and other fey creatures escaped a terrible war. After their arrival, the portal diminished and collapsed onto itself. The arcane energies that created it coalesced into a large crystalline structure, similar to a cut diamond but too large to be one. This memento of the coming of the Dewborn is now known as the Forest Core.

The eldest among the Dewborn do not know what to make of the Forest Core. Its creation was an unforeseen consequence of the portal closing prematurely after a spell-casting mishap. Dewborn arcanists have concluded that the oversized crystal exists simultaneously in the Material Plane and the Fey Realm. It is an arcane oddity of binary existence.

The Forest Core is made of an unknown crystalline material. It takes the shape of a round-cut precious stone that measures 3 feet in diameter and 2 feet in height. Its weight cannot be calculated as the Forest Core floats immovable 5 feet in the air.

The crystal’s position has remained stable for millennia. No amount of force, physical or magical, have caused it to move. The Forest Core radiates an arcane aura in the form of invisible waves that change the behavior of life forms in its vicinity. The magical aura comes from the Fey Realm. It is responsible for the strange happenings in the region.

The Dewborn diaspora soon left the area and chose to settle in different parts of the Misty Forests. Because of the crystal’s connection to the Fey Realms, they thought it too risky to remain in the area.

With time, it was understood that the Forest Core was not dangerous, but that its influence had the power to change the forest around it. The magical aura that surrounds the fey-infused crystal has many unpredictable effects:

Changes in the migration patterns of common animals and insects

Sporadic awakening to sentience in common animals and myconids

Overgrowth in plants and animals

The Forest Core has become a sought-out destination among Dewborn, satyrs, pigmen, and other fey creatures. The floating crystal’s influence on sentient species has caused them to believe in self-imposed myths about its power.

These creatures travel from faraway corners of the forest to make an offering to the Great Tree behind the forest core.

They believe that the glowing stone can grant them wishes, cure the ill, or even bring people from the death.

The Great Tree and the Forest Core opposite to each another. The crystal floats over a shallow crystalline-water pond. The Forest Core’s lilac bright light showers everything in the area. All vegetation in the area has taken on a cherry-blossom tint that reflects the light.

The vicinity of the Forest Core and the Great Tree has the following features:

When the Forest Core started influencing the region with the Fey Realm’s energy, it affected an oak tree greatly. This tree has been the closest life form to the floating crystal since its inception.

The magical aura caused the tree to grow tall and wide. Far beyond what other trees of its kind ever reach.

For a time, no one gave the tree any importance. It all changed when the elder faces started to appear on the tree’s bark surface that faces the Forest Core.

The faces on the tree are deep carvings that produce a lilac light during the full moon. They do not speak, nor do they ever change, but more of them kept appearing as the centuries passed.

The elder faces are a symbol of the link between the Dewborn race and the Forest Core. It is yet unknown what causes this phenomenon but the Dewborn scholars noticed that a new face appears each time a Dewborn prince passes away.

Not all Dewborn believe in this theory, however. They always point to the fact that the Great Tree features nine face carvings, but ten Dewborn princes have passed away since their settlement in the Misty Forests. There’s a missing face.

However, the theory is correct. Prince Viarimei, presumed dead for a hundred years, is still alive but captive in the Prison of Petals, close to Crimsonwall.

Many fey-blooded creatures feel an indescribable pull to visit the Forest Core every few years. It is a need that grows within them that few can ignore. Even the seven Dewborn Princes feel compelled to visit every five years. It is customary for visitors to make an offering to the Forest Core. The fey place these trinkets and valuables under the crystal. They disappear after a few hours.

Some Dewborn arcanists believe that the Forest Core can be reopened to create a way back to the Fey Realm. A small fraction of their kind feels it is time for them to see if their ancient home place is safe to return to. But the rest of them fear that reopening a passage between planes may just doom them all.

Alas, no one knows how to cause the Forest Core to return to its portal form.