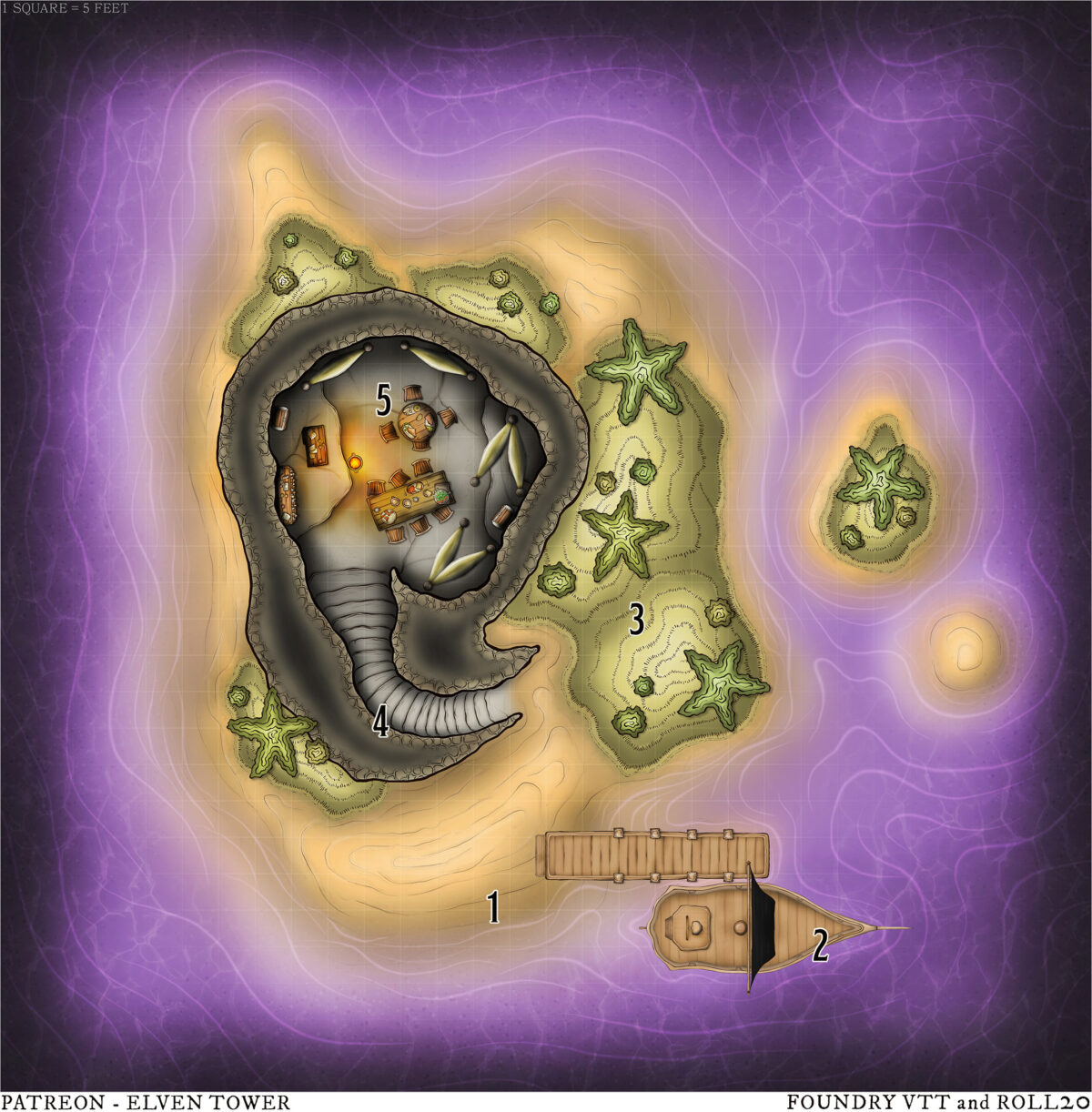 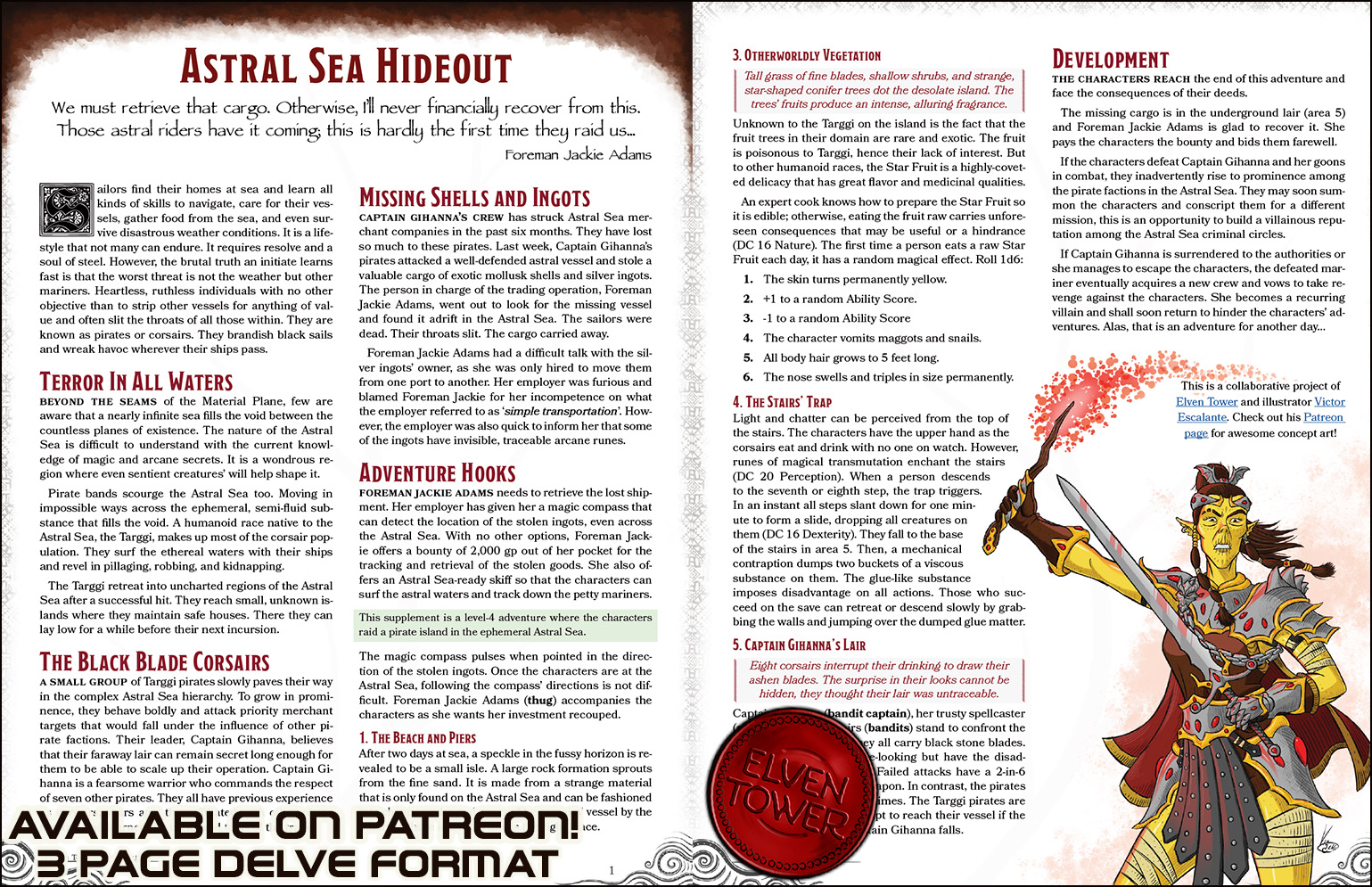 We must retrieve that cargo. Otherwise, I’ll never financially recover from this. Those astral riders have it coming; this is hardly the first time they raid us…

Sailors find their homes at sea and learn all kinds of skills to navigate, care for their ves­sels, gather food from the sea, and even sur­vive disastrous weather conditions. It is a life­style that not many can endure. It requires resolve and a soul of steel. However, the brutal truth an initiate learns fast is that the worst threat is not the weather but other mariners. Heartless, ruthless individuals with no other objective than to strip other vessels for anything of val­ue and often slit the throats of all those within. They are known as pirates or corsairs. They brandish black sails and wreak havoc wherever their ships pass.

Terror In All Waters

Beyond the seams of the Material Plane, few are aware that a nearly infinite sea fills the void between the countless planes of existence. The nature of the Astral Sea is difficult to understand with the current knowl­edge of magic and arcane secrets. It is a wondrous re­gion where even sentient creatures’ will help shape it.

Pirate bands scourge the Astral Sea too. Moving in impossible ways across the ephemeral, semi-fluid sub­stance that fills the void. A humanoid race native to the Astral Sea, the Targgi, makes up most of the corsair pop­ulation. They surf the ethereal waters with their ships and revel in pillaging, robbing, and kidnapping.

The Targgi retreat into uncharted regions of the Astral Sea after a successful hit. They reach small, unknown is­lands where they maintain safe houses. There they can lay low for a while before their next incursion.

A small group of Targgi pirates slowly paves their way in the complex Astral Sea hierarchy. To grow in promi­nence, they behave boldly and attack priority merchant targets that would fall under the influence of other pi­rate factions. Their leader, Captain Gihanna, believes that their faraway lair can remain secret long enough for them to be able to scale up their operation. Captain Gi­hanna is a fearsome warrior who commands the respect of seven other pirates. They all have previous experience as corsairs; years ago, they affiliated with other pirate factions and learned the tricks and tools of the trade.

Captain Gihanna’s crew has struck Astral Sea mer­chant companies in the past six months. They have lost so much to these pirates. Last week, Captain Gihanna’s pirates attacked a well-defended astral vessel and stole a valuable cargo of exotic mollusk shells and silver ingots. The person in charge of the trading operation, Foreman Jackie Adams, went out to look for the missing vessel and found it adrift in the Astral Sea. The sailors were dead. Their throats slit. The cargo carried away.

Foreman Jackie Adams had a difficult talk with the sil­ver ingots’ owner, as she was only hired to move them from one port to another. Her employer was furious and blamed Foreman Jackie for her incompetence on what the employer referred to as ‘simple transportation’. How­ever, the employer was also quick to inform her that some of the ingots have invisible, traceable arcane runes.

Foreman Jackie Adams needs to retrieve the lost ship­ment. Her employer has given her a magic compass that can detect the location of the stolen ingots, even across the Astral Sea. With no other options, Foreman Jack­ie offers a bounty of 2,000 gp out of her pocket for the tracking and retrieval of the stolen goods. She also of­fers an Astral Sea-ready skiff so that the characters can surf the astral waters and track down the petty mariners.

This supplement is a level-4 adventure where the characters raid a pirate island in the ephemeral Astral Sea.

The magic compass pulses when pointed in the direc­tion of the stolen ingots. Once the characters are at the Astral Sea, following the compass’ directions is not dif­ficult. Foreman Jackie Adams (thug) accompanies the characters as she wants her investment recouped.

1. The Beach and Piers

After two days at sea, a speckle in the fussy horizon is re­vealed to be a small isle. A large rock formation sprouts from the fine sand. It is made from a strange material that is only found on the Astral Sea and can be fashioned into cheap jewelry and armor. The corsairs’ vessel by the ethereal shore indicates this is the right place.

A 30-foot-long ship awaits by the wooden pier. The pi­rate black sail is currently tied up to the upper mast.

There is no sign of the Targgi corsairs on the beach.

A wooden strip on the vessel’s side reads ‘The Black Blade’ in Targgi. Well-informed individuals know that this particular pirate band brandishes knives and ar­mors made from the black rock that dominates the is­land (DC 18 History). Upon inspection, the ship’s upper deck contains nothing of value as the shipment crates have already been moved off to the underground lair.

A trapdoor under the sail leads to the lower deck. It is dark, unkempt, and pestilent. The chamber contains sev­eral wooden crates with iron locks; all empty. Eight ham­mocks hang from the ship’s beams and mast.

Two bound, human sailors shield their eyes from the light when the characters arrive. They work for Foreman Jackie but were presumed dead. The poor sailors, Carl and Darella (scouts), are weak and dehydrated from the crude conditions of imprisonment they endured. If healed and offered something to eat and drink, they glad­ly join the characters on their retrieval mission.

Unknown to the Targgi on the island is the fact that the fruit trees in their domain are rare and exotic. The fruit is poisonous to Targgi, hence their lack of interest. But to other humanoid races, the Star Fruit is a highly-covet­ed delicacy that has great flavor and medicinal qualities.

An expert cook knows how to prepare the Star Fruit so it is edible; otherwise, eating the fruit raw carries unfore­seen consequences that may be useful or a hindrance (DC 16 Nature). The first time a person eats a raw Star Fruit each day, it has a random magical effect. Roll 1d6:

Light and chatter can be perceived from the top of the stairs. The characters have the upper hand as the corsairs eat and drink with no one on watch. However, runes of magical transmutation enchant the stairs (DC 20 Perception). When a person descends to the seventh or eighth step, the trap triggers. In an instant all steps slant down for one min­ute to form a slide, dropping all creatures on them (DC 16 Dexterity). They fall to the base of the stairs in area 5. Then, a mechanical contraption dumps two buckets of a viscous substance on them. The glue-like substance imposes disadvantage on all actions. Those who suc­ceed on the save can retreat or descend slowly by grab­bing the walls and jumping over the dumped glue matter.

Eight corsairs interrupt their drinking to draw their ashen blades. The surprise in their looks cannot be hidden, they thought their lair was untraceable.

Captain Gihanna (bandit captain), her trusty spellcaster (priest), and six corsairs (bandits) stand to confront the untimely trespassers. They all carry black stone blades. They are sharp and crude-looking but have the disad­vantage of being too frail. Failed attacks have a 2-in-6 chance of sundering the weapon. In contrast, the pirates carry a second blade at all times. The Targgi pirates are trapped but they still attempt to reach their vessel if the battle turns sour or if Captain Gihanna falls.

The missing cargo is in the underground lair (area 5) and Foreman Jackie Adams is glad to recover it. She pays the characters the bounty and bids them farewell.

If the characters defeat Captain Gihanna and her goons in combat, they inadvertently rise to prominence among the pirate factions in the Astral Sea. They may soon sum­mon the characters and conscript them for a different mission, this is an opportunity to build a villainous repu­tation among the Astral Sea criminal circles.

If Captain Gihanna is surrendered to the authorities or she manages to escape the characters, the defeated mar­iner eventually acquires a new crew and vows to take re­venge against the characters. She becomes a recurring villain and shall soon return to hinder the characters’ ad­ventures. Alas, that is an adventure for another day… 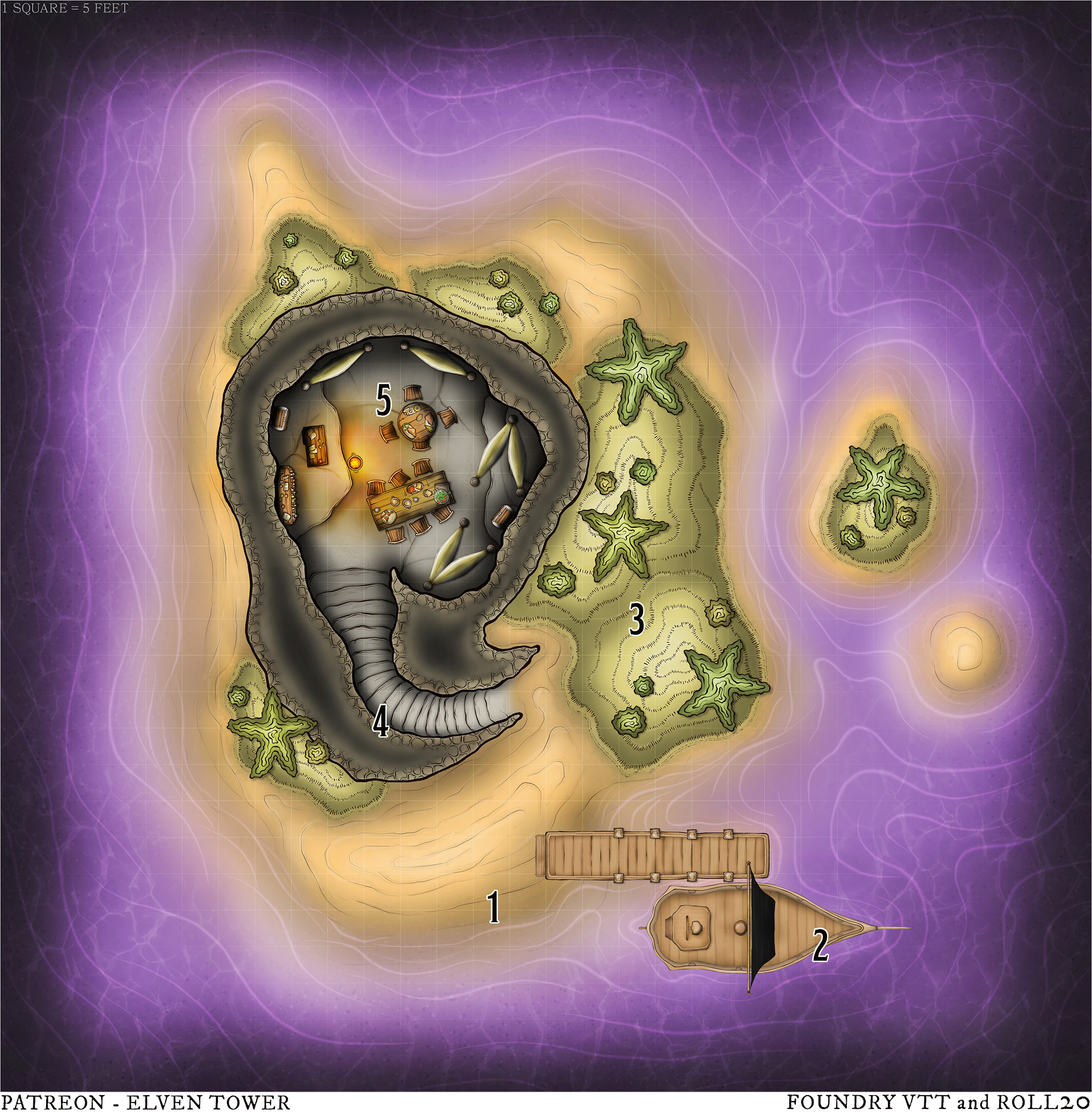