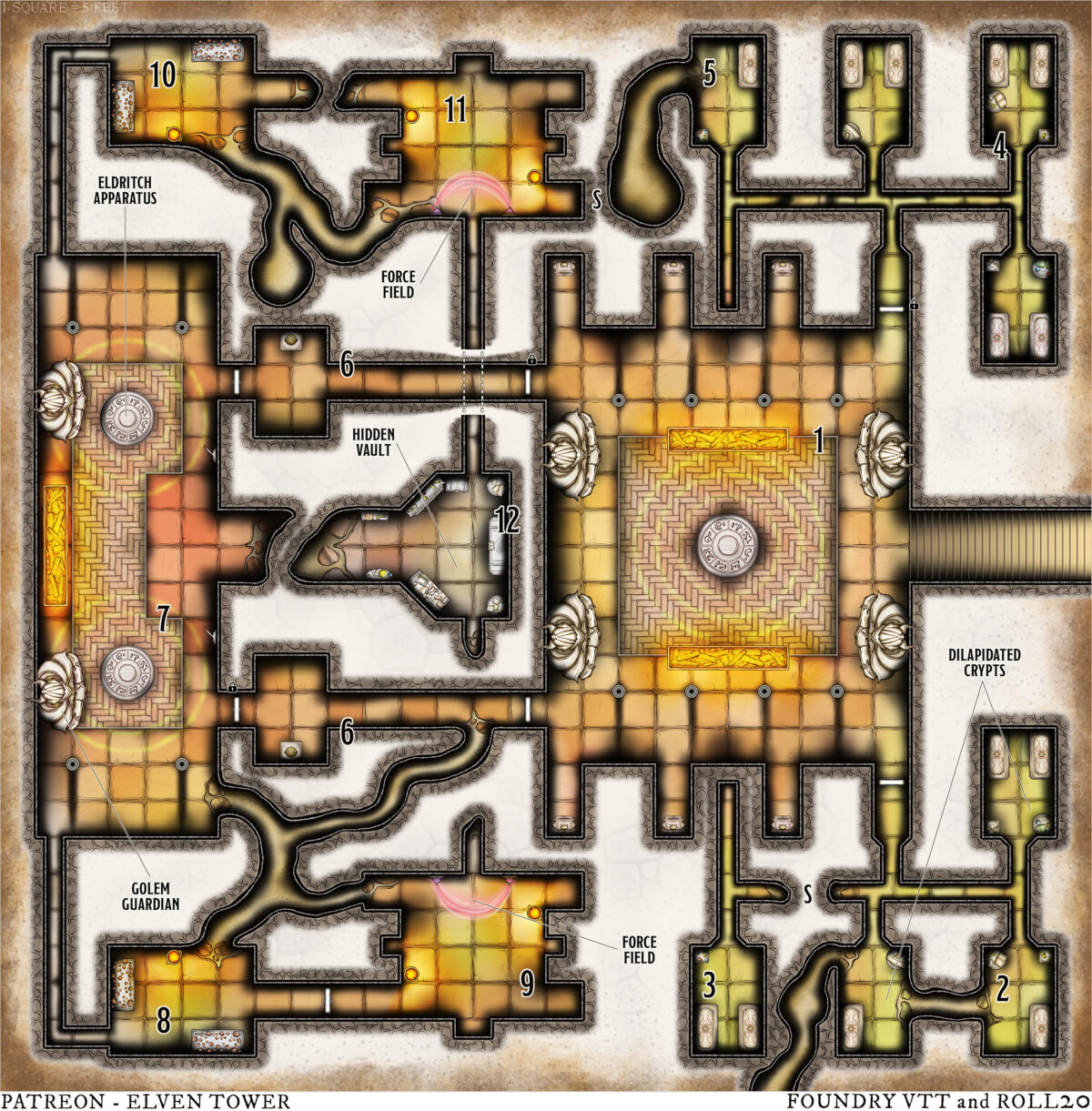 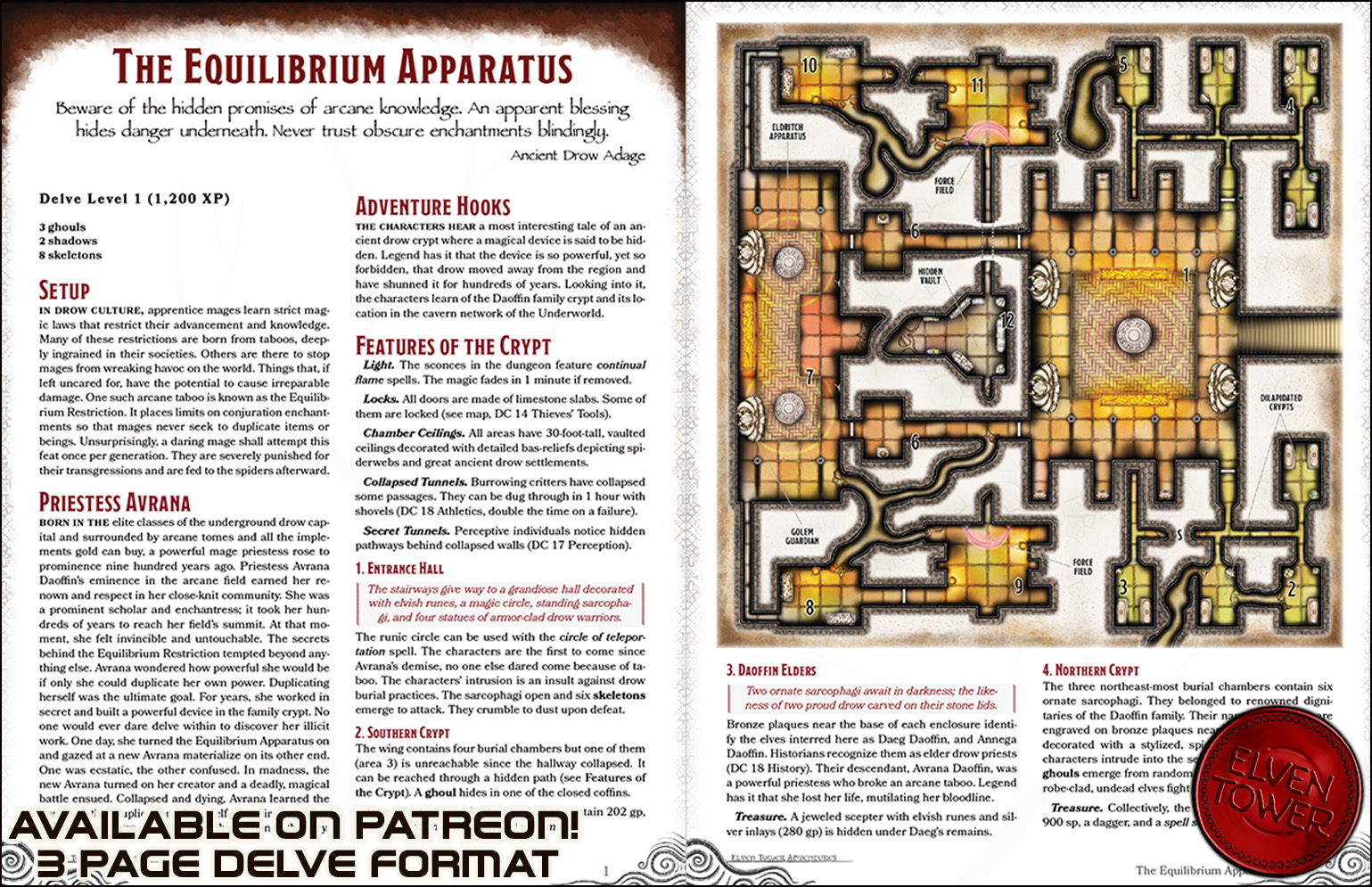 In drow culture, apprentice mages learn strict mag­ic laws that restrict their advancement and knowledge. Many of these restrictions are born from taboos, deep­ly ingrained in their societies. Others are there to stop mages from wreaking havoc on the world. Things that, if left uncared for, have the potential to cause irreparable damage. One such arcane taboo is known as the Equilib­rium Restriction. It places limits on conjuration enchant­ments so that mages never seek to duplicate items or beings. Unsurprisingly, a daring mage shall attempt this feat once per generation. They are severely punished for their transgressions and are fed to the spiders afterward.

Born in the elite classes of the underground drow cap­ital and surrounded by arcane tomes and all the imple­ments gold can buy, a powerful mage priestess rose to prominence nine hundred years ago. Priestess Avrana Daoffin’s eminence in the arcane field earned her re­nown and respect in her close-knit community. She was a prominent scholar and enchantress; it took her hun­dreds of years to reach her field’s summit. At that mo­ment, she felt invincible and untouchable. The secrets behind the Equilibrium Restriction tempted beyond any­thing else. Avrana wondered how powerful she would be if only she could duplicate her own power. Duplicating herself was the ultimate goal. For years, she worked in secret and built a powerful device in the family crypt. No one would ever dare delve within to discover her illicit work. One day, she turned the Equilibrium Apparatus on and gazed at a new Avrana materialize on its other end. One was ecstatic, the other confused. In madness, the new Avrana turned on her creator and a deadly, magical battle ensued. Collapsed and dying, Avrana learned the hard way that duplication of the self is a ruinous propo­sition. Both mages perished from their wounds that day.

The characters hear a most interesting tale of an an­cient drow crypt where a magical device is said to be hid­den. Legend has it that the device is so powerful, yet so forbidden, that drow moved away from the region and have shunned it for hundreds of years. Looking into it, the characters learn of the Daoffin family crypt and its lo­cation in the cavern network of the Underworld.

Light. The sconces in the dungeon feature continual flame spells. The magic fades in 1 minute if removed.

Locks. All doors are made of limestone slabs. Some of them are locked (see map, DC 14 Thieves’ Tools).

Collapsed Tunnels. Burrowing critters have collapsed some passages. They can be dug through in 1 hour with shovels (DC 18 Athletics, double the time on a failure).

The stairways give way to a grandiose hall decorated with elvish runes, a magic circle, standing sarcopha­gi, and four statues of armor-clad drow warriors.

The runic circle can be used with the circle of telepor­tation spell. The characters are the first to come since Avrana’s demise, no one else dared come because of ta­boo. The characters’ intrusion is an insult against drow burial practices. The sarcophagi open and six skeletons emerge to attack. They crumble to dust upon defeat.

The wing contains four burial chambers but one of them (area 3) is unreachable since the hallway collapsed. It can be reached through a hidden path (see Features of the Crypt). A ghoul hides in one of the closed coffins.

Bronze plaques near the base of each enclosure identi­fy the elves interred here as Daeg Daoffin, and Annega Daoffin. Historians recognize them as elder drow priests (DC 18 History). Their descendant, Avrana Daoffin, was a powerful priestess who broke an arcane taboo. Legend has it that she lost her life, mutilating her bloodline.

Treasure. A jeweled scepter with elvish runes and sil­ver inlays (280 gp) is hidden under Daeg’s remains.

The three northeast-most burial chambers contain six ornate sarcophagi. They belonged to renowned digni­taries of the Daoffin family. Their names and ranks are engraved on bronze plaques near the floor. Each lid is decorated with a stylized, spider-like sigil. When the characters intrude into the second burial chamber, two ghouls emerge from random sarcophagi. The ravenous, robe-clad, undead elves fight until slain.

Treasure. Collectively, the enclosures contain 24 gp, 900 sp, a dagger, and a spell scroll of magic missile.

A section of the wall in this chamber has collapsed. The edges are burned as if acid had corroded them.

The cave-in leads to an irregular cavern chamber that can be used to access area 11 (see map). A naturalist concludes that the melted wall section was destroyed by hundreds of acidic centipedes; a type of vermin common in the Underworld (DC 16 Nature). The insect swarm appears to have left the crypt after finding nothing to eat.

The long hallway leads to a small antechamber. The stone doors are marked with a slithering, green-hued elvish rune. It glows rhythmically, like a beating heart.

Characters that speak Elvish identify the rune as an old form of the word ‘Replication’. Historians recall an old rumor in drow societies about the prohibition to use magic to replicate objects or living beings (DC 18 Histo­ry). The vase near the door contains a single dose of dust of disappearance. More dust is regenerated at dawn.

The bones belong to Avrana Daoffin and her duplicate. The eldritch apparatus that permits duplication magic is hidden underneath the stone disks. A spellcaster that knows Elvish can decipher the Equilibrium Apparatus’ functioning with 10 minutes of study. The runes reveal that placing anything in the south circle shall be replicat­ed in the north circle when the device is activated.

Pulling the two levers on the east wall activates the Equilibrium Apparatus. It can only be used once per week as its arcane batteries take that long to charge. When the characters enter this chamber the two skel­etons and two shadows rise to attack them mercilessly.

The walls of this chamber house dozens of drawer-like niches where the ashen remains of members of the Daof­fin family lie. A glowing candle burns for each of them. Elvish characters can pay their respects by kneeling and praying here as expected in traditional elvish cus­toms. Doing so earns the gratitude of some of the spir­its, awarding them 1 spell slot or healing 1d10 hit points.

This chamber is a mirrored version of area 8. In the same manner, an elvish character can pay their respects to the elf elders and gain a similar benefit.

This chamber is identical to chamber 9 except that the narrow hallway beyond the force field is not collapsed and can be used to reach area 12. In addition, after oper­ating the Equilibrium Apparatus in area 7, its workings overload the force field generators. The force field disap­pears for six hours before reappearing once more.

The chamber contains stone chests, plinths, and book­shelves. The Daoffin family crest is carved on the wall.

Protective Measures. A silent alarm is set up to noti­fy living members of the drow priesthood. A permanent arcane eye in the room is used to identify the characters and see if the Daoffin hoard is shamelessly plundered.

After defeating the undead abominations, the characters gain access to the arcane device Avrana left behind. It can replicate any object, even magical items. It can also create a duplicate version of any living being. It is a pow­erful artifact but it can only be used once per week. It works without issue unless a sentient being is replicat­ed. Following ancient drow lore, the replication of sen­tient beings creates an overwhelming paradox in their minds. The bodies are separated but the minds are not. The resulting confusion often ends in a deadly clash or a descent into insanity. Should the characters attempt such a deranged idea, they shall soon meet a grim fate.

The characters’ visit to the vault doesn’t go unnoticed. The priests are aware of Avrana’s creation and regard it with hate and fear. The characters’ presence in the crypt presents a terrible danger of breaking the Equilibrium Restriction. The state of alert is heightened if elves are part of the group. The priests are far away but they shall soon track down the characters and bring forth their re­venge. Alas, that is an adventure for another day… 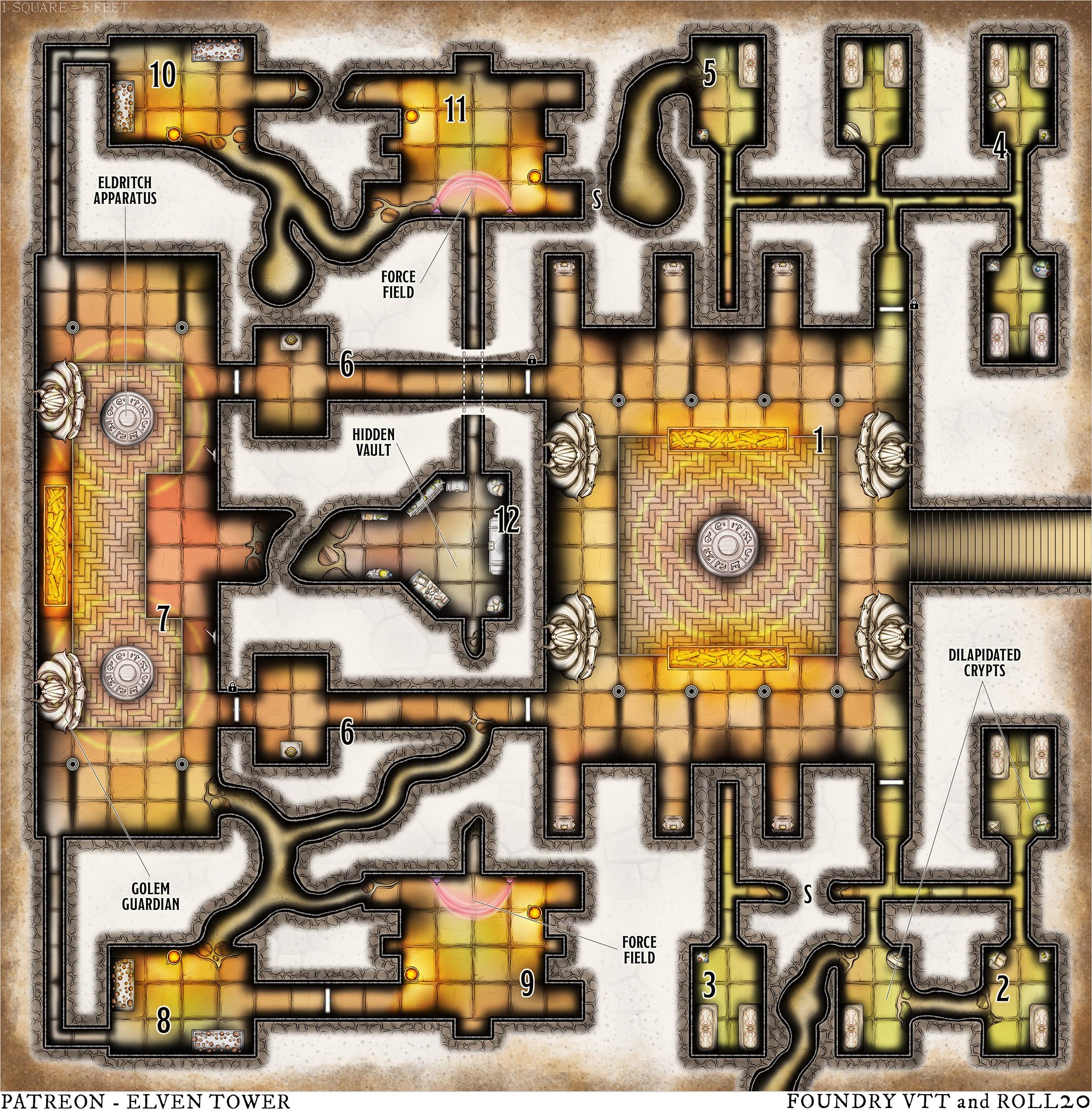