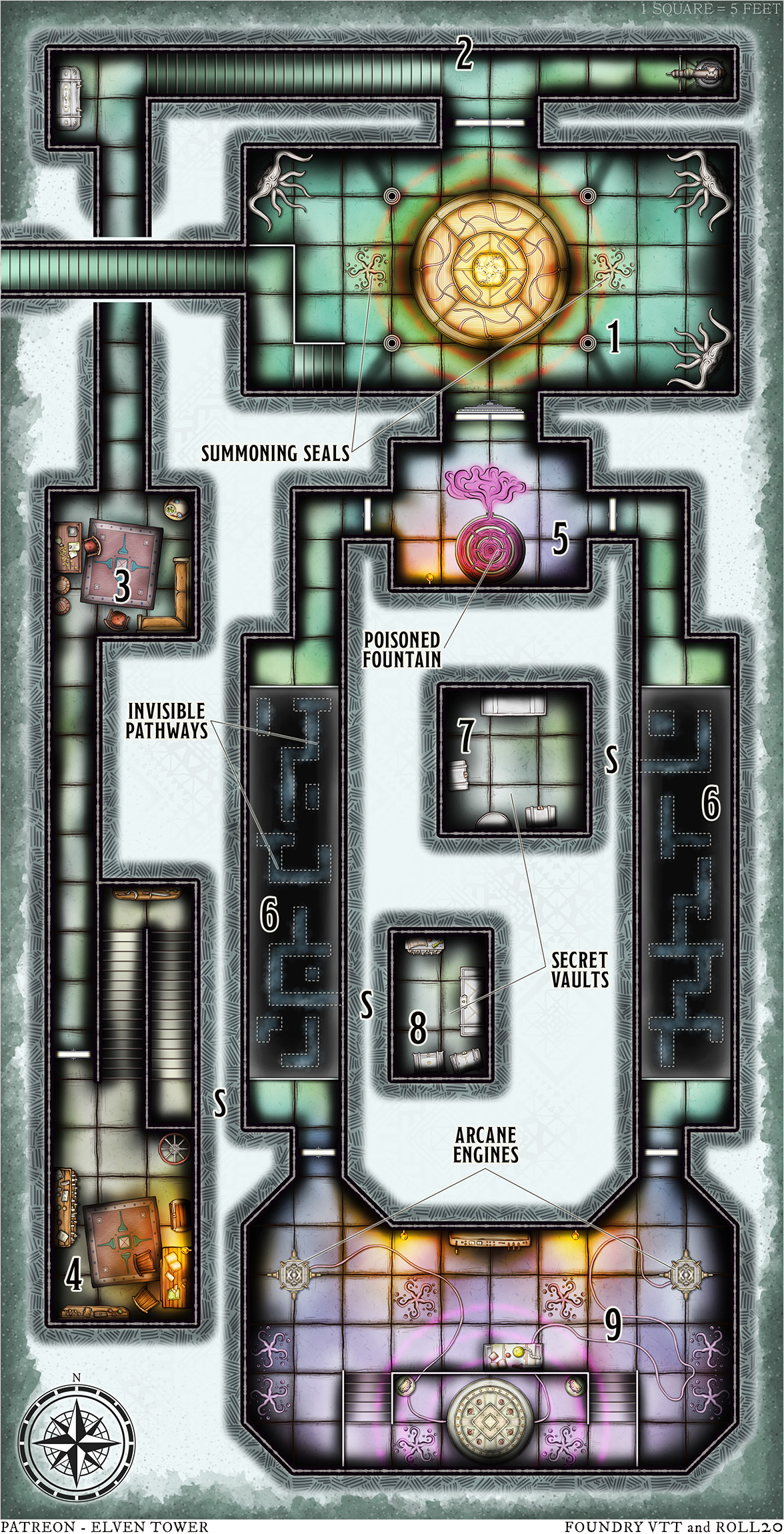 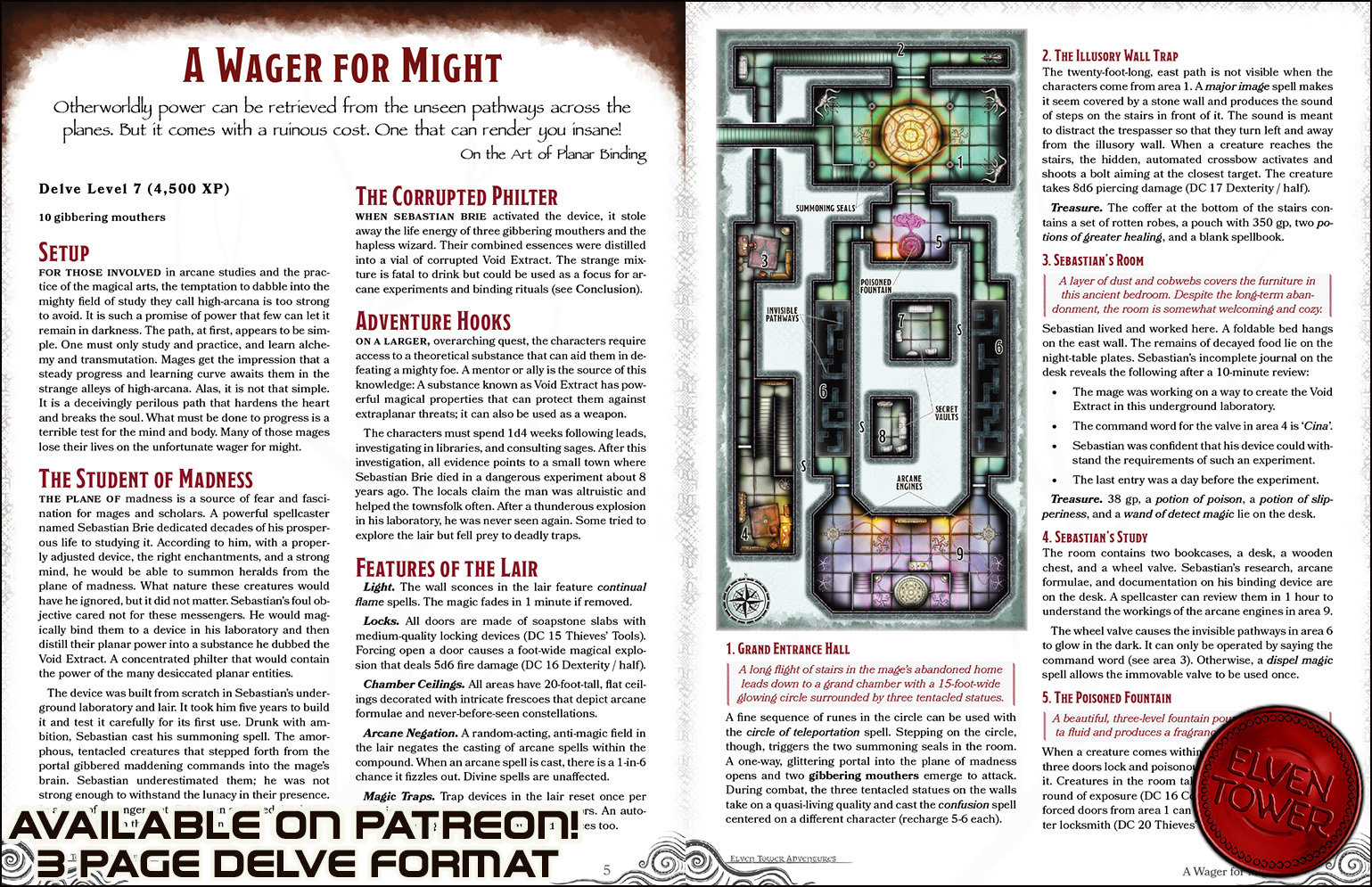 Otherworldly power can be retrieved from the unseen pathways across the planes. But it comes with a ruinous cost. One that can render you insane!

On the Art of Planar Binding

For those involved in arcane studies and the prac­tice of the magical arts, the temptation to dabble into the mighty field of study they call high-arcana is too strong to avoid. It is such a promise of power that few can let it remain in darkness. The path, at first, appears to be sim­ple. One must only study and practice, and learn alche­my and transmutation. Mages get the impression that a steady progress and learning curve awaits them in the strange alleys of high-arcana. Alas, it is not that simple. It is a deceivingly perilous path that hardens the heart and breaks the soul. What must be done to progress is a terrible test for the mind and body. Many of those mages lose their lives on the unfortunate wager for might.

The Student of Madness

The plane of madness is a source of fear and fasci­nation for mages and scholars. A powerful spellcaster named Sebastian Brie dedicated decades of his prosper­ous life to studying it. According to him, with a proper­ly adjusted device, the right enchantments, and a strong mind, he would be able to summon heralds from the plane of madness. What nature these creatures would have he ignored, but it did not matter. Sebastian’s foul ob­jective cared not for these messengers. He would mag­ically bind them to a device in his laboratory and then distill their planar power into a substance he dubbed the Void Extract. A concentrated philter that would contain the power of the many desiccated planar entities.

The device was built from scratch in Sebastian’s under­ground laboratory and lair. It took him five years to build it and test it carefully for its first use. Drunk with am­bition, Sebastian cast his summoning spell. The amor­phous, tentacled creatures that stepped forth from the portal gibbered maddening commands into the mage’s brain. Sebastian underestimated them; he was not strong enough to withstand the lunacy in their presence. In a bout of derangement, Sebastian activated the device while standing in the transmutation circle.

When Sebastian Brie activated the device, it stole away the life energy of three gibbering mouthers and the hapless wizard. Their combined essences were distilled into a vial of corrupted Void Extract. The strange mix­ture is fatal to drink but could be used as a focus for ar­cane experiments and binding rituals (see Conclusion).

On a larger, overarching quest, the characters require access to a theoretical substance that can aid them in de­feating a mighty foe. A mentor or ally is the source of this knowledge: A substance known as Void Extract has pow­erful magical properties that can protect them against extraplanar threats; it can also be used as a weapon.

The characters must spend 1d4 weeks following leads, investigating in libraries, and consulting sages. After this investigation, all evidence points to a small town where Sebastian Brie died in a dangerous experiment about 8 years ago. The locals claim the man was altruistic and helped the townsfolk often. After a thunderous explosion in his laboratory, he was never seen again. Some tried to explore the lair but fell prey to deadly traps.

Features of the Lair

Light. The wall sconces in the lair feature continual flame spells. The magic fades in 1 minute if removed.

Arcane Negation. A random-acting, anti-magic field in the lair negates the casting of arcane spells within the compound. When an arcane spell is cast, there is a 1-in-6 chance it fizzles out. Divine spells are unaffected.

Magic Traps. Trap devices in the lair reset once per hour, including the exploding runes on doors. An auto­mated mending spell repairs damaged devices too.

A long flight of stairs in the mage’s abandoned home leads down to a grand chamber with a 15-foot-wide glowing circle surrounded by three tentacled statues.

A fine sequence of runes in the circle can be used with the circle of teleportation spell. Stepping on the circle, though, triggers the two summoning seals in the room. A one-way, glittering portal into the plane of madness opens and two gibbering mouthers emerge to attack. During combat, the three tentacled statues on the walls take on a quasi-living quality and cast the confusion spell centered on a different character (recharge 5-6 each).

The twenty-foot-long, east path is not visible when the characters come from area 1. A major image spell makes it seem covered by a stone wall and produces the sound of steps on the stairs in front of it. The sound is meant to distract the trespasser so that they turn left and away from the illusory wall. When a creature reaches the stairs, the hidden, automated crossbow activates and shoots a bolt aiming at the closest target. The creature takes 8d6 piercing damage (DC 17 Dexterity / half).

Treasure. The coffer at the bottom of the stairs con­tains a set of rotten robes, a pouch with 350 gp, two po­tions of greater healing, and a blank spellbook.

A layer of dust and cobwebs covers the furniture in this ancient bedroom. Despite the long-term aban­donment, the room is somewhat welcoming and cozy.

Sebastian lived and worked here. A foldable bed hangs on the east wall. The remains of decayed food lie on the night-table plates. Sebastian’s incomplete journal on the desk reveals the following after a 10-minute review:

The room contains two bookcases, a desk, a wooden chest, and a wheel valve. Sebastian’s research, arcane formulae, and documentation on his binding device are on the desk. A spellcaster can review them in 1 hour to understand the workings of the arcane engines in area 9.

The wheel valve causes the invisible pathways in area 6 to glow in the dark. It can only be operated by saying the command word (see area 3). Otherwise, a dispel magic spell allows the immovable valve to be used once.

A beautiful, three-level fountain pours a bright magen­ta fluid and produces a fragrance of roses and pines.

When a creature comes within 5 feet of the fountain, all three doors lock and poisonous fumes are released from it. Creatures in the room take 6d6 poison damage per round of exposure (DC 16 Constitution / half). The rein­forced doors from area 1 can only be bypassed by a mas­ter locksmith (DC 20 Thieves’ Tools).

The hallway ends and an insurmountable gap fol­lows. The walls are decorated with ancient, flowing elvish runes. The far side is hidden in darkness.

The elvish runes spell an old poem about floating leaves in the wind. There is a path to cross the gap in each area 6. There are invisible, 2-foot-wide, floating sections of stone that can be used to cross south. Crossing without aid is a dangerous proposition. Through trial and error, a creature can use an object to feel its way across. Each 20-foot section requires caution and precision (DC 18 Dexterity). A failure by 5 or more causes a creature to fall. The bottom is 80 feet below, falling creatures take 8d6 bludgeoning damage. Operating the valve in area 4 causes the pathways to glow in the dark. This discovery is not immediately apparent if the characters have artifi­cial light sources with them (DC 16 Intelligence).

The secret chamber contains several stone chests with bronze locks and a stone coffer. The enclosures are open.

Treasure. Collectively, the chests contain 90 pp, 2,000 gp, 4,350 sp, a black velvet mask stitched with silver thread (25 gp), a silver ewer (45 gp), a bag of holding, a driftglobe, a potion of fire breath, a potion of resistance (cold), and a spell scroll of expeditious retreat.

The secret chamber contains several stone chests and a single bookshelf packed with scrolls and tomes.

Two tower-like, arcane apparatuses glow in this chamber. Cables connect them to a magic circle on a raised dais. A layer of magenta dust on everything.

Only dust remains of Sebastian and the aberration’s corpses. However, a crystal vial on the magic circle con­tains the corrupted Void Extract. It contains Sebastian’s deranged soul (see Conclusion). A spellcaster who re­viewed the documents in area 4 can operate the con­trol panel, place a new vial on the magic circle, and ac­tivate the device. Doing so, summons eight gibbering mouthers to each summoning seal (see map). Defeating them in combat weakens them and allows the arcane en­gines to function. Upon defeat, their essences are cap­tured and distilled into the crystal vial. If a character stands on the circle when this occurs, they suffer the same fate as Sebastian and ruin the binding experiment (no save). Otherwise, a vial of Void Extract is created.

Successful creation of the Void Extract overwhelms the arcane engines and damages them. They require years of research and work to be repaired. The Void Ex­tract is a campaign item that shall aid them to overcome the planar threats of their home campaign. Thus, the na­ture of the Void Extract and its effects are left to the GM’s discretion. It is recommended that the acquisition of this item marks a mighty change in the campaign.

The corrupted Void Extract is fatal if drunk (no save). However, an arcane spellcaster can attune to it as an ar­cane focus. It is cursed. Once per day, the caster can cast a spell as if one level higher. 2d6 weeks after, the cast­er starts hearing maddening whispers from the vial. It threatens to render the mage insane once per day akin to the contact other plane spell (DC 15 Intelligence).

A character standing on the circle when the arcane en­gines power on becomes trapped in a second vial of cor­rupted Void Extract. Retrieving their soul is almost im­possible. Alas, that is an adventure for another day…