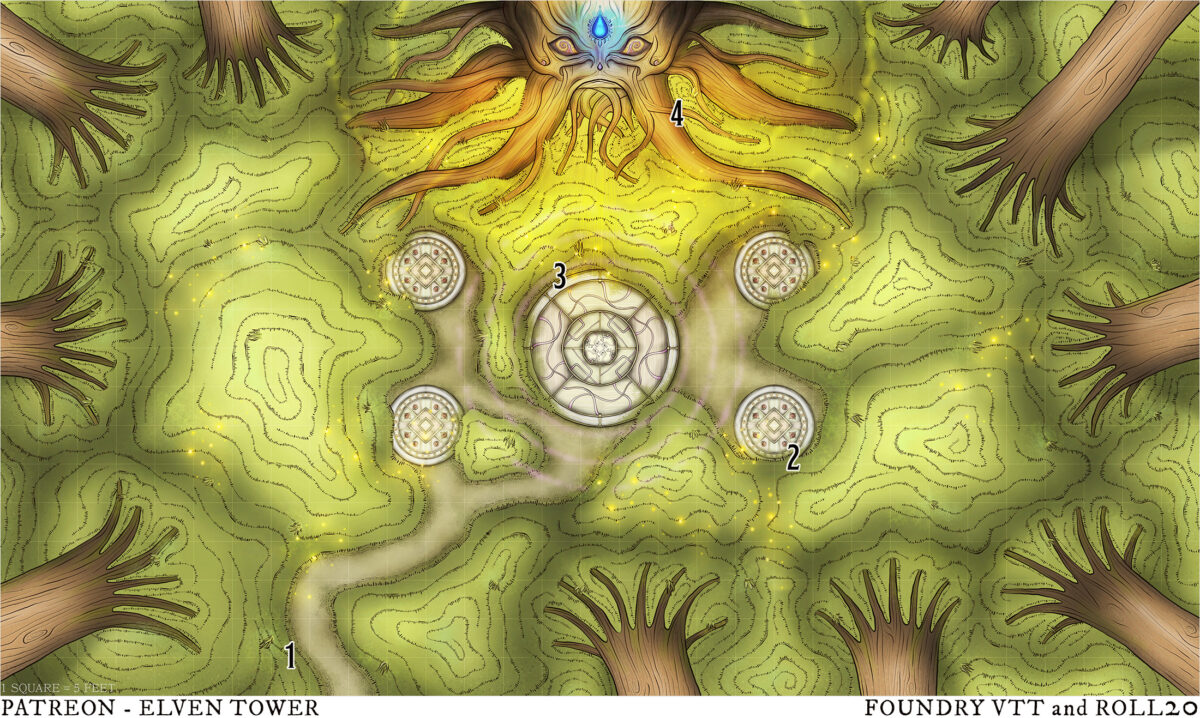 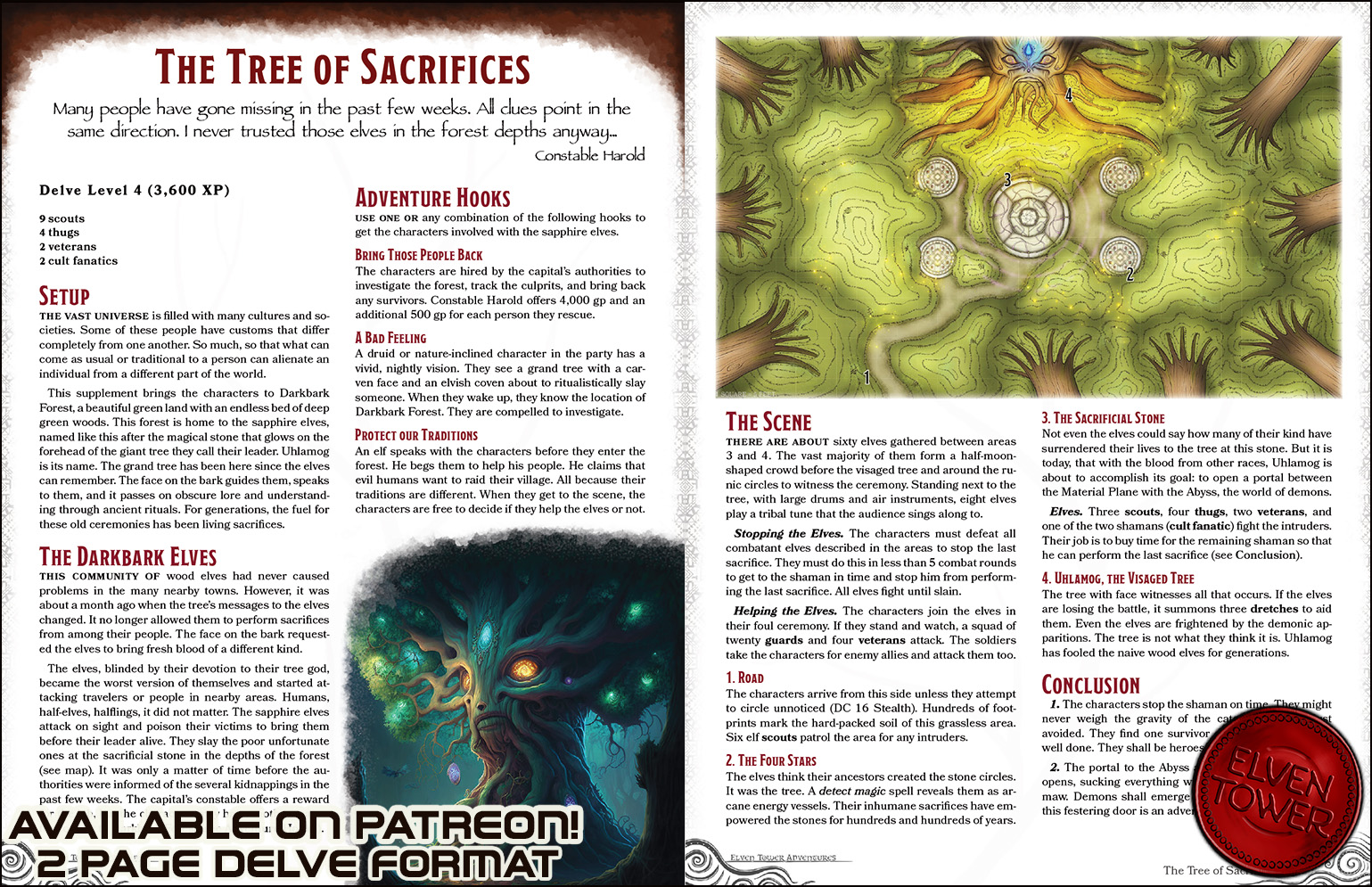 Many people have gone missing in the past few weeks. All clues point in the same direction. I never trusted those elves in the forest depths anyway…

The vast universe is filled with many cultures and so­cieties. Some of these people have customs that differ completely from one another. So much, so that what can come as usual or traditional to a person can alienate an individual from a different part of the world.

This supplement brings the characters to Darkbark Forest, a beautiful green land with an endless bed of deep green woods. This forest is home to the sapphire elves, named like this after the magical stone that glows on the forehead of the giant tree they call their leader. Uhlamog is its name. The grand tree has been here since the elves can remember. The face on the bark guides them, speaks to them, and it passes on obscure lore and understand­ing through ancient rituals. For generations, the fuel for these old ceremonies has been living sacrifices.

This community of wood elves had never caused problems in the many nearby towns. However, it was about a month ago when the tree’s messages to the elves changed. It no longer allowed them to perform sacrifices from among their people. The face on the bark request­ed the elves to bring fresh blood of a different kind.

The elves, blinded by their devotion to their tree god, became the worst version of themselves and started at­tacking travelers or people in nearby areas. Humans, half-elves, halflings, it did not matter. The sapphire elves attack on sight and poison their victims to bring them before their leader alive. They slay the poor unfortunate ones at the sacrificial stone in the depths of the forest (see map). It was only a matter of time before the au­thorities were informed of the several kidnappings in the past few weeks. The capital’s constable offers a reward for the job, but the characters may have another reason for coming to Darkbark Forest (see Adventure Hooks).

Use one or any combination of the following hooks to get the characters involved with the sapphire elves.

Bring Those People Back

The characters are hired by the capital’s authorities to investigate the forest, track the culprits, and bring back any survivors. Constable Harold offers 4,000 gp and an additional 500 gp for each person they rescue.

A druid or nature-inclined character in the party has a vivid, nightly vision. They see a grand tree with a car­ven face and an elvish coven about to ritualistically slay someone. When they wake up, they know the location of Darkbark Forest. They are compelled to investigate.

An elf speaks with the characters before they enter the forest. He begs them to help his people. He claims that evil humans want to raid their village. All because their traditions are different. When they get to the scene, the characters are free to decide if they help the elves or not.

There are about sixty elves gathered between areas 3 and 4. The vast majority of them form a half-moon-shaped crowd before the visaged tree and around the ru­nic circles to witness the ceremony. Standing next to the tree, with large drums and air instruments, eight elves play a tribal tune that the audience sings along to.

Stopping the Elves. The characters must defeat all combatant elves described in the areas to stop the last sacrifice. They must do this in less than 5 combat rounds to get to the shaman in time and stop him from perform­ing the last sacrifice. All elves fight until slain.

Helping the Elves. The characters join the elves in their foul ceremony. If they stand and watch, a squad of twenty guards and four veterans attack. The soldiers take the characters for enemy allies and attack them too.

The characters arrive from this side unless they attempt to circle unnoticed (DC 16 Stealth). Hundreds of foot­prints mark the hard-packed soil of this grassless area. Six elf scouts patrol the area for any intruders.

The elves think their ancestors created the stone circles. It was the tree. A detect magic spell reveals them as ar­cane energy vessels. Their inhumane sacrifices have em­powered the stones for hundreds and hundreds of years.

Not even the elves could say how many of their kind have surrendered their lives to the tree at this stone. But it is today, that with the blood from other races, Uhlamog is about to accomplish its goal: to open a portal between the Material Plane with the Abyss, the world of demons.

Elves. Three scouts, four thugs, two veterans, and one of the two shamans (cult fanatic) fight the intruders. Their job is to buy time for the remaining shaman so that he can perform the last sacrifice (see Conclusion).

The tree with face witnesses all that occurs. If the elves are losing the battle, it summons three dretches to aid them. Even the elves are frightened by the demonic ap­paritions. The tree is not what they think it is. Uhlamog has fooled the naive wood elves for generations. 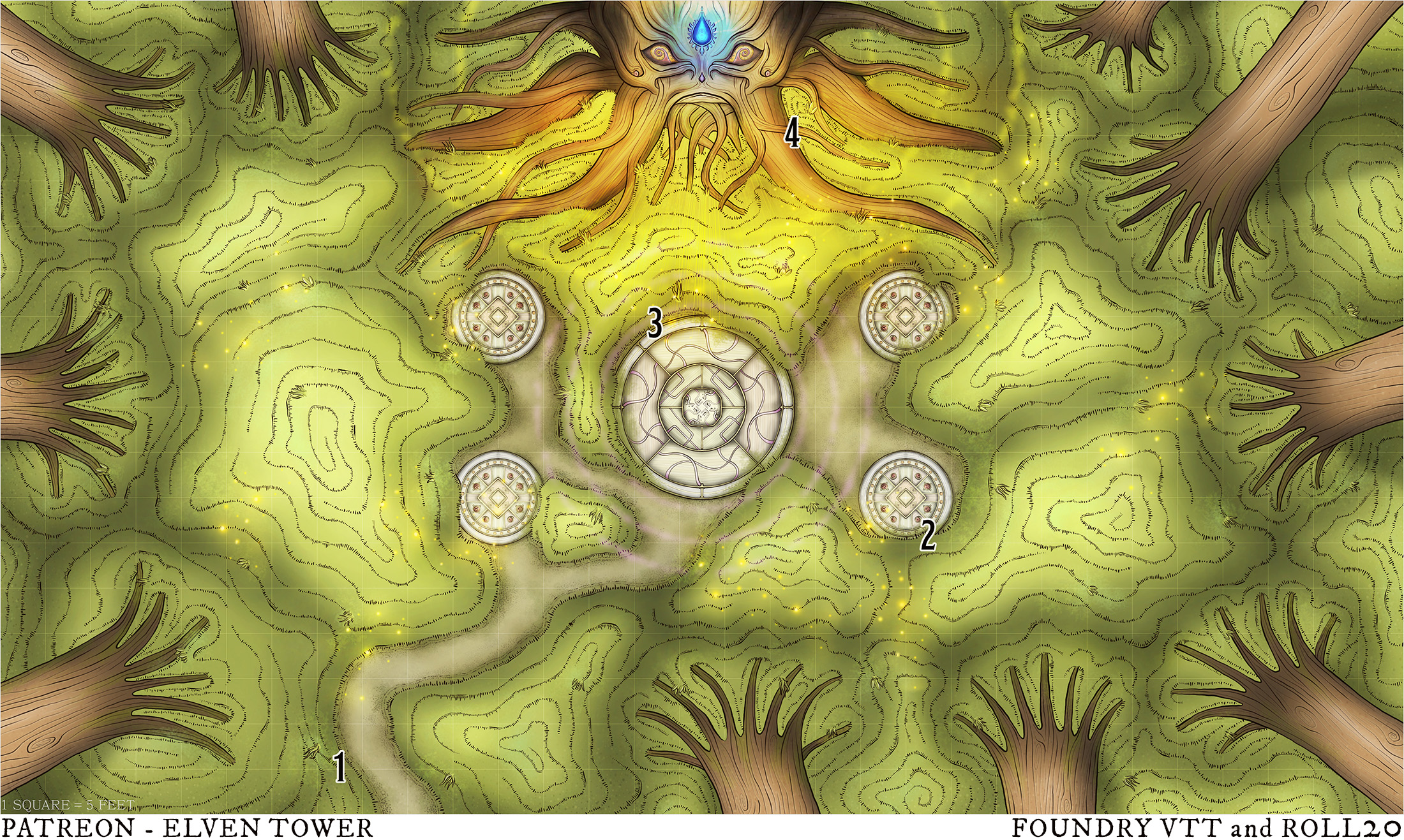