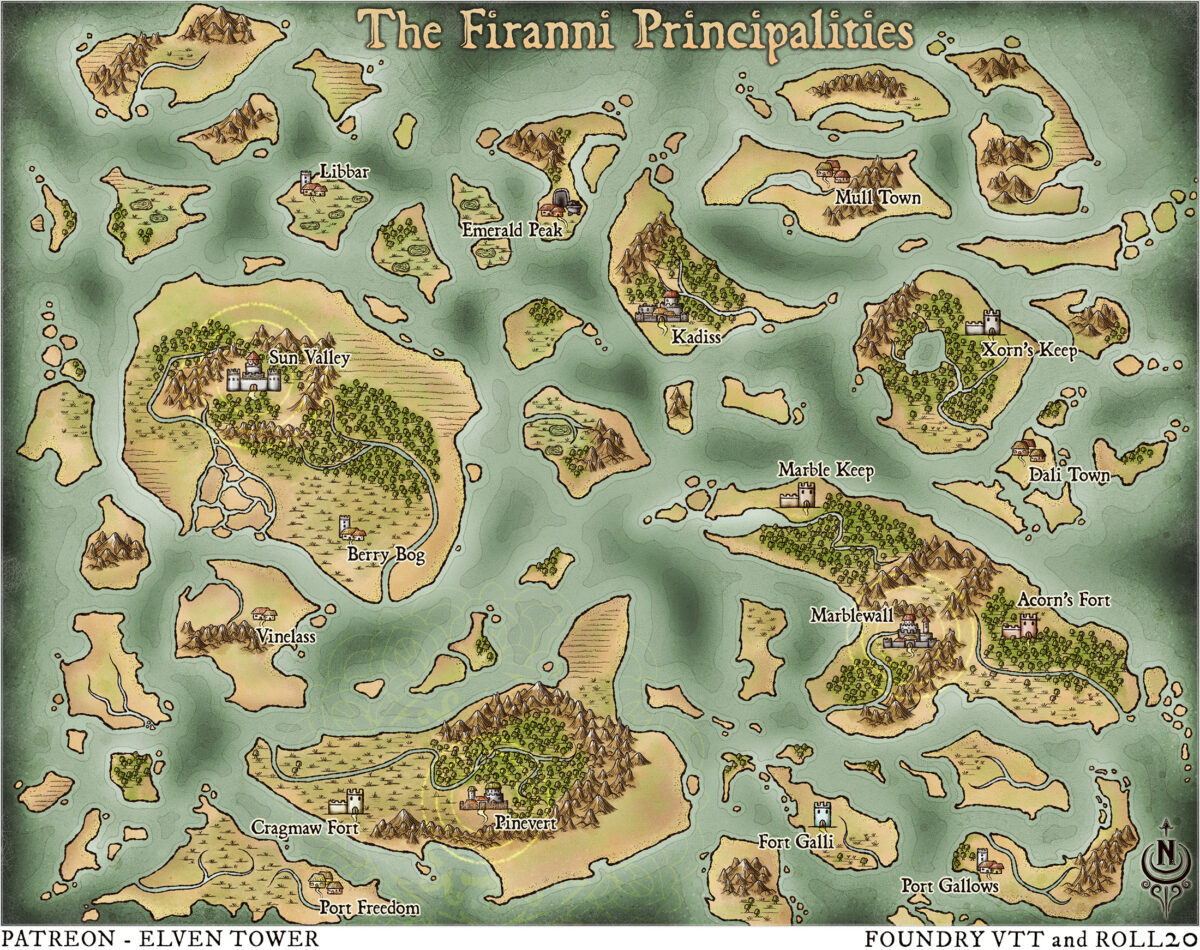 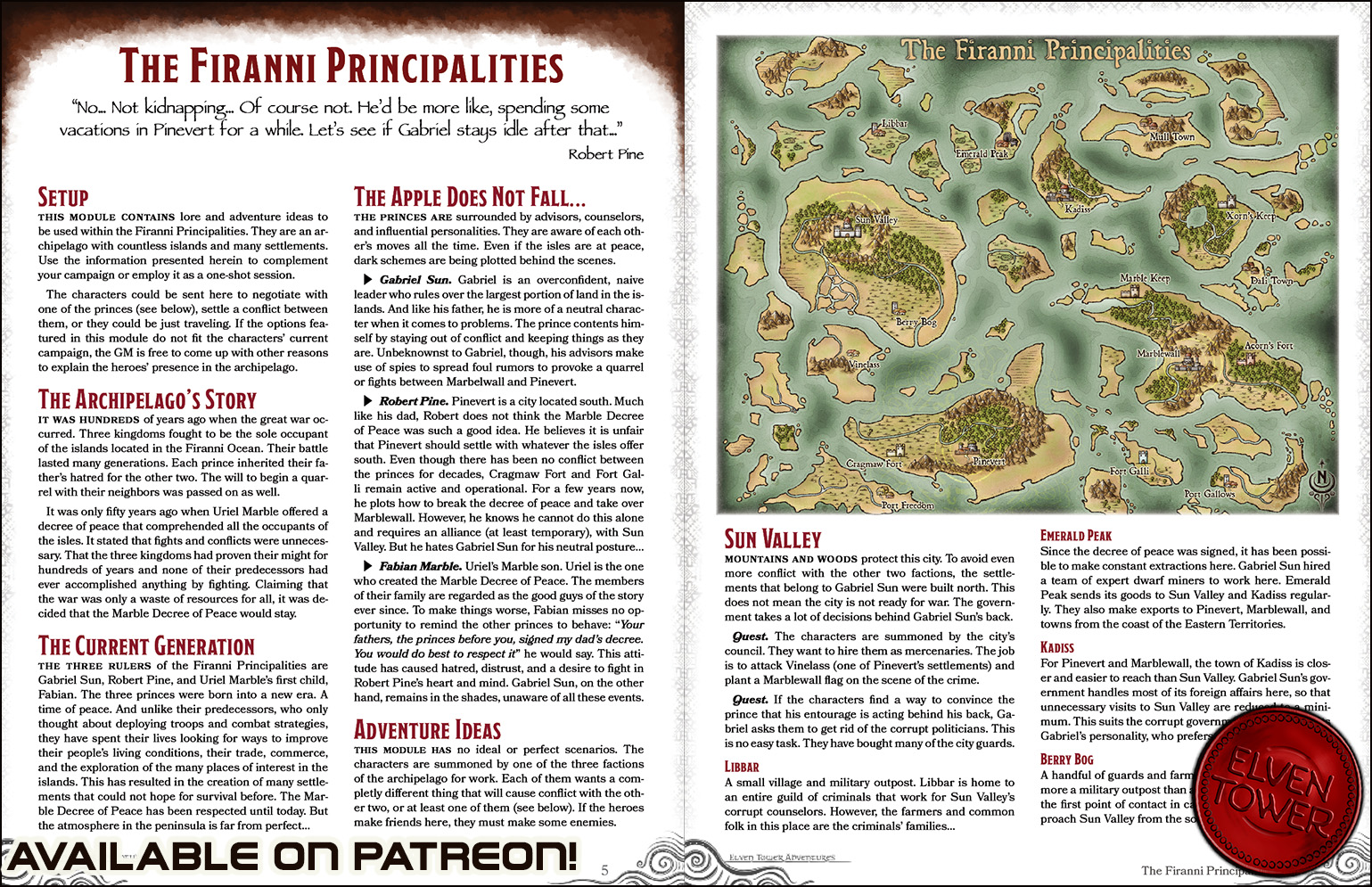 “No… Not kidnapping… Of course not. He’d be more like, spending some vacations in Pinevert for a while. Let’s see if Gabriel stays idle after that…”

This supplement contains lore and adventure ideas to be used within the Firanni Principalities. They are an archipelago with countless islands and numerous settle­ments. Use the information presented herein to comple­ment your campaign or employ it as a one-shot session.

The characters could be sent here to negotiate with one of the princes, settle a conflict between them, or they could be just traveling. If the options featured in this module do not fit the characters’ current campaign, the GM is free to come up with other reasons to explain the characters’ presence in the Firanni Principalities.

It was hundreds of years ago when the great war oc­curred. Three principalities fought to be the sole occu­pant of the islands located in the Firanni Ocean. Their battle lasted many generations. Each prince inherited their father’s hatred for the other two. The will to begin a quarrel with their neighbors was passed on as well.

It was only fifty years ago when Uriel Marble offered a peace decree that comprehended all the occupants of the isles. It stated that fights and conflicts were unneces­sary. That the three principalities had proven their might for hundreds of years and none of their predecessors had ever accomplished anything by fighting. Claiming that the war was only a waste of resources for all, it was decided that the Marble Peace decree would prevail.

The three rulers of the Firanni Principalities are Gabriel Sun, Robert Pine, and Uriel Marble’s first child, Fabian. The three princes were born into a new era. A time of peace. And, unlike their predecessors, who only thought about deploying troops and combat strategies, they have spent their lives looking for ways to improve their people’s living conditions, trade, commerce, and the exploration of the many places of interest in the ar­chipelago. This has resulted in the creation of many set­tlements that could not hope for survival before. The Marble Peace decree has been respected until today. But the atmosphere in the peninsula is far from perfect…

The Apple Does Not Fall…

The princes are surrounded by advisors, counselors, and influential personalities. They are aware of each oth­er’s moves at all times. Even if the isles are at peace, dark, nefarious schemes are being plotted behind the scenes.

The characters are summoned by one of the three factions of the archipelago for work. Each of them wants something that shall cause conflict with the other two principalities, or at least one of them (see below). If the heroes make friends in one principality, they must pay the price of earning the enmity of the others.

Mountains and woods surround this city. To avoid even more conflict with the other two principalities, Ga­briel Sun’s settlements were built north. This does not mean the city is not ready for war. The government takes plenty of decisions behind Gabriel Sun’s back.

Quest. The characters are summoned by the city’s council to hire them as mercenaries. Their job is to sail and raid Vinelass (one of Pinevert’s settlements) and plant a Marblewall flag on the scene of the crime.

Quest. If the characters find a way to convince the prince that his advisors are acting behind his back, Ga­briel asks them to get rid of the corrupt politicians. This is no easy task. They have bought many of the city guards.

A small village and military outpost. Libbar is home to an entire guild of criminals that work for Sun Valley’s corrupt advisors. The commonfolk here are the crimi­nals’ families who support their immoral activities.

Since the peace decree was signed, it is possible to have a profitable mining operation here. Gabriel Sun hired a team of dwarf prospectors/miners for the job. Emerald Peak sends hebdomadal goods to Sun Valley and Kadiss. They also make regular exports to Pinevert, Marblewall, and coastal towns in the Eastern Territories.

For Pinevert and Marblewall, the town of Kadiss is clos­er and easier to reach than Sun Valley. Gabriel Sun’s gov­ernment handles most of its foreign affairs here, so that unnecessary visits to Sun Valley are reduced to a mini­mum. This suits the corrupt government while it also fits Gabriel’s personality, who prefers to avoid it all.

A handful of guards and farmers live here. Berry Bog is more a military outpost than anything else. It exists to be the first point of contact in case someone wishes to ap­proach Sun Valley from the south unannounced.

Robert Pine is the ruler of the archipelago’s south. He possesses the largest military force in the isles. There are troops deployed in Fort Galli, Port Gallows, and Crawg­maw Fort; and more arrive each passing day. Robert only needs a good excuse to start a war. He does not wish to do it without a reasonable cause, lest Gabriel could wake up from his slumber to help the enemy, and not him.

Quest. The characters’ exploits are tracked by Robert Pine’s advisors. He summons the characters for an im­portant job. They must infiltrate Sun Valley and kidnap Damian Sun, Gabriel’s only child and heir to Sun Valley. Robert will use him to force Gabriel’s hand into action.

This is a small settlement of fishermen, hunters, and trackers. They are all good soldiers that work for Robert Pine. They scout the area, including the neighboring, un­settled islands at all times, even at night. They maintain Pinevert informed of any naval movement.

Robert Pine prepares little by little. He waits for the best time to make his move or a way to twist Gabriel’s hand into joining forces with him (see quest above). Both of these places are packed with soldiers, weapons, and siege weaponry such as scorpions, ballistas, and rams.

Lots of fishermen work on this side of the archipelago to catch the best shrimp and tuna of the isles. However, ever since Robert’s plans of conquest started, this port is slowly becoming another military outpost.

Robert incorrectly believes that this place is named af­ter his philosophy of war. To this day, he ignores that this settlement is home to many who wish to leave Pinevert’s military inclinations. A clandestine operation helps peo­ple move to Sun Valley or Marblewall on small boats.

Even if it is all due to his father’s work, Fabian has the best reputation and standing with foreigners. The East­ern Territories seek to trade with Marblewall twice as much as with the other two principalities. And this is not only because of its geographic advantage. Fabian does not care how this makes the other princes feel. He has an idea to make them bend the knee a bit more.

Quest. Fabian knows the characters for their diplo­matic exploits and negotiation successes in the past. He believes they are the perfect group to deliver a letter to the other two princes. In this letter, he politely requests Gabriel Sun and Robert Pine, princes of Sun Valley and Pinevert respectively, to sign a new peace decree. This one is called Fabian’s Peace decree. The letter then goes on with 10 pages of formalities and details.

Despite Fabian’s dreams of greatness, he is not a bad leader and knows how to manage his people. He is aware of Robert’s soldiers to the south but he trusts that the man won’t make a move unless he has a real cause. Fabian has the support of the Eastern Territories’ lead­ers and Robert knows that. He needs a reason to act.

These two small settlements are extensions of Marble­wall. The city grows and they opted to expand north. Many of the farmers and folk that live here come from the Eastern Territories. They seek better lives in the rich archipelago. They hope to be the pioneers of a larger community. They build for the generations to come.

Fabian placed this military outpost in between the two smaller villages to protect them from any surprise move from Robert. Soldiers scout the area regularly. The fort also serves as a communication outpost for the cities and leaders from the Eastern Territories. 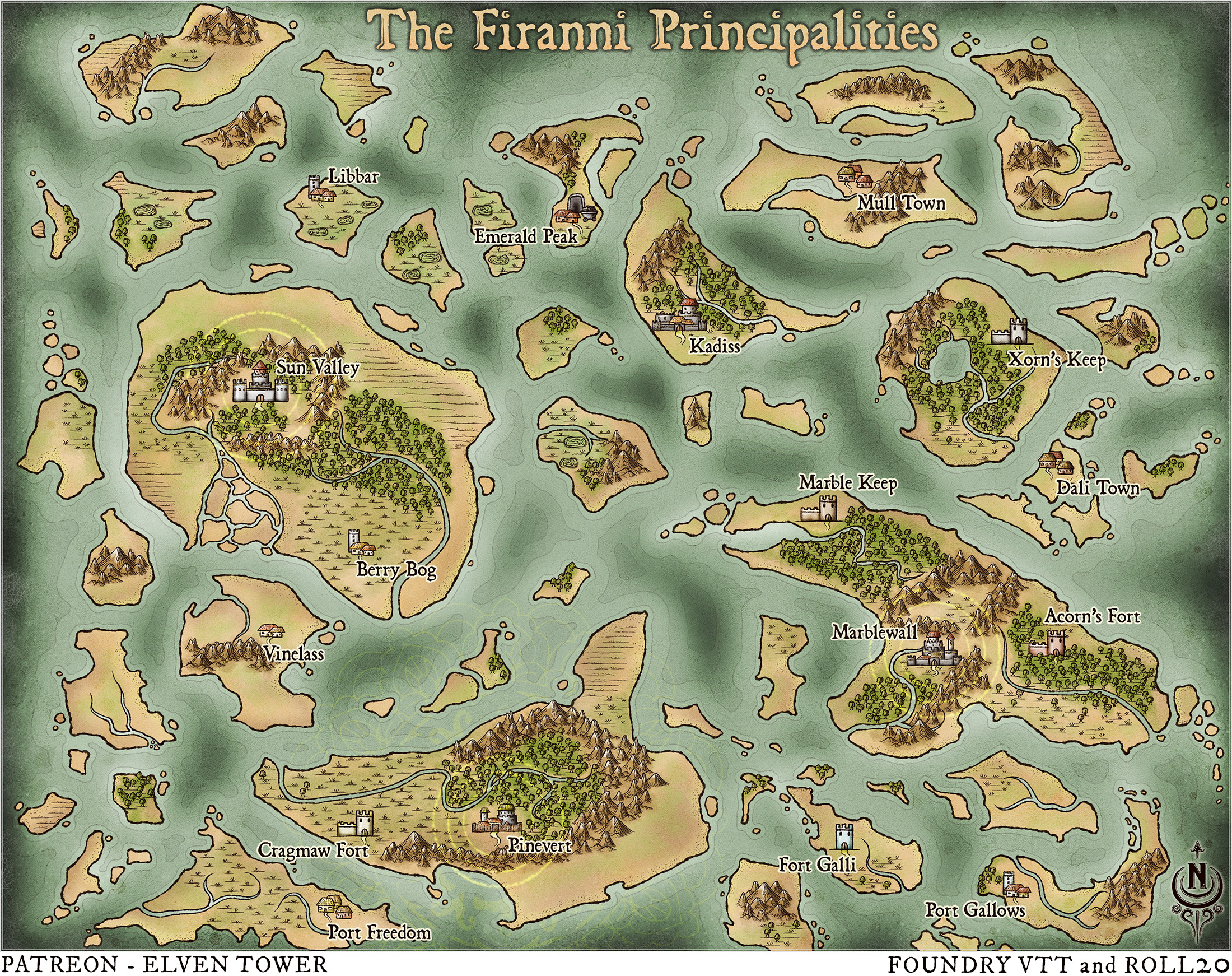