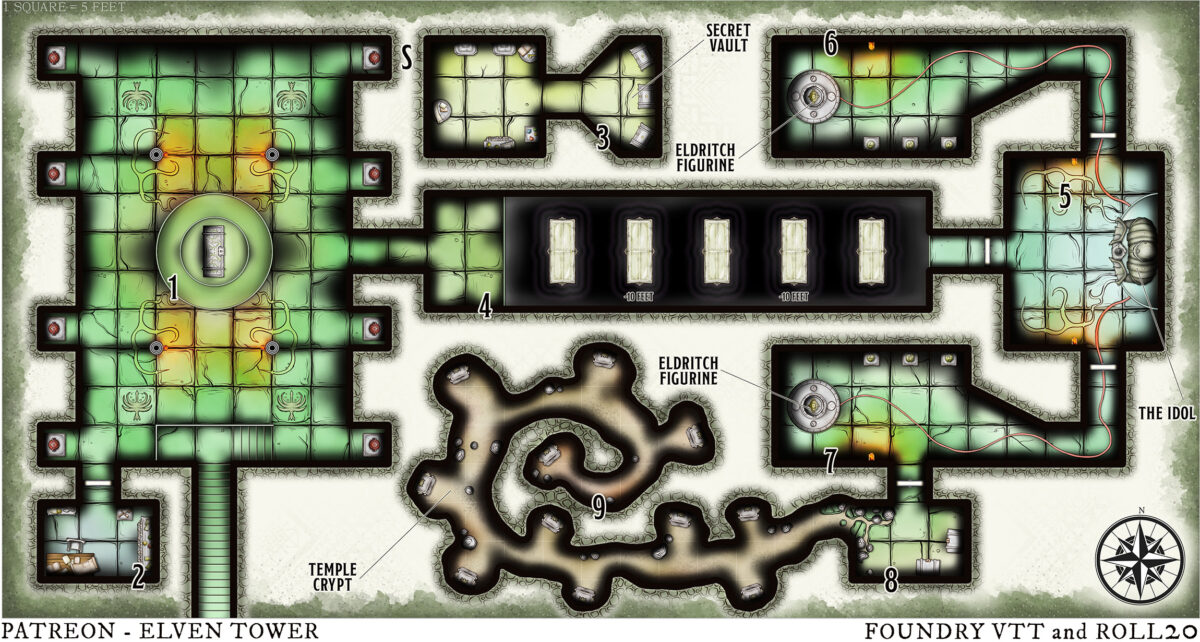 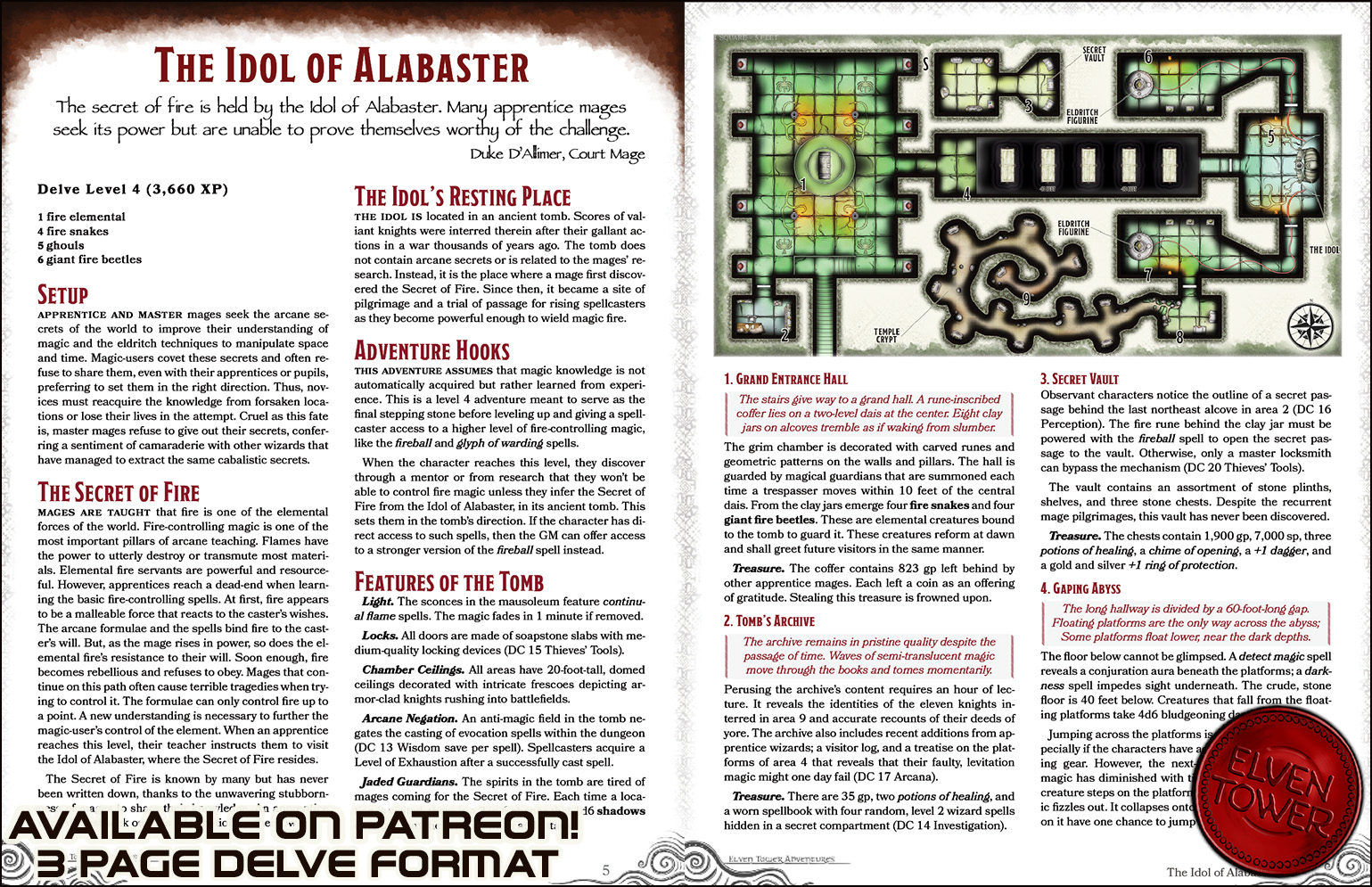 The secret of fire is held by the Idol of Alabaster. Many apprentice mages seek its power but are unable to prove themselves worthy of the challenge.

Apprentice and master mages seek the arcane se­crets of the world to improve their understanding of magic and the eldritch techniques to manipulate space and time. Magic-users covet these secrets and often re­fuse to share them, even with their apprentices or pupils, preferring to set them in the right direction. Thus, nov­ices must reacquire the knowledge from forsaken loca­tions or lose their lives in the attempt. Cruel as this fate is, master mages refuse to give out their secrets, confer­ring a sentiment of camaraderie with other wizards that have managed to extract the same cabalistic secrets.

The Secret of Fire

Mages are taught that fire is one of the elemental forces of the world. Fire-controlling magic is one of the most important pillars of arcane teaching. Flames have the power to utterly destroy or transmute most materi­als. Elemental fire servants are powerful and resource­ful. However, apprentices reach a dead-end when learn­ing the basic fire-controlling spells. At first, fire appears to be a malleable force that reacts to the caster’s wishes. The arcane formulae and the spells bind fire to the cast­er’s will. But, as the mage rises in power, so does the el­emental fire’s resistance to their will. Soon enough, fire becomes rebellious and refuses to obey. Mages that con­tinue on this path often cause terrible tragedies when try­ing to control it. The formulae can only control fire up to a point. A new understanding is necessary to further the magic-user’s control of the element. When an apprentice reaches this level, their teacher instructs them to visit the Idol of Alabaster, where the Secret of Fire resides.

The Secret of Fire is known by many but has never been written down, thanks to the unwavering stubborn­ness of mages to share their knowledge. An apprentice wizard must seek out this information on their own.

The idol is located in an ancient tomb. Scores of val­iant knights were interred therein after their gallant ac­tions in a war thousands of years ago. The tomb does not contain arcane secrets or is related to the mages’ re­search. Instead, it is the place where a mage first discov­ered the Secret of Fire. Since then, it became a site of pilgrimage and a trial of passage for rising spellcasters as they become powerful enough to wield magic fire.

This adventure assumes that magic knowledge is not automatically acquired but rather learned from experi­ence. This is a level 4 adventure meant to serve as the final stepping stone before leveling up and giving a spell­caster access to a higher level of fire-controlling magic, like the fireball and glyph of warding spells.

When the character reaches this level, they discover through a mentor or from research that they won’t be able to control fire magic unless they infer the Secret of Fire from the Idol of Alabaster, in its ancient tomb. This sets them in the tomb’s direction. If the character has di­rect access to such spells, then the GM can offer access to a stronger version of the fireball spell instead.

Locks. All doors are made of soapstone slabs with me­dium-quality locking devices (DC 15 Thieves’ Tools).

Arcane Negation. An anti-magic field in the tomb ne­gates the casting of evocation spells within the dungeon (DC 13 Wisdom save per spell). Spellcasters acquire a Level of Exhaustion after a successfully cast spell.

Jaded Guardians. The spirits in the tomb are tired of mages coming for the Secret of Fire. Each time a loca­tion is visited, there is a 2-in-6 chance that 1d6 shadows emerge from the cracked walls and attack.

The stairs give way to a grand hall. A rune-inscribed coffer lies on a two-level dais at the center. Eight clay jars on alcoves tremble as if waking from slumber.

The grim chamber is decorated with carved runes and geometric patterns on the walls and pillars. The hall is guarded by magical guardians that are summoned each time a trespasser moves within 10 feet of the central dais. From the clay jars emerge four fire snakes and four giant fire beetles. These are elemental creatures bound to the tomb to guard it. These creatures reform at dawn and shall greet future visitors in the same manner.

Treasure. The coffer contains 823 gp left behind by other apprentice mages. Each left a coin as an offering of gratitude. Stealing this treasure is frowned upon.

The archive remains in pristine quality despite the passage of time. Waves of semi-translucent magic move through the books and tomes momentarily.

Perusing the archive’s content requires an hour of lec­ture. It reveals the identities of the eleven knights in­terred in area 9 and accurate recounts of their deeds of yore. The archive also includes recent additions from ap­prentice wizards; a visitor log, and a treatise on the plat­forms of area 4 that reveals that their faulty, levitation magic might one day fail (DC 17 Arcana).

Treasure. There are 35 gp, two potions of healing, and a worn spellbook with four random, level 2 wizard spells hidden in a secret compartment (DC 14 Investigation).

Observant characters notice the outline of a secret pas­sage behind the last northeast alcove in area 2 (DC 16 Perception). The fire rune behind the clay jar must be powered with the fireball spell to open the secret pas­sage to the vault. Otherwise, only a master locksmith can bypass the mechanism (DC 20 Thieves’ Tools).

The vault contains an assortment of stone plinths, shelves, and three stone chests. Despite the recurrent mage pilgrimages, this vault has never been discovered.

The long hallway is divided by a 60-foot-long gap. Floating platforms are the only way across the abyss; Some platforms float lower, near the dark depths.

The floor below cannot be glimpsed. A detect magic spell reveals a conjuration aura beneath the platforms; a dark­ness spell impedes sight underneath. The crude, stone floor is 40 feet below. Creatures that fall from the float­ing platforms take 4d6 bludgeoning damage.

Jumping across the platforms is not a difficult deed, es­pecially if the characters have access to ropes and climb­ing gear. However, the next-to-last platform’s floating magic has diminished with time. When more than one creature steps on the platform at the same time, its mag­ic fizzles out. It collapses onto the floor below. Creatures on it have one chance to jump away (DC 16 Dex save).

The alabaster, masterwork effigy of an armor-clad knight holding his broadsword in front of him towers high, overlooking the otherwise desolate chamber.

A summoning trap is meant to activate when trespass­ers reach this room. Alas, it is deactivated as its work­ings hide the Secret of Fire, for those that are sentient enough to discern it. Operating the Eldritch Figurines in areas 6 and 7 reactivates the summoning device in the idol’s base. After the activation, a fire elemental and two giant fire beetles materialize before the Idol of Alabas­ter. The defeat of the fire elemental is what springs the discovery of the Secret of Fire (see Conclusion).

Treasure. Sir Gadallast’s remains lie under the Idol of Alabaster. The statue must be brought down to access the enclosure beneath, damaging it beyond repair. The knight’s +2 longsword lies with the bodily remains.

A cable swifts in its way to a dais with a stone plinth. A gold figurine with an empty recess lies upon it. Three glowing medals rest on plinths by the wall.

One of the medals contains the power to activate the de­vice. The other two are forgeries created by envious mag­es who wished to make the process more contrived and dangerous. A detect magic spell reveals that two medals have an aura of evocation while the last one has an aura of conjuration. Placing the conjuration medal powers the device adequately. Using any of the other two medals causes a 15-foot-wide explosion. Creatures in the area take 4d6 fire damage (DC 16 dexterity / half).

This is a mirrored version of area 6. Powering this figu­rine is necessary for the summoning in area 6. The med­als function in the same manner, potentially causing a deadly explosion if the incorrect medal is used. Percep­tive individuals notice burnt-out bone remains near the chamber’s corners (DC 16 Perception). A mage notices the tell-tale signs of magical fire on the remains, reveal­ing the presence of the explosive trap (DC 16 Arcana).

The northwest corner of this chamber abandons all lav­ishness and gives way to a crude, shifting tunnel where the crypt lies. Those knowledgeable in architecture infer that the tomb was rushed before its completion (DC 14 Intelligence). The two stone chests are empty. They were plundered hundreds of years ago by visiting mages.

Eleven knights are interred in the shifting crypt, in lav­ish, ornate, standing sarcophagi. The mages who have come to this dungeon before have all ignored this area, finding no use in plundering the earthly tombs of long-gone knights. The ire of the knights has reanimated five of them as ghouls. When trespassers reach the sixth en­closure, they emerge in a rush of fury and madness.

Defeating the fire elemental in area 5 causes its energy to be absorbed by the mage who vanquished it. A spark of inspiration reveals the Secret of Fire: One must be­come one with the element and absorb it into one’s being to be able to truly gain control of it. Fire is the most rebel­lious of elements and its control requires the wielder to fuse their soul with it. After this revelation, the mage may opt, like those before him, to reset the dungeon’s traps so that acquiring the secret remains a trial of passage. 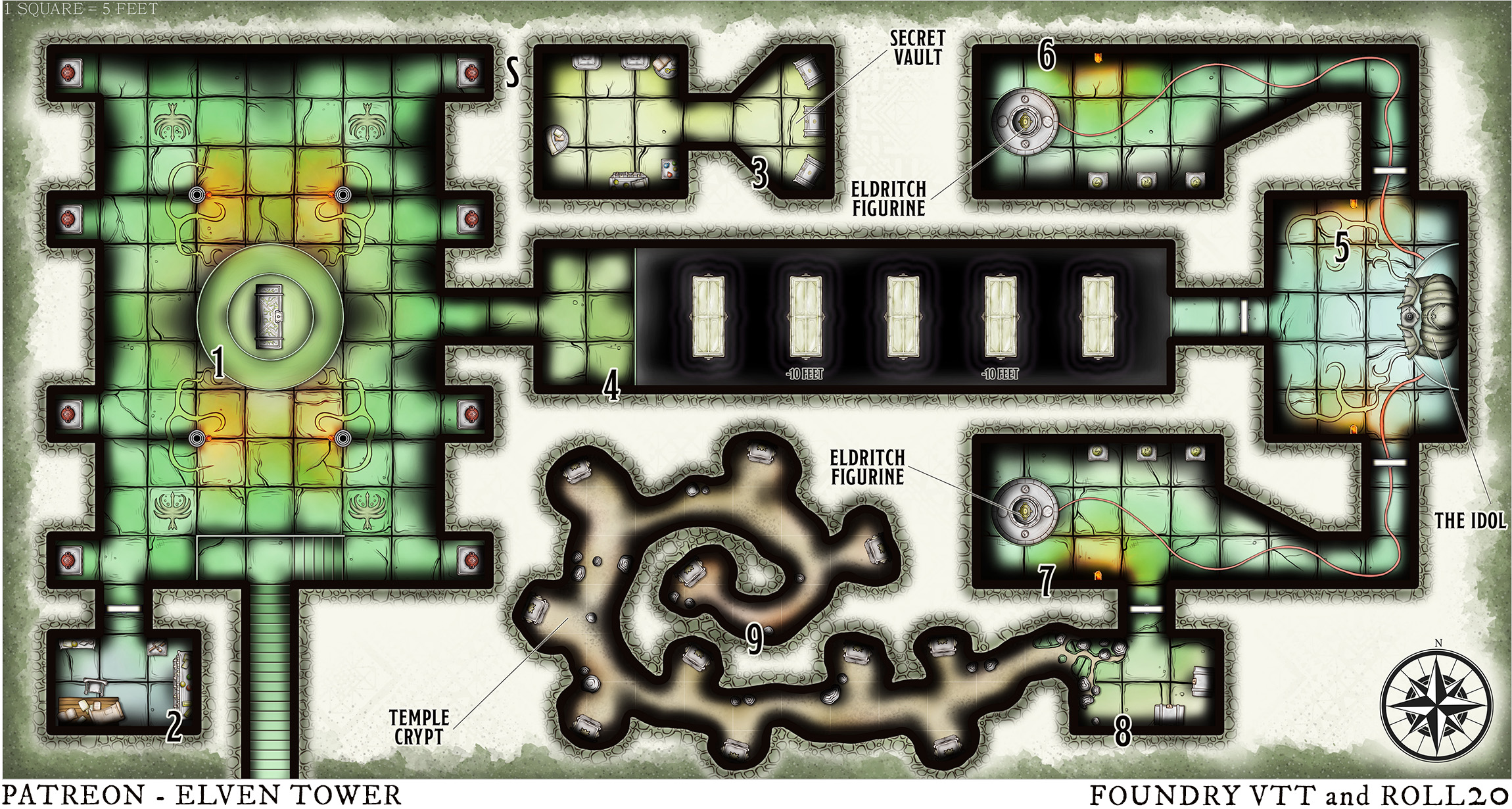