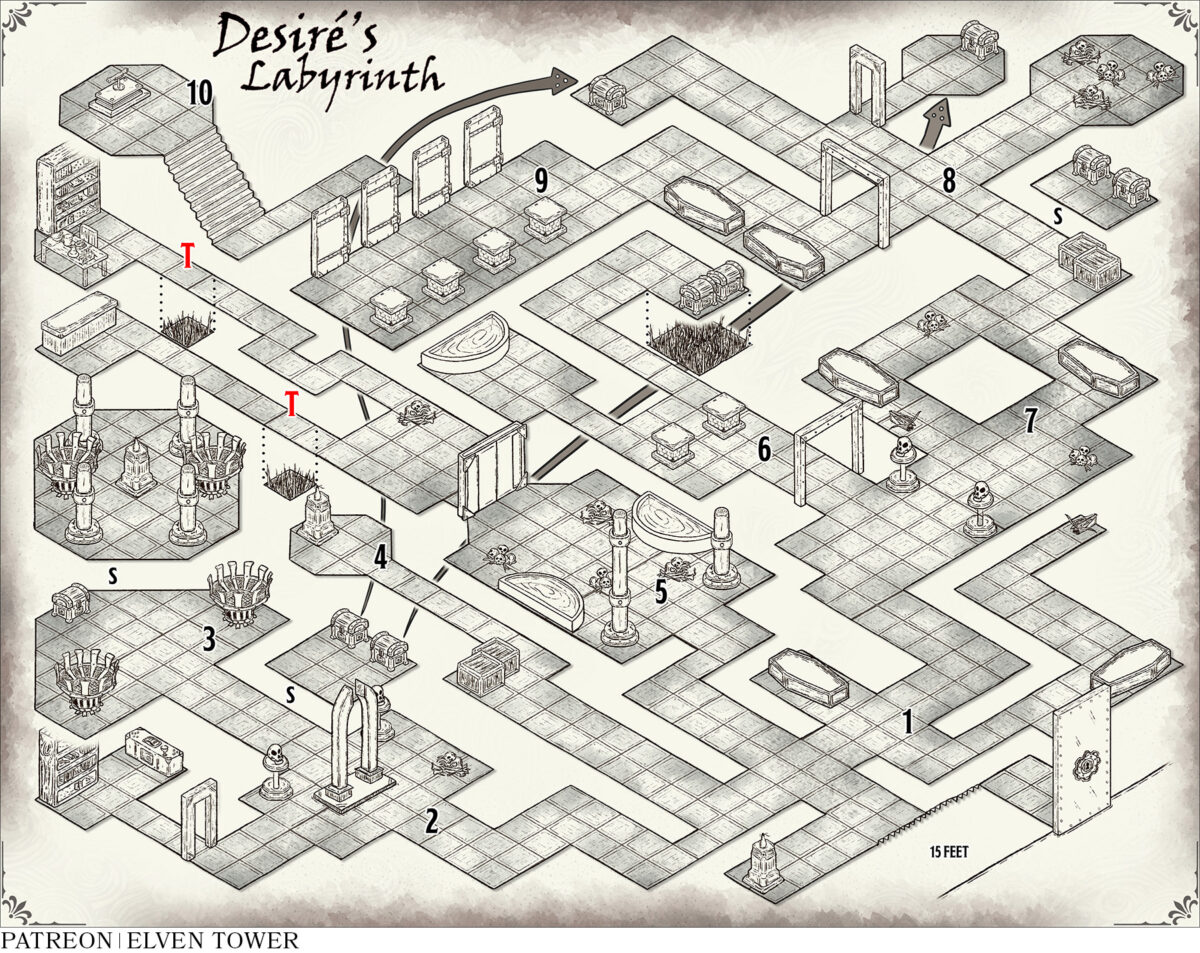 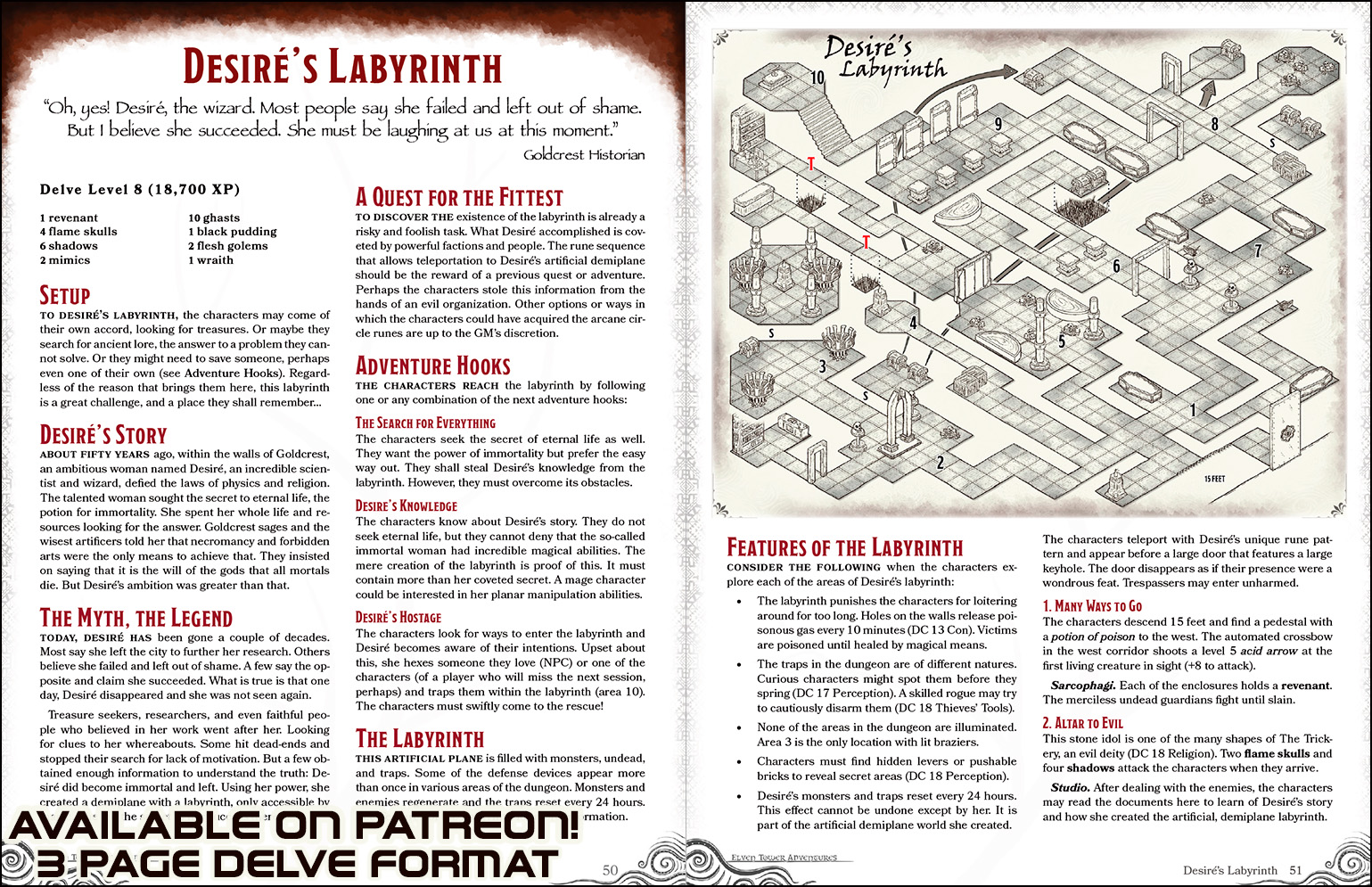 “Oh, yes! Desiré, the wizard. Most people say she failed and left out of shame. But I believe she succeeded. She must be laughing at us at this moment.”

To Desiré’s Labyrinth, the characters may come of their own accord, looking for treasures. Or maybe they search for ancient lore, the answer to a problem they can­not solve. Or they might need to save someone, perhaps even one of their own (see Adventure Hooks). Regard­less of the reason that brings them here, this labyrinth is a great challenge, and a place they shall remember…

Aboutfifty years ago, within the walls of Goldcrest, an ambitious woman named Desiré, an incredible scien­tist and wizard, defied the laws of physics and religion. The talented woman sought the secret to eternal life, the potion for immortality. She spent her whole life and re­sources looking for the answer. Goldcrest sages and the wisest artificers told her that necromancy and forbidden arts were the only means to achieve that. They insisted on saying that it is the will of the gods that all mortals die. But Desiré’s ambition was greater than that.

The Myth, the Legend

Today, Desiré has been gone a couple of decades. Most say she left the city to further her research. Others believe she failed and left out of shame. A few say the op­posite and claim she succeeded. What is true is that one day, Desiré disappeared and she was not seen again.

Treasure seekers, researchers, and even faithful peo­ple who believed in her work went after her. Looking for clues to her whereabouts. Some hit dead-ends and stopped their search for lack of motivation. But a few ob­tained enough information to understand the truth: De­siré did become immortal and left. Using her power, she created a demiplane with a labyrinth, only accessible by magic. She hid the secret to her success there…

A Quest for the Fittest

To discover the existence of the labyrinth is already a risky and foolish task. What Desiré accomplished is cov­eted by powerful factions and people. The rune sequence that allows teleportation to Desiré’s artificial demiplane should be the reward of a previous quest or adventure. Perhaps the characters stole this information from the hands of an evil organization. Other options or ways in which the characters could have acquired the arcane cir­cle runes are up to the GM’s discretion.

The characters reach the labyrinth by following one or any combination of the next adventure hooks:

The Search for Everything

The characters seek the secret of eternal life as well. They want the power of immortality but prefer the easy way out. They shall steal Desiré’s knowledge from the labyrinth. However, they must overcome its obstacles.

The characters know about Desiré’s story. They do not seek eternal life, but they cannot deny that the so-called immortal woman had incredible magical abilities. The mere creation of the labyrinth is proof of this. It must contain more than her coveted secret. A mage character could be interested in her planar manipulation abilities.

The characters look for ways to enter the labyrinth and Desiré becomes aware of their intentions. Upset about this, she hexes someone they love (NPC) or one of the characters (of a player who will miss the next session, perhaps) and traps them within the labyrinth (area 10). The characters must swiftly come to the rescue!

This artificial plane is filled with monsters, undead, and traps. Some of the defense devices appear more than once in various areas of the dungeon. Monsters and enemies regenerate and the traps reset every 24 hours. See Features of the Labyrinth for more information.

Features of the Labyrinth

Consider the Following when the characters ex­plore each of the areas of Desiré’s labyrinth:

The characters teleport with Desiré’s unique rune pat­tern and appear before a large door that features a large keyhole. The door disappears as if their presence were a wondrous feat. Trespassers may enter unharmed.

The characters descend 15 feet and find a pedestal with a potion of poison to the west. The automated crossbow in the west corridor shoots a level 5 acid arrow at the first living creature in sight (+8 to attack).

Sarcophagi. Each of the enclosures holds a revenant. The merciless undead guardians fight until slain.

This stone idol is one of the many shapes of The Trick­ery, an evil deity (DC 18 Religion). Two flame skulls and four shadows attack the characters when they arrive.

3. Treasure for the Foolish

Two braziers burn eternally with continual flame spells. A wooden chest rests by the end of the room. Alas, crea­tures that interact with it trigger the glyph of warding hidden on the lid. Creatures standing 15 feet from the chest takes 6d6 fire damage (DC 15 Dexterity / half).

Fake Vault. A pushable brick reveals a square room with two chests. Both are teleporting traps. Opening either of the chests magically transports the person in front of it to the marked chests in area 8 (DC 14 Cha). The teleporting trap in either chest resets in one hour.

Potion Vault. A glistening vial on a pedestal contains an eternal potion of heroism. The viscous, green, lus­trous liquid within the vial replenishes every 2d4 days.

The two wooden crates in the hall are mutated mimics (they have maxed HP and a +2 bonus to attacks and dam­age). This corridor is a dead end. At the end of this oth­erwise useless corridor is a potion of poison on a plinth.

This chamber features two half-moon-shaped ponds. Their crystalline water is clear and clean. However, strong magic compels living creatures to stare at their reflections in the water (DC 16 Wisdom). Enemies mate­rialize when a character becomes charmed by the ponds.

The bones on the floor move and take the form of four (ghasts) while four shadows coalesce from the dark­ness in the ceiling and attack. The locked gate (DC 20 Thieves’ Tools) opens when all enemies are defeated.

There are pressure-sensitive plates in the middle of both corridors beyond the gate. If the characters fail to spot them, they fall 30 feet onto spikes and take 8d6 piercing damage (DC 17 Dex / half). The archive and cof­fer at the end contain 2,836 gp worth of coins, expensive incense, and foreign spices. A leather cylinder contains four random level 3 and 4 arcane spell scrolls.

The two stone niches do nothing. They are just there to mess with the minds of stressed explorers and make them paranoid. The crystalline font liquid is a clever illu­sion (DC18 Wis). A black pudding attacks anyone who approaches. The same goes for the chests. Characters fall 30 feet onto spikes and take 8d6 piercing damage (DC 17 Dex / half) if they approach the chest illusions.

Two flame skulls, two ghasts, and two shadows impede the characters’ advances here. The crossbow works in the same as the one in area 1. The crates are illusions that hide a second crossbow. All enemies fight until slain.

Approaching the bones on the floor causes them to rean­imate. Four skeletons (ghasts) fight or chase until slain. A +2 ring of protection lies lost among the bones and de­bris in the chamber (DC 18 Investigation).

Teleporting Chests. If the characters trigger any of the teleporting traps in area 3, they are teleported to any of the marked chests in this area (see map).

Vault. The chests contain 3,851 gp worth of coins and fabrics, a potion of resistance, three potions of greater healing, a ring of the ram, and a scimitar of speed.

The sarcophagi open and two flesh golems emerge to stop trespassers from advancing any further. Beyond the sarcophagi, unwanted visitors find themselves before four identical doors; four stone plinths lie before them.

When a creature opens the incorrect door (see map), the stone plinth in front of that door bears a terrible ex­plosion (4d6 bludgeoning damage, DC 14 Dex / half), and a wraith with maxed HP coalesces from the dust.

10. The End of the Labyrinth

The characters succeed and the reward stands before them. Desiré’s magic scroll with the revealing truths of her lifetime research shows the characters the long-sought secret to immortality. A magical door appears be­fore them, a gate to any place in the multiverse.

If one of the characters’ friends was captured by De­siré, they are here. The prisoner is unconscious but they are safe and unharmed (see Adventure Hooks).

Knowledge. The characters do not seek eternal life. They spend hours searching the archives in areas 2 and 5 to retrieve Desiré’s tomes and notes of importance and leave after that. This grant the characters a magical re­ward (a level, an ability, advantage on a skill, or any other appropriate boon(s) as per the GM’s discretion).

Failure. The characters perish while crossing the dun­geon or cannot continue and turn back. They are allowed to exit the same way they entered. Once they leave, how­ever, the teleportation rune pattern changes and they won’t be able to return using this circle of runes again.

Victory. The characters succeed and get what they came for. What will they do with this power? Will they draw unwanted attention? Make enemies while becom­ing immortal? Their immortality could be challenged by the gods! Those are surely adventures for another day… 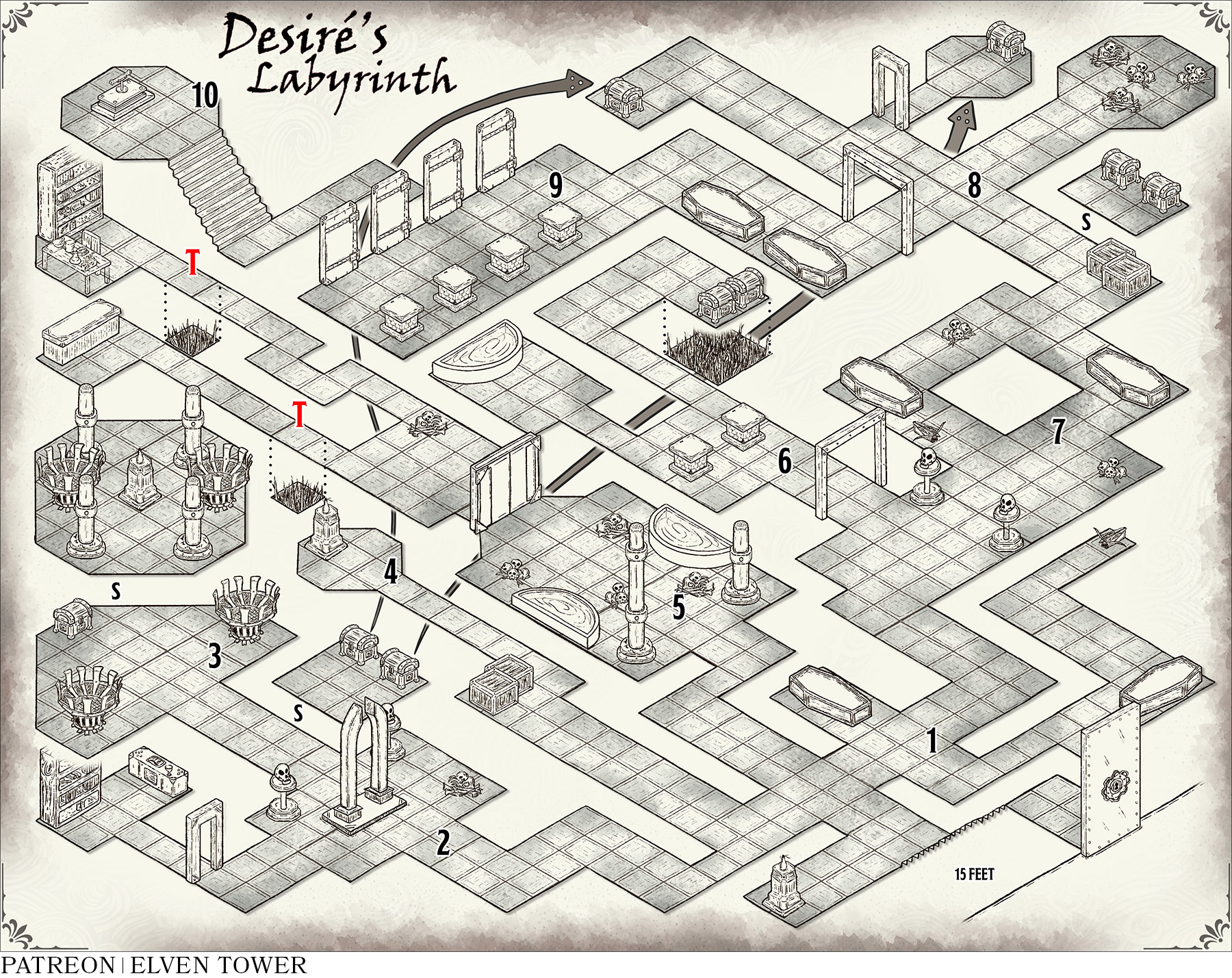