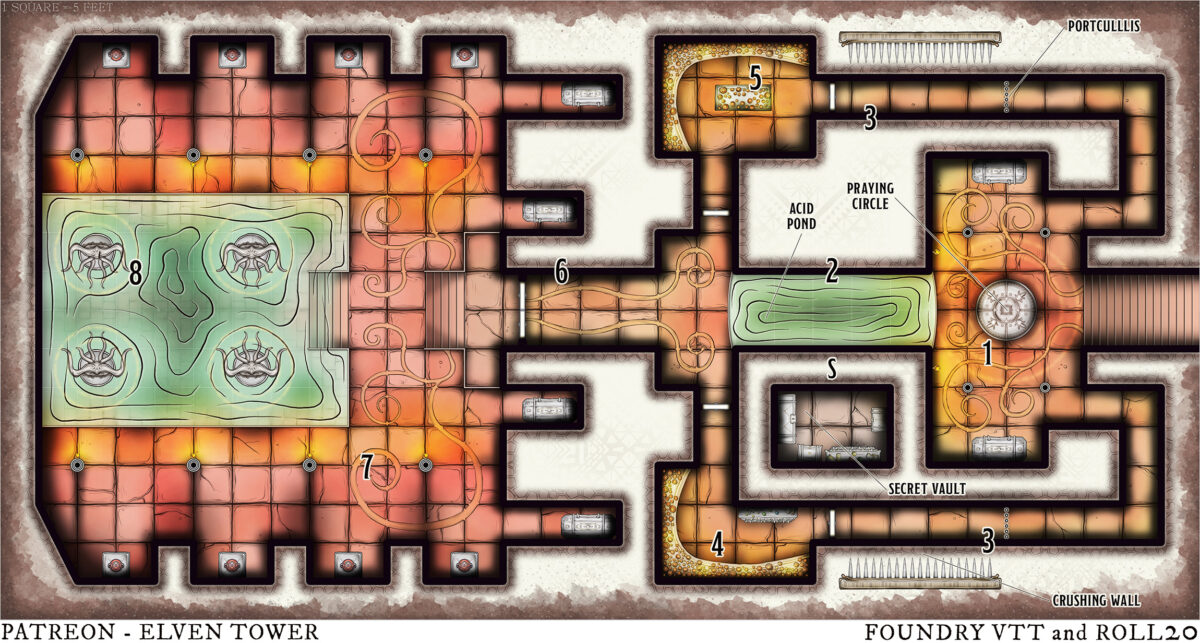 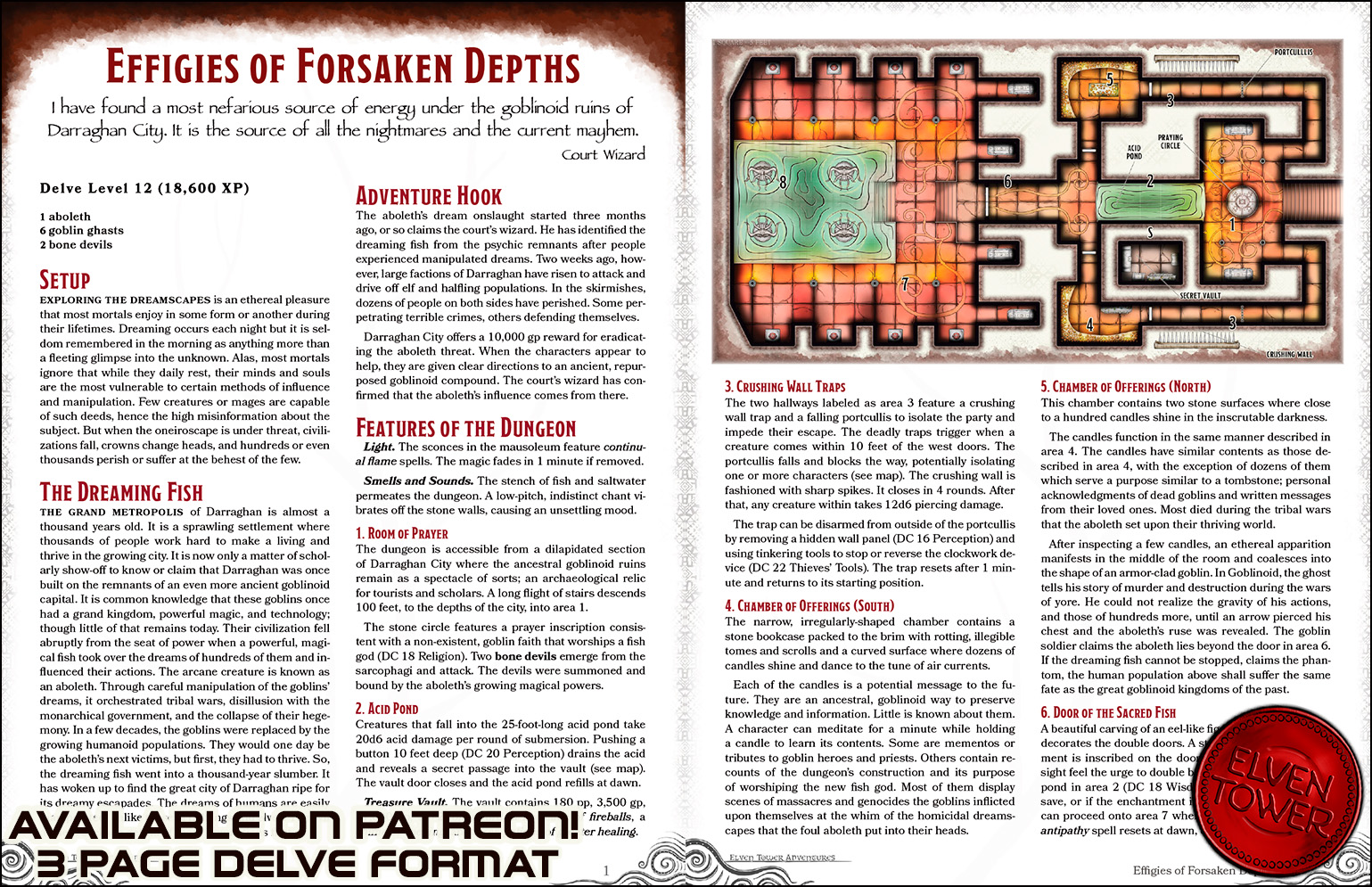 I have found a most nefarious source of energy under the goblinoid ruins of Darraghan City. It is the source of all the nightmares and the current mayhem.

Exploring the dreamscapes is an ethereal pleasure that most mortals enjoy in some form or another during their lifetimes. Dreaming occurs each night but it is sel­dom remembered in the morning as anything more than a fleeting glimpse into the unknown. Alas, most mortals ignore that while they daily rest, their minds and souls are the most vulnerable to certain methods of influence and manipulation. Few creatures or mages are capable of such deeds, hence the high misinformation about the subject. But when the oneiroscape is under threat, civili­zations fall, crowns change heads, and hundreds or even thousands perish or suffer at the behest of the few.

The grand metropolis of Darraghan is almost a thousand years old. It is a sprawling settlement where thousands of people work hard to make a living and thrive in the growing city. It is now only a matter of schol­arly show-off to know or claim that Darraghan was once built on the remnants of an even more ancient goblinoid capital. It is common knowledge that these goblins once had a grand kingdom, powerful magic, and technology; though little of that remains today. Their civilization fell abruptly from the seat of power when a powerful, magi­cal fish took over the dreams of hundreds of them and in­fluenced their actions. The arcane creature is known as an aboleth. Through careful manipulation of the goblins’ dreams, it orchestrated tribal wars, disillusion with the monarchical government, and the collapse of their hege­mony. In a few decades, the goblins were replaced by the growing humanoid populations. They would one day be the aboleth’s next victims, but first, they had to thrive. So, the dreaming fish went into a thousand-year slumber. It has woken up to find the great city of Darraghan ripe for its dreamy escapades. The dreams of humans are easily manipulated, unlike those of halflings and elves. The evil aboleth seeks to get rid of those populations first.

The aboleth’s dream onslaught started three months ago, or so claims the court’s wizard. He has identified the dreaming fish from the psychic remnants after people experienced manipulated dreams. Two weeks ago, how­ever, large factions of Darraghan have risen to attack and drive off elf and halfling populations. In the skirmishes, dozens of people on both sides have perished. Some per­petrating terrible crimes, others defending themselves.

Darraghan City offers a 10,000 gp reward for eradicat­ing the aboleth threat. When the characters appear to help, they are given clear directions to an ancient, repur­posed goblinoid compound. The court’s wizard has con­firmed that the aboleth’s influence comes from there.

Smells and Sounds. The stench of fish and saltwater permeates the dungeon. A low-pitch, indistinct chant vi­brates off the stone walls, causing an unsettling mood.

The dungeon is accessible from a dilapidated section of Darraghan City where the ancestral goblinoid ruins remain as a spectacle of sorts; an archaeological relic for tourists and scholars. A long flight of stairs descends 100 feet, to the depths of the city, into area 1.

The stone circle features a prayer inscription consis­tent with a non-existent, goblin faith that worships a fish god (DC 18 Religion). Two bone devils emerge from the sarcophagi and attack. The devils were summoned and bound by the aboleth’s growing magical powers.

Creatures that fall into the 25-foot-long acid pond take 20d6 acid damage per round of submersion. Pushing a button 10 feet deep (DC 20 Perception) drains the acid and reveals a secret passage into the vault (see map). The vault door closes and the acid pond refills at dawn.

The two hallways labeled as area 3 feature a crushing wall trap and a falling portcullis to isolate the party and impede their escape. The deadly traps trigger when a creature comes within 10 feet of the west doors. The portcullis falls and blocks the way, potentially isolating one or more characters (see map). The crushing wall is fashioned with sharp spikes. It closes in 4 rounds. After that, any creature within takes 12d6 piercing damage.

The trap can be disarmed from outside of the portcullis by removing a hidden wall panel (DC 16 Perception) and using tinkering tools to stop or reverse the clockwork de­vice (DC 22 Thieves’ Tools). The trap resets after 1 min­ute and returns to its starting position.

The narrow, irregularly-shaped chamber contains a stone bookcase packed to the brim with rotting, illegible tomes and scrolls and a curved surface where dozens of candles shine and dance to the tune of air currents.

Each of the candles is a potential message to the fu­ture. They are an ancestral, goblinoid way to preserve knowledge and information. Little is known about them. A character can meditate for a minute while holding a candle to learn its contents. Some are mementos or tributes to goblin heroes and priests. Others contain re­counts of the dungeon’s construction and its purpose of worshiping the new fish god. Most of them display scenes of massacres and genocides the goblins inflicted upon themselves at the whim of the homicidal dreams­capes that the foul aboleth put into their heads.

This chamber contains two stone surfaces where close to a hundred candles shine in the inscrutable darkness.

The candles function in the same manner described in area 4. The candles have similar contents as those de­scribed in area 4, with the exception of dozens of them which serve a purpose similar to a tombstone; personal acknowledgments of dead goblins and written messages from their loved ones. Most died during the tribal wars that the aboleth set upon their thriving world.

After inspecting a few candles, an ethereal apparition manifests in the middle of the room and coalesces into the shape of an armor-clad goblin. In Goblinoid, the ghost tells his story of murder and destruction during the wars of yore. He could not realize the gravity of his actions, and those of hundreds more, until an arrow pierced his chest and the aboleth’s ruse was revealed. The goblin soldier claims the aboleth lies beyond the door in area 6. If the dreaming fish cannot be stopped, claims the phan­tom, the human population above shall suffer the same fate as the great goblinoid kingdoms of the past.

6. Door of the Sacred Fish

A beautiful carving of an eel-like figure chasing the moon decorates the double doors. A strong antipathy enchant­ment is inscribed on the door runes. Creatures within sight feel the urge to double back and jump into the acid pond in area 2 (DC 18 Wisdom save). On a successful save, or if the enchantment is dispelled, the characters can proceed onto area 7 where the aboleth awaits. The antipathy spell resets at dawn, even after dispelled.

7. Hall of the Dream Fish

The grand hall was once the tomb of goblin heroes of war and generals. Four of those generals lie within the sarcophagi in the chamber’s eastern alcoves. After the aboleth took over the goblin kingdoms with its nefarious influence, a large goblin faction started an impromptu religion to worship the strange fish that some of them remembered from their elusive dreams. After a momen­tary surprise, the aboleth was pleased and connected its underground watery lair to the burial hall.

The eight clay vases by the north and south walls con­tain the ashy remains of hundreds of goblins that once served the aboleth after being enslaved by its abilities. They perished away from water and turned to ash.

The aboleth is aware of the characters’ progress through the dungeon. It takes insult to their impertinent approach but remains curious as few have managed to reach this far, even in the old days of the goblinoid kingdoms.

The aberrant fish emerges from the depths below area 8 and awaits menacingly; flanked by the four stone effi­gies that vaguely resemble its fish anatomy. The aboleth communicates telepathically and gauges their physical prowess. It knows the characters are a serious threat to its plans. Hence, it chooses to negotiate. The aboleth claims the status quo shall change soon. If the charac­ters agree to help the aboleth, they shall become the rul­ers of the new hegemony. If the characters refuse, the aboleth summons six mucous-coated, goblin ghasts to fight alongside it, in the 10-foot-deep pond.

The aboleth is a formidable opponent. It uses its Mucous Cloud and Tentacle abilities to inflict its disease on the characters and force them to be in the water where it and the water elementals have the upper hand. The abo­leth targets physically strong warriors with its Enslave ability to charm them and destabilize the party’s efforts.

When the aboleth drops to one-third of its hit points, it attempts to flee down the waterways under the dungeon. If allowed to do so, it is a difficult task to track it down there. The flooded tunnels span hundreds of miles in ev­ery direction. Still, the aboleth plots its revenge and shall not resurface for decades. Either way, the city represen­tatives consider the job done and pay the agreed-upon reward. Darraghan City organizes a feast and a tourna­ment to honor the characters’ valorous deeds.

The characters accepting the aboleth’s bargain is a dan­gerous proposition of uncertain results. It is up to the GM to determine the best outcome for this. The aboleth coats the characters in a mucous membrane that allows them to sleep for 10 years. After this period, they may wake up in mental shackles, under the aboleth’s control. Just a few more of its minions. On the other hand, the aboleth may be sincere and allow the characters to rule over the new world in its stead. What challenges they find in either scenario are adventures for another day… 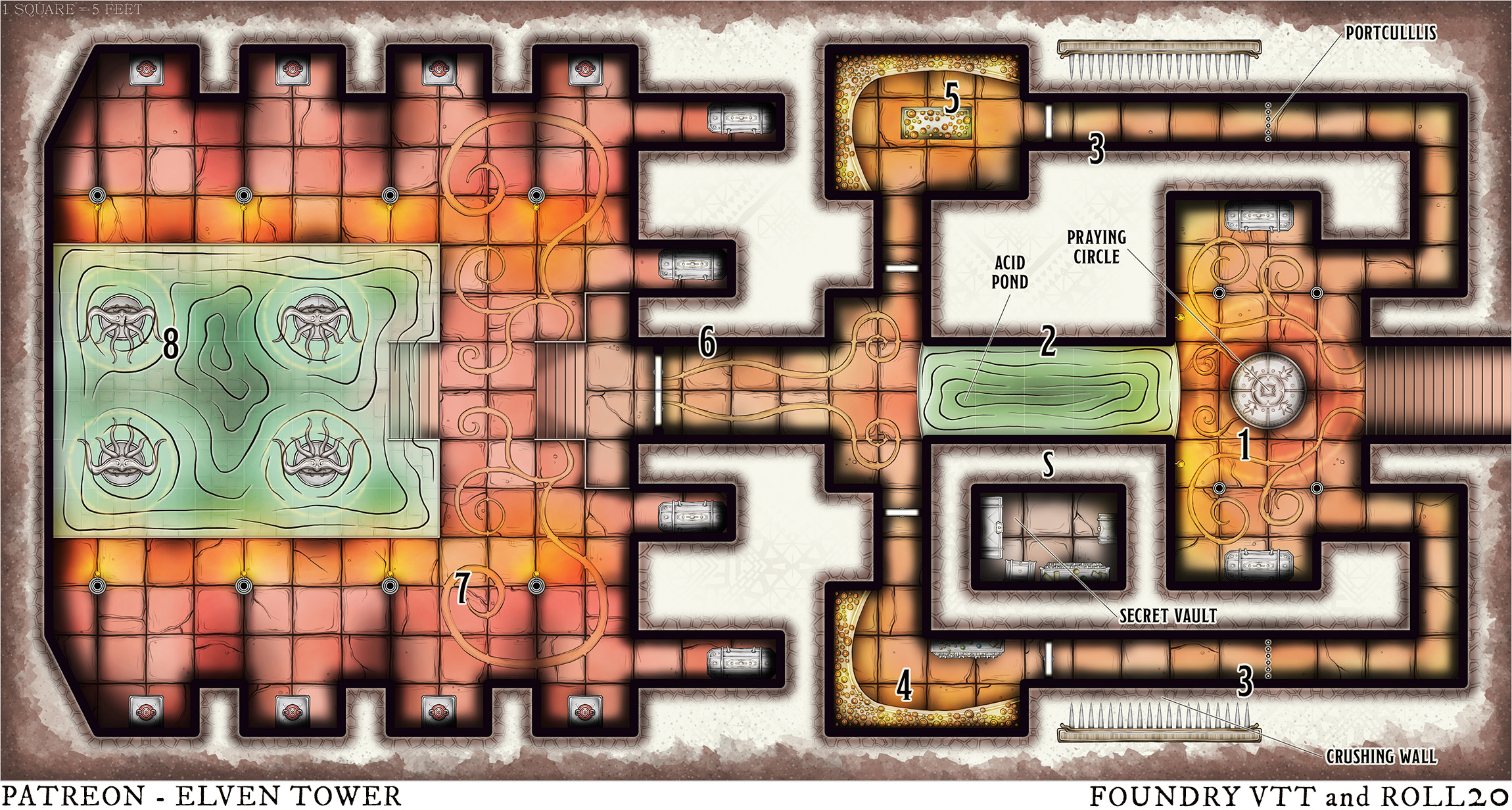