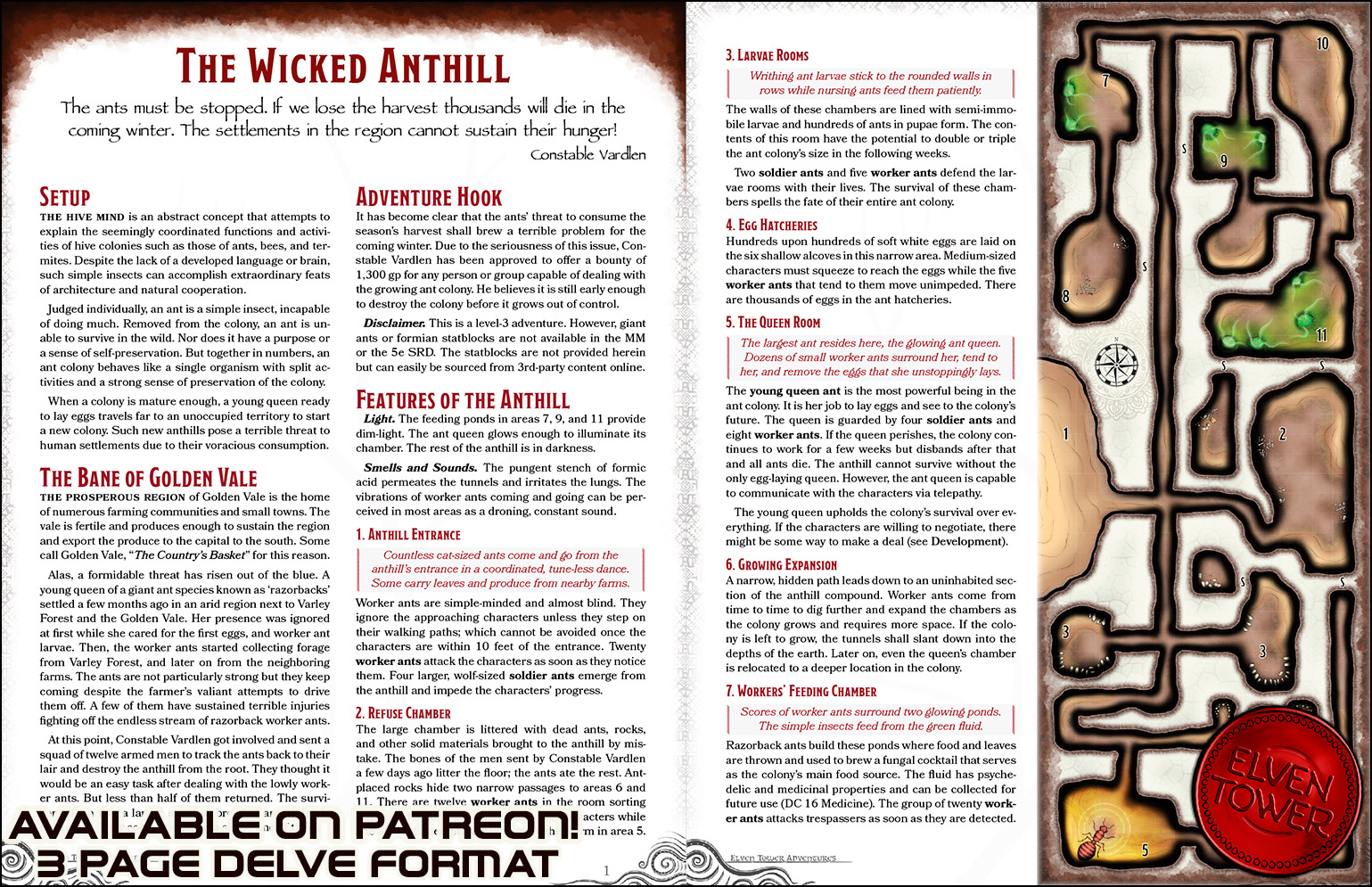 The ants must be stopped. If we lose the harvest thousands will die in the coming winter. The settlements in the region cannot sustain their hunger!

The hive mind is an abstract concept that attempts to explain the seemingly coordinated functions and activi­ties of hive colonies such as those of ants, bees, and ter­mites. Despite the lack of a developed language or brain, such simple insects can accomplish extraordinary feats of architecture and natural cooperation.

Judged individually, an ant is a simple insect, incapable of doing much. Removed from the colony, an ant is un­able to survive in the wild. Nor does it have a purpose or a sense of self-preservation. But together in numbers, an ant colony behaves like a single organism with split ac­tivities and a strong sense of preservation of the colony.

When a colony is mature enough, a young queen ready to lay eggs travels far to an unoccupied territory to start a new colony. Such new anthills pose a terrible threat to human settlements due to their voracious consumption.

The Bane of Golden Vale

The prosperous region of Golden Vale is the home of numerous farming communities and small towns. The vale is fertile and produces enough to sustain the region and export the produce to the capital to the south. Some call Golden Vale, “The Country’s Basket” for this reason.

Alas, a formidable threat has risen out of the blue. A young queen of a giant ant species known as ‘razorbacks’ settled a few months ago in an arid region next to Varley Forest and the Golden Vale. Her presence was ignored at first while she cared for the first eggs, and worker ant larvae. Then, the worker ants started collecting forage from Varley Forest, and later on from the neighboring farms. The ants are not particularly strong but they keep coming despite the farmer’s valiant attempts to drive them off. A few of them have sustained terrible injuries fighting off the endless stream of razorback worker ants.

At this point, Constable Vardlen got involved and sent a squad of twelve armed men to track the ants back to their lair and destroy the anthill from the root. They thought it would be an easy task after dealing with the lowly work­er ants. But less than half of them returned. The survi­vors claim that a larger, stronger breed of ants defends the anthill. They could not defeat a single one of them.

It has become clear that the ants’ threat to consume the season’s harvest shall brew a terrible problem for the coming winter. Due to the seriousness of this issue, Con­stable Vardlen has been approved to offer a bounty of 1,300 gp for any person or group capable of dealing with the growing ant colony. He believes it is still early enough to destroy the colony before it grows out of control.

Features of the Anthill

Light. The feeding ponds in areas 7, 9, and 11 provide dim-light. The ant queen glows enough to illuminate its chamber. The rest of the anthill is in darkness.

Smells and Sounds. The pungent stench of formic acid permeates the tunnels and irritates the lungs. The vibrations of worker ants coming and going can be per­ceived in most areas as a droning, constant sound.

Countless cat-sized ants come and go from the anthill’s entrance in a coordinated, tune-less dance. Some carry leaves and produce from nearby farms.

Worker ants are simple-minded and almost blind. They ignore the approaching characters unless they step on their walking paths; which cannot be avoided once the characters are within 10 feet of the entrance. Twenty worker ants attack the characters as soon as they notice them. Four larger, wolf-sized soldier ants emerge from the anthill and impede the characters’ progress.

The large chamber is littered with dead ants, rocks, and other solid materials brought to the anthill by mis­take. The bones of the men sent by Constable Vardlen a few days ago litter the floor; the ants ate the rest. Ant-placed rocks hide two narrow passages to areas 6 and 11. There are twelve worker ants in the room sorting refuse and other trash. They attack the characters while one of them attempts to flee to raise the alarm in area 5.

Writhing ant larvae stick to the rounded walls in rows while nursing ants feed them patiently.

The walls of these chambers are lined with semi-immo­bile larvae and hundreds of ants in pupae form. The con­tents of this room have the potential to double or triple the ant colony’s size in the following weeks.

Two soldier ants and five worker ants defend the lar­vae rooms with their lives. The survival of these cham­bers spells the fate of their entire ant colony.

Hundreds upon hundreds of soft white eggs are laid on the six shallow alcoves in this narrow area. Medium-sized characters must squeeze to reach the eggs while the five worker ants that tend to them move unimpeded. There are thousands of eggs in the ant hatcheries.

The largest ant resides here, the glowing ant queen. Dozens of small worker ants surround her, tend to her, and remove the eggs that she unstoppingly lays.

The young queen ant is the most powerful being in the ant colony. It is her job to lay eggs and see to the colony’s future. The queen is guarded by four soldier ants and eight worker ants. If the queen perishes, the colony con­tinues to work for a few weeks but disbands after that and all ants die. The anthill cannot survive without the only egg-laying queen. However, the ant queen is capable to communicate with the characters via telepathy.

The young queen upholds the colony’s survival over ev­erything. If the characters are willing to negotiate, there might be some way to make a deal (see Development).

A narrow, hidden path leads down to an uninhabited sec­tion of the anthill compound. Worker ants come from time to time to dig further and expand the chambers as the colony grows and requires more space. If the colo­ny is left to grow, the tunnels shall slant down into the depths of the earth. Later on, even the queen’s chamber is relocated to a deeper location in the colony.

Razorback ants build these ponds where food and leaves are thrown and used to brew a fungal cocktail that serves as the colony’s main food source. The fluid has psyche­delic and medicinal properties and can be collected for future use (DC 16 Medicine). The group of twenty work­er ants attacks trespassers as soon as they are detected.

Razorback ants have a mutualistic relationship with a breed of rat-sized aphids which are used as a secondary source of nourishment. Hundreds of green aphid eggs are embedded in the walls of this chamber. When they hatch, worker ants take them to Varley Forest where they are herded and moved around. The aphids produce a honey-like substance that the ants can consume.

Soldier ants consume ten times more nourishment than small worker ants. Soldier ants come here twice a day to replenish their strength. There are five soldier ants in the chamber when the characters come. They are aware of them from their acute sense of chemical smell.

Contrary to the behavior in other areas, the soldier ants move threateningly and attempt to drive the characters off and toward the anthill’s entrance.

The walls and ceiling of this chamber are littered with small, fist-sized holes that worker ants tend to. Clusters of gray and white material grow from them.

Razorback ants also partake in an ancestral ant activi­ty of foraging for some fungal species, relocating them to the anthill, and then, farming them as a secondary source of food. The fungal fruiting bodies produce a sweet juice when squeezed that the ants can drink.

At any given time, the fungal farm chamber is guarded by two soldier ants and seven worker ants.

The chamber contains four feeding ponds but none of them are mature enough to be used for nourishment. Worker ants care for these ponds and drop eligible sub­stances like plants, leaves, and the flesh of other insects and animals into the ponds to brew a fungal soup. These ponds are not ready yet. They appear almost identical to the ones in areas 7 and 9 except for a distinct smell (DC 17 Perception). In the same manner as area 6, this chamber is an expansion of the colony for the following weeks as pupae in area 3 mature and join the workforce.

If the characters agree to negotiate with the queen in area 5, she claims that the health of her colony is her priority. She can understand that the ravaging of the re­gion’s harvests is a danger to human populations, which she considers also a colony of sorts. If the characters are willing to work as couriers, the queen pledges to redirect the colony’s foraging efforts northward to Varley Forest and beyond, where no farmlands exist. Humans must also stop killing worker ants. If they agree, the queen sprays them with a chemical agent that other ants rec­ognize so other ants do not attack them afterward. This endeavor is not a simple task but Constable Vardlen is willing to give it a try. The reward is held for two weeks to see whether the new plan works or not.

If the characters destroy the ant queen, the ant colony becomes unorganized and quickly disbands. Constable Vardlen is satisfied and pays the promised reward.