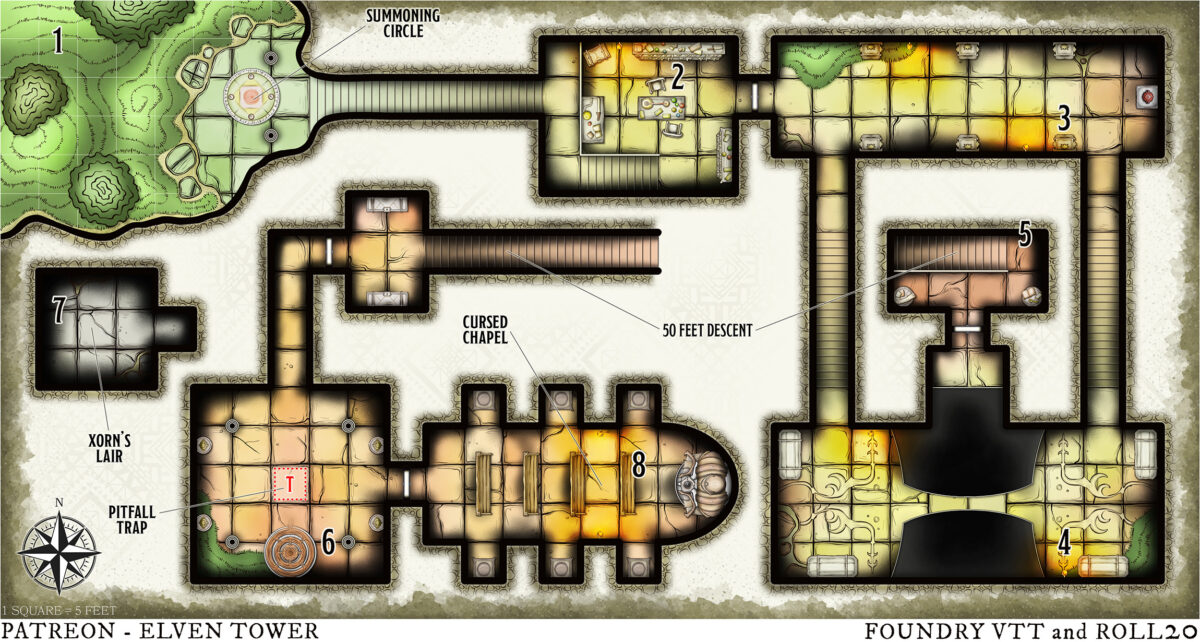 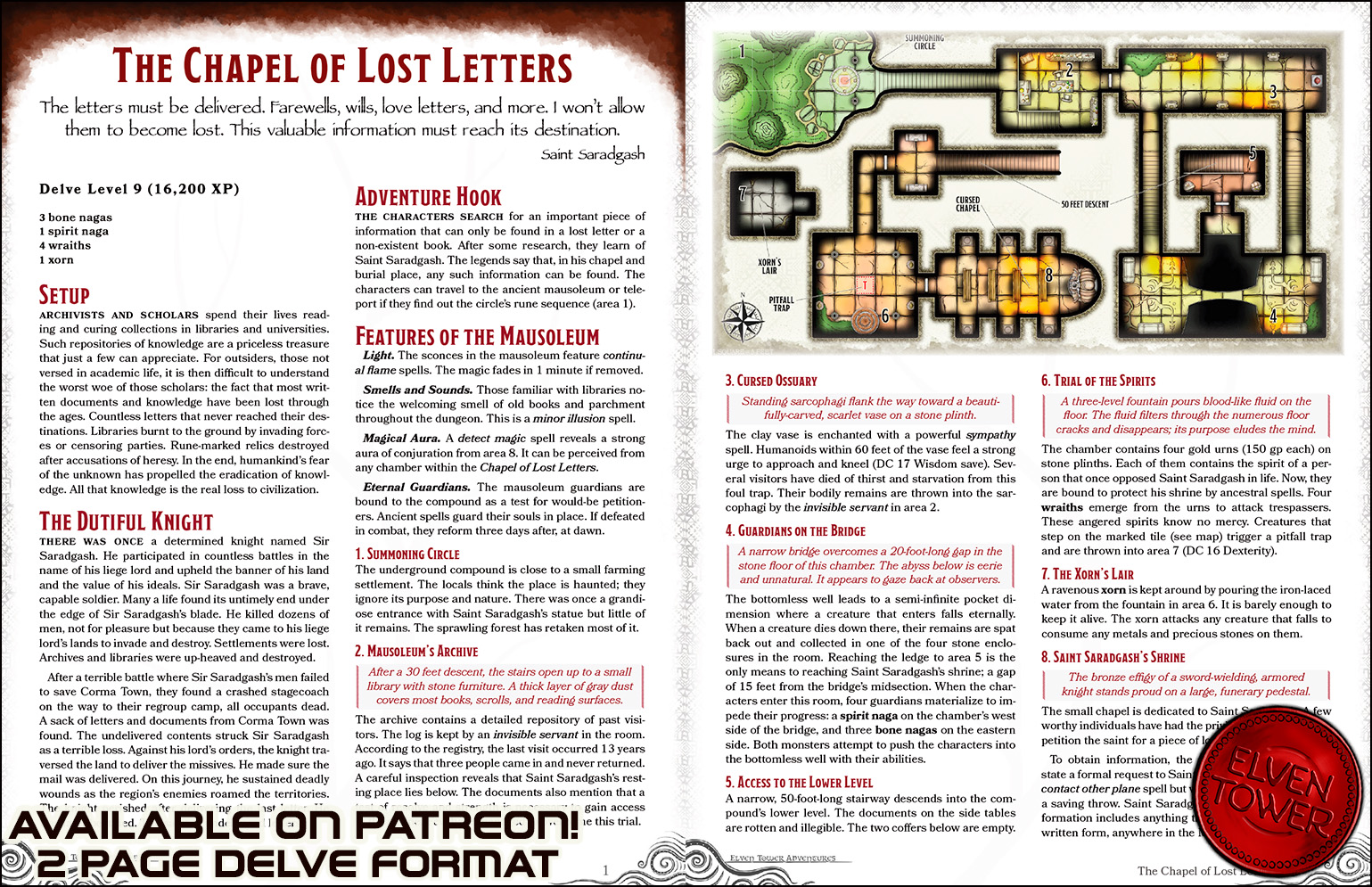 The letters must be delivered. Farewells, wills, love letters, and more. I won’t allow them to become lost. This valuable information must reach its destination.

Archivists and scholars spend their lives read­ing and curing collections in libraries and universities. Such repositories of knowledge are a priceless treasure that just a few can appreciate. For outsiders, those not versed in academic life, it is then difficult to understand the worst woe of those scholars: the fact that most writ­ten documents and knowledge have been lost through the ages. Countless letters that never reached their des­tinations. Libraries burnt to the ground by invading forc­es or censoring parties. Rune-marked relics destroyed after accusations of heresy. In the end, humankind’s fear of the unknown has propelled the eradication of knowl­edge. All that knowledge is the real loss to civilization.

There was once a determined knight named Sir Saradgash. He participated in countless battles in the name of his liege lord and upheld the banner of his land and the value of his ideals. Sir Saradgash was a brave, capable soldier. Many a life found its untimely end under the edge of Sir Saradgash’s blade. He killed dozens of men, not for pleasure but because they came to his liege lord’s lands to invade and destroy. Settlements were lost. Archives and libraries were up-heaved and destroyed.

After a terrible battle where Sir Saradgash’s men failed to save Corma Town, they found a crashed stagecoach on the way to their regroup camp, all occupants dead. A sack of letters and documents from Corma Town was found. The undelivered contents struck Sir Saradgash as a terrible loss. Against his lord’s orders, the knight tra­versed the land to deliver the missives. He made sure the mail was delivered. On this journey, he sustained deadly wounds as the region’s enemies roamed the territories. The knight perished after delivering the last letter. He was later beatified. The saint of undelivered letters.

The characters search for an important piece of information that can only be found in a lost letter or a non-existent book. After some research, they learn of Saint Saradgash. The legends say that, in his chapel and burial place, any such information can be found. The characters can travel to the ancient mausoleum or tele­port if they find out the circle’s rune sequence (area 1).

Smells and Sounds. Those familiar with libraries no­tice the welcoming smell of old books and parchment throughout the dungeon. This is a minor illusion spell.

Magical Aura. A detect magic spell reveals a strong aura of conjuration from area 8. It can be perceived from any chamber within the Chapel of Lost Letters.

Eternal Guardians. The mausoleum guardians are bound to the compound as a test for would-be petition­ers. Ancient spells guard their souls in place. If defeated in combat, they reform three days after, at dawn.

The underground compound is close to a small farming settlement. The locals think the place is haunted; they ignore its purpose and nature. There was once a grandi­ose entrance with Saint Saradgash’s statue but little of it remains. The sprawling forest has retaken most of it.

After a 30 feet descent, the stairs open up to a small library with stone furniture. A thick layer of gray dust covers most books, scrolls, and reading surfaces.

The archive contains a detailed repository of past visi­tors. The log is kept by an invisible servant in the room. According to the registry, the last visit occurred 13 years ago. It says that three people came in and never returned. A careful inspection reveals that Saint Saradgash’s rest­ing place lies below. The documents also mention that a test of resolve and strength is necessary to gain access to the shrine. Few have managed to overcome this trial.

Standing sarcophagi flank the way toward a beauti­fully-carved, scarlet vase on a stone plinth.

The clay vase is enchanted with a powerful sympathy spell. Humanoids within 60 feet of the vase feel a strong urge to approach and kneel (DC 17 Wisdom save). Sev­eral visitors have died of thirst and starvation from this foul trap. Their bodily remains are thrown into the sar­cophagi by the invisible servant in area 2.

4. Guardians on the Bridge

A narrow bridge overcomes a 20-foot-long gap in the stone floor of this chamber. The abyss below is eerie and unnatural. It appears to gaze back at observers.

The bottomless well leads to a semi-infinite pocket di­mension where a creature that enters falls eternally. When a creature dies down there, their remains are spat back out and collected in one of the four stone enclo­sures in the room. Reaching the ledge to area 5 is the only means to reaching Saint Saradgash’s shrine; a gap of 15 feet from the bridge’s midsection. When the char­acters enter this room, four guardians materialize to im­pede their progress: a spirit naga on the chamber’s west side of the bridge, and three bone nagas on the eastern side. Both monsters attempt to push the characters into the bottomless well with their abilities.

A narrow, 50-foot-long stairway descends into the com­pound’s lower level. The documents on the side tables are rotten and illegible. The two coffers below are empty.

6. Trial of the Spirits

A three-level fountain pours blood-like fluid on the floor. The fluid filters through the numerous floor cracks and disappears; its purpose eludes the mind.

The chamber contains four gold urns (150 gp each) on stone plinths. Each of them contains the spirit of a per­son that once opposed Saint Saradgash in life. Now, they are bound to protect his shrine by ancestral spells. Four wraiths emerge from the urns to attack trespassers. These angered spirits know no mercy. Creatures that step on the marked tile (see map) trigger a pitfall trap and are thrown into area 7 (DC 16 Dexterity).

A ravenous xorn is kept around by pouring the iron-laced water from the fountain in area 6. It is barely enough to keep it alive. The xorn attacks any creature that falls to consume any metals and precious stones on them.

The bronze effigy of a sword-wielding, armored knight stands proud on a large, funerary pedestal.

The small chapel is dedicated to Saint Saradgash. A few worthy individuals have had the privilege to stand here to petition the saint for a piece of lost information.

To obtain information, the characters must verbally state a formal request to Saint Saradgash. It works like a contact other plane spell but without the requirement for a saving throw. Saint Saradgash’s scope of available in­formation includes anything that has ever been put into written form, anywhere in the Material Plane. 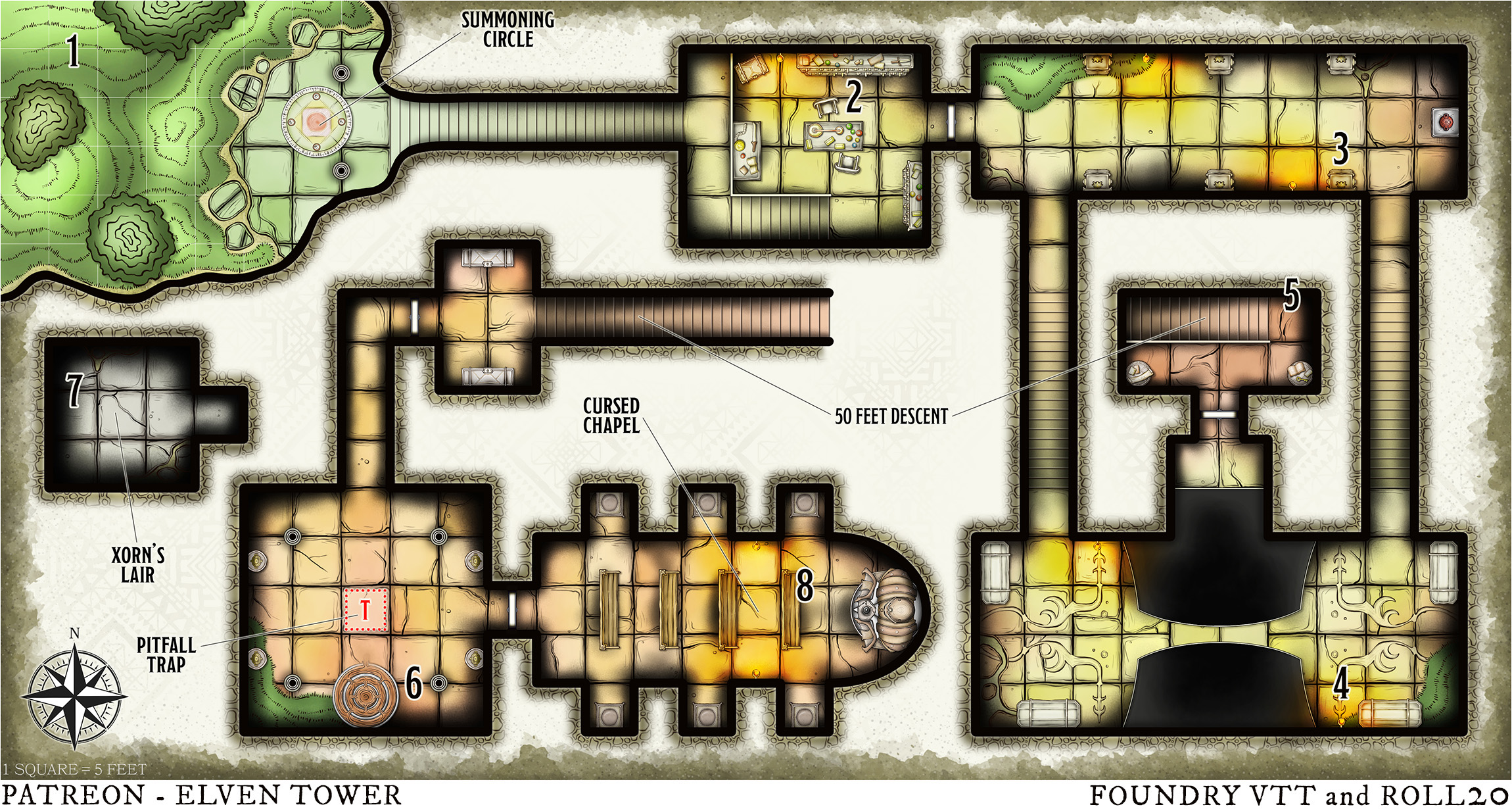