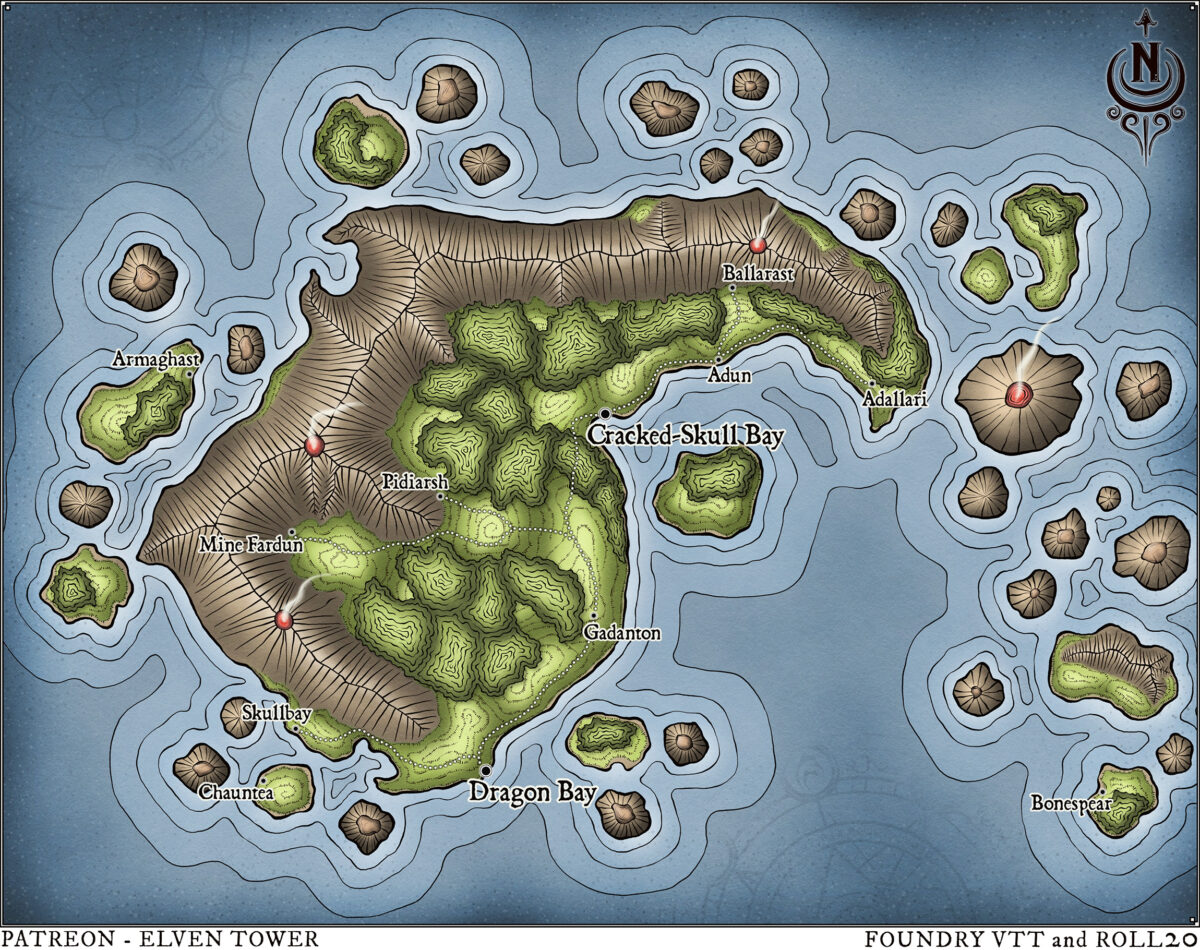 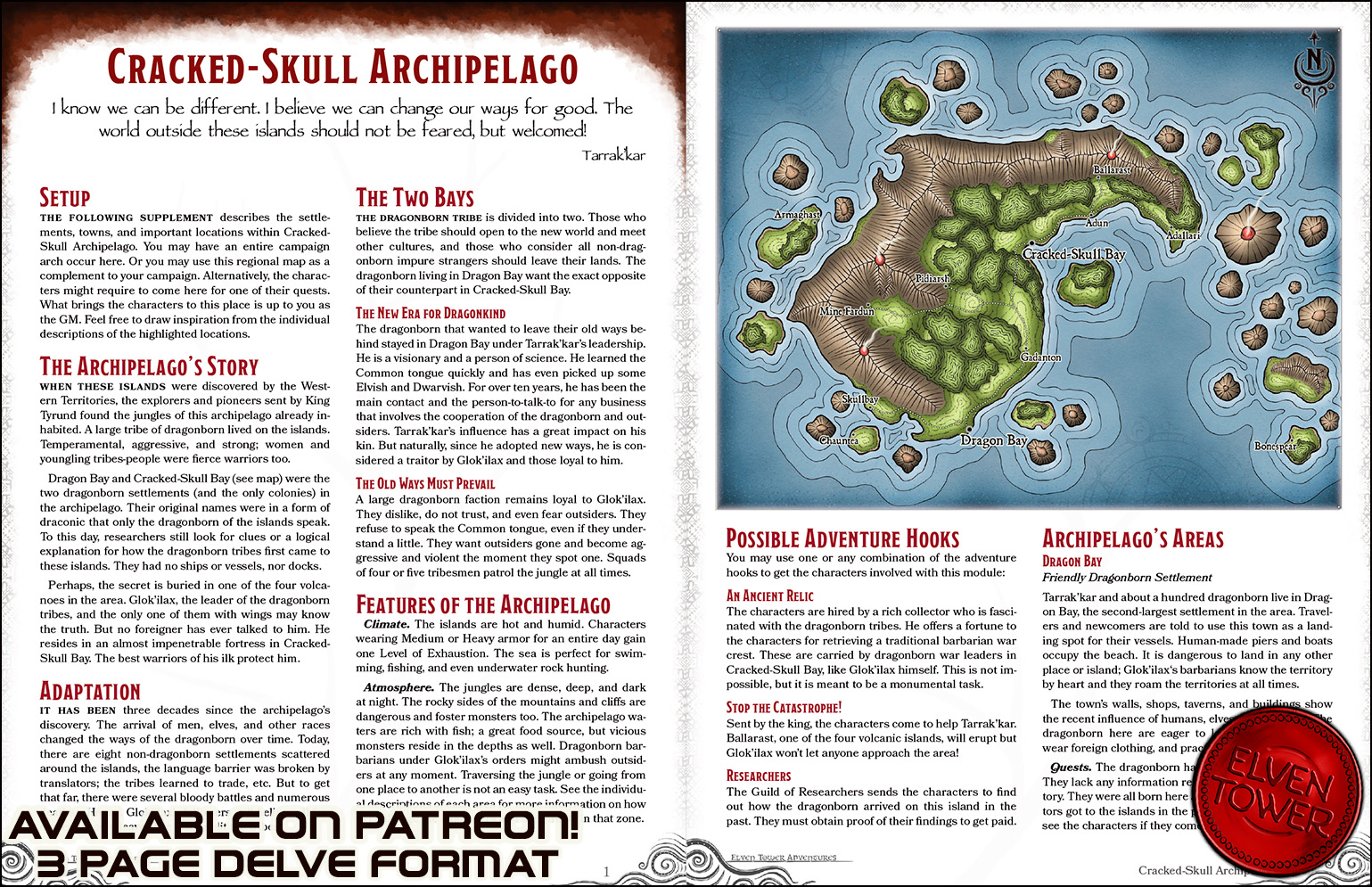 I know we can be different. I believe we can change our ways for good. The world outside these islands should not be feared, but welcomed!

The following supplement describes the settle­ments, towns, and important locations within Cracked- Skull Archipelago. You may have an entire campaign arch occur here. Or you may use this regional map as a complement to your campaign. Alternatively, the charac­ters might require to come here for one of their quests. What brings the characters to this place is up to you as the GM. Feel free to draw inspiration from the individual descriptions of the highlighted locations.

When these islands were discovered by the West­ern Territories, the explorers and pioneers sent by King Tyrund found the jungles of this archipelago already in­habited. A large tribe of dragonborn lived on the islands. Temperamental, aggressive, and strong; women and youngling tribes-people were fierce warriors too.

Dragon Bay and Cracked-Skull Bay (see map) were the two dragonborn settlements (and the only colonies) in the archipelago. Their original names were in a form of draconic that only the dragonborn of the islands speak. To this day, researchers still look for clues or a logical explanation for how the dragonborn tribes first came to these islands. They had no ships or vessels, nor docks.

Perhaps, the secret is buried in one of the four volca­noes in the area. Glok’ilax, the leader of the dragonborn tribes, and the only one of them with wings may know the truth. But no foreigner has ever talked to him. He resides in an almost impenetrable fortress in Cracked- Skull Bay. The best warriors of his ilk protect him.

It has been three decades since the archipelago’s discovery. The arrival of men, elves, and other races changed the ways of the dragonborn over time. Today, there are eight non-dragonborn settlements scattered around the islands, the language barrier was broken by translators; the tribes learned to trade, etc. But to get that far, there were several bloody battles and numerous deaths… Hence, Glok’ilax’s followers still believe all for­eigners should leave. The issue split the tribes.

The dragonborn tribe is divided into two. Those who believe the tribe should open to the new world and meet other cultures, and those who consider all non-drag­onborn impure strangers should leave their lands. The dragonborn living in Dragon Bay want the exact opposite of their counterpart in Cracked-Skull Bay.

The New Era for Dragonkind

The dragonborn that wanted to leave their old ways be­hind stayed in Dragon Bay under Tarrak’kar’s leadership. He is a visionary and a person of science. He learned the Common tongue quickly and has even picked up some Elvish and Dwarvish. For over ten years, he has been the main contact and the person-to-talk-to for any business that involves the cooperation of the dragonborn and out­siders. Tarrak’kar’s influence has a great impact on his kin. But naturally, since he adopted new ways, he is con­sidered a traitor by Glok’ilax and those loyal to him.

The Old Ways Must Prevail

A large dragonborn faction remains loyal to Glok’ilax. They dislike, do not trust, and even fear outsiders. They refuse to speak the Common tongue, even if they under­stand a little. They want outsiders gone and become ag­gressive and violent the moment they spot one. Squads of four or five tribesmen patrol the jungle at all times.

Features of the Archipelago

Climate. The islands are hot and humid. Characters wearing Medium or Heavy armor for an entire day gain one Level of Exhaustion. The sea is perfect for swim­ming, fishing, and even underwater rock hunting.

Atmosphere. The jungles are dense, deep, and dark at night. The rocky sides of the mountains and cliffs are dangerous and foster monsters too. The archipelago wa­ters are rich with fish; a great food source, but vicious monsters reside in the depths as well. Dragonborn bar­barians under Glok’ilax’s orders might ambush outsid­ers at any moment. Traversing the jungle or going from one place to another is not an easy task. See the individu­al descriptions of each area for more information on how to challenge the characters and the threats in that zone.

You may use one or any combination of the adventure hooks to get the characters involved with this module:

The characters are hired by a rich collector who is fasci­nated with the dragonborn tribes. He offers a fortune to the characters for retrieving a traditional barbarian war crest. These are carried by dragonborn war leaders in Cracked-Skull Bay, like Glok’ilax himself. This is not im­possible, but it is meant to be a monumental task.

Sent by the king, the characters come to help Tarrak’kar. Ballarast, one of the four volcanic islands, will erupt but Glok’ilax won’t let anyone approach the area!

The Guild of Researchers sends the characters to find out how the dragonborn arrived on this island in the past. They must obtain proof of their findings to get paid.

Tarrak’kar and about a hundred dragonborn live in Drag­on Bay, the second-largest settlement in the area. Travel­ers and newcomers are told to use this town as a land­ing spot for their vessels. Human-made piers and boats occupy the beach. It is dangerous to land in any other place or island; Glok’ilax‘s barbarians know the territory by heart and they roam the territories at all times.

The town’s walls, shops, taverns, and buildings show the recent influence of humans, elves, and dwarves. The dragonborn here are eager to learn other languages, wear foreign clothing, and practice foreign traditions.

Quests. The dragonborn have no barbarian war crest. They lack any information regarding their ancestral his­tory. They were all born here and ignore how their ances­tors got to the islands in the past. Tarrak’kar is happy to see the characters if they come to help with the volcano.

The largest settlement in the Archipelago earned its name three decades ago, when the islands were discov­ered, long before humans met Tarrak’kar and formed an alliance with some of the dragonborn. The scaled bar­barians are known to lift their already-defeated enemies by the head and smash their skulls against rocks, the ground, or even their skulls. It caused such an impact on the Western Territories’ pioneers that the entire archi­pelago was named after the foul practice.

Only Glok’ilax and his tribe call their town by its origi­nal draconic name. To the rest, this is Cracked-Skull Bay, a fortress built on a bog, surrounded by palisade walls, hidden traps, and camouflaged tribe warriors. Count­less, endless rows of wooden spikes hold the cracked skulls of their enemies in a grim spectacle of cruelty.

Enemies. The tribe’s weakest links are scouts, thugs, and spies. Their toughest warriors are berserkers and gladiators. Some of them have barbarian levels. Glok’ilax is not only one of the strongest, but he is also a shaman-barbarian of incredible power. He remains the only winged dragonborn in the entire region.

Quests. The characters must fight and make their way through Glok’ilax ranks if they wish to obtain the tribe leader’s barbarian crest. Also, finding the truth about the dragonborn’s history requires speaking face-to-face with Glok’ilax. But what could make the leader talk?

The characters may learn the tribe’s history by inves­tigating their paintings, possessions, and the land itself too. The GM is free to elaborate on these findings.

These three locations are occupied by Glok’ilax barbar­ians. The presence of outsiders forced them to expand, and take more territory. Outsiders are attacked on sight.

Quests. The volcano will erupt because Glok’ilax cult­ists are performing rituals to corrupt the magma. The characters must take over Ballarast to deal with this.

Humans built Bonespear to facilitate the storage and transportation of all their goods. Armaghast is for the same purpose but it is mostly used to store valuables.

Dwarves wanted no quarrel with anyone and got to work the moment they stepped on the islands. All their goods pass through Dragon Bay before being shipped out.

This settlement is often attacked because it works as an outpost for Dragon Bay. Elves and dwarves make busi­ness here and protect this location for their benefit.

Skullbay is an expansion to Dragon Bay. From there, dragonborn move toward Chauntea, where a hidden op­eration helps them travel to the Western Territories. 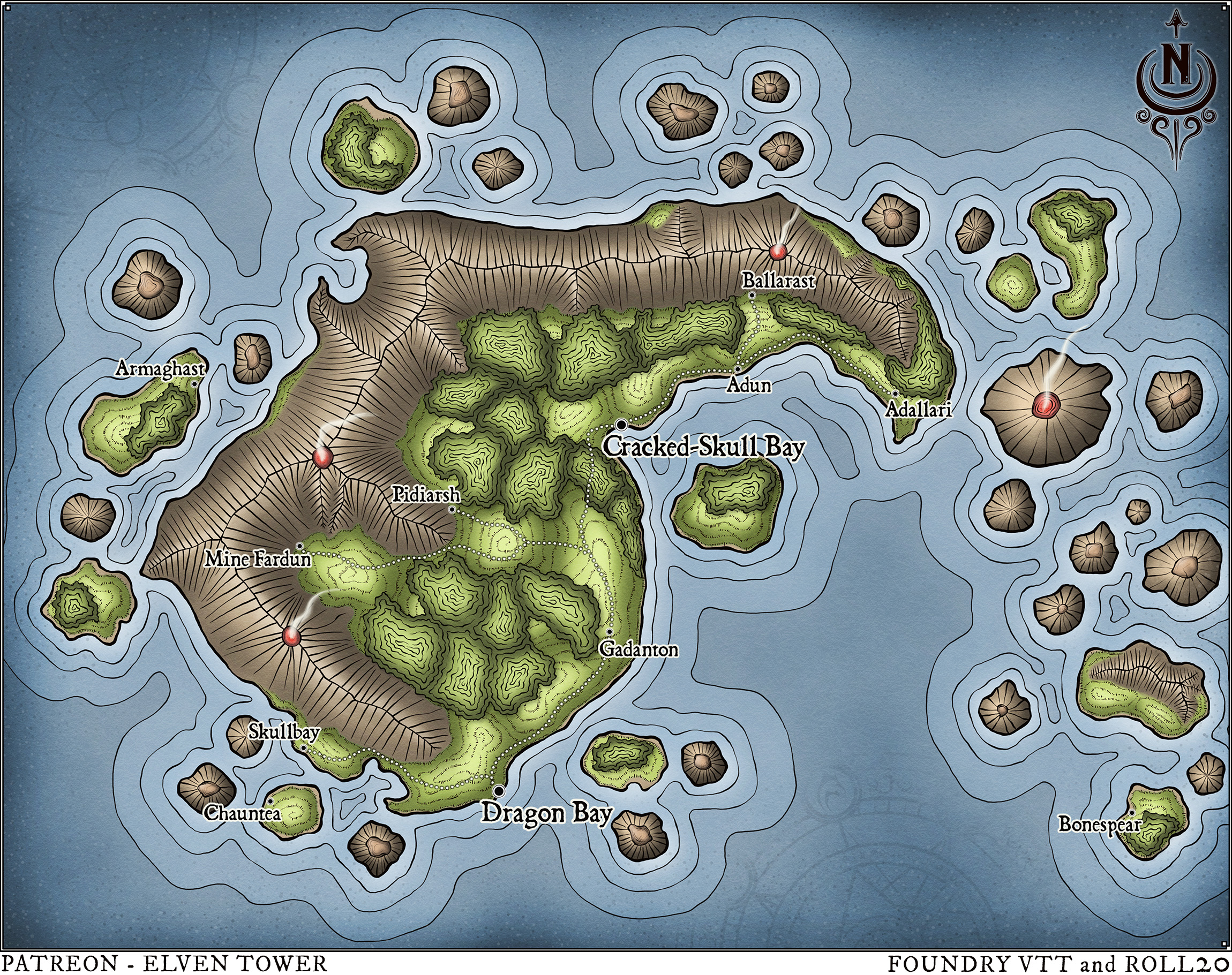