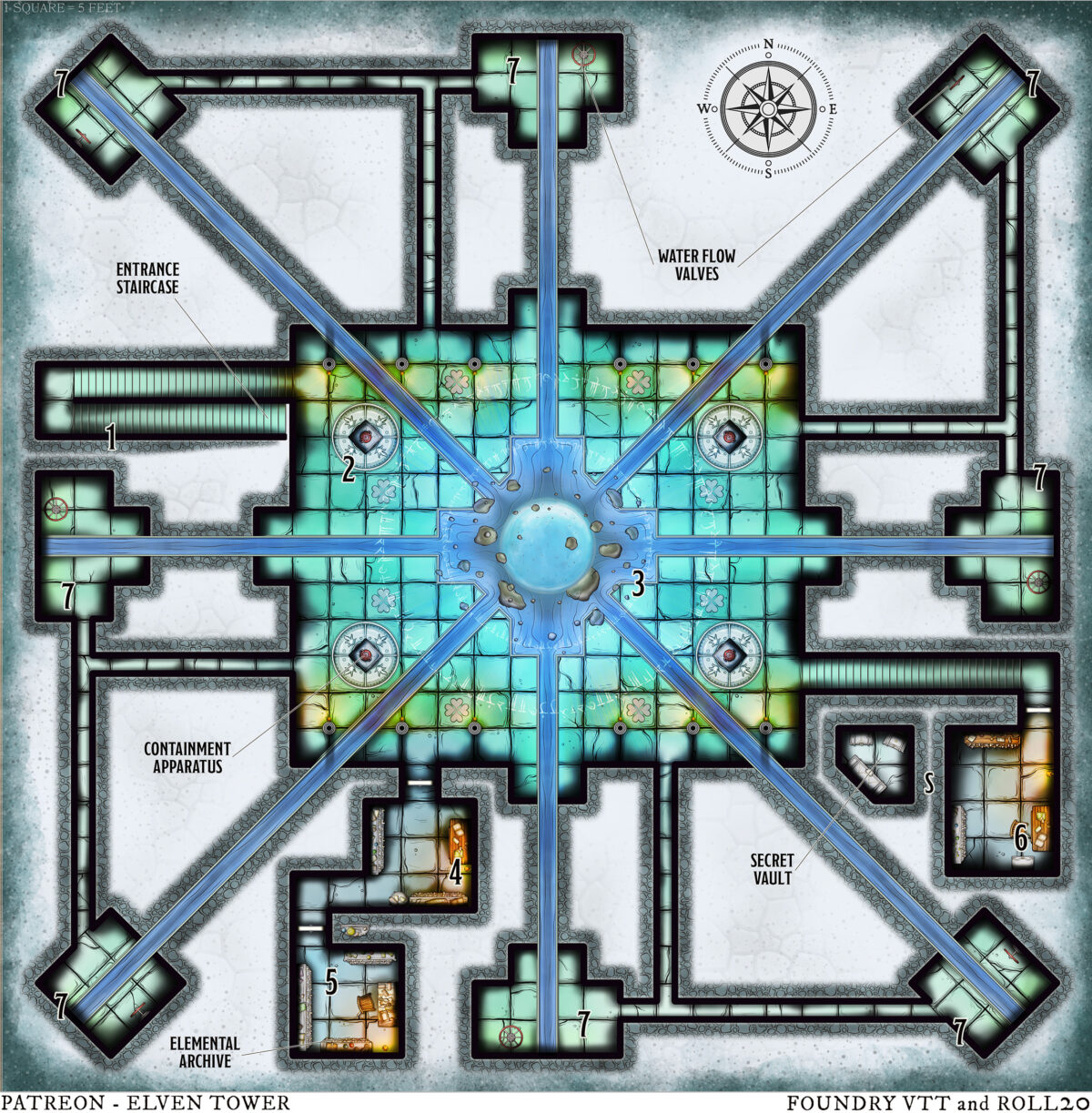 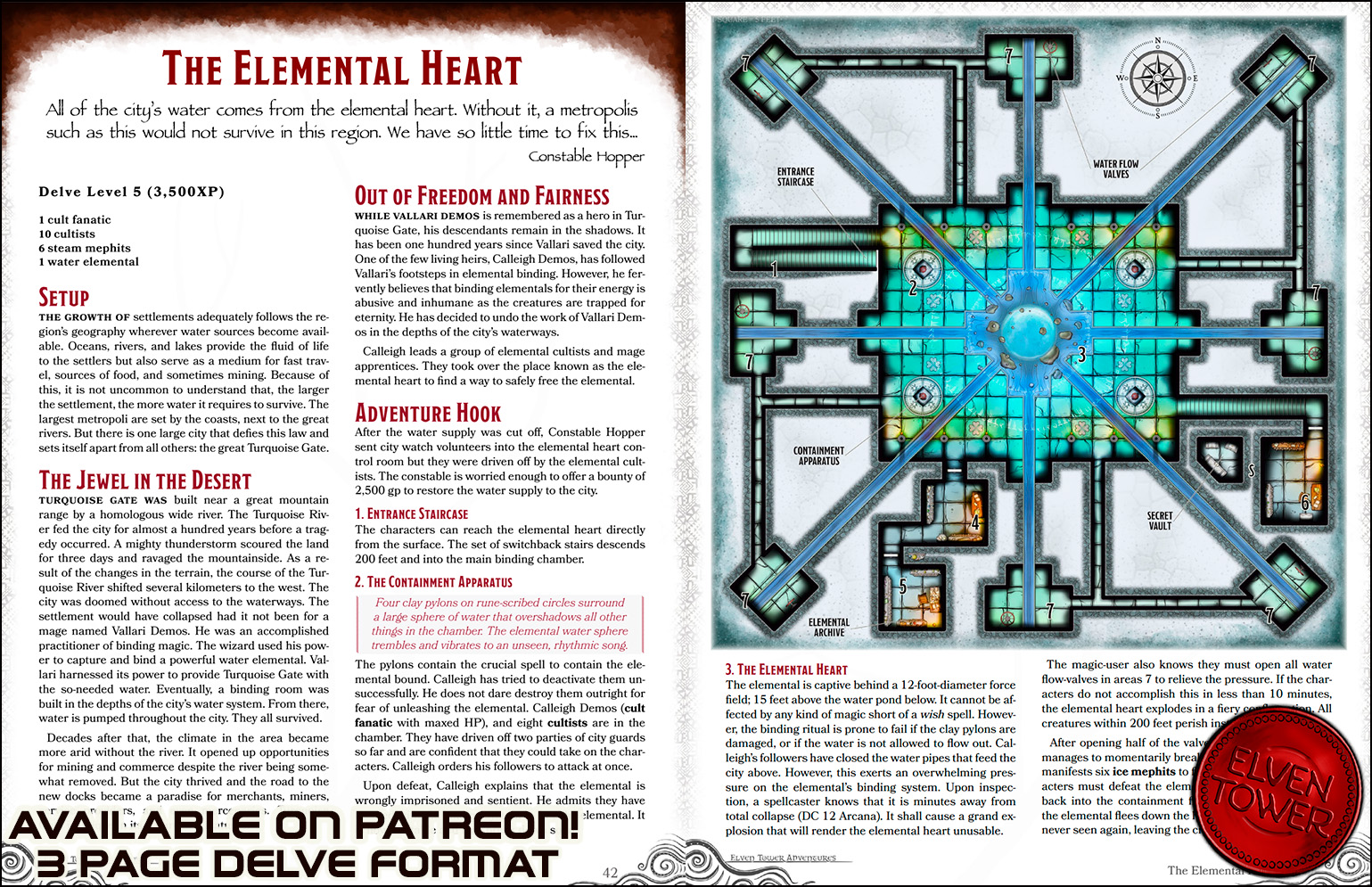 All of the city’s water comes from the elemental heart. Without it, a metropolis such as this would not survive in this region. We have so little time to fix this…

The growth of settlements adequately follows the re­gion’s geography wherever water sources become avail­able. Oceans, rivers, and lakes provide the fluid of life to the settlers but also serve as a medium for fast trav­el, sources of food, and sometimes mining. Because of this, it is not uncommon to understand that, the larger the settlement, the more water it requires to survive. The largest metropoli are set by the coasts, next to the great rivers. But there is one large city that defies this law and sets itself apart from all others: the great Turquoise Gate.

The Jewel in the Desert

Turquoise Gate was built near a great mountain range by a homologous wide river. The Turquoise Riv­er fed the city for almost a hundred years before a trag­edy occurred. A mighty thunderstorm scoured the land for three days and ravaged the mountainside. As a re­sult of the changes in the terrain, the course of the Tur­quoise River shifted several kilometers to the west. The city was doomed without access to the waterways. The settlement would have collapsed had it not been for a mage named Vallari Demos. He was an accomplished practitioner of binding magic. The wizard used his pow­er to capture and bind a powerful water elemental. Val­lari harnessed its power to provide Turquoise Gate with the so-needed water. Eventually, a binding room was built in the depths of the city’s water system. From there, water is pumped throughout the city. They all survived.

Decades after that, the climate in the area became more arid without the river. It opened up opportunities for mining and commerce despite the river being some­what removed. But the city thrived and the road to the new docks became a paradise for merchants, miners, service providers, and even mercenaries. Turquoise Gate is unique in its nature and features.

Out of Freedom and Fairness

While Vallari Demos is remembered as a hero in Tur­quoise Gate, his descendants remain in the shadows. It has been one hundred years since Vallari saved the city. One of the few living heirs, Calleigh Demos, has followed Vallari’s footsteps in elemental binding. However, he fer­vently believes that binding elementals for their energy is abusive and inhumane as the creatures are trapped for eternity. He has decided to undo the work of Vallari Dem­os in the depths of the city’s waterways.

Calleigh leads a group of elemental cultists and mage apprentices. They took over the place known as the ele­mental heart to find a way to safely free the elemental.

The characters can reach the elemental heart directly from the surface. The set of switchback stairs descends 200 feet and into the main binding chamber.

Four clay pylons on rune-scribed circles surround a large sphere of water that overshadows all other things in the chamber. The elemental water sphere trembles and vibrates to an unseen, rhythmic song.

The pylons contain the crucial spell to contain the ele­mental bound. Calleigh has tried to deactivate them un­successfully. He does not dare destroy them outright for fear of unleashing the elemental. Calleigh Demos (cult fanatic with maxed HP), and eight cultists are in the chamber. They have driven off two parties of city guards so far and are confident that they could take on the char­acters. Calleigh orders his followers to attack at once.

Upon defeat, Calleigh explains that the elemental is wrongly imprisoned and sentient. He admits they have messed with the binding system to free the elemental. It is now unstable and may break down soon.

The elemental is captive behind a 12-foot-diameter force field; 15 feet above the water pond below. It cannot be af­fected by any kind of magic short of a wish spell. Howev­er, the binding ritual is prone to fail if the clay pylons are damaged, or if the water is not allowed to flow out. Cal­leigh’s followers have closed the water pipes that feed the city above. However, this exerts an overwhelming pres­sure on the elemental’s binding system. Upon inspec­tion, a spellcaster knows that it is minutes away from total collapse (DC 12 Arcana). It shall cause a grand ex­plosion that will render the elemental heart unusable.

The magic-user also knows they must open all water flow-valves in areas 7 to relieve the pressure. If the char­acters do not accomplish this in less than 10 minutes, the elemental heart explodes in a fiery conflagration. All creatures within 200 feet perish instantly.

After opening half of the valves, the water elemental manages to momentarily break through the forcefield. It manifests six ice mephits to fight alongside it. The char­acters must defeat the elemental in combat to force it back into the containment field. If the characters fail, the elemental flees down the half-open waterways and is never seen again, leaving the city without a water supply.

The small room contains two bookcases and a wooden desk. A portrait of Vallari Demos, the hero of Turquoise Gate hangs on over the crammed desk.

Two cultists are in the room. Their names are Kaden and Sara. Calleigh ordered them to come to this library and take all documents, scrolls, and keepsakes of Valleri Demos, and then burn them so it is all forgotten and no one can replicate the elemental binding later on.

They began obediently but faltered after retrieving half the documents. While sympathetic to Calleigh’s ideals, they know that Turquoise Gate shall collapse if they con­tinue. They are willing to join the party if the characters agree to restore the elemental heart to function.

The stone walls in this archive are carved in the flow­ing shape of water waves and swift currents. They appear to move in the magic, warm, sconce light.

The chamber contains a dense repository of knowledge about elemental creatures, binding rituals, and the na­ture of the planes. The characters can consult this library for matters related to those subjects. This collection was amassed (and partly written) by Valleri Demos during his lifetime. They were kept here to honor his memory and to keep the information where it may be needed.

This is the main office for maintenance workers who work in the elemental heart chamber and other nearby underground areas. The bookcases contain worker hour logs, receipts for all manner of expenses, and requisition lists for the higher-ups in Turquoise Gate. From the em­ployee logs, the characters can learn that one of the cult­ists in area 2 is a city employee named Karn. He gave Calleigh access to this chamber a few days ago.

Each of these eight rooms contains a water canal that flows from the elemental heart to the city above. When the valve is open, water flows at great speed and is pumped up to the districts above. All of the valves are closed when the characters reach them.

When the water elemental momentarily frees itself as described in area 3, it utters terrible curses and insults in its native tongue, Aquan. It speaks of the suffering and anxiety of captivity after more than a hundred years of being imprisoned by renowned hero Vallari Demos.

The elemental does so while fighting, it doesn’t care for being understood. Whether the characters react to this or make an attempt to understand is up to them.

Reopening the flow valves restores the city’s water sup­ply and allows the containment field to work as intend­ed. Constable Hopper pays the agreed-upon reward and lets the characters know that a festival is in the works to thank them for their valuable service to Turquoise City.

The consequences of allowing the elemental to escape or helping Calleigh are dire for Turquoise Gate. Thou­sands may die, but that is an adventure for another day…

Light. Some areas feature sconces with continual flame spells. If removed, the magic fades in 1 minute. The elemental heart provides dim-light around it.

Smells and Sounds. The sound of water crashing and moving is ever-present in the underground compound. The elemental heart carries the strength of the sea.

Magical Aura. A detect magic spell reveals a strong aura of abjuration coming from the elemental heart. The aura can be perceived from any chamber. Each of the binding pylons in area 2 radiates a similar aura. 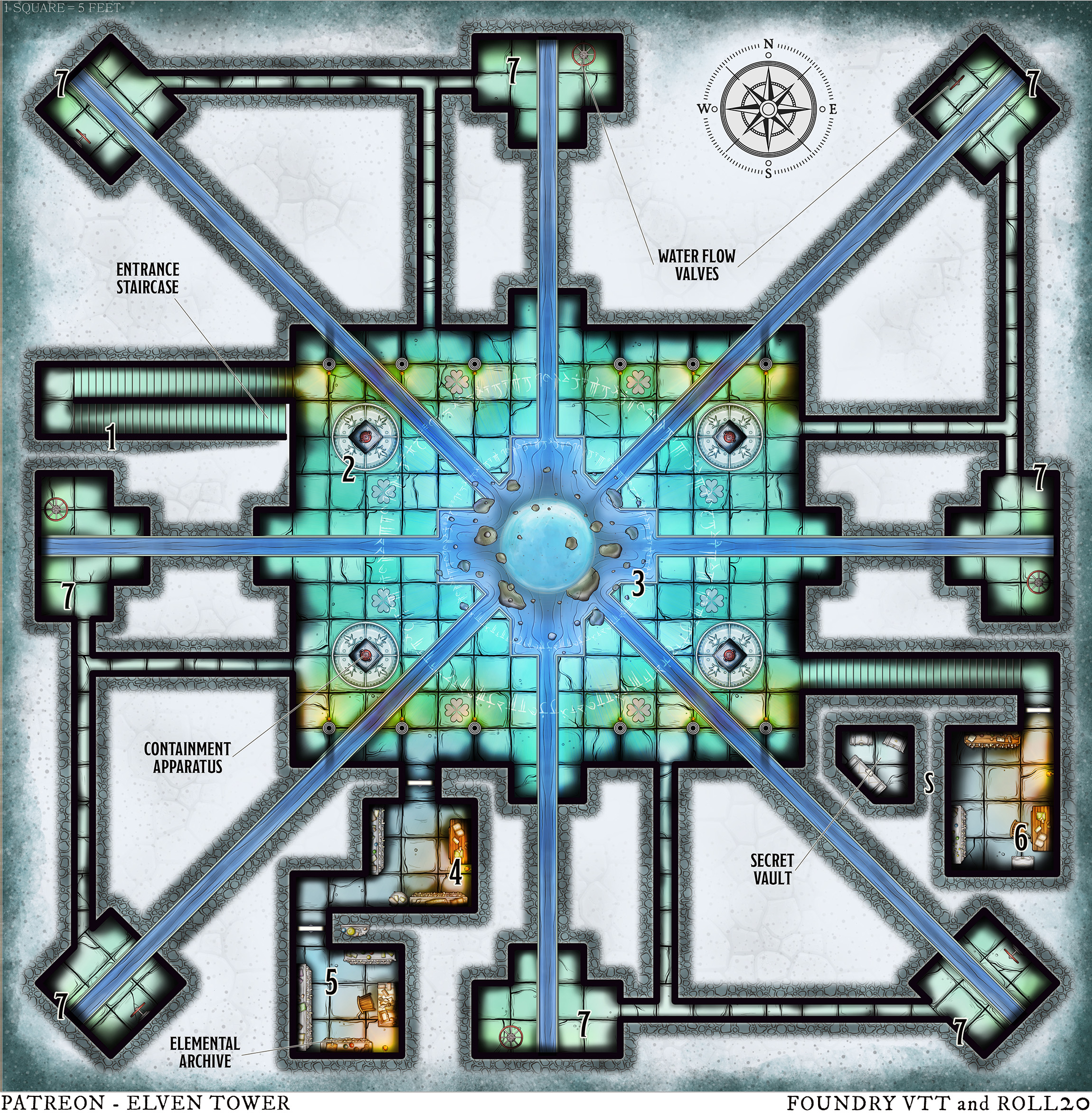