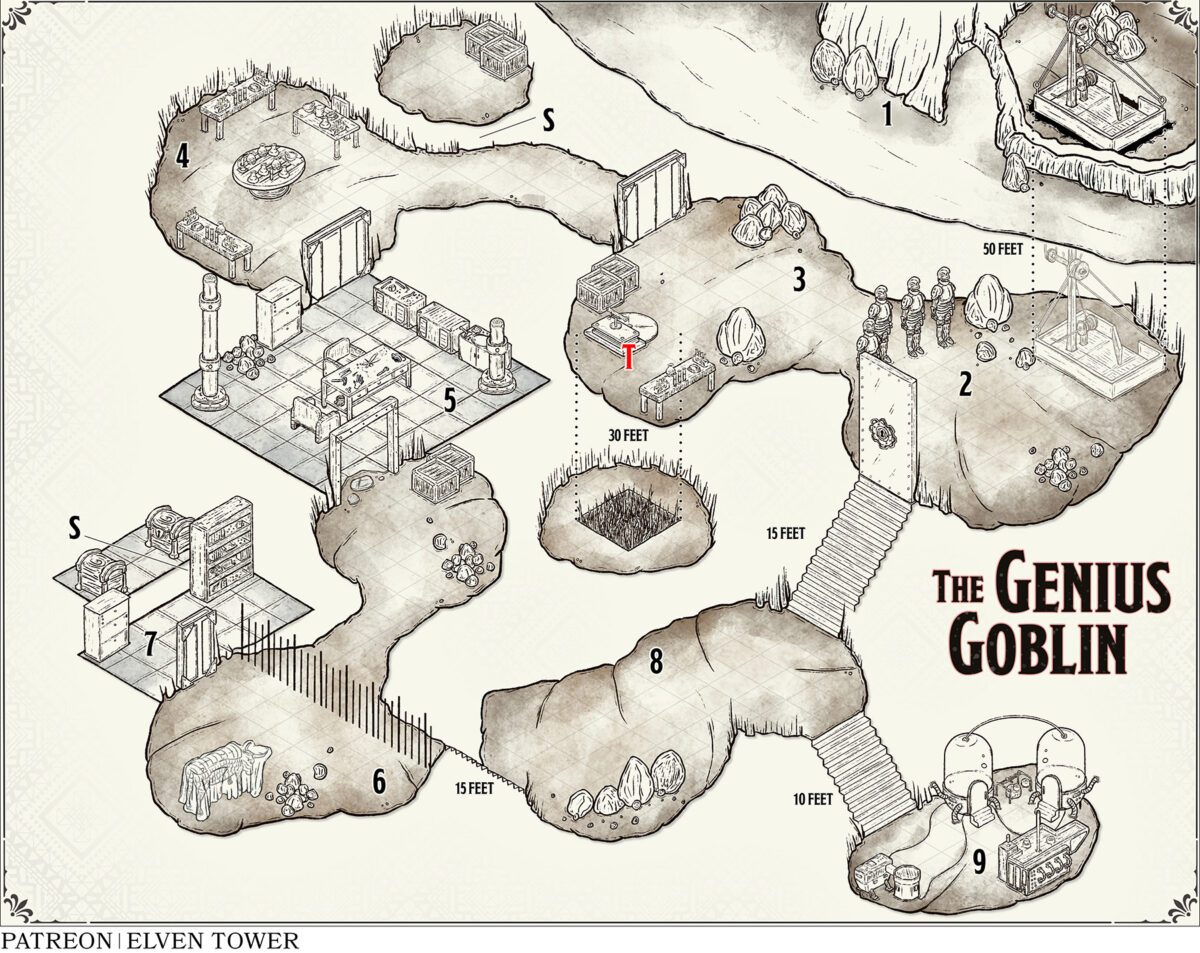 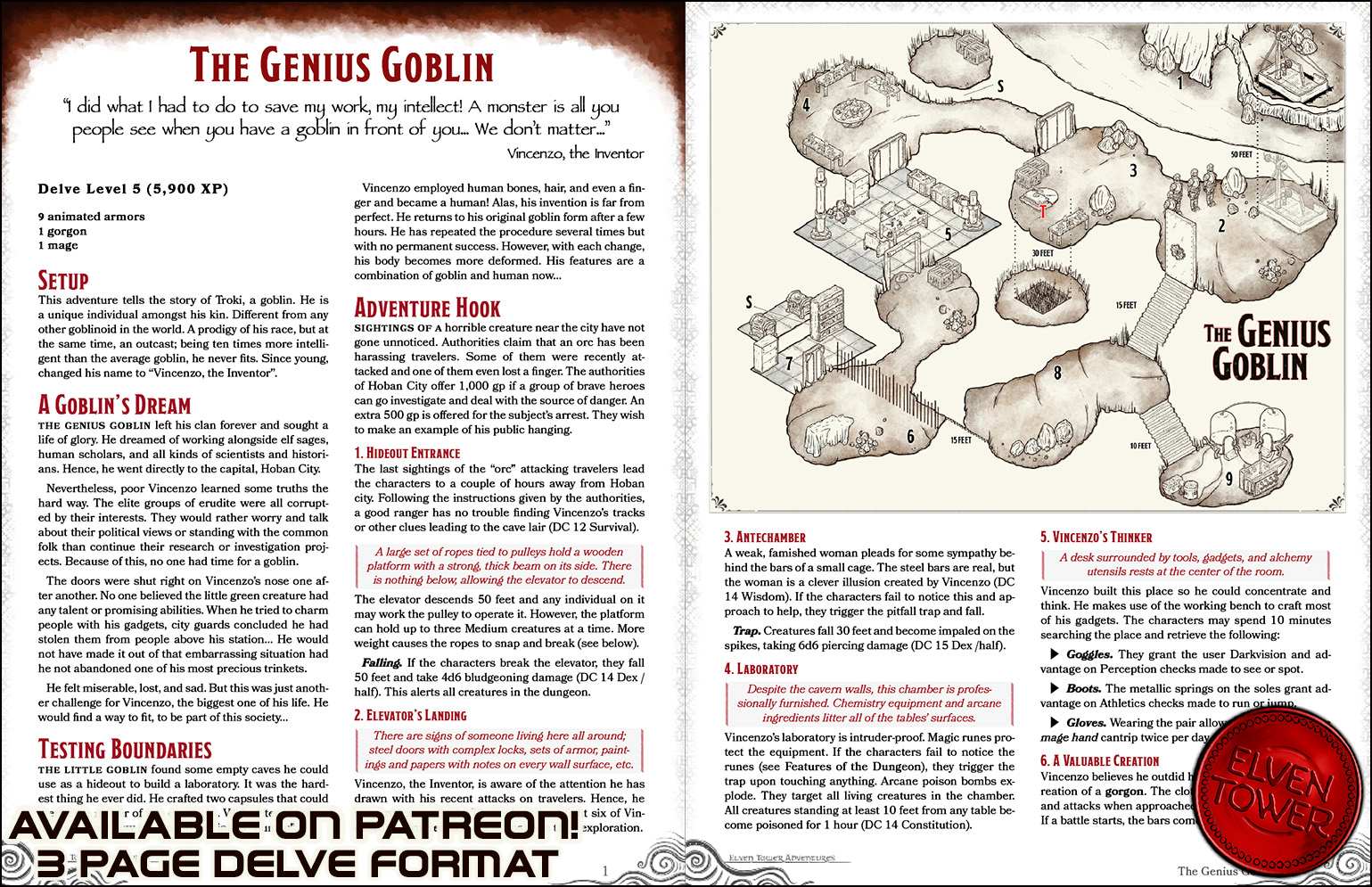 “I did what I had to do to save my work, my intellect! A monster is all you people see when you have a goblin in front of you… We don’t matter…”

This adventure tells the story of Troki, a goblin. He is a unique individual amongst his kin. Different from any other goblinoid in the world. A prodigy of his race, but at the same time, an outcast; being ten times more intelligent than the average goblin, he never fits. Since young, changed his name to “Vincenzo, the Inventor”.

The genius goblin left his clan forever and sought a life of glory. He dreamed of working alongside elf sages, human scholars, and all kinds of scientists and histori­ans. Hence, he went directly to the capital, Hoban City.

Nevertheless, poor Vincenzo learned some truths the hard way. The elite groups of erudite were all corrupt­ed by their interests. They would rather worry and talk about their political views or standing with the common folk than continue their research or investigation proj­ects. Because of this, no one had time for a goblin.

The doors were shut right on Vincenzo’s nose one af­ter another. No one believed the little green creature had any talent or promising abilities. When he tried to charm people with his gadgets, city guards concluded he had stolen them from people above his station… He would not have made it out of that embarrassing situation had he not abandoned one of his most precious trinkets.

He felt miserable, lost, and sad. But this was just anoth­er challenge for Vincenzo, the biggest one of his life. He would find a way to fit, to be part of this society…

The little goblin found some empty caves he could use as a hideout to build a laboratory. It was the hard­est thing he ever did. He crafted two capsules that could merge the matter of two creatures. With determination, he discovered how to turn himself into a “human”.

Vincenzo employed human bones, hair, and even a fin­ger and became a human! Alas, his invention is far from perfect. He returns to his original goblin form after a few hours. He has repeated the procedure several times but with no permanent success. However, with each change, his body becomes more deformed. His features are a combination of goblin and human now…

Sightings of a horrible creature near the city have not gone unnoticed. Authorities claim that an orc has been harassing travelers. Some of them were recently at­tacked and one of them even lost a finger. The authorities of Hoban City offer 1,000 gp if a group of brave heroes can go investigate and deal with the source of danger. An extra 500 gp is offered for the subject’s arrest. They wish to make an example of his public hanging.

The last sightings of the “orc” attacking travelers lead the characters to a couple of hours away from Hoban city. Following the instructions given by the authorities, a good ranger has no trouble finding Vincenzo’s tracks or other clues leading to the cave lair (DC 12 Survival).

A large set of ropes tied to pulleys hold a wooden platform with a strong, thick beam on its side. There is nothing below, allowing the elevator to descend.

The elevator descends 50 feet and any individual on it may work the pulley to operate it. However, the platform can hold up to three Medium creatures at a time. More weight causes the ropes to snap and break (see below).

Falling. If the characters break the elevator, they fall 50 feet and take 4d6 bludgeoning damage (DC 14 Dex / half). This alerts all creatures in the dungeon.

There are signs of someone living here all around; steel doors with complex locks, sets of armor, paint­ings and papers with notes on every wall surface, etc.

Vincenzo, the Inventor, is aware of the attention he has drawn with his recent attacks on travelers. Hence, he prepared accordingly. The heroes must fight six of Vin­cenzo’s animated armors to continue their exploration.

A weak, famished woman pleads for some sympathy be­hind the bars of a small cage. The steel bars are real, but the woman is a clever illusion created by Vincenzo (DC 14 Wisdom). If the characters fail to notice this and ap­proach to help, they trigger the pitfall trap and fall.

Despite the cavern walls, this chamber is profes­sionally furnished. Chemistry equipment and arcane ingredients litter all of the tables’ surfaces.

Vincenzo’s laboratory is intruder-proof. Magic runes pro­tect the equipment. If the characters fail to notice the runes (see Features of the Dungeon), they trigger the trap upon touching anything. Arcane poison bombs ex­plode. They target all living creatures in the chamber. All creatures standing at least 10 feet from any table be­come poisoned for 1 hour (DC 14 Constitution).

A desk surrounded by tools, gadgets, and alchemy utensils rests at the center of the room.

Vincenzo built this place so he could concentrate and think. He makes use of the working bench to craft most of his gadgets. The characters may spend 10 minutes searching the place and retrieve the following:

Vincenzo believes he outdid himself with his perfect rec­reation of a gorgon. The cloth-covered guardian wakes and attacks when approached by anyone but its creator. If a battle starts, the bars come down (see map).

Books, tomes, papers, and parchments on scientific, ar­cane, and history subjects fill the room. A vault is hidden behind the west wall (see Features of the Dungeon).

Vincenzo (mage) confronts the characters in “human” form. Three animated armors fight alongside him. During combat though, he turns back to goblin size (see picture). If things go sour, he pleads for his life and whines about how all people underestimate him just for being a goblin. He then cries because he is ugly and de­formed and does not know how to reverse this. The char­acters are free to decide his fate (see Development).

Two otherworldly capsules are connected by dozens of ropes and wires. Arcane devices on the wall moni­tor what happens within the copper containers.

None of the characters can understand how this ma­chine works. This is Vincenzo’s life work and only he can perfect the ominous device (see Development).

Secret Areas. Area 4 hides some loot behind a veil of rocks and rubble while area 7 features a bookshelf with a hidden pathway behind it (DC 14 Investigation).

Treasure. The heroes find 500 gp worth of fancy fab­ric and 731 gp worth of silverware in boxes within the secret cave in area 4 (DC 14 Investigation). The vault in area 7 (DC 16 Investigation), contains 1,324 gp in as­sorted gems and coins, and a +1 longsword. 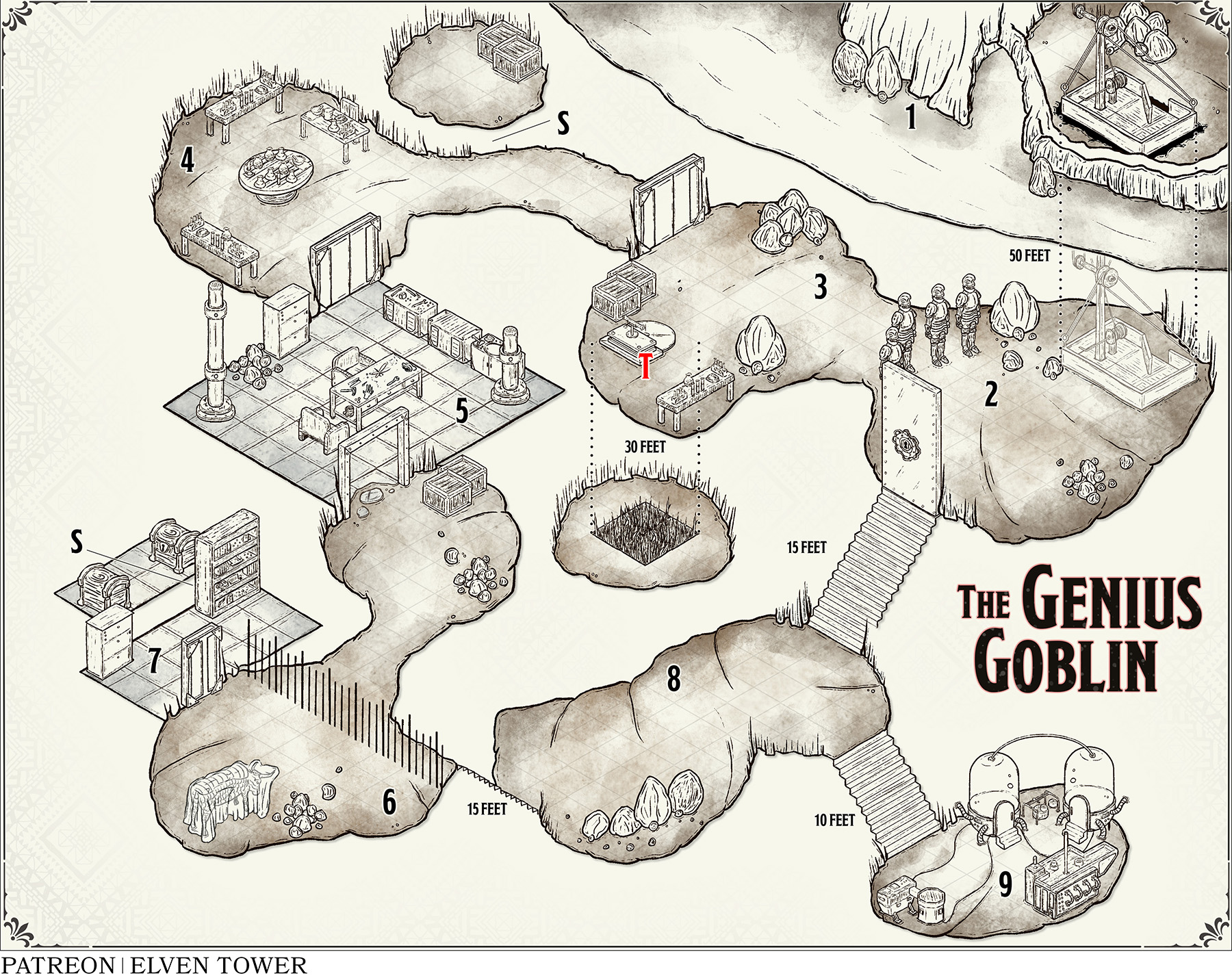