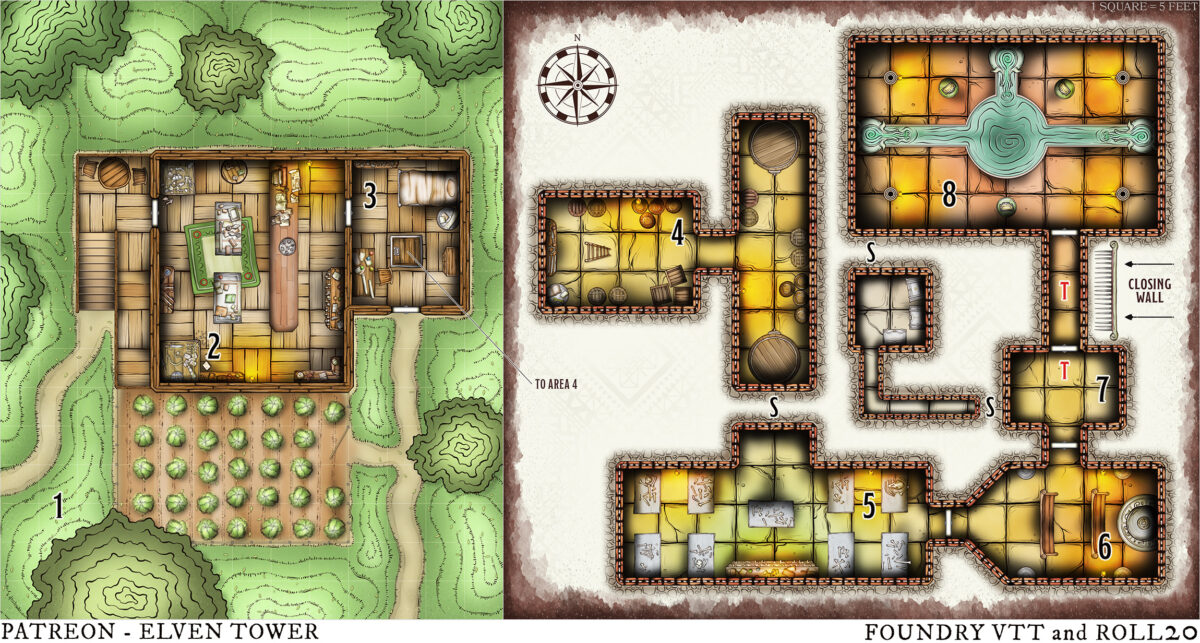 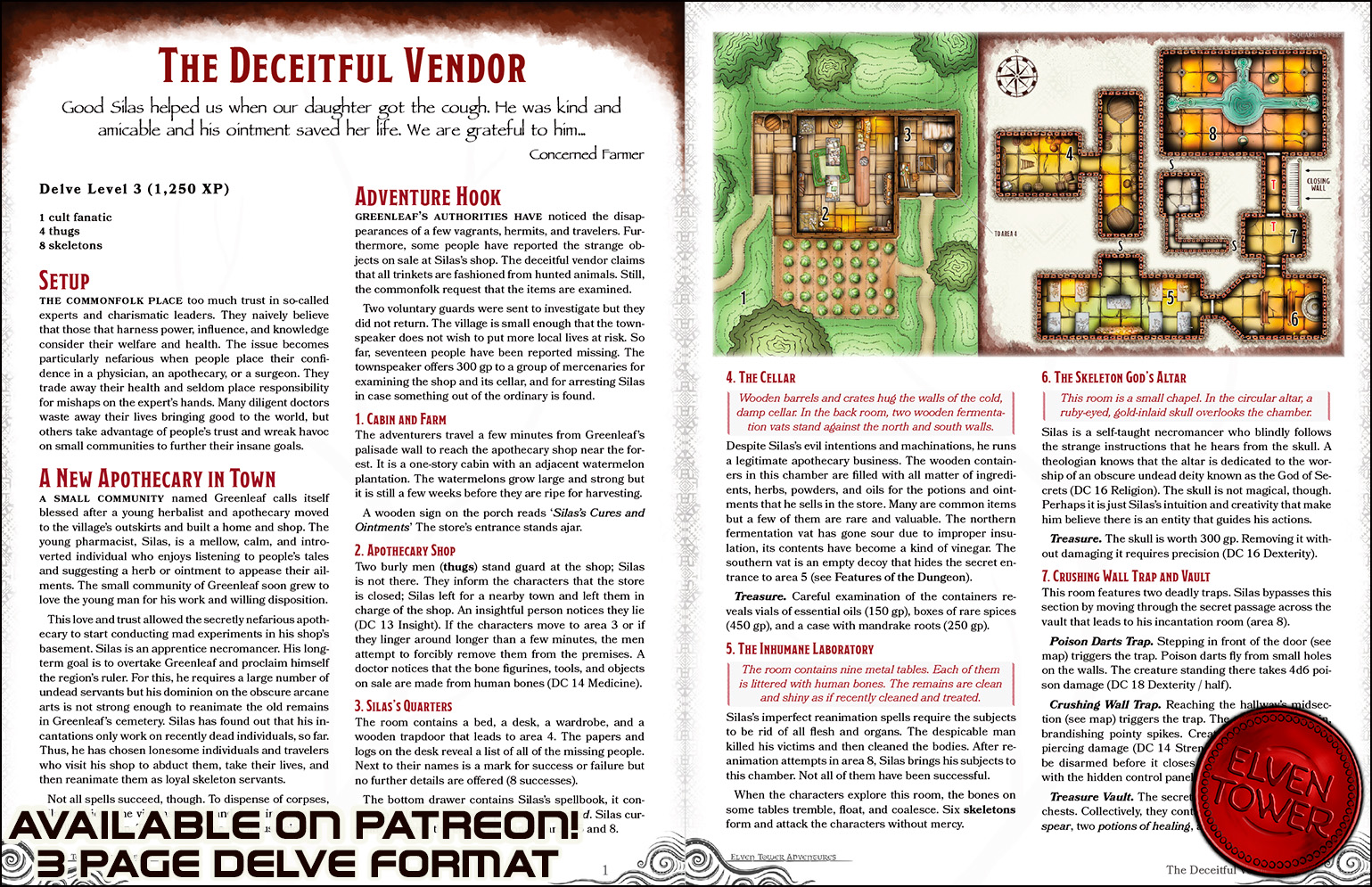 Good Silas helped us when our daughter got the cough. He was kind and amicable and his ointment saved her life. We are grateful to him…

The commonfolk place too much trust in so-called experts and charismatic leaders. They naively believe that those that harness power, influence, and knowledge consider their welfare and health. The issue becomes particularly nefarious when people place their confi­dence in a physician, an apothecary, or a surgeon. They trade away their health and seldom place responsibility for mishaps on the expert’s hands. Many diligent doctors waste away their lives bringing good to the world, but others take advantage of people’s trust and wreak havoc on small communities to further their insane goals.

A New Apothecary in Town

A small community named Greenleaf calls itself blessed after a young herbalist and apothecary moved to the village’s outskirts and built a home and shop. The young pharmacist, Silas, is a mellow, calm, and intro­verted individual who enjoys listening to people’s tales and suggesting a herb or ointment to appease their ail­ments. The small community of Greenleaf soon grew to love the young man for his work and willing disposition.

This love and trust allowed the secretly nefarious apoth­ecary to start conducting mad experiments in his shop’s basement. Silas is an apprentice necromancer. His long-term goal is to overtake Greenleaf and proclaim himself the region’s ruler. For this, he requires a large number of undead servants but his dominion on the obscure arcane arts is not strong enough to reanimate the old remains in Greenleaf’s cemetery. Silas has found out that his in­cantations only work on recently dead individuals, so far. Thus, he has chosen lonesome individuals and travelers who visit his shop to abduct them, take their lives, and then reanimate them as loyal skeleton servants.

Not all spells succeed, though. To dispense of corpses, Silas fashions the victims’ bones and flesh into trinkets to sell at the shop. These sales have risen suspicions.

Greenleaf’s authorities have noticed the disap­pearances of a few vagrants, hermits, and travelers. Fur­thermore, some people have reported the strange ob­jects on sale at Silas’s shop. The deceitful vendor claims that all trinkets are fashioned from hunted animals. Still, the commonfolk request that the items are examined.

Two voluntary guards were sent to investigate but they did not return. The village is small enough that the town­speaker does not wish to put more local lives at risk. So far, seventeen people have been reported missing. The townspeaker offers 300 gp to a group of mercenaries for examining the shop and its cellar, and for arresting Silas in case something out of the ordinary is found.

The adventurers travel a few minutes from Greenleaf’s palisade wall to reach the apothecary shop near the for­est. It is a one-story cabin with an adjacent watermelon plantation. The watermelons grow large and strong but it is still a few weeks before they are ripe for harvesting.

A wooden sign on the porch reads ‘Silas’s Cures and Ointments’ The store’s entrance stands ajar.

Two burly men (thugs) stand guard at the shop; Silas is not there. They inform the characters that the store is closed; Silas left for a nearby town and left them in charge of the shop. An insightful person notices they lie (DC 13 Insight). If the characters move to area 3 or if they linger around longer than a few minutes, the men attempt to forcibly remove them from the premises. A doctor notices that the bone figurines, tools, and objects on sale are made from human bones (DC 14 Medicine).

The room contains a bed, a desk, a wardrobe, and a wooden trapdoor that leads to area 4. The papers and logs on the desk reveal a list of all of the missing people. Next to their names is a mark for success or failure but no further details are offered (8 successes).

Wooden barrels and crates hug the walls of the cold, damp cellar. In the back room, two wooden fermenta­tion vats stand against the north and south walls.

Despite Silas’s evil intentions and machinations, he runs a legitimate apothecary business. The wooden contain­ers in this chamber are filled with all matter of ingredi­ents, herbs, powders, and oils for the potions and oint­ments that he sells in the store. Many are common items but a few of them are rare and valuable. The northern fermentation vat has gone sour due to improper insu­lation, its contents have become a kind of vinegar. The southern vat is an empty decoy that hides the secret en­trance to area 5 (see Features of the Dungeon).

The room contains nine metal tables. Each of them is littered with human bones. The remains are clean and shiny as if recently cleaned and treated.

Silas’s imperfect reanimation spells require the subjects to be rid of all flesh and organs. The despicable man killed his victims and then cleaned the bodies. After re­animation attempts in area 8, Silas brings his subjects to this chamber. Not all of them have been successful.

When the characters explore this room, the bones on some tables tremble, float, and coalesce. Six skeletons form and attack the characters without mercy.

This room is a small chapel. In the circular altar, a ruby-eyed, gold-inlaid skull overlooks the chamber.

Silas is a self-taught necromancer who blindly follows the strange instructions that he hears from the skull. A theologian knows that the altar is dedicated to the wor­ship of an obscure undead deity known as the God of Se­crets (DC 16 Religion). The skull is not magical, though. Perhaps it is just Silas’s intuition and creativity that make him believe there is an entity that guides his actions.

Treasure. The skull is worth 300 gp. Removing it with­out damaging it requires precision (DC 16 Dexterity).

This room features two deadly traps. Silas bypasses this section by moving through the secret passage across the vault that leads to his incantation room (area 8).

Three soapstone fountains with copper inlays and curvy spouts pour silvery water onto a central pool. The light-refracting water vibrates to a humming, pulsing sound that comes from its depths.

Following the strange voice in his mind and trying to in­terpret its meaning, Silas built this sanctum. The three fountains feed the 1-foot-deep pool with crystalline wa­ter. To use this strange device, Silas stands in the pond’s center and casts a necromancy spell. The only way he knows how to do this is by cutting his arm and pouring his blood on the water, thus empowering the spell.

The pond then serves as a focus for his magic. Still, with all these machinations, not all of his reanimation spells have worked. But Silas intuits that he is close to making a breakthrough in his casting abilities.

When the characters arrive at this chamber, they wit­ness Silas (cult fanatic) finish an incantation that caus­es two skeletons to rise from the blood-stained pond. He is accompanied by two thugs that aid him in this battle.

The Incantation Pond. The bloodstained water re­mains agitated throughout the encounter. Creatures oth­er than Silas and his allies that touch the water are at­tacked by it once per round (DC 14 Dexterity). The water takes on the form of pointy spikes, propels forward at high speed, and deals 2d6 piercing damage.

Treasure. Each of the fountains is inlaid with copper. Removing the precious metal with tools requires 30 min­utes. The resulting copper is worth 50 gp. In addition, Si­las carries a wand of magic missiles with 3 charges.

The characters reach the end of this adventure. They must face the consequences of their deeds:

The characters defeat Silas in the incantation room. If he is alive, Greenleaf’s authorities promptly judge him and sentence him to die within three days. The author­ities have trouble believing that the former apothecary was capable of such heinous crimes but they believe the characters’ tale after exploring the dungeon under the apothecary shop. After a thorough investigation, it is re­vealed that all of the seventeen missing people are ac­counted for; their remains are scattered among areas 5 and 8. The characters collect the 300 gp bounty and are allowed to keep other valuables found in Silas’s Cures and Ointments. After the despicable carnage is dis­closed, the locals shun the place and distrust strangers.

Smells and Sounds. A stench of death from area 5 permeates the dungeon. It grows stronger the closer to that area. The pond in area 8 produces a low-pitched, humming sound that can be heard from as far as area 5.

Magical Aura. A detect magic spell reveals the necro­mancy aura from the pool in area 8 from up to 100 feet. 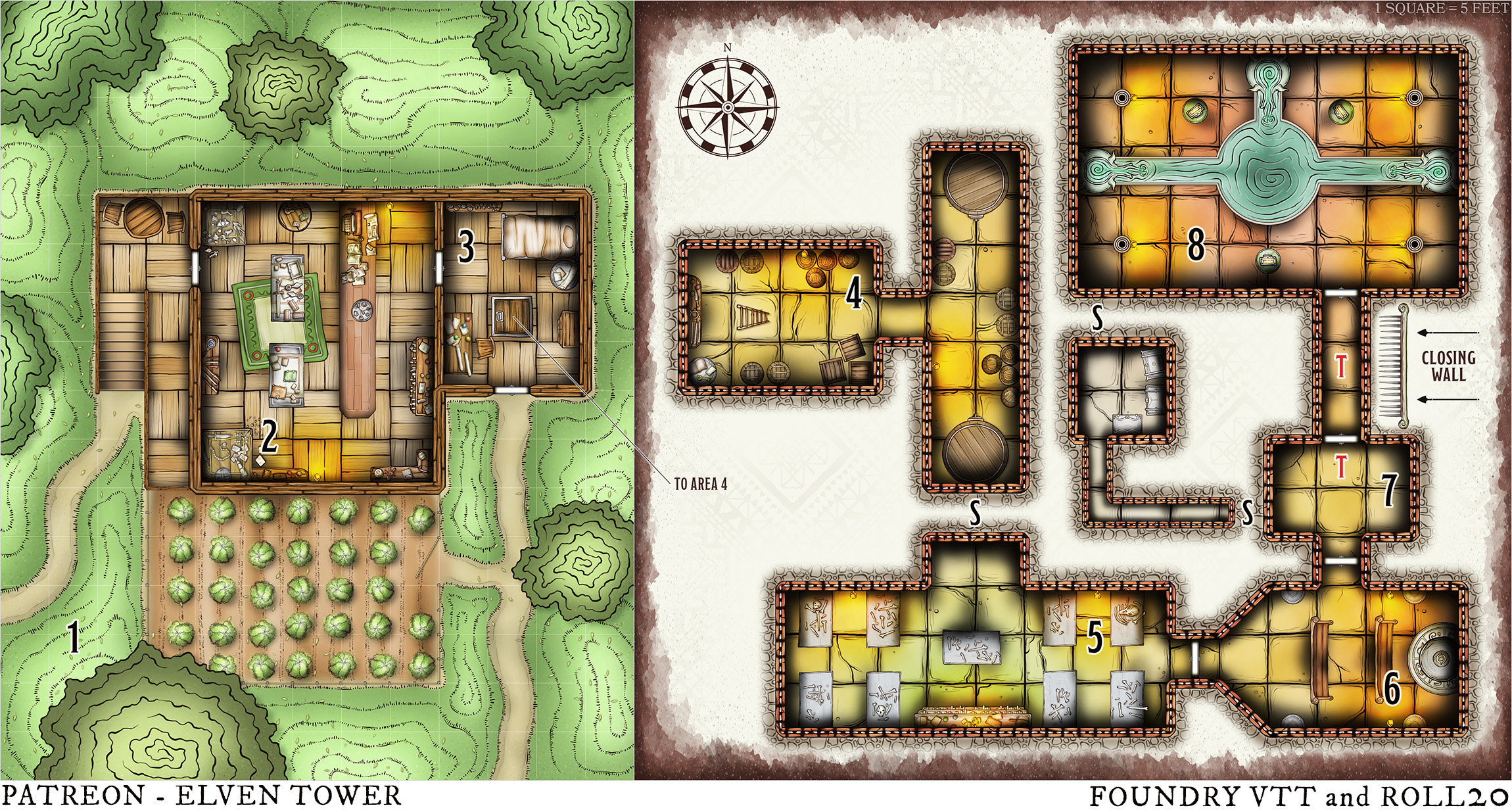