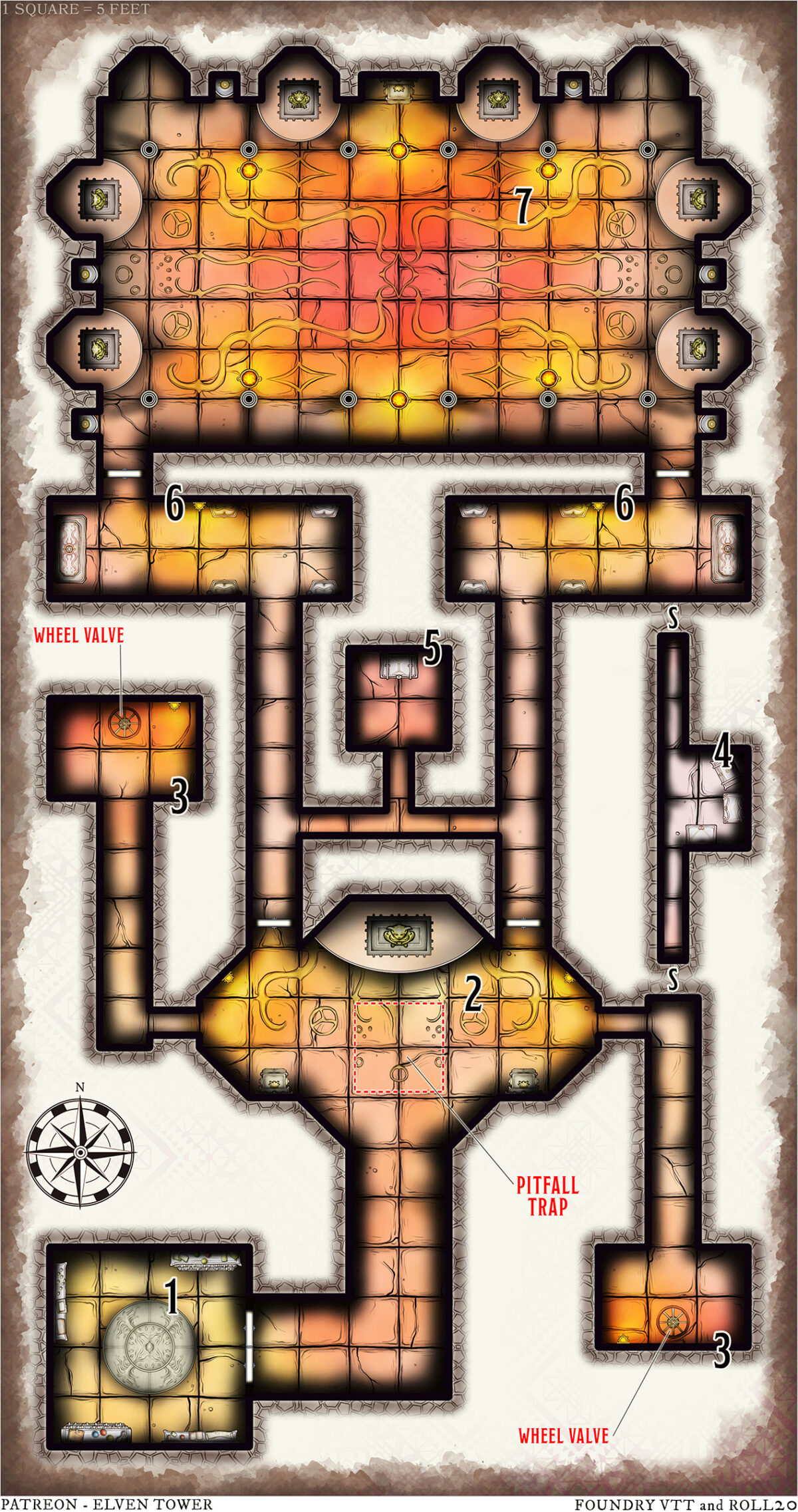 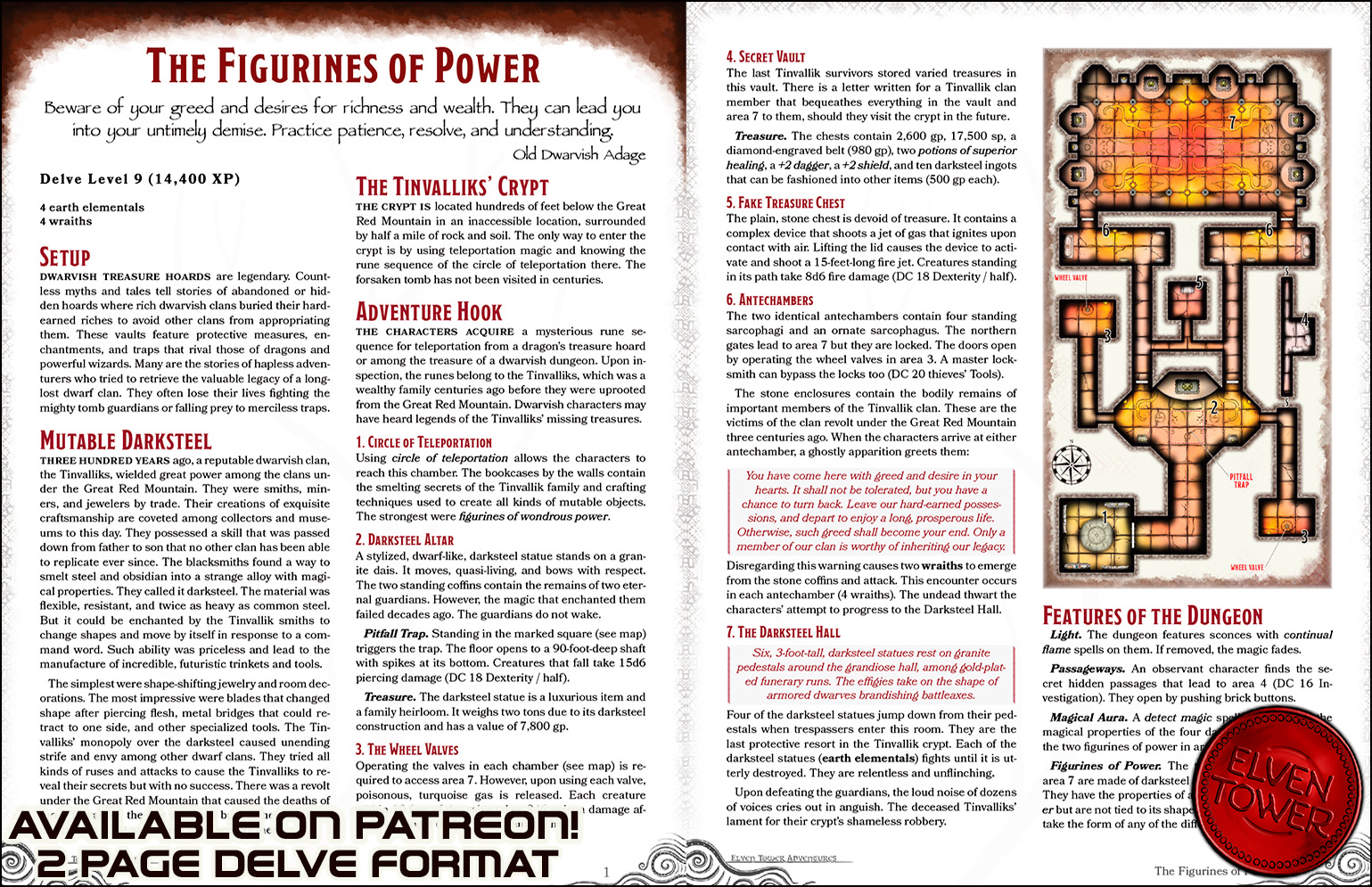 Beware of your greed and desires for richness and wealth. They can lead you into your untimely demise. Practice patience, resolve, and understanding.

Dwarvish treasure hoards are legendary. Count­less myths and tales tell stories of abandoned or hid­den hoards where rich dwarvish clans buried their hard-earned riches to avoid other clans from appropriating them. These vaults feature protective measures, en­chantments, and traps that rival those of dragons and powerful wizards. Many are the stories of hapless adven­turers who tried to retrieve the valuable legacy of a long-lost dwarf clan. They often lose their lives fighting the mighty tomb guardians or falling prey to merciless traps.

Three hundred years ago, a reputable dwarvish clan, the Tinvalliks, wielded great power among the clans un­der the Great Red Mountain. They were smiths, min­ers, and jewelers by trade. Their creations of exquisite craftsmanship are coveted among collectors and muse­ums to this day. They possessed a skill that was passed down from father to son that no other clan has been able to replicate ever since. The blacksmiths found a way to smelt steel and obsidian into a strange alloy with magi­cal properties. They called it darksteel. The material was flexible, resistant, and twice as heavy as common steel. But it could be enchanted by the Tinvallik smiths to change shapes and move by itself in response to a com­mand word. Such ability was priceless and lead to the manufacture of incredible, futuristic trinkets and tools.

The simplest were shape-shifting jewelry and room dec­orations. The most impressive were blades that changed shape after piercing flesh, metal bridges that could re­tract to one side, and other specialized tools. The Tin­valliks’ monopoly over the darksteel caused unending strife and envy among other dwarf clans. They tried all kinds of ruses and attacks to cause the Tinvalliks to re­veal their secrets but with no success. There was a revolt under the Great Red Mountain that caused the deaths of most Tinvalliks, the few survivors buried their relatives in a hidden crypt and stored their secrets there.

The crypt is located hundreds of feet below the Great Red Mountain in an inaccessible location, surrounded by half a mile of rock and soil. The only way to enter the crypt is by using teleportation magic and knowing the rune sequence of the circle of teleportation there. The forsaken tomb has not been visited in centuries.

The characters acquire a mysterious rune se­quence for teleportation from a dragon’s treasure hoard or among the treasure of a dwarvish dungeon. Upon in­spection, the runes belong to the Tinvalliks, which was a wealthy family centuries ago before they were uprooted from the Great Red Mountain. Dwarvish characters may have heard legends of the Tinvalliks’ missing treasures.

Using circle of teleportation allows the characters to reach this chamber. The bookcases by the walls contain the smelting secrets of the Tinvallik family and crafting techniques used to create all kinds of mutable objects. The strongest were figurines of wondrous power.

A stylized, dwarf-like, darksteel statue stands on a gran­ite dais. It moves, quasi-living, and bows with respect. The two standing coffins contain the remains of two eter­nal guardians. However, the magic that enchanted them failed decades ago. The guardians do not wake.

Pitfall Trap. Standing in the marked square (see map) triggers the trap. The floor opens to a 90-foot-deep shaft with spikes at its bottom. Creatures that fall take 15d6 piercing damage (DC 18 Dexterity / half).

Treasure. The darksteel statue is a luxurious item and a family heirloom. It weighs two tons due to its darksteel construction and has a value of 7,800 gp.

Operating the valves in each chamber (see map) is re­quired to access area 7. However, upon using each valve, poisonous, turquoise gas is released. Each creature within 10 feet of the valve takes 8d6 poison damage af­ter breathing it (DC 17 Constitution / half).

The last Tinvallik survivors stored varied treasures in this vault. There is a letter written for a Tinvallik clan member that bequeathes everything in the vault and area 7 to them, should they visit the crypt in the future.

The plain, stone chest is devoid of treasure. It contains a complex device that shoots a jet of gas that ignites upon contact with air. Lifting the lid causes the device to acti­vate and shoot a 15-feet-long fire jet. Creatures standing in its path take 8d6 fire damage (DC 18 Dexterity / half).

The two identical antechambers contain four standing sarcophagi and an ornate sarcophagus. The northern gates lead to area 7 but they are locked. The doors open by operating the wheel valves in area 3. A master lock­smith can bypass the locks too (DC 20 thieves’ Tools).

The stone enclosures contain the bodily remains of important members of the Tinvallik clan. These are the victims of the clan revolt under the Great Red Mountain three centuries ago. When the characters arrive at either antechamber, a ghostly apparition greets them:

You have come here with greed and desire in your hearts. It shall not be tolerated, but you have a chance to turn back. Leave our hard-earned posses­sions, and depart to enjoy a long, prosperous life. Otherwise, such greed shall become your end. Only a member of our clan is worthy of inheriting our legacy.

Disregarding this warning causes two wraiths to emerge from the stone coffins and attack. This encounter occurs in each antechamber (4 wraiths). The undead thwart the characters’ attempt to progress to the Darksteel Hall.

Upon defeating the guardians, the loud noise of dozens of voices cries out in anguish. The deceased Tinvalliks’ lament for their crypt’s shameless robbery.

Magical Aura. A detect magic spell can perceive the magical properties of the four darksteel guardians and the two figurines of power in area 7 from up to 100 feet.

Figurines of Power. The two northern figurines in area 7 are made of darksteel and weigh 40 pounds each. They have the properties of a figurine of wondrous pow­er but are not tied to its shape. Upon activation, each can take the form of any of the different figurines. 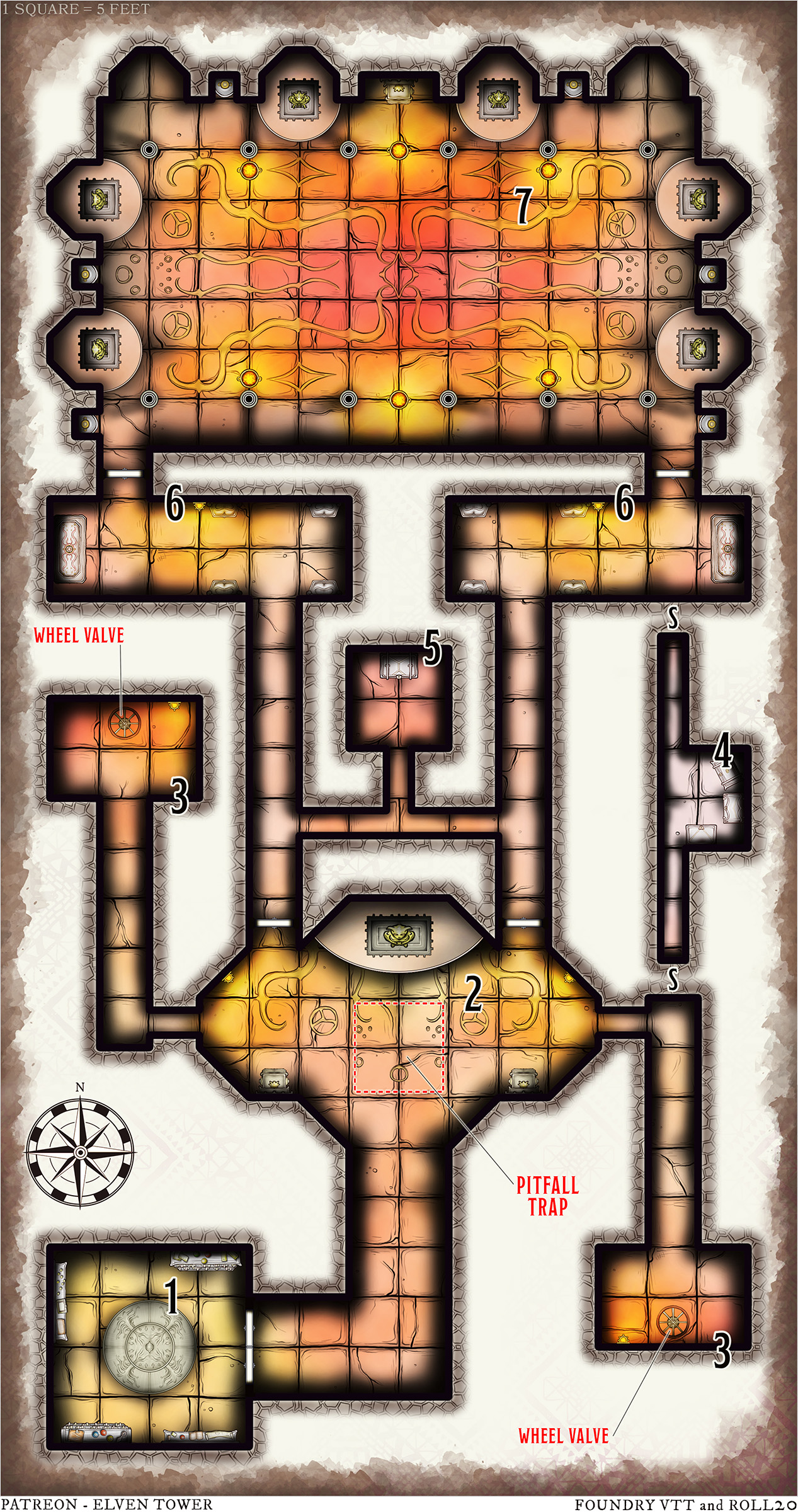