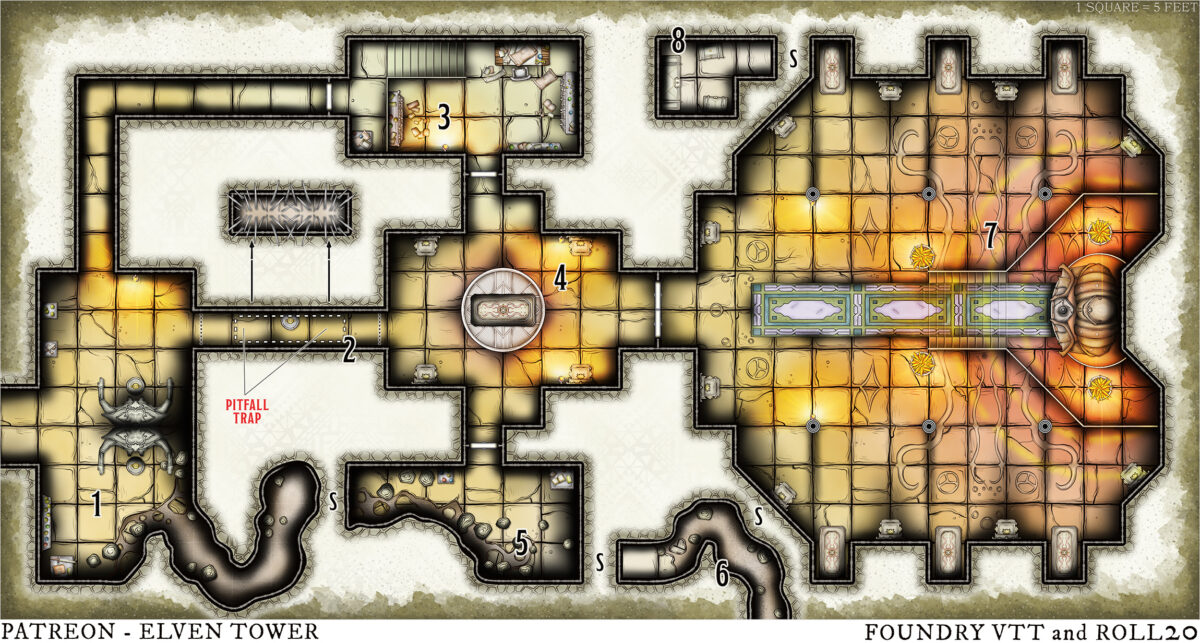 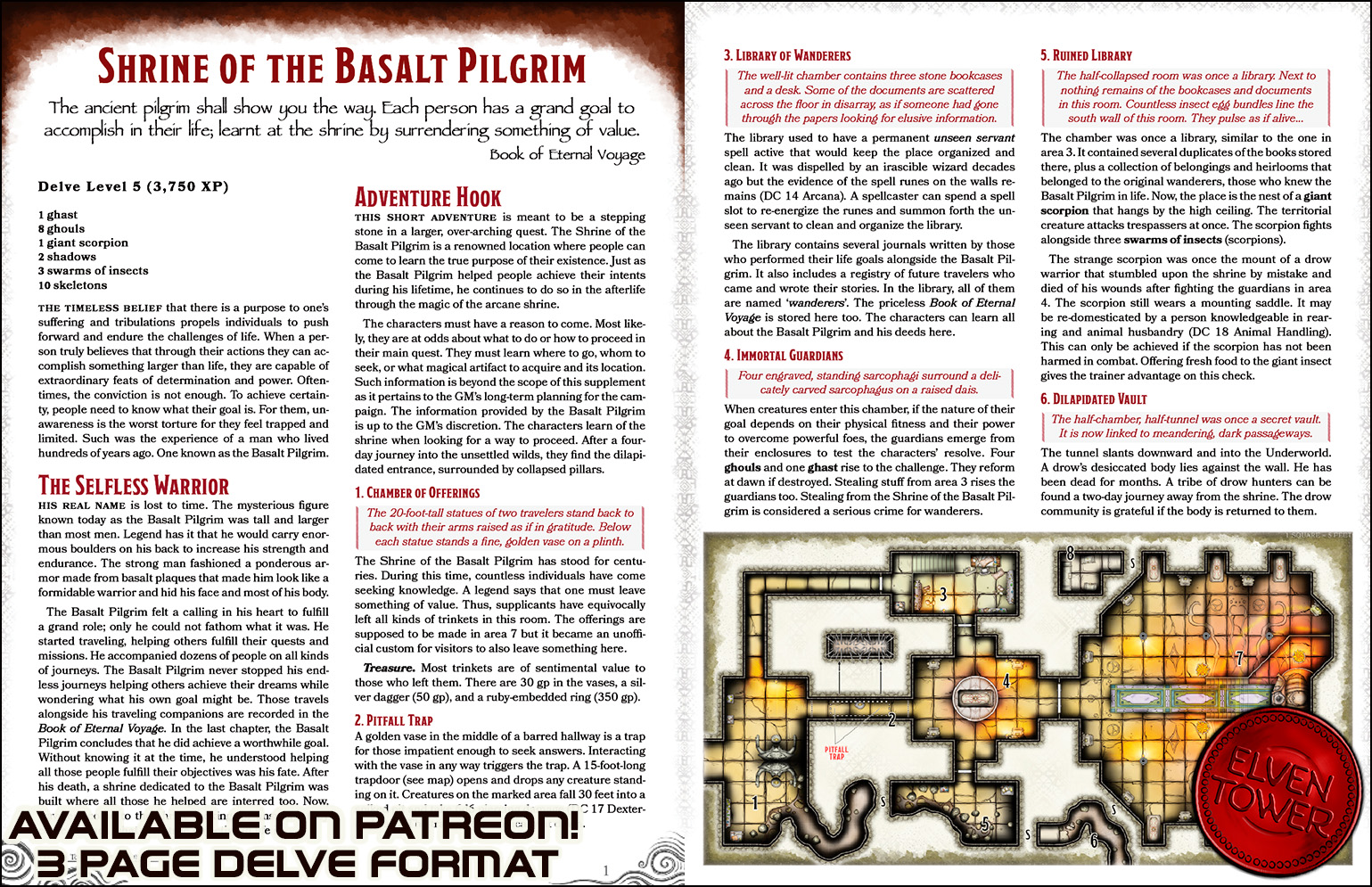 The ancient pilgrim shall show you the way. Each person has a grand goal to accomplish in their life; learnt at the shrine by surrendering something of value.

The timeless belief that there is a purpose to one’s suffering and tribulations propels individuals to push forward and endure the challenges of life. When a per­son truly believes that through their actions they can ac­complish something larger than life, they are capable of extraordinary feats of determination and power. Often­times, the conviction is not enough. To achieve certain­ty, people need to know what their goal is. For them, un­awareness is the worst torture for they feel trapped and limited. Such was the experience of a man who lived hundreds of years ago. One known as the Basalt Pilgrim.

His real name is lost to time. The mysterious figure known today as the Basalt Pilgrim was tall and larger than most men. Legend has it that he would carry enor­mous boulders on his back to increase his strength and endurance. The strong man fashioned a ponderous ar­mor made from basalt plaques that made him look like a formidable warrior and hid his face and most of his body.

The Basalt Pilgrim felt a calling in his heart to fulfill a grand role; only he could not fathom what it was. He started traveling, helping others fulfill their quests and missions. He accompanied dozens of people on all kinds of journeys. The Basalt Pilgrim never stopped his end­less journeys helping wanderers achieve their dreams while wondering what his own goal might be. Those travels alongside his traveling companions are recorded in the Book of Eternal Voyage. In the last chapter, the Ba­salt Pilgrim concludes that he did achieve a worthwhile goal. Without knowing it at the time, he understood that assisting all of them fulfill their objectives was his fate. After his death, a shrine dedicated to the Basalt Pilgrim was built where all his companions are interred too. Now, travelers come to the shrine looking for answers; they come to learn what their true objective in life is.

This short adventure is meant to be a stepping stone in a larger, over-arching quest. The Shrine of the Basalt Pilgrim is a renowned location where people can come to learn the true purpose of their existence. Just as the Basalt Pilgrim helped people achieve their intents during his lifetime, he continues to do so in the afterlife through the magic of the arcane shrine.

The characters must have a reason to come. Most like­ly, they are at odds about what to do or how to proceed in their main quest. They must learn where to go, whom to seek, or what magical artifact to acquire and its location. Such information is beyond the scope of this supplement as it pertains to the GM’s long-term planning for the cam­paign. The information provided by the Basalt Pilgrim is up to the GM’s discretion. The characters learn of this shrine after looking for a way to proceed. After a four-day journey into the unsettled wilds, they find the dilapidated entrance, surrounded by collapsed pillars.

The 20-foot-tall statues of two travelers stand back to back with their arms raised as if in gratitude. Below each statue stands a fine, golden vase on a plinth.

The Shrine of the Basalt Pilgrim has stood for centu­ries. During this time, countless individuals have come seeking knowledge. A legend says that one must leave something of value. Thus, supplicants have equivocally left all kinds of trinkets in this room. The offerings are supposed to be made in area 7 but it became an unoffi­cial custom for visitors to also leave something here.

Treasure. Most trinkets are of sentimental value to those who left them. There are 30 gp in the vases, a sil­ver dagger (50 gp), and a ruby-embedded ring (350 gp).

A golden vase in the middle of a barred hallway is a trap for those impatient enough to seek answers. Interacting with the vase in any way triggers the device. A 15-foot-long trapdoor (see map) opens and drops any creature standing on it. Creatures on the marked area fall 30 feet into a spiked pit and take 6d6 piercing damage (DC 17 Dexterity / half). The trap resets magically at dawn.

The well-lit chamber contains three stone bookcases and a desk. Some of the documents are scattered across the floor in disarray, as if someone had gone through the papers looking for elusive information.

The library used to have a permanent unseen servant spell active that would keep the place organized and clean. It was dispelled by an irascible wizard decades ago but the evidence of the spell runes on the walls re­mains (DC 14 Arcana). A spellcaster can spend a spell slot to re-energize the runes and summon forth the un­seen servant to clean and organize the library.

The library contains several journals written by those who performed their life goals alongside the Basalt Pil­grim. It also includes a registry of future travelers who came and wrote their stories. In the library, all of them are named ‘wanderers’. The priceless Book of Eternal Voyage is stored here too. The characters can learn all about the Basalt Pilgrim and his deeds here.

When creatures enter this chamber, if the nature of their goal depends on their physical fitness and their power to overcome powerful foes, the guardians emerge from their enclosures to test the characters’ resolve. Four ghouls and one ghast rise to the challenge. They reform at dawn if destroyed. Stealing stuff from area 3 rises the guardians too. Stealing from the Shrine of the Basalt Pil­grim is considered a serious crime for wanderers.

The half-collapsed room was once a library. Next to nothing remains of the bookcases and documents in this room. Countless insect egg bundles line the south wall of this room. They pulse as if alive…

The chamber was once a library, similar to the one in area 3. It contained several duplicates of the books stored there, plus a collection of belongings and heirlooms that pertain to the original wanderers, those who knew the Basalt Pilgrim in life. Now, the place is the nest of a giant scorpion that hangs by the high ceiling. The territorial creature attacks trespassers at once. The scorpion fights alongside three swarms of insects (scorpions).

The strange scorpion was once the mount of a drow warrior that stumbled upon the shrine by mistake and died of his wounds after fighting the guardians in area 4. The scorpion still wears a mounting saddle. It may be re-domesticated by a person knowledgeable in rear­ing and animal husbandry (DC 18 Animal Handling). This can only be achieved if the scorpion has not been harmed in combat. Offering fresh food to the giant insect gives the trainer advantage on this check.

The half-chamber, half-tunnel was once a secret vault. It is now linked to meandering, dark passageways.

The tunnel slants downward and into the Underworld. A drow’s desiccated body lies against the wall. He has been dead for months. A tribe of drow hunters can be found a two-day journey away from the shrine. The drow community is grateful if the body is returned to them.

7. The Shrine of the Basalt Pilgrim

A 30-foot-tall basalt statue of the Basalt Pilgrim stands tall and proud by the chamber’s far end. The light from four ever-burning braziers gives the statue a formidable, yet warm and inviting appearance.

The chamber’s arrangement, architecture, and lighting are designed to give the shrine a grandiose countenance. According to legend, the Basalt Pilgrim’s spirit inhabits the statue to help others carry on with their quests.

Supplicants whose goals do not require physical prow­ess may receive the Basalt Pilgrim’s wisdom directly. But the characters must ascertain their physical strength by defeating the undead guardians in the chamber (assum­ing that the completion of their mission requires them to be mighty and resilient). Ten skeletons, four ghouls, and two shadows fight the characters before the shrine.

The characters reach the end of this adventure. They must face the consequences of their deeds:

After defeating the undead guardians, the statue of the Basalt Pilgrim lights up. It speaks with a thunderous, low-pitched voice and reveals to each supplicant the in­formation they seek. The Basalt Pilgrim’s revelations are truthful but their deliverance is famously vague or hard to understand at first. They are meant to propel the char­acters in the right direction without spoiling the fun of future events or discoveries. After consulting the Basalt Pilgrim, a person cannot do so again during their life­time. The statue becomes ever unresponsive.

Magical Aura. A detect magic spell reveals a divination aura coming from the Basalt Pilgrim statue in area 7. It can be sensed from as far as 80 feet from it.

Humidity. The underground compound is located near a natural spring. The water filters through most walls, damping them and giving them a humid look. 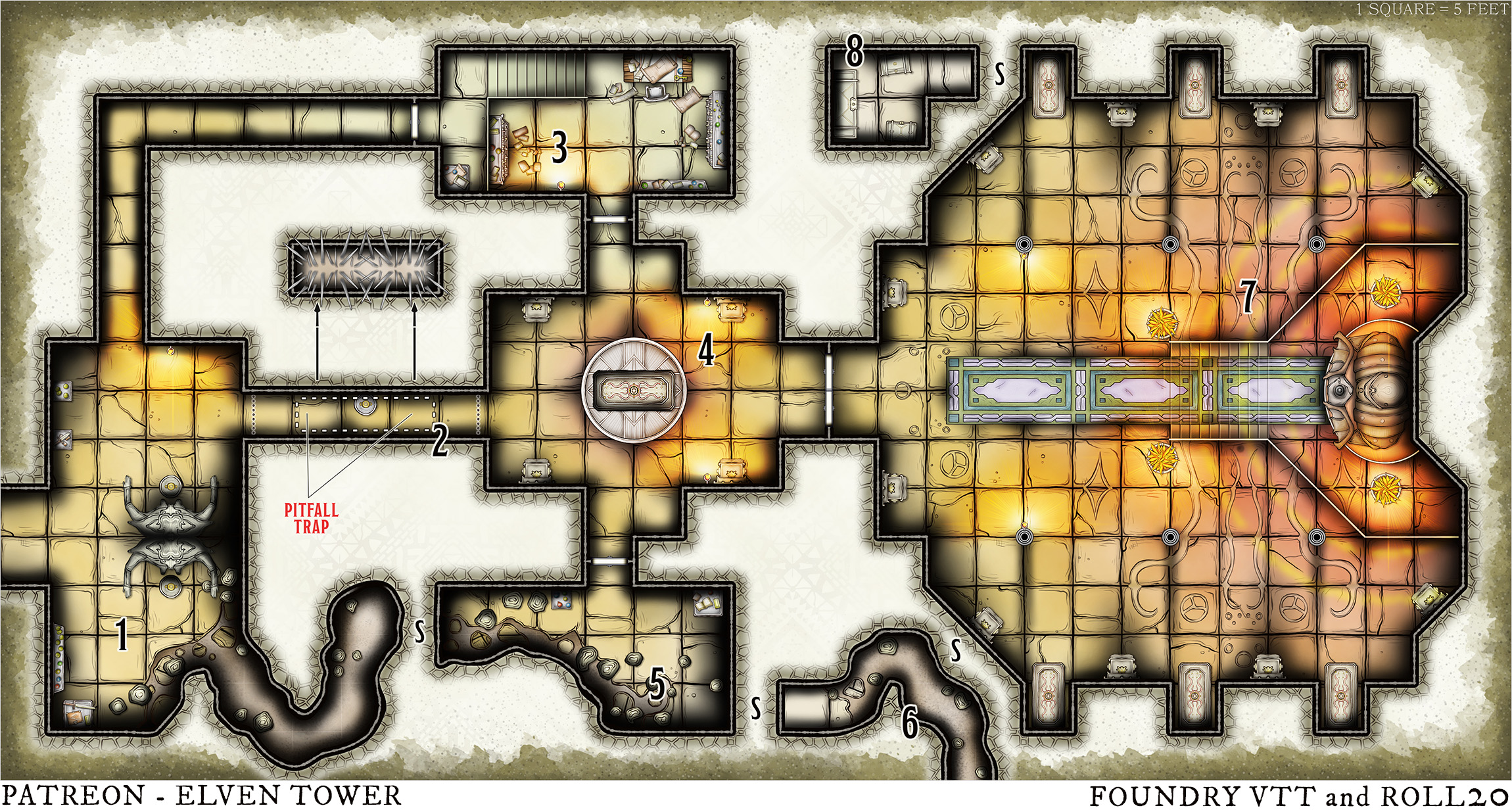