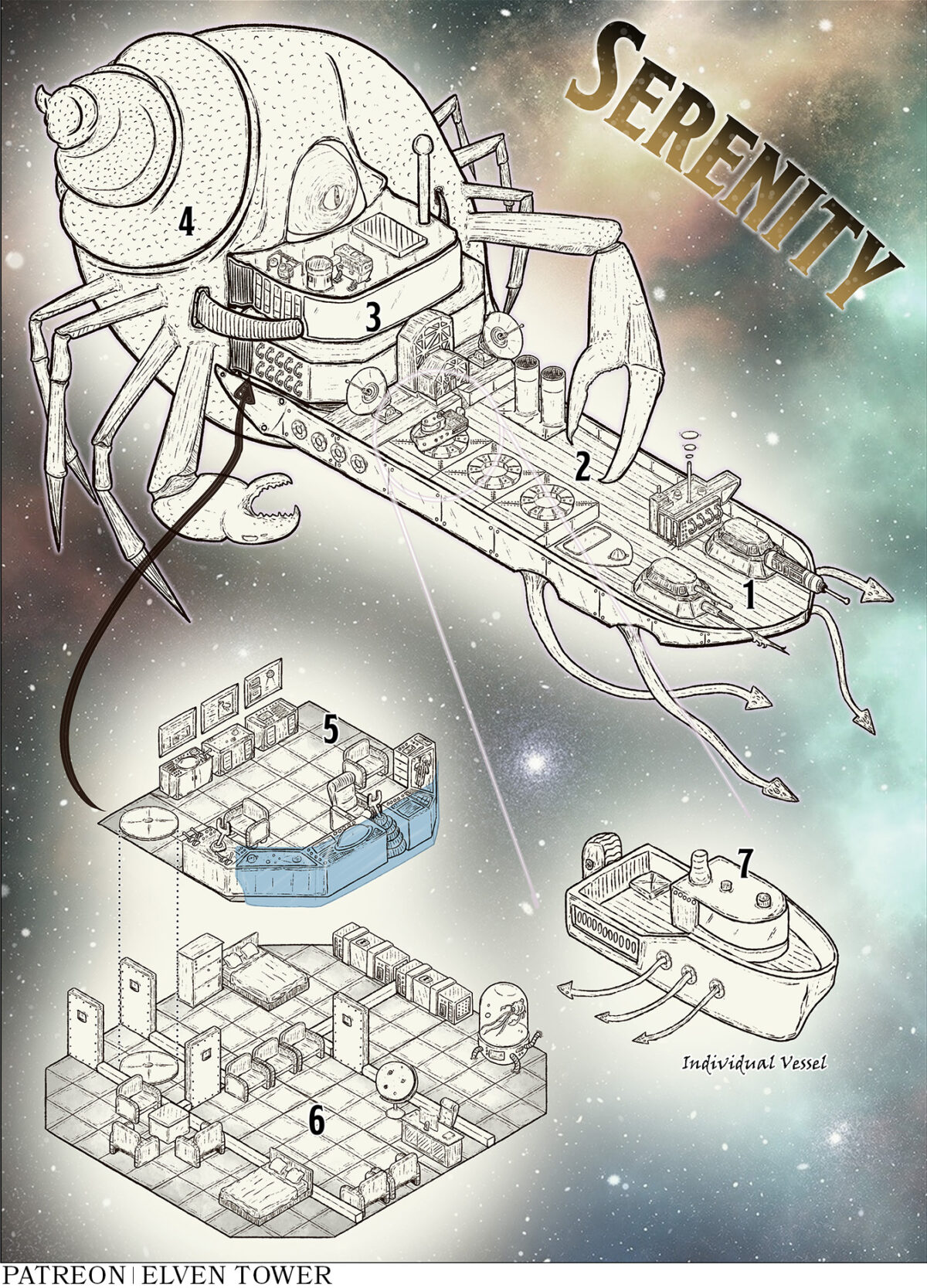 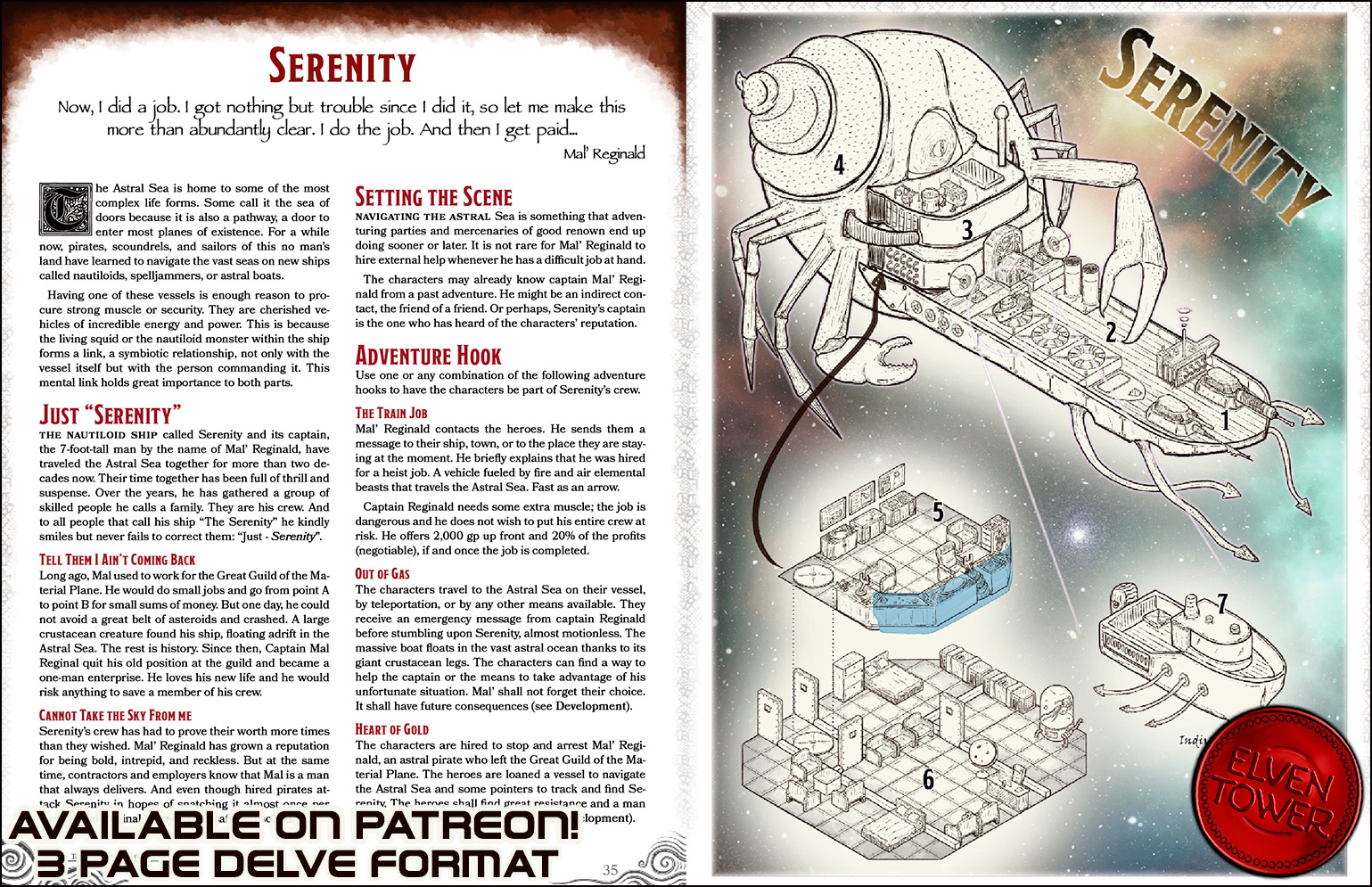 Now, I did a job. I got nothing but trouble since I did it, so let me make this more than abundantly clear. I do the job. And then I get paid…

The Astral Sea is home to some of the most complex life forms. Some call it the sea of doors because it is also a pathway, a door to enter most planes of existence. For a while now, pirates, scoundrels, and sailors of this no man’s land have learned to navigate the vast seas on new ships called nautiloids, spelljammers, or astral boats.

Having one of these vessels is enough reason to pro­cure strong muscle or security. They are cherished ve­hicles of incredible energy and power. This is because the living squid or the nautiloid monster within the ship forms a link, a symbiotic relationship, not only with the vessel itself but with the person commanding it. This mental link holds great importance to both parts.

The nautiloid ship called Serenity and its captain, the 7-foot-tall man by the name of Mal’ Reginald, have traveled the Astral Sea together for more than two de­cades now. Their time together has been full of thrill and suspense. Over the years, he has gathered a group of skilled people he calls a family. They are his crew. And to all people that call his ship “The Serenity” he kindly smiles but never fails to correct them: “Just – Serenity”.

Tell Them I Ain’t Coming Back

Long ago, Mal used to work for the Great Guild of the Ma­terial Plane. He would do small jobs and go from point A to point B for small sums of money. But one day, he could not avoid a great belt of asteroids and crashed. A large crustacean creature found his ship, floating adrift in the Astral Sea. The rest is history. Since then, Captain Mal Reginal quit his old position at the guild and became a one-man enterprise. He loves his new life and he would risk anything to save a member of his crew.

Cannot Take the Sky From me

Serenity’s crew has had to prove their worth more times than they wished. Mal’ Reginald has grown a reputation for being bold, intrepid, and reckless. But at the same time, contractors and employers know that Mal is a man that always delivers. And even though hired pirates at­tack Serenity in hopes of snatching it almost once per month, Mal Reginal always lands safe and sound.

Navigating the Astral Sea is something that adven­turing parties and mercenaries of good renown end up doing sooner or later. It is not rare for Mal’ Reginald to hire external help whenever he has a difficult job at hand.

The characters may already know captain Mal’ Regi­nald from a past adventure. He might be an indirect con­tact, the friend of a friend. Or perhaps, Serenity’s captain is the one who has heard of the characters’ reputation.

Use one or any combination of the following adventure hooks to have the characters be part of Serenity’s crew.

Mal’ Reginald contacts the heroes. He sends them a message to their ship, town, or to the place they are stay­ing at the moment. He briefly explains that he was hired for a heist job. A vehicle fueled by fire and air elemental beasts that travels the Astral Sea. Fast as an arrow.

Captain Reginald needs some extra muscle; the job is dangerous and he does not wish to put his entire crew at risk. He offers 2,000 gp up front and 20% of the profits (negotiable), if and once the job is completed.

The characters travel to the Astral Sea on their vessel, by teleportation, or by any other means available. They receive an emergency message from captain Reginald before stumbling upon Serenity, almost motionless. The massive boat floats in the vast astral ocean thanks to its giant crustacean legs. The characters can find a way to help the captain or the means to take advantage of his unfortunate situation. Mal’ shall not forget their choice. It shall have future consequences (see Development).

The characters are hired to stop and arrest Mal’ Regi­nald, an astral pirate who left the Great Guild of the Ma­terial Plane. The heroes are loaned a vessel to navigate the Astral Sea and some pointers to track and find Se­renity. The heroes shall find great resistance and a man who knows his way around words (see Development).

DC 14: Nautiloids are rare, expensive ships that can travel the Astral Sea at great speeds. These boats fea­ture a thick shell that protects them, and tentacles to help them move through the astral waters. There are ru­mors of such a ship that goes by the name of Serenity.

DC 16: Serenity is led by captain Mal’ Reginald. He used to work for the Great Guild of the Material Plane many years ago. Now he is a wanted man for several reasons. He made many enemies by leaving the guild. His ship Serenity is one of the most powerful nautiloids around. And although he has made plenty of friends and built a great reputation in the past two decades, he had to cross some dangerous people along the way to accomplish so.

Serenity is a bit larger compared to other nautiloids. Its shell is not exactly a nautiloid, and the astral beast with­in is more like a crab than a squid. This makes the ship heavier, therefore slower. But Serenity’s hull has never been breached before and no other nautiloid can com­pete with Serenity’s massive, armored crablike pincers.

Two complex mechanical guns face toward the front. A person can climb inside the cabin of any of them to op­erate them. The following are the three possible attacks that can be made operating Serenity’s weapons.

Harpoon Gun. Ranged Weapon Attack: +8 to hit, range 80/320 ft., one target. Hit: 18 (4d8) piercing damage and the target becomes tethered to Serenity. This is usually used against other boats and vessels.

Particle Beam. Ranged Weapon Attack: +8 to hit, range 80/320 ft., one target. Hit: 66 (20d6) force dam­age. If this damage reduces any target, creature, or ob­ject, to 0 hit points, it is turned to fine gray dust. This weapon requires one hour of recharging before reuse.

The main deck of Serenity holds the main weapons, the engine exhausts, on-deck access to the engine and lower deck, and the individual landing pods for ships. Two ra­dars are on the search for signals or lost messages. Cap­tain Reginald dubbed these “calls of duty”.

Captain’s Reginald crew comprehends five people and they are often here. The pilot is Washburn. One of the best on the field. Zoey is the captain’s right arm, a former member of the guild too. Kay-Lee is the ship’s mechanic and J.N. is the crew’s weapons expert and muscle. And the negotiator member of the team is Baccara, a diplo­mat. She has saved the captain’s gut many times.

The beast in Serenity is a complex creature. It has a sin­gle central eye, it is joined to the ship just below it, tubes and steel joints fused to the shell or going inside it. And the six legs and two pincers grow from the reinforced shell, not from under it. The front tentacles work as natu­ral radars for the beast. They slither in the air, capturing vibrations, and send their findings to the bridge.

Three people can operate the controls of Serenity at any given time. The pilot has access to all this from his seat but sometimes the job requires the others to take some of the controls and let Washburn drive.

The crew can relax, have a meal, or rest in some of these rooms. The most important area here is the breeding chamber. The capsules here are an ongoing experiment that captain Reginald hopes to become rich from. He uses some of Serenity’s crab blood to attempt to recre­ate its species through magical means and science.

Some of the juvenile nautiloids created from the breed­ing chamber have been used as prototypes for small, in­dividual boats or ships. Serenity has two of these pro­totypes. They are fully operational but their energy is limited. They have reduced fuel capacity.

The following are follow-up ideas for the adventure hooks presented in this adventure. The GM is free to al­ter or modify how things occur or what happens next.

The train belongs to the Great Guild of the Material Plane. If the heroes’ faces were seen during the heist, the characters are now wanted targets, like the captain.

The heroes make an incredible new friend if they help Serenity’s captain and his crew. However, if they choose to steal his ship or rob him, Mal’ Reginald becomes their worst enemy. He shall hunt them forever while he lives.

Captain Reginald resists the attack and captures the characters. He forgives them and lets them live under one condition. Do a job against the guild for free.

If the heroes arrest the captain, he tries to talk his way out and prove that letting him and his crew go will be more profitable in the future. If that does not work, he swears he will find them once he comes out of jail. And he will, but that is an adventure for another time… 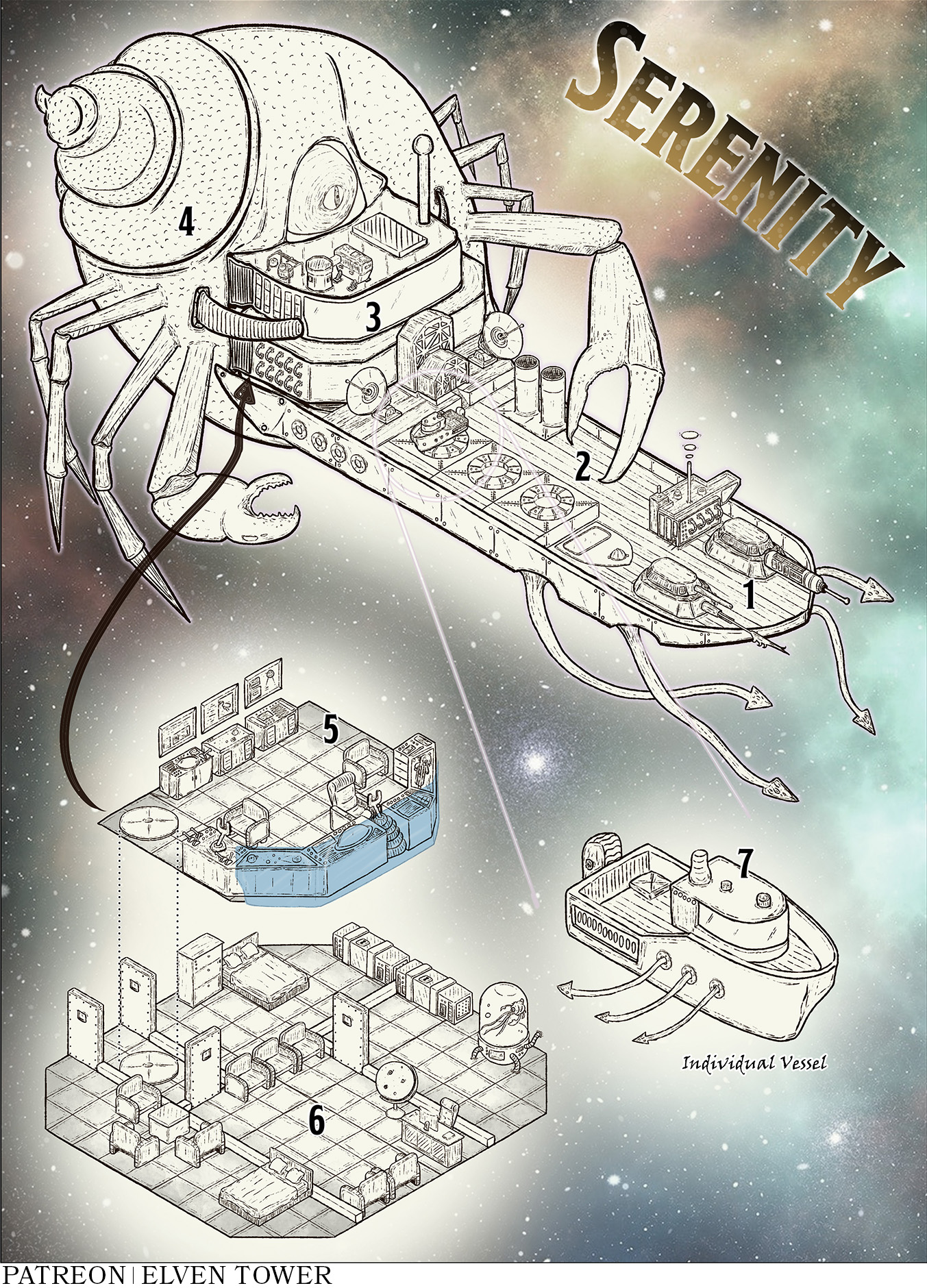