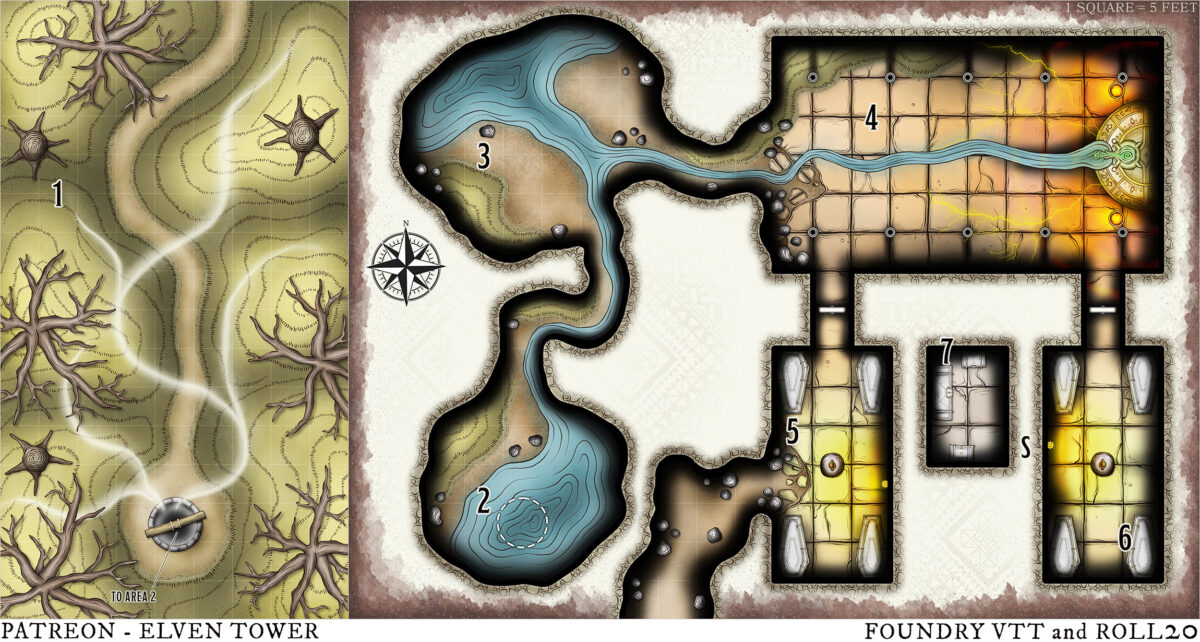 The smoke coming from the well is dense and smells of sulfur and death. It has killed all nature around it. You should find a way to protect your noses.

Some things are best forgotten and left alone. Dan­gerous objects that bring forth chaos and destruction are better off lost or forgotten in faraway, unknown loca­tions. But sooner or later, these coveted artifacts end up resurfacing once more. Either by mere coincidence or because someone spent enough time and resources to get it and came in possession of such an object.

This adventure tells the story of the Urn of Darkness, an ancient, ebony, arcane container. This urn has the power to bring the deceased back to life as rabid undead. No one knows how old the artifact is. But it is said that it was crafted by demons. Monsters that employed ar­cane pottery to reshape ebony-black clay from the abyss and mixed it with demonic steel. They shaped an urn, decorated with intricate mithral and silver details. Eons ago, the demons managed to place their foul creation in the Material Plane. It was only a matter of time. A weak-minded individual would fall for the urn’s silent whispers… A hundred demons’ voices speak through it.

The urn has been in the Material Plane for hundreds of years. It has had plenty of owners. And all of them have tried to please the voices that come from the urn. They all worked like mad to create a way to connect this world to the demons’ plane. But none of them succeed­ed. Strong divine agents stopped them. Good-hearted ad­venturers tracked their activities and took care of them. Or they simply did not have the brains or the wits to go through with the demons’ plan. Inevitably, they failed.

Fifty years ago, a paladin and his followers stopped the last urn’s owner. Unable to destroy the ewer, and fearing falling for its deceitful whispers, the adventurers hid the urn in a long-forgotten crypt and placed protective spells. They hoped no one would find it. They thought wrong…

The Will of the Urn

Without a user, the urn’s power is diminished. It needs a puppet to do its bidding. Many years have passed and the demonic voices grow restless. The arcane incan­tations within the urn evolve and find ways to bend the Material Plane’s fabric. In an unexpected turn of events, the Urn of Darkness has released a white fine mist.

This phenomenon started two weeks ago. It was report­ed in Galifar Town when some witnesses reported that Gali Forest was dying. They were not wrong; the mist of death obliterated all life within 200 feet of the crypt.

The authorities from Galifar Town do not have men to spare to send to investigate. They offer 2,000 gp to brave mercenaries for finding the source of the mist in Gali Forest and making sure it is stopped for good.

The adventurers travel a few hours in the woods before reaching the affected area. People cannot use the water since it was polluted too. Likewise, the heroes might suf­fer consequences (See Features of the Dungeon).

2. Bottom of the Well

The adventurers must find a way to climb down the well and descend 60 feet. However, the water does not look welcoming at all. Failing a DC 12 Strength check to jump away from the water (see map) causes a creature to fall into the pond and become completely soaked.

Polluted Water. The water’s thick and viscous consis­tency makes it disgusting. The smell is bad but tolera­ble. Getting soaked in this substance is a test to anyone’s bowels (DC 12 Constitution not to throw up). Additional­ly, an evolved, vicious kind of fish lives here. Two swarms of quippers attack anyone who falls into the water.

The foul water goes into the east tunnel as well. It opens into a larger cavern. The water accumulates by the north wall and forms a pool. However, an abnormal stream of water goes east and enters a chamber (area 4).

A detect magic spell reveals powerful arcane energy coming from that direction. The water defies gravity and continues its way upward and into the dark container. In turn, the urn releases dark smoke back into the water. This combination is what causes the mist of death.

4. The Urn of Darkness

Strings of lightning cut the air as if the energy contained within the urn looked for a way to escape. Ethereal figures coalesce from the thick mist…

Four shadows materialize and attack the characters be­fore they can search the room. They may deal with the urn after combat (See Features of the Dungeon).

The dead within both crypts were also affected by the urn’s power. Once the battle begins in area 4, four zom­bies emerge from their stone enclosures and join the battle at the start of the second round of battle.

Recent cave-ins destroyed a section of this crypt’s wall. The south tunnel leads to a closed cavern, a dead end.

Two ghouls and two zombies behave in the same way as their comrades in area 5. But they arrive until the start of the third combat round. All enemies fight until slain.

There is a hidden switch behind one of the sarcophagi (DC 14 Investigation). The wall slides sideways and re­veals a narrow passage to the hidden vault. There are 2,431 gp in assorted silver and gold coins, a +1 dagger, and four random level 1 and 2 wizard spell scrolls.

Mist. Inhaling it causes 1 level of exhaustion (DC 13 Con). Repeat this save each hour. A successful save does not remove any levels of exhaustion previously gained.

Urn. The demons’ voices can whisper to the mind of any creature within line of sight. Once combat starts, the urn attempts to dominate one of the characters (DC 13 Wisdom) each turn. The duration of this spell is 8 hours, not 1 minute. It can control one person at a time. The characters are free to flee, fight the urn, attempt to de­stroy it, or try to bury it again. Will they succeed? 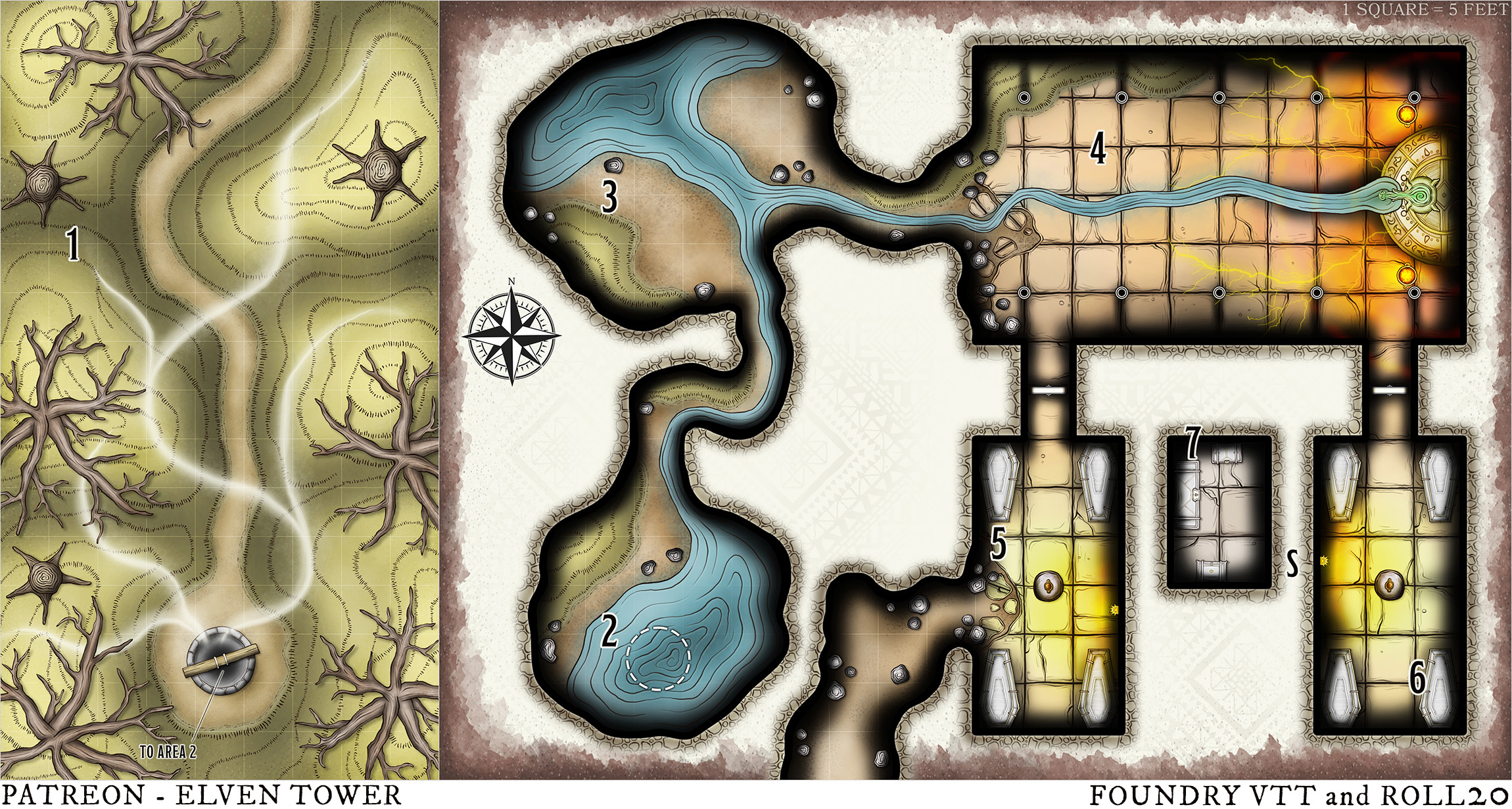