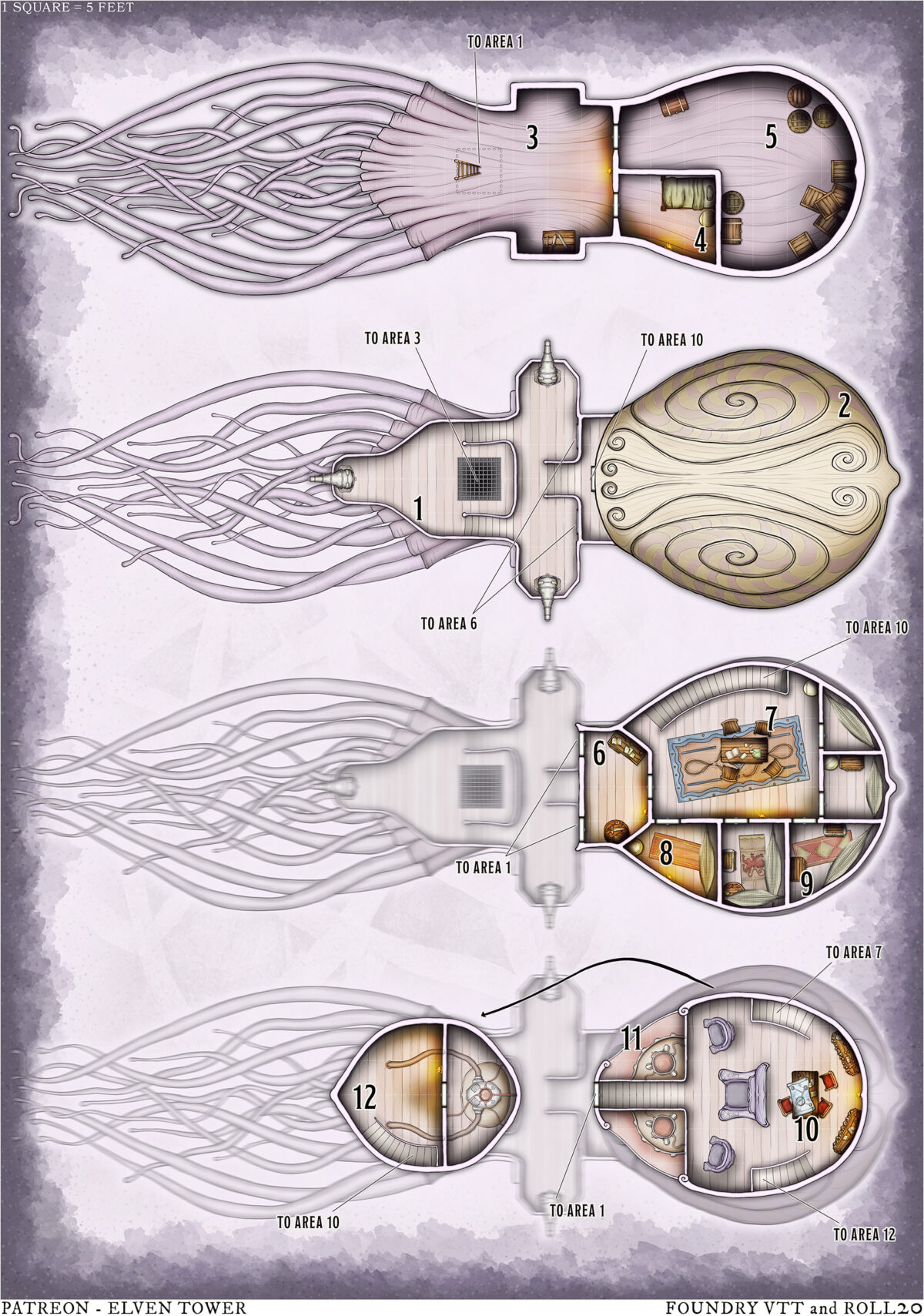 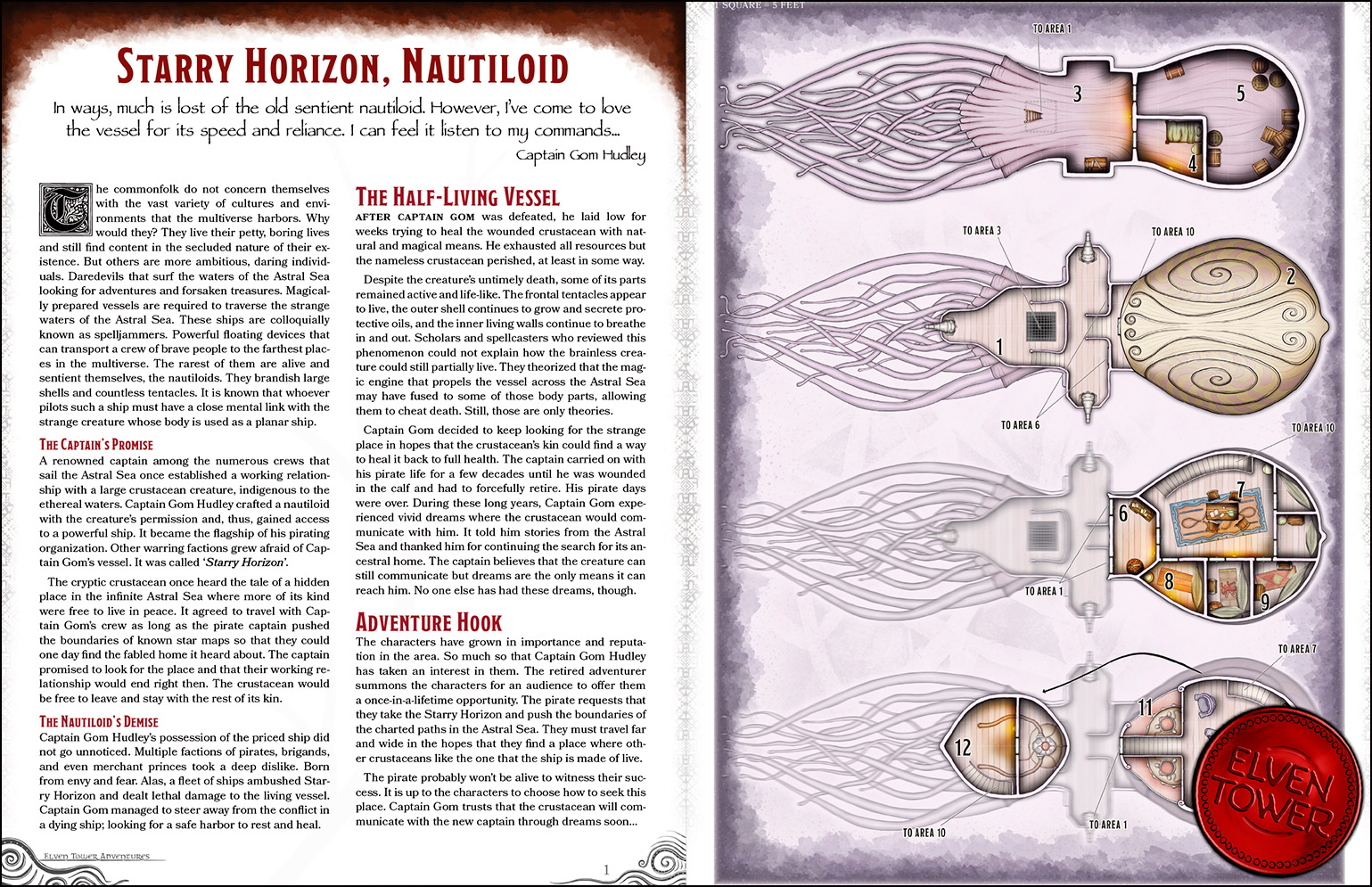 In ways, much is lost of the old sentient nautiloid. However, I’ve come to love the vessel for its speed and reliance. I can feel it listen to my commands…

The commonfolk do not concern themselves with the vast variety of cultures and envi­ronments that the multiverse harbors. Why would they? They live their petty, boring lives and still find content in the secluded nature of their ex­istence. But others are more ambitious, daring individ­uals. Daredevils that surf the waters of the Astral Sea looking for adventures and forsaken treasures. Magical­ly prepared vessels are required to traverse the strange waters of the Astral Sea. These ships are colloquially known as spelljammers. Powerful floating devices that can transport a crew of brave people to the farthest plac­es in the multiverse. The rarest of them are alive and sentient themselves, the nautiloids. They brandish large shells and countless tentacles. It is known that whoever pilots such a ship must have a close mental link with the strange creature whose body is used as a planar ship.

A renowned captain among the numerous crews that sail the Astral Sea once established a working relation­ship with a large crustacean creature, indigenous to the ethereal waters. Captain Gom Hudley crafted a nautiloid with the creature’s permission and, thus, gained access to a powerful ship. It became the flagship of his pirating organization. Other warring factions grew afraid of Cap­tain Gom’s vessel. It was called ‘Starry Horizon’.

The cryptic crustacean once heard the tale of a hidden place in the infinite Astral Sea where more of its kind were free to live in peace. It agreed to travel with Cap­tain Gom’s crew as long as the pirate captain pushed the boundaries of known star maps so that they could one day find the fabled home it heard about. The captain promised to look for the place and that their working re­lationship would end right then. The crustacean would be free to leave and stay with the rest of its kin.

Captain Gom Hudley’s possession of the priced ship did not go unnoticed. Multiple factions of pirates, brigands, and even merchant princes took a deep dislike. Born from envy and fear. Alas, a fleet of ships ambushed Star­ry Horizon and dealt lethal damage to the living vessel. Captain Gom managed to steer away from the conflict in a dying ship; looking for a safe harbor to rest and heal.

After Captain Gom was defeated, he laid low for weeks trying to heal the wounded crustacean with nat­ural and magical means. He exhausted all resources but the nameless crustacean perished, at least in some way.

Despite the creature’s untimely death, some of its parts remained active and life-like. The frontal tentacles appear to live, the outer shell continues to grow and secrete pro­tective oils, and the inner living walls continue to breathe in and out. Scholars and spellcasters who reviewed this phenomenon could not explain how the brainless crea­ture could still partially live. They theorized that the mag­ic engine that propels the vessel across the Astral Sea may have fused to some of those body parts, allowing them to cheat death. Still, those are only theories.

Captain Gom decided to keep looking for the strange place in hopes that the crustacean’s kin could find a way to heal it back to full health. The captain carried on with his pirate life for a few decades until he was wounded in the calf and had to forcefully retire. His pirate days were over. During these long years, Captain Gom expe­rienced vivid dreams where the crustacean would com­municate with him. It told him stories from the Astral Sea and thanked him for continuing the search for its an­cestral home. The captain believes that the creature can still communicate but dreams are the only means it can reach him. No one else has had these dreams, though.

The characters have grown in importance and reputa­tion in the area. So much so that Captain Gom Hudley has taken an interest in them. The retired adventurer summons the characters for an audience to offer them a once-in-a-lifetime opportunity. The pirate requests that they take the Starry Horizon and push the boundaries of the charted paths in the Astral Sea. They must travel far and wide in the hopes that they find a place where oth­er crustaceans like the one that the ship is made of live.

The pirate probably won’t be alive to witness their suc­cess. It is up to the characters to choose how to seek this place. Captain Gom trusts that the crustacean will com­municate with the new captain through dreams soon…

DC 14: The Starry Horizon is a popular vessel among the warring factions that sail the Astral Sea close to known locations in the charts. It is sure to attract un­wanted attention from all kinds of criminals.

DC 16: Nautiloids are rare. Apart from the Starry Hori­zon, there must be less than 10 in circulation. The en­gine requires refueling once a month. Missing this dead­line might cause the ship to drift into uncharted waters.

The nautiloid’s main deck’s surfaces and handrails are made from an artificial polymer that is as hard and dura­ble as tempered steel. The grated opening in the deck is the only way down to the lower deck (area 3).

There are two lateral harpoon guns and a front-facing one on the deck. A person can operate any of them to shoot ballista bolts or harpoons. Captain Gom used the harpoons numerous times to capture enemy vessels.

The crustacean’s conch shell varies in width but it is 2 feet wide at its narrowest point. It has a spiral shape with countless crenelations and naturally-occurring patterns. The shell bears the scars of countless battles. When the shell breaks, the creature’s healing mechanism fills the opening with molten silver and mother-of-pearl. The fine silvery cracks cover the entirety of the shell, contributing to its natural beauty and artistic imagery.

The flooring of the lower deck is formed from the crus­tacean’s lower body. The floor and the walls are alive. Toward the vessel’s bow, the floor and walls are divided into dozens of hardened tubes. They are the base of the nautiloid’s tentacles. Irregular vibrations from the tenta­cles’ involuntary movements can be felt at all times here.

Captain Gom Hudley moved to this room five years be­fore retiring after noticing that the dream communica­tion with the crustacean happened more often when sleeping here. Captain Gom believed that being closer to the creature’s base had such an effect but it was only a way to explain the enhanced dreaming.

Creatures that sleep here have their first oneiric vi­sion after a week. In this preliminary communication at­tempt, the crustacean displays images of its adventures with Captain Gom Hudley and of the fabled location that the captain and it have spent their lives looking for.

This is the ship’s cargo hold. Supply crates, barrels, and all manner of cargo are held here. The walls of this chamber move in and out as if breathing. The cycle lasts 5 minutes and the chamber becomes 20% smaller at the end of the cycle before reverting to its normal size.

The characters must understand the nature of the chamber to avoid their cargo being moved around at best, or crushed by the moving walls at worst.

The small room contains a weapons table and a small desk with entry journals and cargo manifestos. Two paintings decorate the walls of this chamber. The first one depicts Captain Gom holding a recently caught fish, as long as he is tall. The second painting portrays the Starry Horizon soaring through the skies.

A central chamber for resting or recreation. It contains a table with four wooden chairs. The walls are decorat­ed with hand-drawn images of Captain Gom and his crew, presumably. Etched on the stern wall is the phrase: “I promise you we will find it, take what it takes”.

This was Captain Gom’s cabin before he moved to the lower deck to better hear the cryptic messages that the crustacean sent him from time to time. A portrait of him, young and smiling, hangs on the wall. The character that takes the title of captain is expected to rest here. After using the cabin for at least three weeks, they experience their first communication dream. In it, the crustacean at­tempts to explain Captain Gom’s promise.

The four cabins can house up to three crew members with additional hammocks. Each of the cabins contains the bare necessities like a night table or a chest.

Three steel seats dominate the bridge, the central one is considerably larger than the others and is reserved for the nautiloid’s captain. The seats’ arms contain complex buttons and mechanisms to pilot the ship. The captain can perform all actions from the main seat but two other people can help with smaller tasks by using the second­ary seats. The shell’s outer casing bow-side features two one-way windows over the planar engines.

It is expected that a spelljammer captain is a spellcast­er but anyone familiar with sailing can use the seat con­trols to communicate with the ship and control it. Behind the control seats, there is a planning table with updated charts of the Astral Sea and numerous unexplored loca­tions near known regions. Captain Gom makes a point to gift these valuable maps to the character. The old pi­rate insists that the maps are priceless to an explorer.

Right under the control seats, the planar engines roar like thunder when the ship is ordered to achieve full speed. These delicate arcane devices are capable to pro­pel the ship through the Astral Sea and into the outer planes if needed. They are state-of-the-art magic devices that other vessel captains would kill to acquire. The Star­ry Horizon had a different engine originally but Captain Gom took these from a captured vessel 7 years ago.

The adamantine ingot, however, is a rare commodity that the ship’s captain must keep in mind at all times. It is a top priority to avoid running out of fuel.

Features of the Nautiloid

Smell and Sounds. The stench of shellfish permeates all areas but the odor becomes unnoticeable after a few hours on deck. The lulling sound of slow breathing from the walls and lower deck can be heard in any area.

Lights. The sconces feature continual flame spells. The magic fades in seconds after the torches are removed.

Magical Censor. The ship recognizes its crew mem­bers. Other creatures that attempt to cast a spell while on the ship are hit by arcane noise that causes them to lose the spell and miss (DC 16 Concentration). In addi­tion charm spells from all sources automatically fail.

Enhanced Healing. Rest within the quarters is mag­ically enhanced. Creatures gain advantage on saving throws against diseases and poisons.

Self-Healing. The living parts that remain (shell, ten­tacles, walls) heal at a fast rate. Deep cracks, tears, or holes seal up and heal within 1 or 2 weeks. 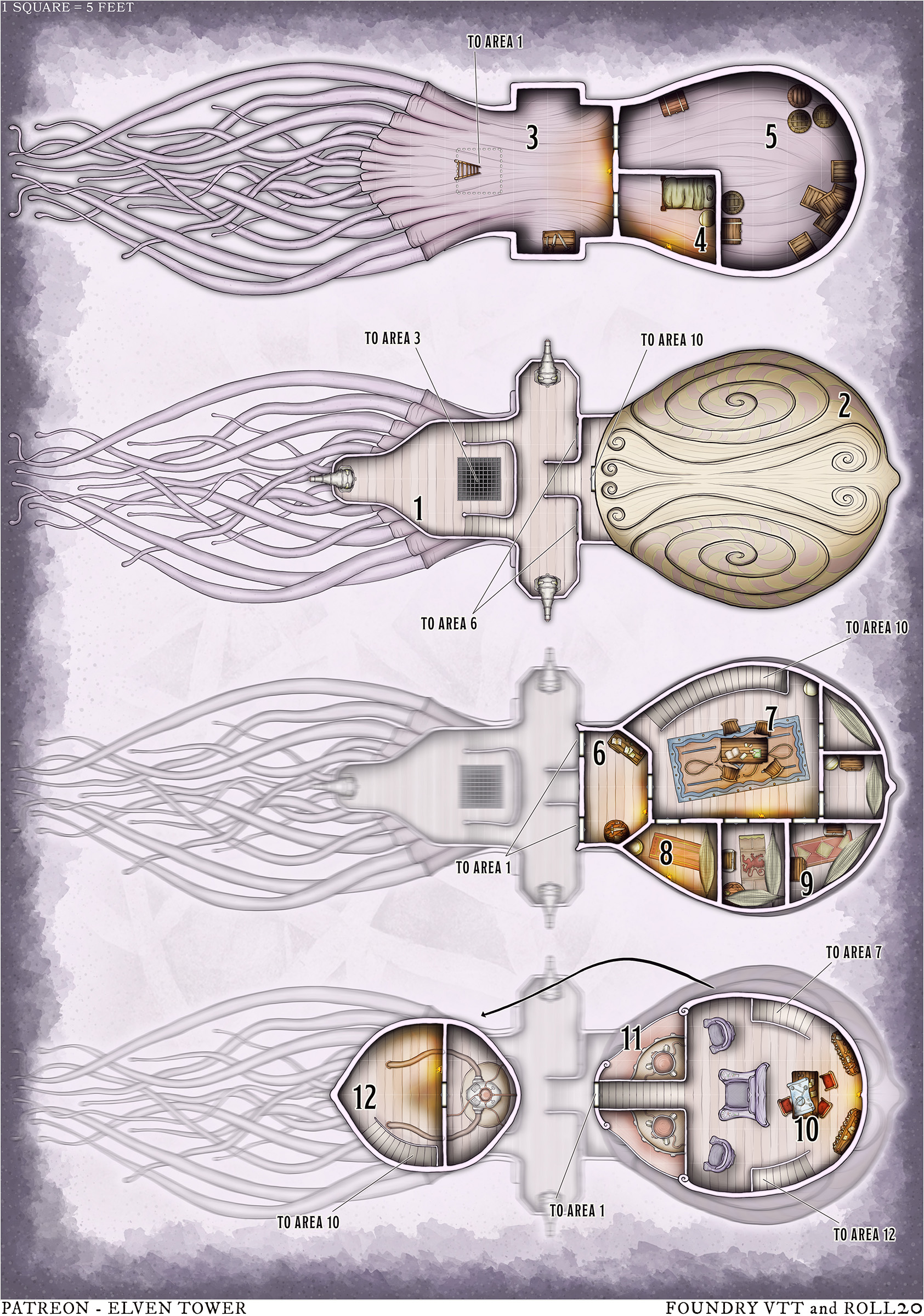