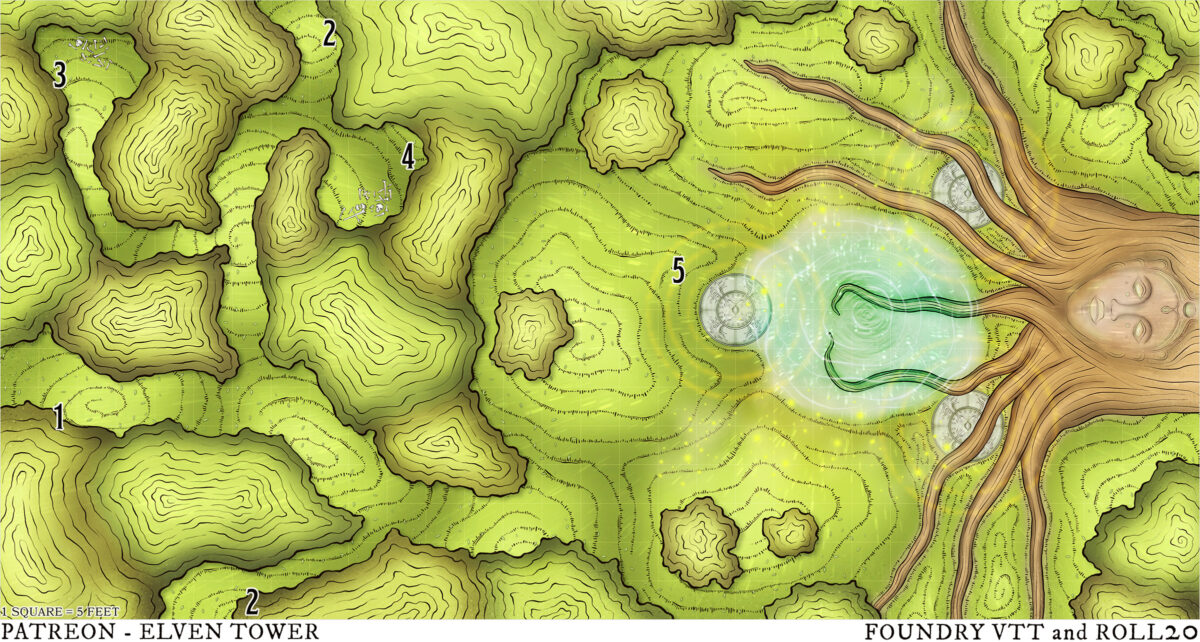 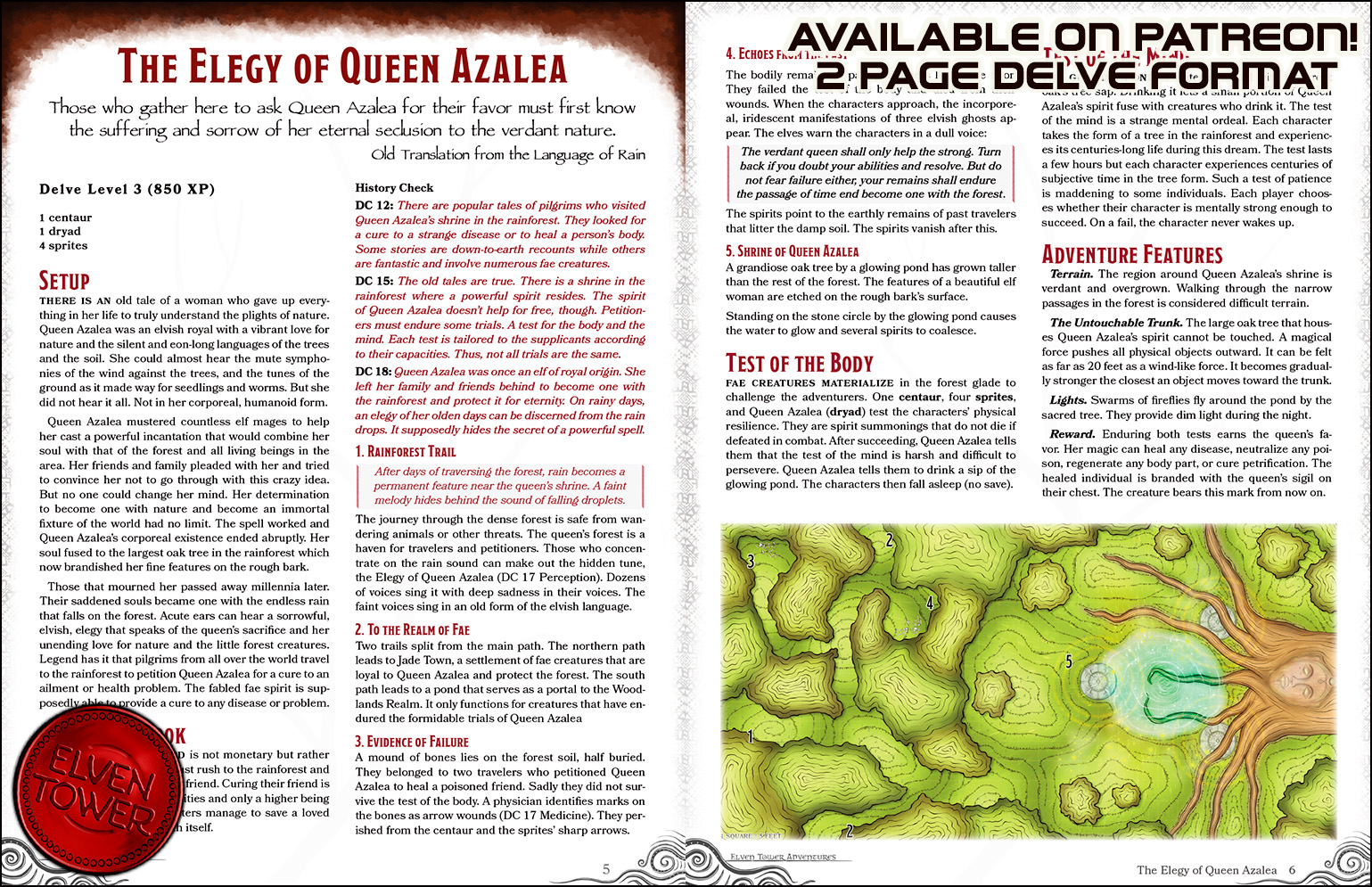 Those who gather here to ask Queen Azalea for their favor must first know the suffering and sorrow of her eternal seclusion to the verdant nature.

Old Translation from the Language of Rain

There is an old tale of a woman who gave up every­thing in her life to truly understand the plights of nature. Queen Azalea was an elvish royal with a vibrant love for nature and the silent and eon-long languages of the trees and the soil. She could almost hear the mute sympho­nies of the wind against the trees, and the tunes of the ground as it made way for seedlings and worms. But she did not hear it all. Not in her corporeal, humanoid form.

Queen Azalea mustered countless elf mages to help her cast a powerful incantation that would combine her soul with that of the forest and all living beings in the area. Her friends and family pleaded with her and tried to convince her not to go through with this crazy idea. But no one could change her mind. Her determination to become one with nature and become an immortal fixture of the world had no limit. The spell worked and Queen Azalea’s corporeal existence ended abruptly. Her soul fused to the largest oak tree in the rainforest which now brandished her fine features on the rough bark.

Those that mourned her passed away millennia later. Their saddened souls became one with the endless rain that falls on the forest. Acute ears can hear a sorrowful, elvish, elegy that speaks of the queen’s sacrifice and her unending love for nature and the little forest creatures. Legend has it that pilgrims from all over the world travel to the rainforest to petition Queen Azalea for a cure to an ailment or health problem. The fabled fae spirit is sup­posedly able to provide a cure to any disease or problem.

This adventure reward is not monetary but rather magical. The characters must rush to the rainforest and carry an ill party member or friend. Curing their friend is out of the scope of their abilities and only a higher being can help them. The characters manage to save a loved one from the grasp of death itself.

DC 12: There are popular tales of pilgrims who visited Queen Azalea’s shrine in the rainforest. They looked for a cure to a strange disease or to heal a person’s body. Some stories are down-to-earth recounts while others are fantastic and involve numerous fae creatures.

DC 15: The old tales are true. There is a shrine in the rainforest where a powerful spirit resides. The spirit of Queen Azalea doesn’t help for free, though. Petition­ers must endure some trials. A test for the body and the mind. Each test is tailored to the supplicants according to their capacities. Thus, not all trials are the same.

DC 18: Queen Azalea was once an elf of royal origin. She left her family and friends behind to become one with the rainforest and protect it for eternity. On rainy days, an elegy of her olden days can be discerned from the rain drops. It supposedly hides the secret of a powerful spell.

After days of traversing the forest, rain becomes a permanent feature near the queen’s shrine. A faint melody hides behind the sound of falling droplets.

The journey through the dense forest is safe from wan­dering animals or other threats. The queen’s forest is a haven for travelers and petitioners. Those who concen­trate on the rain sound can make out the hidden tune, the Elegy of Queen Azalea (DC 17 Perception). Dozens of voices sing it with deep sadness in their voices. The faint voices sing in an old form of the elvish language.

A mound of bones lies on the forest soil, half buried. They belonged to two travelers who petitioned Queen Azalea to heal a poisoned friend. Sadly they did not sur­vive the test of the body. A physician identifies marks on the bones as arrow wounds (DC 17 Medicine). They per­ished from the centaur and the sprites’ sharp arrows.

4. Echoes from the Past

The bodily remains of past petitioners lie on the floor. They failed the test of the body and died from their wounds. When the characters approach, the incorpore­al, iridescent manifestations of three elvish ghosts ap­pear. The elves warn the characters in a dull voice:

The verdant queen shall only help the strong. Turn back if you doubt your abilities and resolve. But do not fear failure either, your remains shall endure the passage of time end become one with the forest.

The spirits point to the earthly remains of past travelers that litter the damp soil. The spirits vanish after this.

A grandiose oak tree by a glowing pond has grown taller than the rest of the forest. The features of a beautiful elf woman are etched on the rough bark’s surface.

Standing on the stone circle by the glowing pond caus­es the water to glow and several spirits to coalesce.

Test of the Body

Test of the Mind

The glowing pond of water is mixed with the great oak’s tree sap. Drinking it lets a small portion of Queen Azalea’s spirit fuse with creatures who drink it. The test of the mind is a strange mental ordeal. Each character takes the form of a tree in the rainforest and experienc­es its centuries-long life during this dream. The test lasts a few hours but each character experiences centuries of subjective time in the tree form. Such a test of patience is maddening to some individuals. Each player choos­es whether their character is mentally strong enough to succeed. On a fail, the character never wakes up.

Terrain. The region around Queen Azalea’s shrine is verdant and overgrown. Walking through the narrow passages in the forest is considered difficult terrain.

The Untouchable Trunk. The large oak tree that hous­es Queen Azalea’s spirit cannot be touched. A magical force pushes all physical objects outward. It can be felt as far as 20 feet as a wind-like force. It becomes gradual­ly stronger the closest an object moves toward the trunk.

Lights. Swarms of fireflies fly around the pond by the sacred tree. They provide dim light during the night.

Reward. Enduring both tests earns the queen’s fa­vor. Her magic can heal any disease, neutralize any poi­son, regenerate any body part, or cure petrification. The healed individual is branded with the queen’s sigil on their chest. The creature bears this mark from now on. 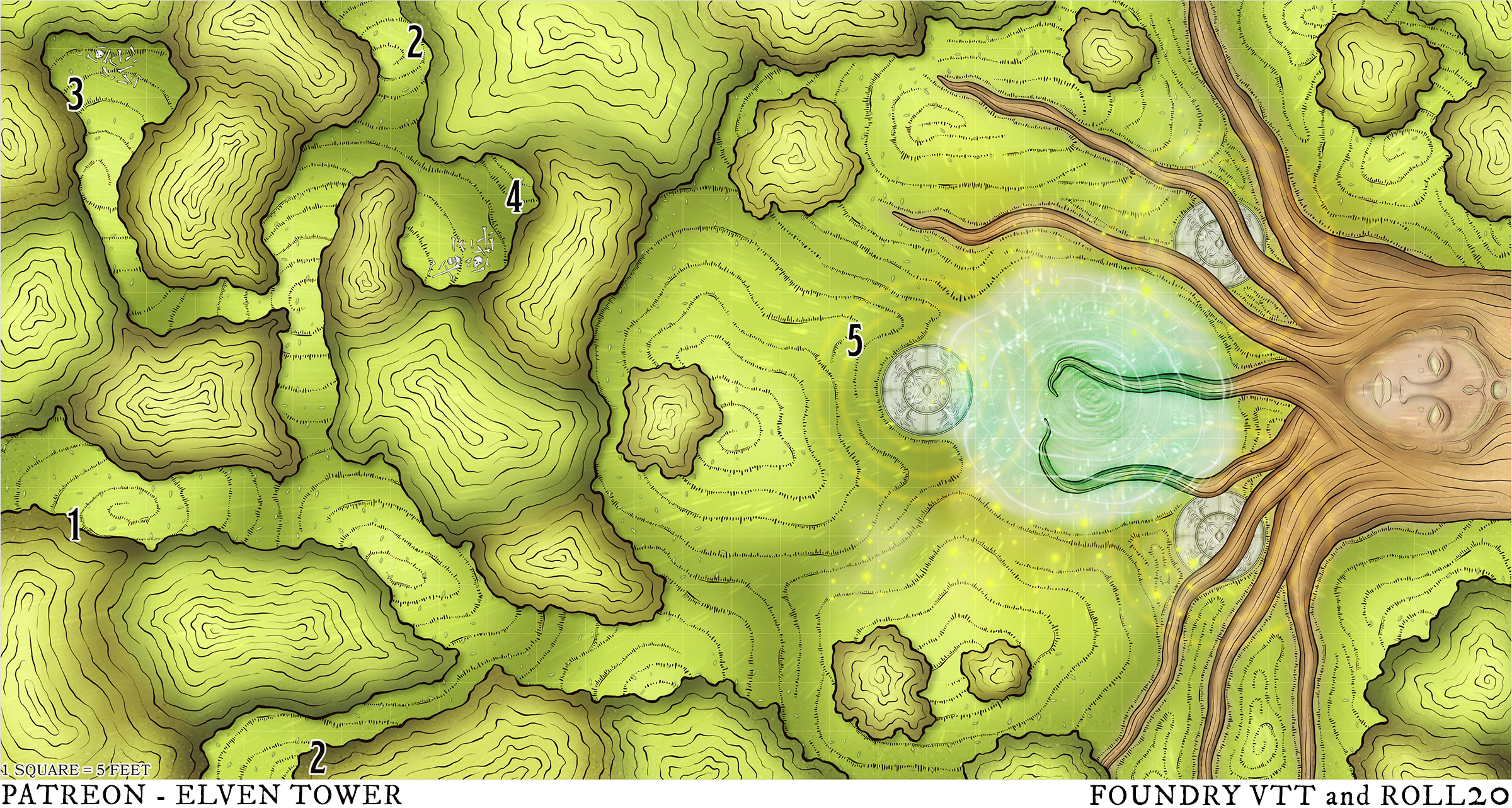